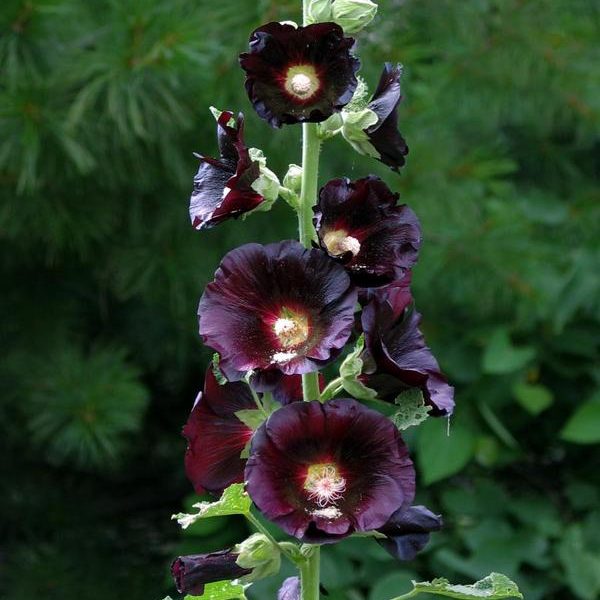 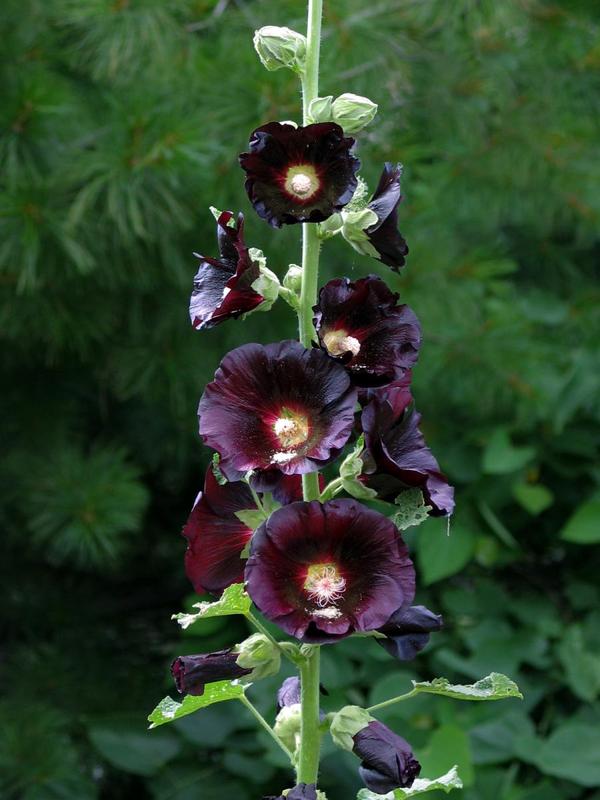 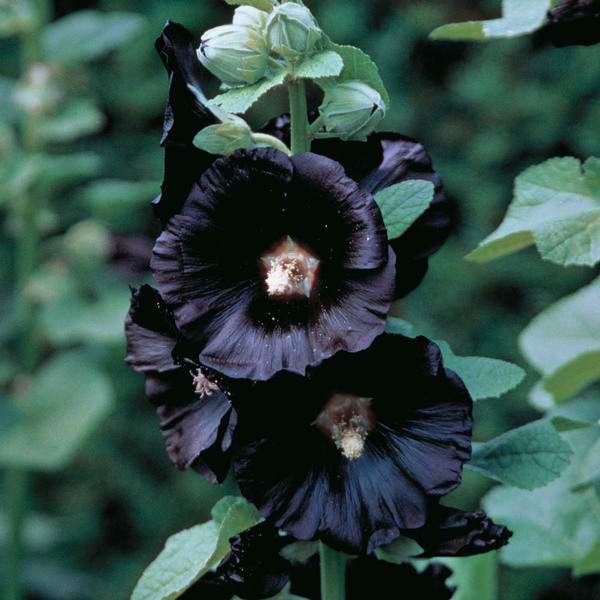 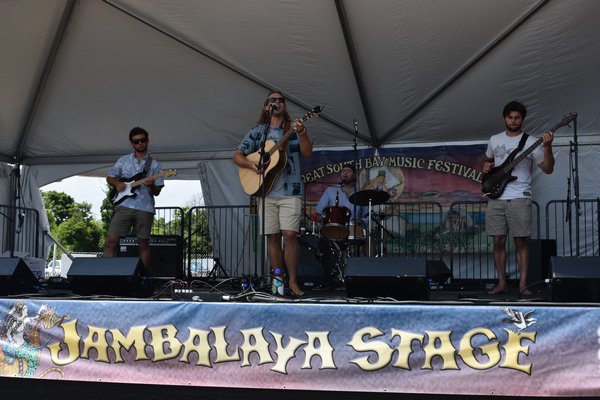 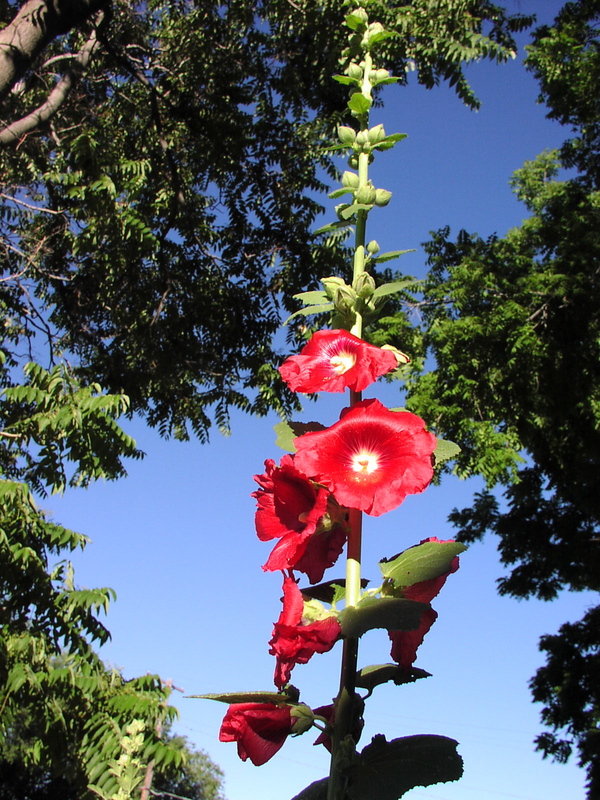 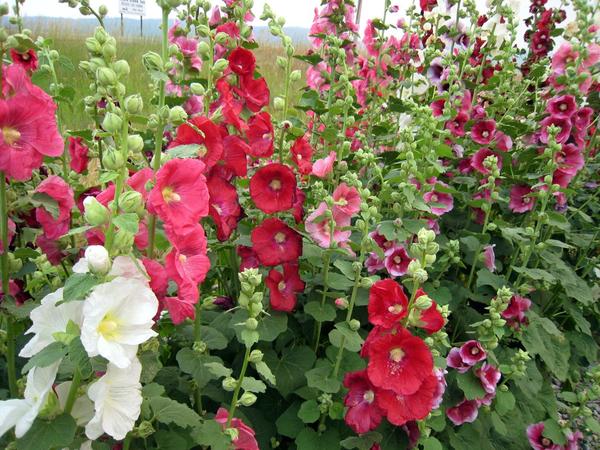 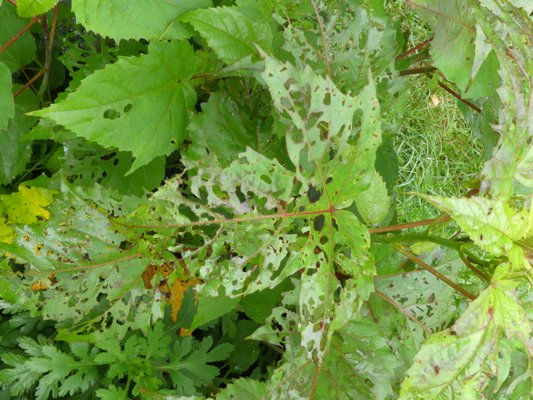 Foliage on the perennial hibiscus "Cherry Brandy" has been Swiss-cheesed by Japanese beetles. ANDREW MESSINGER

If ever there was a garden plant that your grandparents or even your great-grandparents grew, it was a hollyhock.

So imagine my surprise when I picked up the new Wayside Gardens catalog to see that the company is offering plants of Chater’s Double Mix, a longtime favorite, but refers to them as “new.” In the online catalog, you can click on the “new” button to see what this symbol means. Well, according to the legend it means ”Great products that have just been introduced.”

Shame on Wayside. Not only have hollyhocks been grown in our gardens for hundreds of years but the Chater’s double strain probably goes back to the 1800s. New? I don’t think so.

But for many, hollyhocks are new. Like many garden plants, this one has had its ups and its downs. I’ll get into the reasons later, but for now keep in mind that hollyhocks are becoming very popular again.

They make a wonderful plant that can be easily grown from seed, purchased in pots and even in full bloom. Hollyhocks make a great statement in groupings or as a specimen plants. And their colorful flowering spires begin to appear in early summer and can go on for weeks and weeks or even months.

One of the confusing aspects of hollyhocks—or more correctly the genus “alcea” and a few close relatives called “altheas”—is their classification. Some catalogs classify them as biennials while others classify them as perennials. Some of the confusion comes about because of the way biennials grow and reproduce. And there may actually be some in the family that are true perennials, but for the most part they are true biennials that seem to act like perennials.

As a result of all the glorious blooms, hollyhocks produce lots and lots of seeds. The seeds can be collected and used for the next crop, and inevitably a few will drop to the ground and sprout new plants, which in turn will bloom in two years.

Now occasionally, a hollyhock will bloom for two summers. This is where things get confusing. Having done this, it’s no longer a true biennial but a short-lived perennial.

But something else happens. The blooms from the flowers during the second year have produced plants that are growing but not blooming the third year. The original plant that bloomed the second and third year is now dropping more seed, and as a result, if the plants are permitted to grow in situ, hollyhocks will be in bloom every year instead of every other year as the dictates of biennialism would otherwise indicate.

So, for the novice, it appears that the plant is blooming every year when it’s actually the progeny that’s blooming and not the parent. Confused?

It can get even more confusing if you go to a garden center and buy a hollyhock in a 1- or 2-gallon pot in late May that’s in full bloom. You go home and plant it, but then next year, nothing.

Remember that in order for the plant to bloom it’s already two years old so you’re probably planting a hollyhock whose obit has already been written. Next year, in 2013, you’ll go to find the plant in the garden and it’s gone. Ah, but look more closely and you’ll probably find the seedlings from the seeds dropped by the parent plant, which will bloom in 2014.

Now if you’re not thoroughly confused, there are a few varieties of hollyhock that are reputed to bloom the first year from seed.

Alcea zebrina, sometimes sold as althea zebrina, is often sold as a perennial but I don’t think it is. And when I used to grow it, I could never get it to overwinter. I think of this one as a possible winter-hardy annual, which will grow from seed and flower the first year and drops its seeds.

In a mild winter, the seeds will remain viable and grow new plants in the same location the following year. It’s an attractive plant about 2 feet tall with purple to maroon 1-inch flowers that have darker stripes, thus the name “zebrina.”

Alcea nigra is another variety that’s probably biennial. It’s one of the more striking hollyhocks. The flowers are about 6 inches across and are a very dark maroon, growing to about 8 feet tall.

Again, it’s sold as a perennial but is a biennial. It’s also sold under other names such as The Watchman, Black Beauty, After Midnight and Arabian Night but they’re all the same plant, though different strains will show some variation in color.

Alcea rugosa, or the Russian Hollyhock, is probably one of the few true perennial hollyhocks. Instead of growing in single spikes like the roseas, this one has a bushier habit with multiple stems and buttery yellow flowers on 6- to 7-foot spires.

Possibly related is the alcea ficifolia, which is known as the Antwerp or figleaf hollyhock. This one also has a single yellow flower but on single spires instead of a bushy habit. It’s also reputed to be a true perennial, and if the seed is sown indoors early, it will flower the first year from seed.

The hollyhocks are really great garden plants and fit well in the perennial border, cottage garden or even the cutting garden. But they are not without their problems and the problems usually show up in the second year. By no means though is this a reason not to grow them, so next week we’ll get into the little quirks of hollyhock culture.

In the meantime, buy some seeds, get a few plants going and next week we’ll explore further. Keep growing.