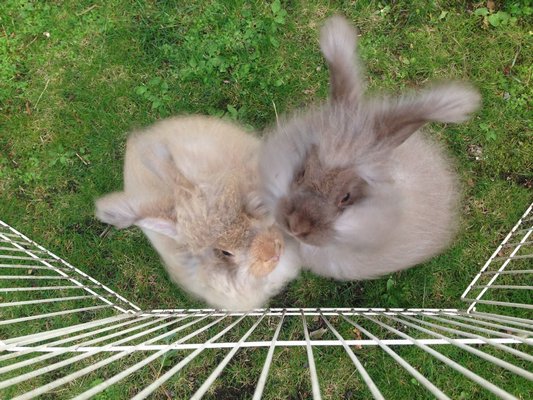 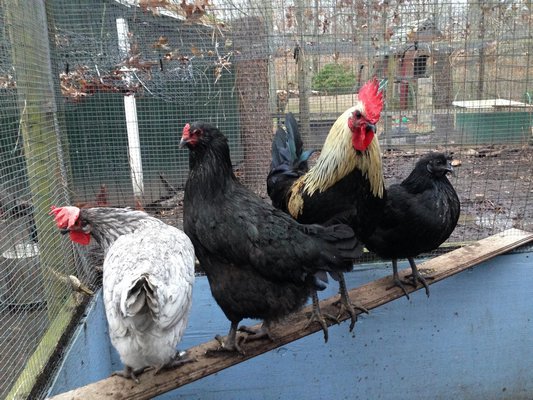 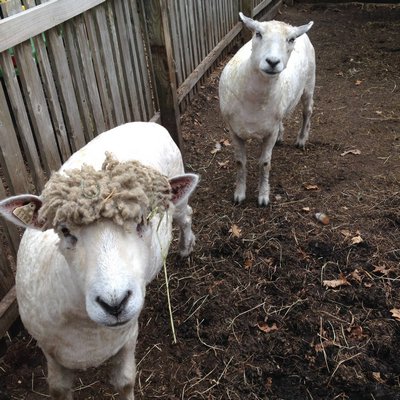 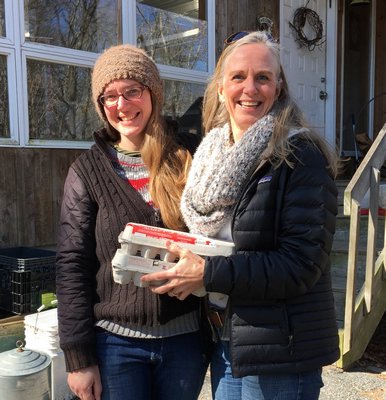 Rachel Stephens and one of her customers, Dr. Stephany Meng. LISA DAFFY 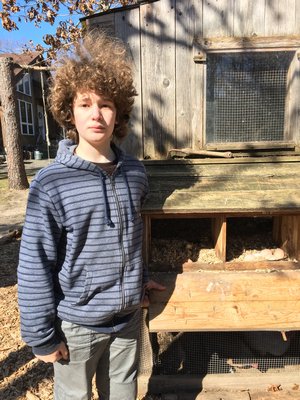 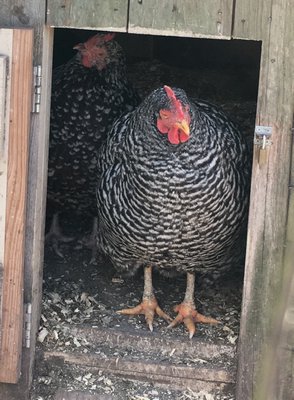 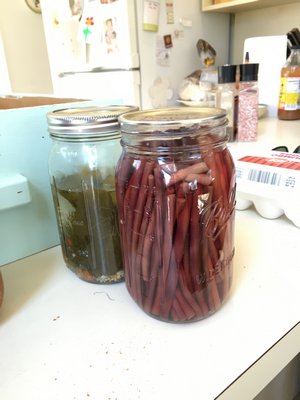 Canned beans and pickles from the Stephenses' garden. LISA DAFFY 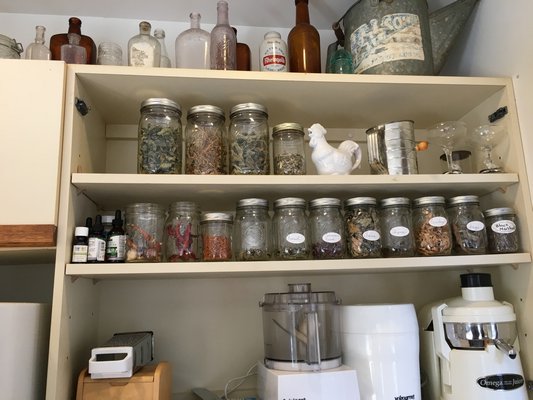 Jars of dried herbs from the Stephenses' garden. LISA DAFFY 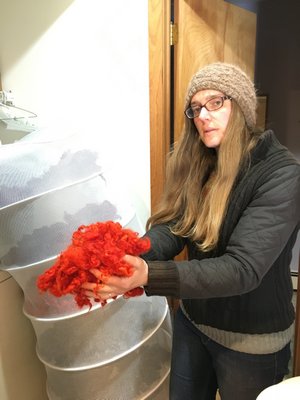 Rachel Stephens with some brightly dyed wool from Kelly and Belle. LISA DAFFY 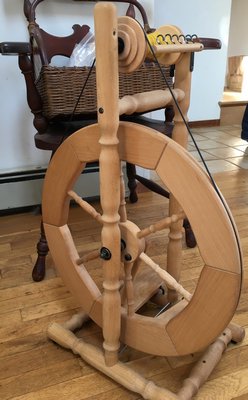 Rachel Stephens spins yarn from the wool of her sheep and rabbits. LISA DAFFY 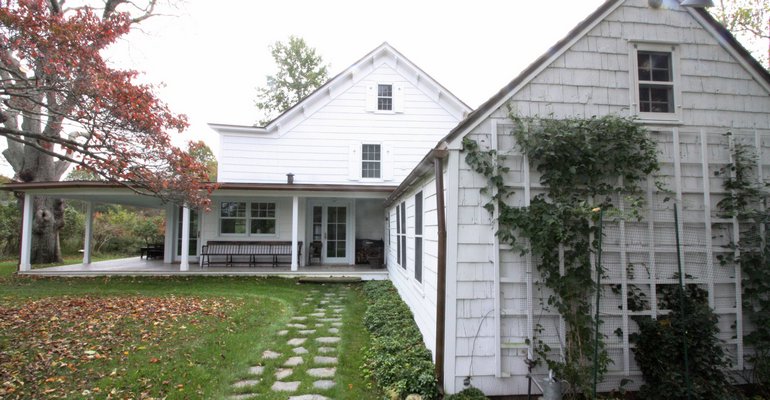 Home-spun wool is used to make hats, scarves and other clothing for the family. LISA DAFFY 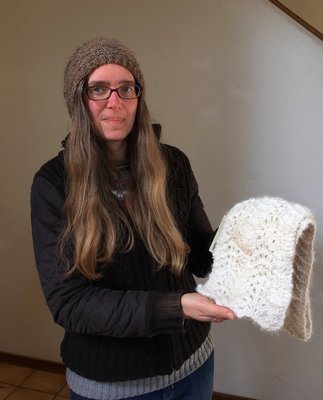 Rachel Stephens showing off a hand-crafted scarf she made from homegrown wool. She also made the hat she’s wearing. LISA DAFFY 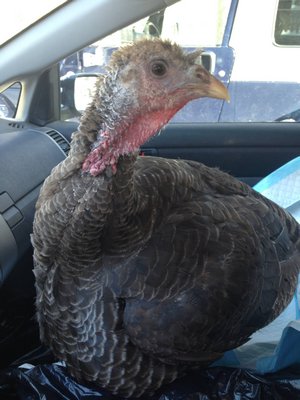 Billie, the Stephenses’ pet turkey, on her way to the vet. COURTESY RACHEL STEPHENS

“Johnny Cash is in with the ducks again,” Rachel Stephens says—to the confusion of a visitor, looking around for the Man in Black. Instead, she spies a gregarious black rooster making his way from the chicken pen into the duck pen, which he does whenever the opportunity arises.

Ms. Stephens is a self-described homesteader, part of a growing movement of people declaring independence from corporate providers of everything from food to electricity. As a rule, we’re not talking about survivalists stocking underground bunkers with shelves full of canned goods and generators. The homestead movement, particularly on the East End, is focused more on seeking a healthier, more connected way to live.

“To me, being a homesteader means you’re trying to live your life as sustainably and self-sufficiently as possible,” Ms. Stephens explains. “It’s partially about looking for ways to save money, but it’s more about doing what’s healthier for your family, knowing where your food is coming from.”

Rachel Maris, whose Long Island Homesteading Forum on Facebook boasts nearly 1,400 members, says homesteading can cover everything from growing your own vegetables to converting your house to solar power. “It’s really about learning how to be as self-reliant as possible. It’s a huge, broad topic.

“It’s not about being separate from the community,” she continues. “I’ve found people in the homesteading community really support each other, and are happy to teach other people.

“You can’t be entirely self-reliant. You need a community. We share ideas, some people know more than others. I make soap from scratch, and I post ideas and instructions for that.

“We trade items a lot of the time,” she continues. “You can’t sell dairy products, for example, but people trade things all the time. Everybody saves seeds, and the Long Island Regional Seed Consortium has an awesome seed swap in Riverhead every year that a lot of people in our group go to. This is a big movement in Long Island.”

On 2 acres adjacent to a nature preserve in Hampton Bays, the Stephens family’s Sweet Woodland Farm covers a lot of homesteading ground. Two ewes and three Angora rabbits provide wool for hats and scarves, a flock of guinea hens controls ticks, ducks and chickens share their eggs, and beehives supply honey as well as pollination services for the expansive vegetable garden. It didn’t start out this way.

“A friend of mine gave me a book called ‘Animal, Vegetable, Miracle,’” says Ms. Stephens. “She warned me that it would change my life, and it did. It’s the story of a family who sells their home and travels out into rural America and learns how to live off the land.

“After I read the book I asked my husband, ‘May I please have chickens?’ and he said no. I went to Agway and got seven chicks anyway.”

“We have 50 now,” she admits sheepishly.

Part of the reason for the explosive chicken situation is that hens lay eggs for only two to three years, but may live 10 years or more. Sweet Woodland Farm has turned into a retirement home for chickens. “I don’t eat my animals,” says Ms. Stephens, a vegetarian. “Once you give them a name, it’s a whole other story. I do have friends who process and eat their own birds, and I have great respect for them.”

“It’s chicken math,” explains Tracy McLaren of Southampton, who also has a growing flock. “Once you have more than four, you just keep getting chickens.

“A lot of people keep track of how much they spend, and if the chicken isn’t carrying its own weight, they cull the chicken,” she explains. “I can’t do that. I love my chickens. I go outside and I call, ‘Girls!’ and they all come running and jump on me.”

Ms. McLaren can’t even bring herself to eat the eggs her girls lay, so she gives them away to friends. “It makes me very happy to give them away because I know it’s cutting down on the number of factory-farmed eggs people are buying.”

In what turns out to be an excellent symbiotic relationship, guinea hens also act as an alarm system, shrieking when a hawk appears. “They sound the alarm and everyone runs for cover,” says Ms. McLaren.

Edging sideways into homesteading seems to be the normal route. Ms. Maris, who lives in East Moriches, said the back-to-nature urge came to her when she was pregnant with her first child, Sude, and has only grown stronger since. She lives with her husband, Ulas, and in-laws, and credits her Turkish mother-in-law, Yildiz, with teaching her many homesteading skills.

“I learned how to make yogurt from her, and cheese. And she’s an exquisite knitter. Getting to know her made me want my children to learn from her. I never had those skills; I’ve been learning as I go,” Ms. Maris says.

“I like to think of myself as a radical homemaker,” she says, noting that some people look down on the idea of a woman identifying herself as a homemaker. But raising—and homeschooling—five children, as Ms. Maris does, is more demanding than an office job. “Homesteading is about being self-reliant and empowerment, and what’s more empowering than bringing up a child from seed to blooming into maturity?”

She expresses dismay by the disconnect most Americans have between their diet and its origins. “My sister and I were walking in my garden once and she saw a carrot and said to me, ‘Don’t they grow on bushes?’ A woman at my yard sale once said in surprise, ‘Chickens come from eggs?’ I find that people are becoming disconnected and I think that’s given rise to the homesteading movement.”

While homesteading generally brings a low-tech lifestyle to mind, some East Enders are taking a distinctly modern route. Dr. Stephen Braun of Southampton installed solar panels on his home two years ago, and he and his wife, Jane, drive electric cars.

“We’re not off the grid, but we’re able to produce most of the electricity we use—around a megawatt per month right now,” he says. “On days when we make more than we use, the surplus gets fed into the electric grid, and we get a credit for that. At the end of the month, you either get charged if you used more power than you produce, or you get a credit if you use less.

The Brauns also grow a lot of their own produce, with fruit trees, kale, tomatoes and corn thriving in the backyard.

If you’re tempted by the idea of homesteading but not sure where to begin, chickens are a good starting point. In addition to providing eggs, they provide manure, which is wonderful garden fertilizer. Once the coop is built, Ms. Stephens says, caring for chickens takes about 10 minutes a day.

She’ll be holding her Backyard Chickens Fair this Saturday, March 19, from noon to 3. The fair is an opportunity to meet the animals, shop for handcrafted items, and watch a presentation on raising chickens at 1 p.m. There’s a $10 admission charge, and children under 12 can attend for free.