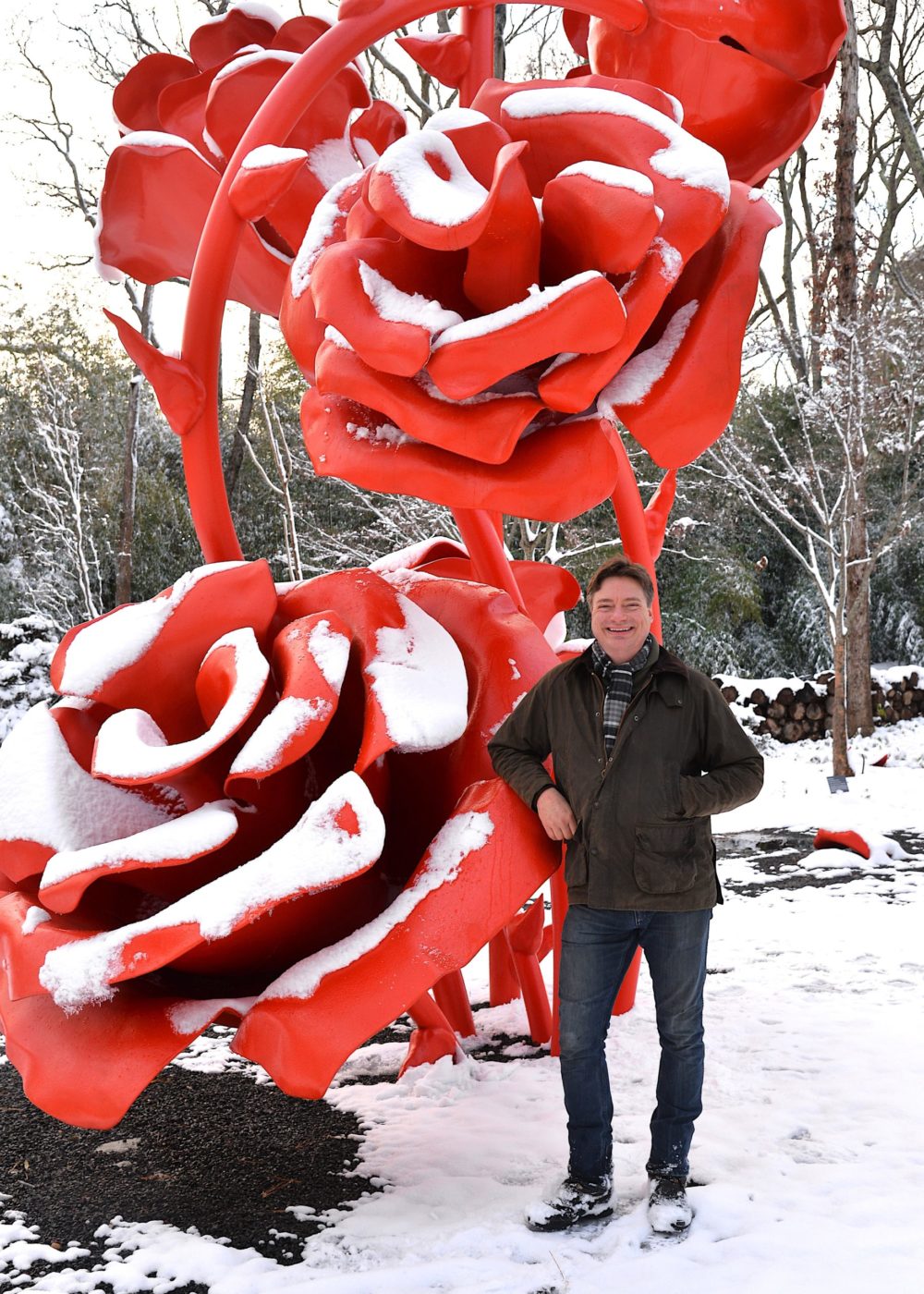 Holger Winenga, the horticulturist for LongHouse Reserve, with "LongHouse 6" a sculpture by Will Ryman. KYRIL BROMLEY 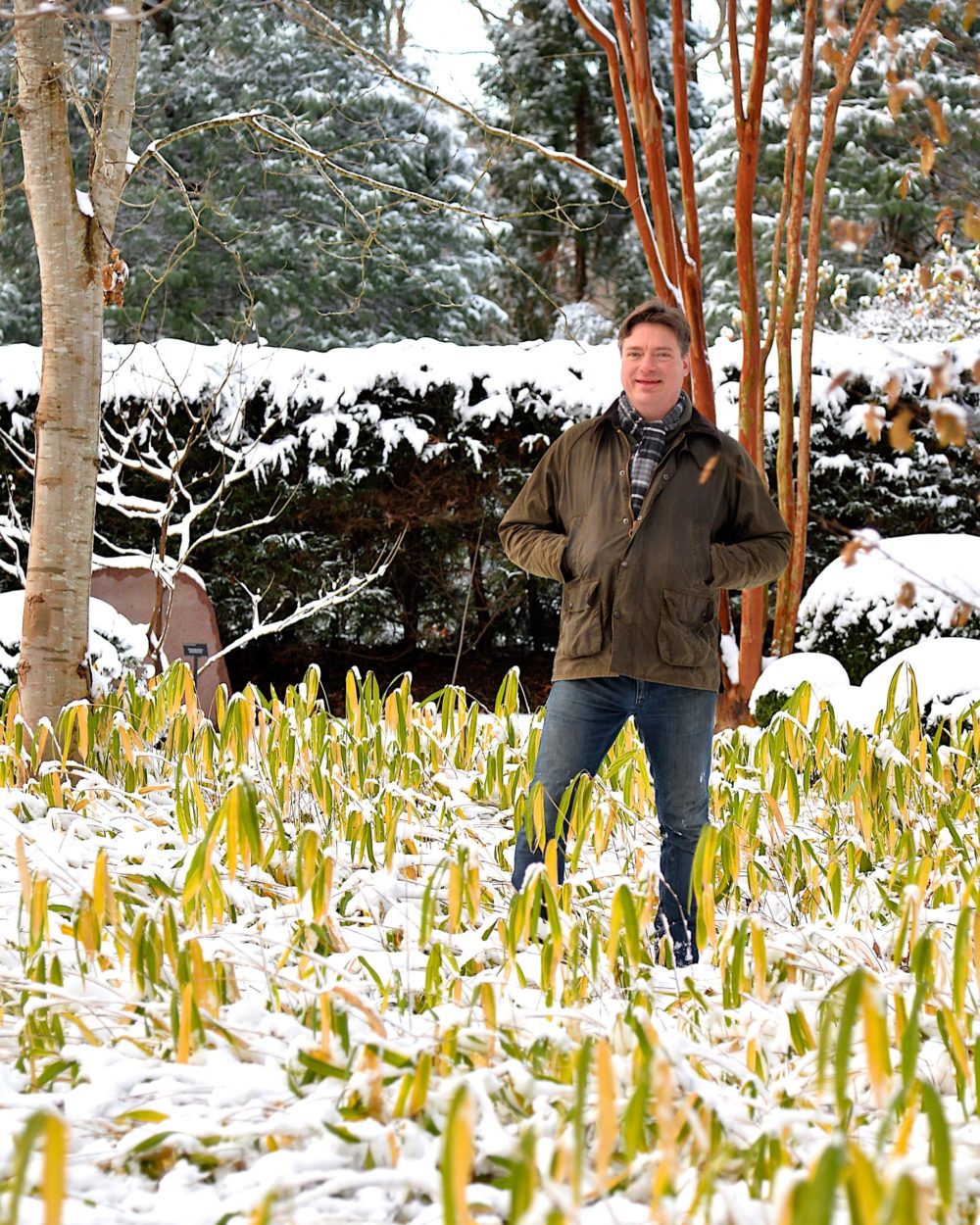 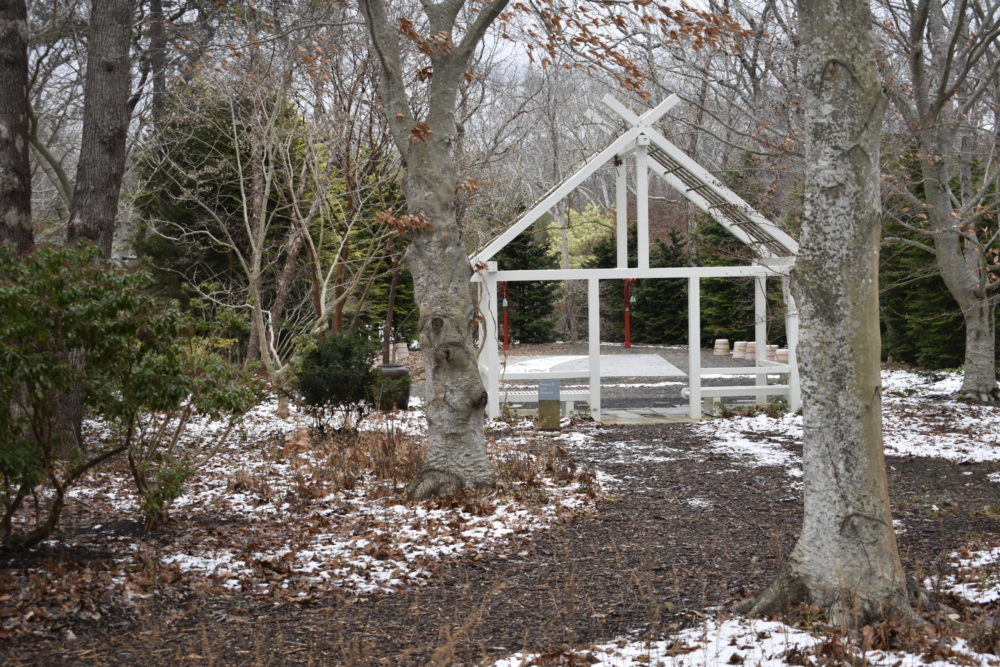 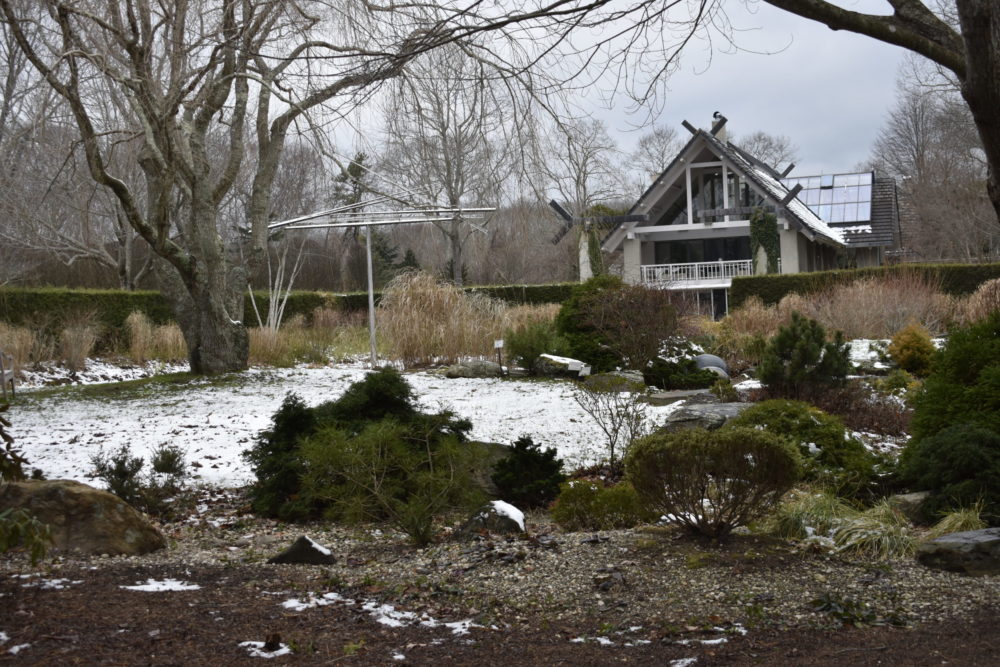 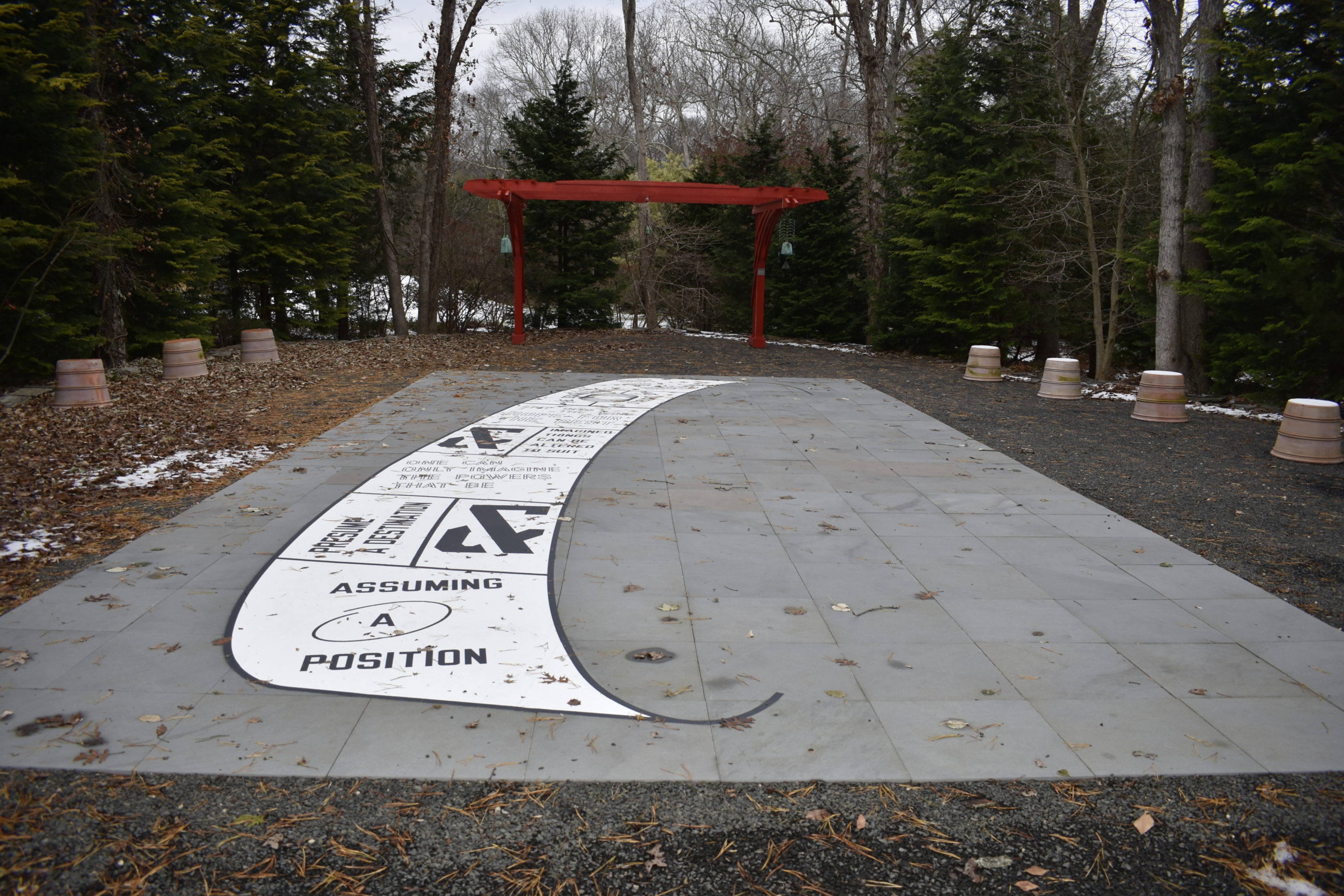 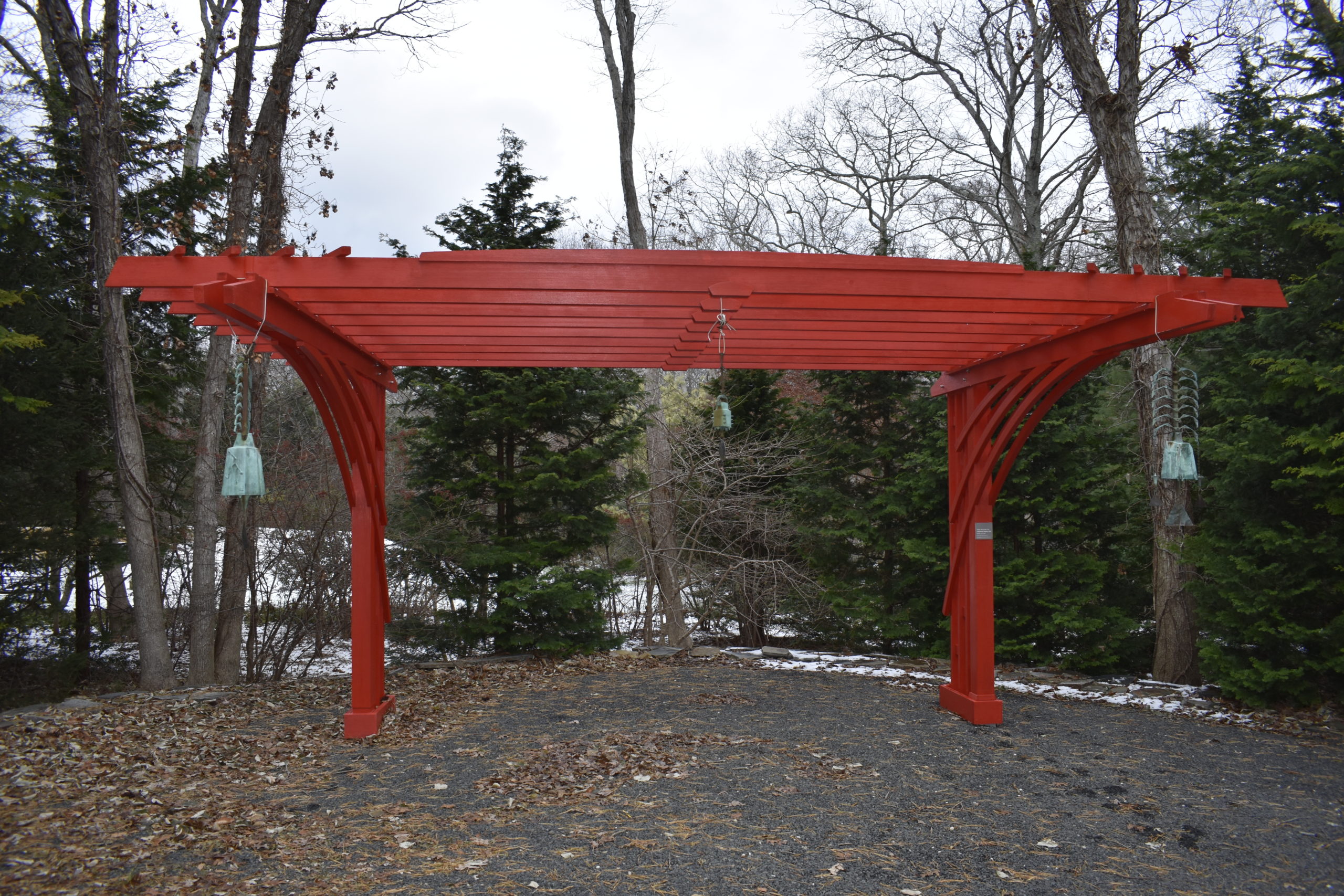 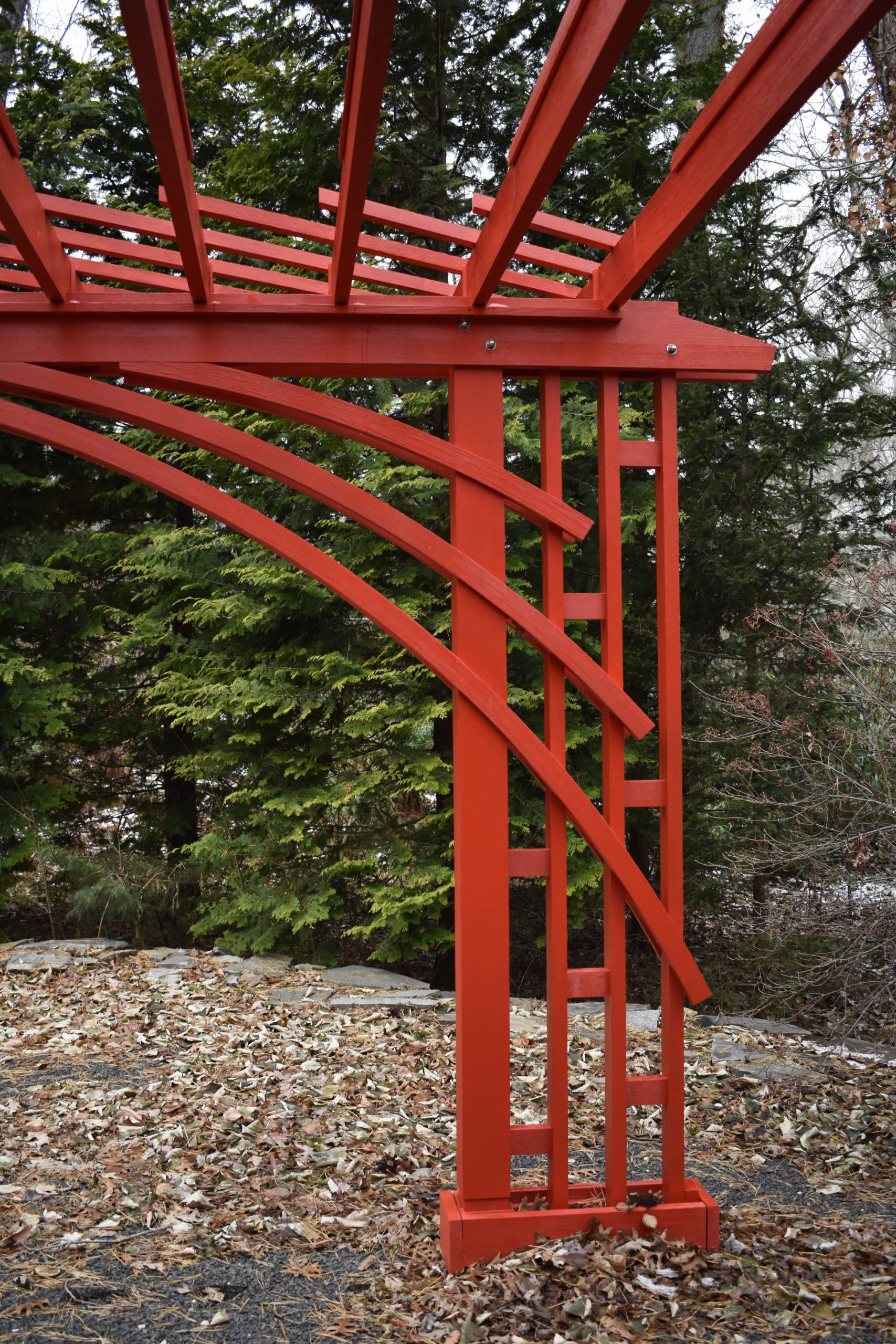 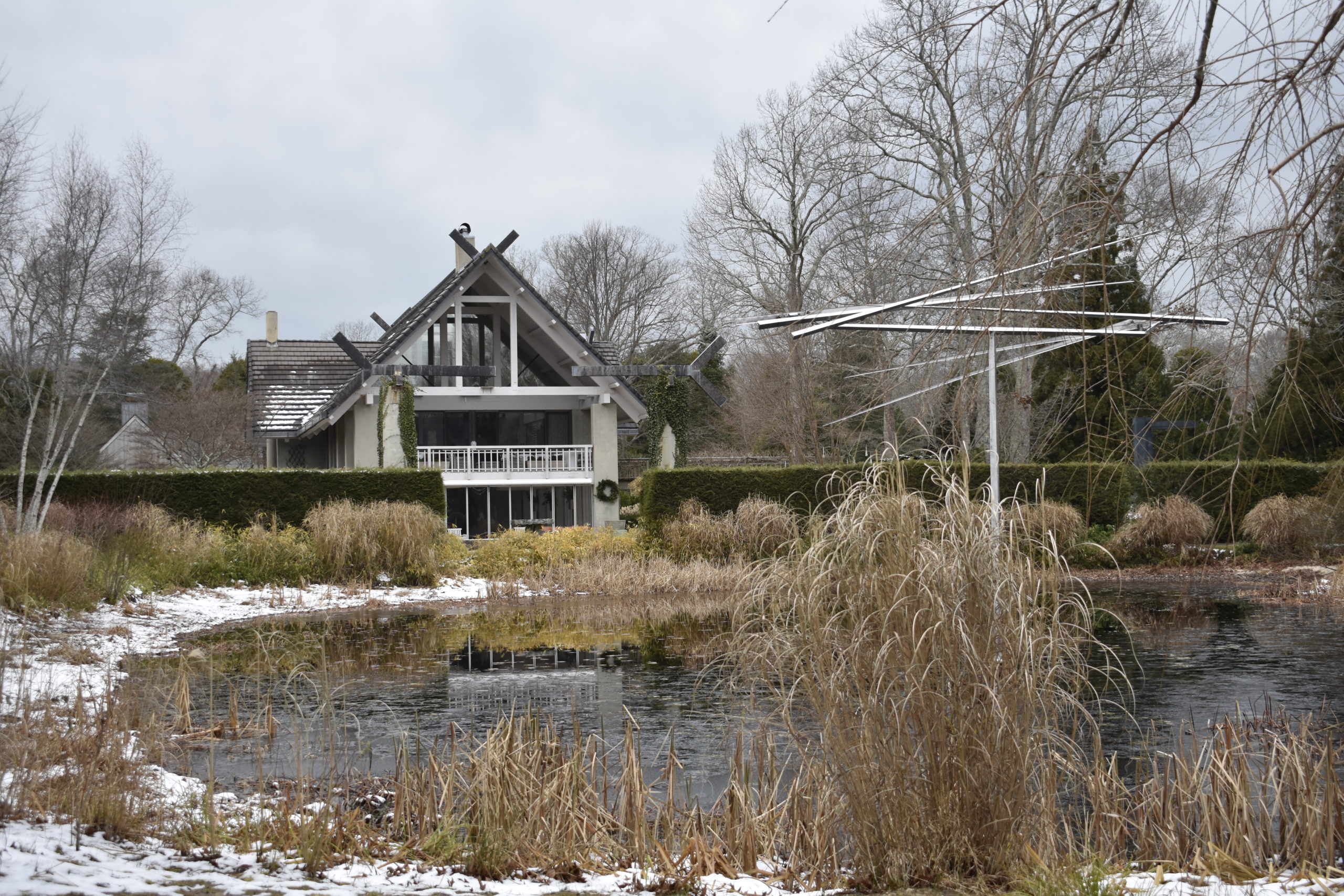 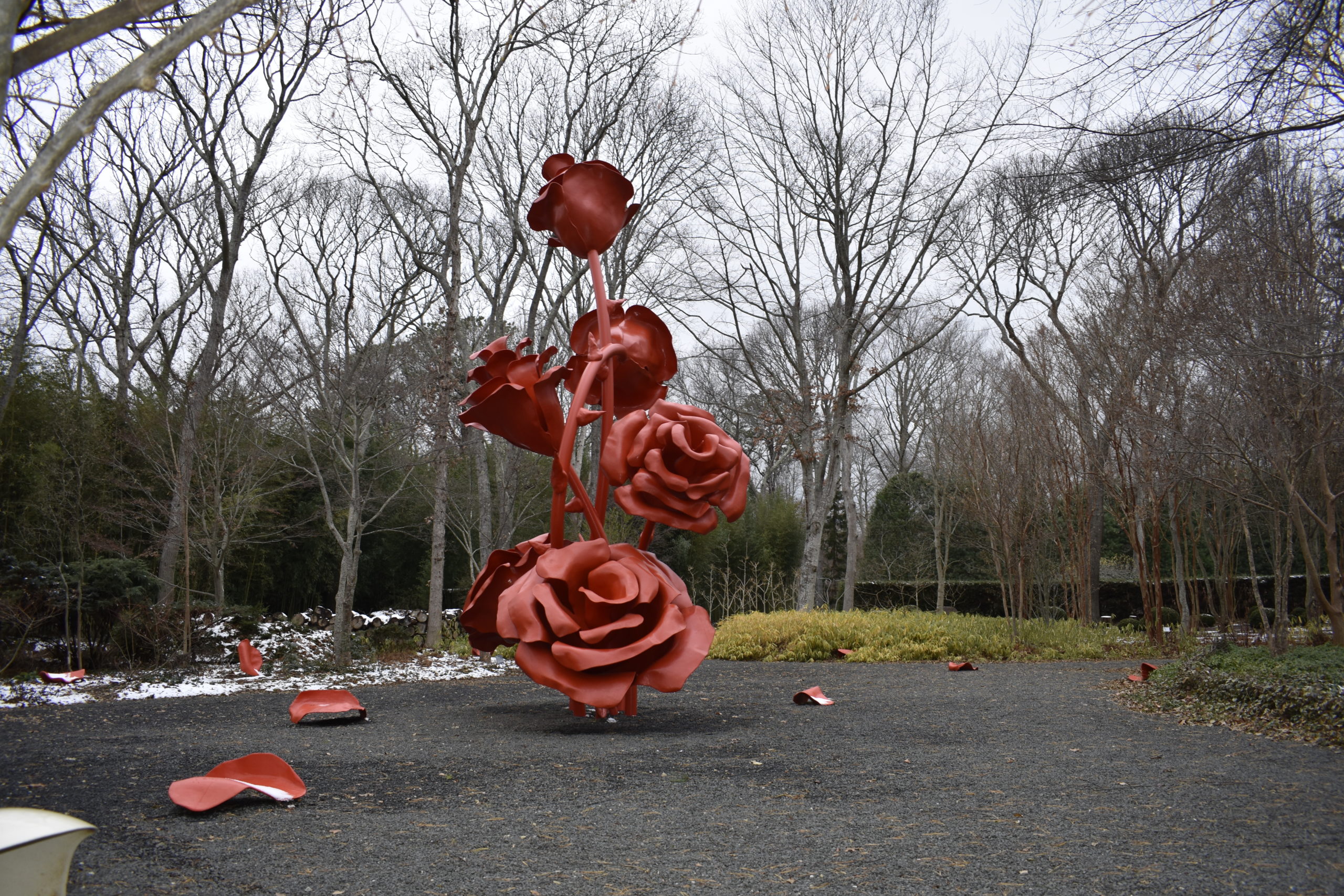 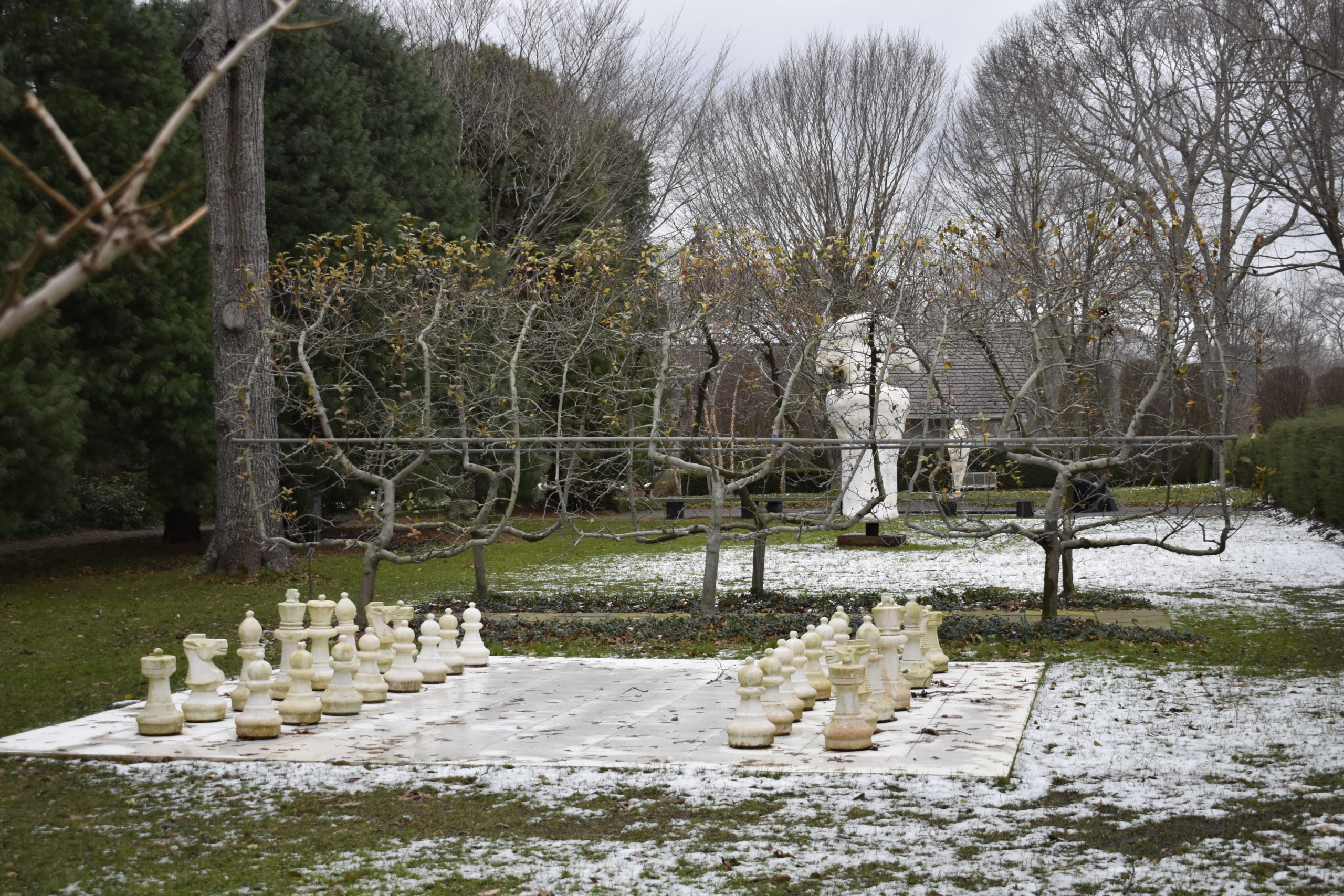 LongHouse Reserve may be closed to the public this time of year, but that doesn’t mean it’s gone quiet.

As long as weather allows, work continues at the 16-acre sculpture garden founded by textile designer Jack Lenor Larsen in East Hampton. There’s pruning to be done to maintain and enhance the beauty of the gardens, leaves to rake, and plans to make for the spring, explained Holger Winenga, the reserve’s new horticulturist, as he walked from garden to garden earlier this month.

“We’re in the process now of cleaning all the deadwood out of evergreens, and a lot of pruning,” he said. “We’ll probably be busy all winter with that.”

The deciduous trees have dropped their leaves and, besides a few witch hazels, nothing is flowering. But many plants have showy leaves and berries on display, and pre-winter snow has dusted the gardens.

This is far from peak season at LongHouse Reserve, for sure, but there are still sights to see.

To share an appreciation of the reserve year-round, Mr. Winenga leads “The Seven Seasons of LongHouse,” a series of walks, each with a different theme.

“What we’re talking about are the extended seasons: spring, summer, autumn and winter, but then there are plants flowering in late fall, early winter and early spring. That really shortens the winter — what we think of as winter, when nothing is in bloom. So we’re really only without any blooms for, like, a month and a half. We still have some of the fall-blooming witch hazels in flower now, and the early-blooming ones, they will start early, mid-February. And snowdrops will start then.

“So, we thought, since we’re officially only open through the season, it would be nice and also give a little insight into what the garden looks like any time of the year.”

The walks offer a different perspective on a site that many guests are used to only seeing in spring and summer.

The sculptures look beautiful in the snow, Mr. Winenga said, and the sunshine in the afternoon backlights the plants: “There are a lot of aspects of the garden that get unseen.”

In November, he led the “Bark and Branches Walk,” focused on the parts of trees that often go unappreciated when they have their leaves. The walks resume in February 2020 with a theme of winter blooms and continue in March and April with daffodils and late spring’s bulbs.

Mr. Winenga joined LongHouse Reserve in March this year, but his relationship with the reserve goes back to the time he owned a nursery. He sold plants to Mr. Larsen and, about 15 years ago, he installed the reserve’s grass garden.

It was around then that glass sculptor Dale Chihuly had a major exhibition at the LongHouse, and the grass garden became part of an installation with glass spears, Mr. Winenga recalled.

“So, after many years, I came back to the LongHouse,” he said. “I hadn’t really seen it much, but it had really evolved beautifully. You know, we lost a lot of black pines in the last couple years from a disease, but there’s a lot more sun than there used to be and a lot more opportunities.”

His return gave him the opportunity to renovate the grass garden, and he’d still like to do more work on the molinia, or moor grass, that grows in the center bed of that garden. “I thought more of it as a light veil, but it grew so thick that you can’t look through,” he said. “So we’re going to thin it out a little more.”

In his first year, he did not plan any drastic changes for the reserve. He took the time to absorb the gardens, he said.

“For me, it was just an amazing experience to live with a large garden like that for a year, and especially the sculptures,” he said. “It’s very different to see a sculpture for the first time — it leaves an impression. But the familiar, I think, the brain absorbs in a much different way than something that you experience in a new light. This place is just so inspirational for young kids who come, and teaches you so many things that the kids don’t learn in school.”

One of Mr. Winenga’s favorite educational tools at LongHouse Reserve is a giant rose sculpture, with scattered petals, by Will Ryman. Named “The LongHouse 6,” the 24-foot stainless steel red sculpture will remain on view there through April 2021.

“In the spring, when the ferns just pop up, it’s so surrealistic. The petals are blown into the woods,” Mr. Winenga said.

He likes to use the sculpture to give a lesson on botany, though the artist did not adhere to accurate botanical details.

“It’s an icon of a rose, but it still draws people,” Mr. Winenga said. “When they hear rose or they see rose, they come running. There’s something about roses that draws us. I think we all have a memory of the beautiful rose, not realizing it’s just a short moment in the year when it looks great, and the rest of it we don’t remember.”

He’d like to put photographs on display next year that show the sculpture’s foundation, 24 inches deep in a hole that was dug 13 feet in diameter, “because a rose is only as good as its roots are.”

Mr. Winenga’s own education on flowers, grasses, shrubs and trees started when he was a child growing up in the northern part of Germany, close to the Dutch border. His father, Enno Winenga, is a landscape architect there who worked on parks and castles all over northern Germany.

“I grew up in a family nursery that was started by my great uncle, where a lot of new hybrids were developed,” he said. “I think my uncle named over 200, close to 250, new varieties that all got high remarks — some of the highest medals.”

Named Ernst Pagels, the late gardener’s nursery was in Leer, Germany, and he mainly grew perennials and ornamental grasses — “all plants that were hardy and long-lived, and performed very well.” He died in 2007. Even 10 years after he died, Mr. Winenga said, one of his plants was named the perennial plant of the year by the Perennial Plant Association.

Mr. Winenga studied how to run a nursery and propagate plants. After earning a bachelor’s degree in Düsseldorf, he was required — under the European educational system — to work five years as an apprentice before he could enter a master’s program.

“My great uncle insisted that I would travel for five years and work in foreign countries,” he said.

However, he never went back for his master’s. “When I came to Long Island, I decided that this is where I wanted to stay, and I started my own business,” Mr. Winenga said.

He originally arrived on the East End in 1990 just to work for one season.

“Even though my father was a well-known landscape architect, I never really had any interest, until I came to Long Island and saw much more elaborate gardens to what I was used to seeing in Europe,” he said.

Mr. Winenga got his start on the East End with a small company in Wainscott called Creative Landscaping. He then worked with Whitney’s Landscaping in East Hampton before opening his own nursery on 10 acres in Sagaponack, Garden Treasure Nursery.

After the recession hit a little more than a decade ago, causing his market to disappear, he decided to sell that nursery — though he still lives in Sagaponack, next to where his nursery was.

He was working for eight years as an estate manager in Bridgehampton prior to taking his current post with LongHouse Reserve. His new job brought him back to his real profession, his passion, he said.

“I never really wanted to admit to myself how much I was missing it, and I noticed only when I got back into it,” he added.

LongHouse Reserve was perfect not only because of its many interesting gardens and diversity of plants, but also its sculptures, he said. “I love art and sculpture, and I don’t think there’s any other place that combines sculptures and gardens like the LongHouse does.”

He has a particular interest in pre-Columbian art and spends two weeks each February in Costa Rica with his wife, Cinthya, and sons, 14-year-old Brandon and 15-year-old Luke, to see art — and to go “plant exploring,” as he puts it.

The “Seven Seasons of LongHouse” Saturday garden walks continue with “Winter Blooms Walk” on February 29, “Joyous Daffodils Walk” on March 21, and “Late Spring Bulbs and Early Blooming Perennials” on April 18. The start time is 12:30 p.m. The cost per walk is $20, or free for members. Membership is $95 per year, or $35 for students, and $150 for families. RSVP to events@longhouse.org or 631-329.3568. For more information, visit longhouse.org. LongHouse Reserve is located at 133 Hands Creek Road, East Hampton.