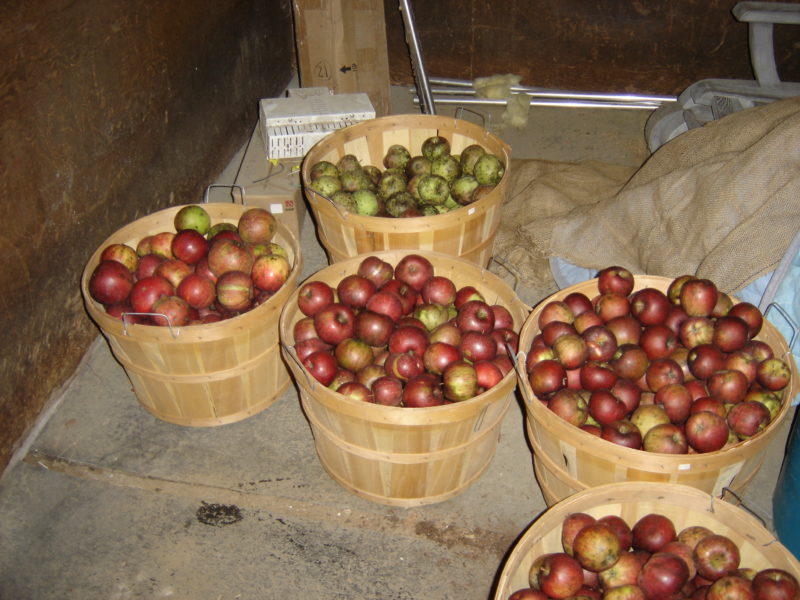 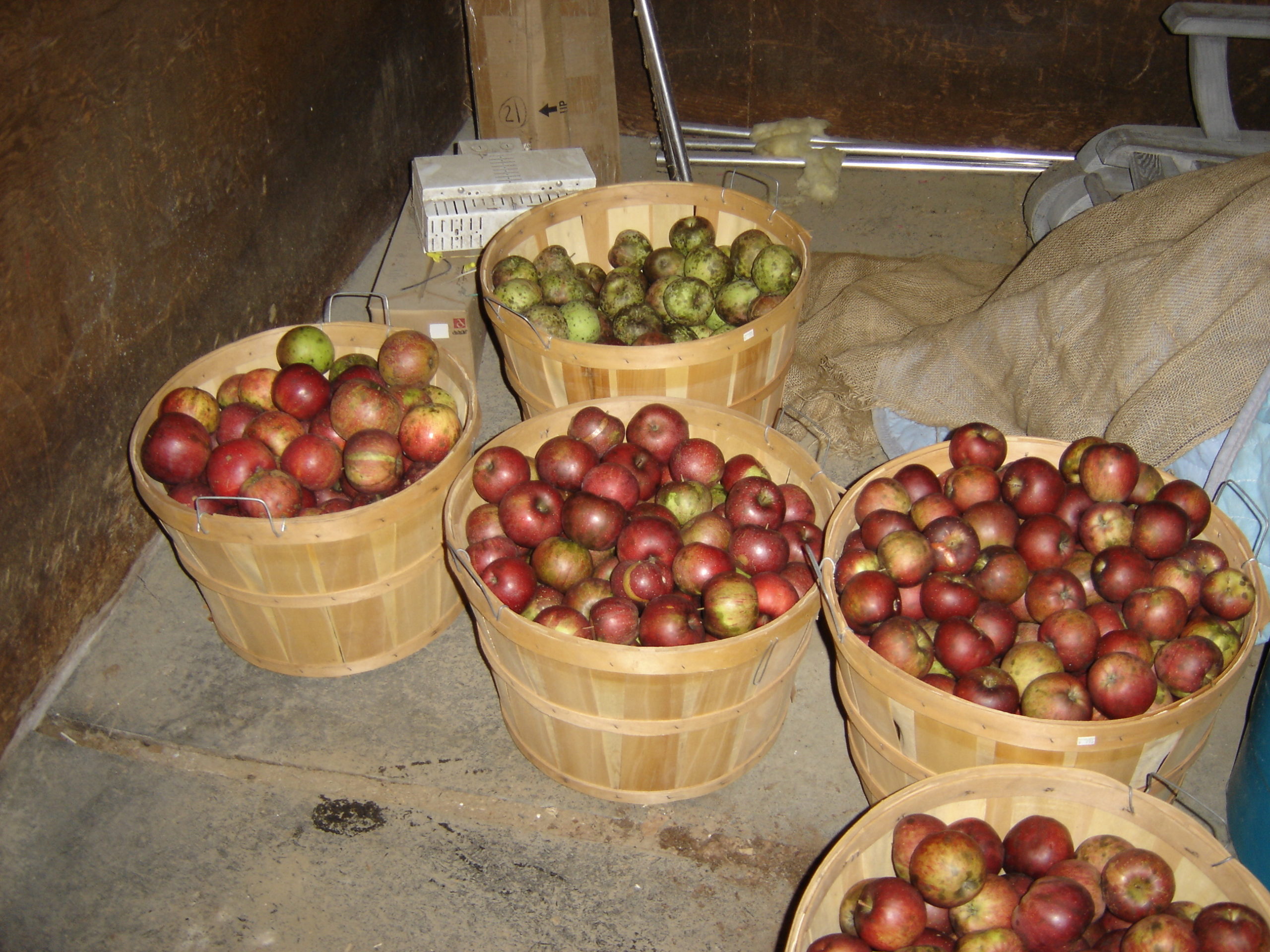 Once collected the apples are ‚Äúsweated‚Äù to bring out the flavor and soften the skins. Just before going into the grinder they are well washed. ANDREW MESSINGER 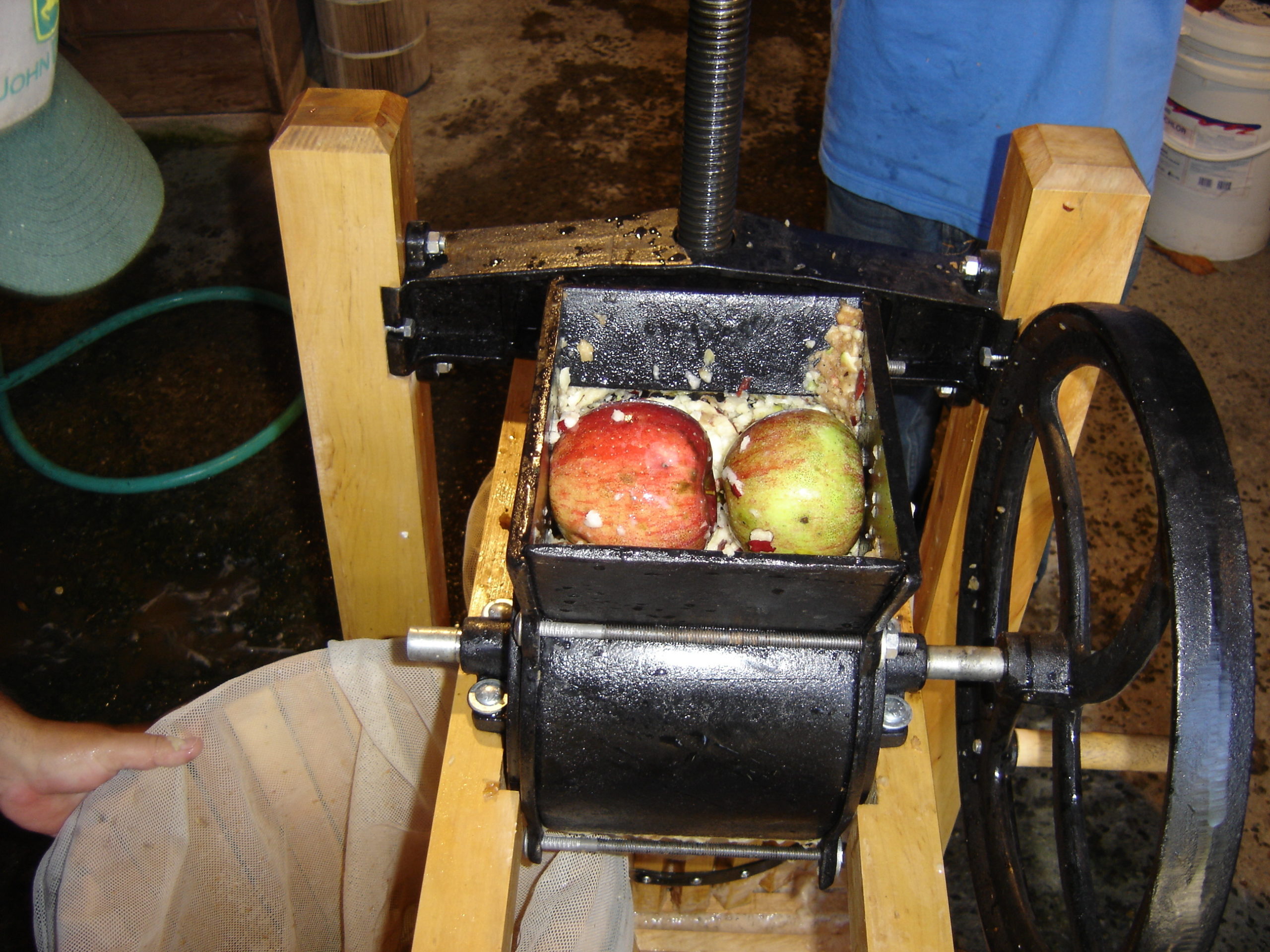 Several apples in the grinder. The wheel on the right is turned to grind the whole apples, allowing the pulp to drop into a wooden basket below. ANDREW MESSINGER 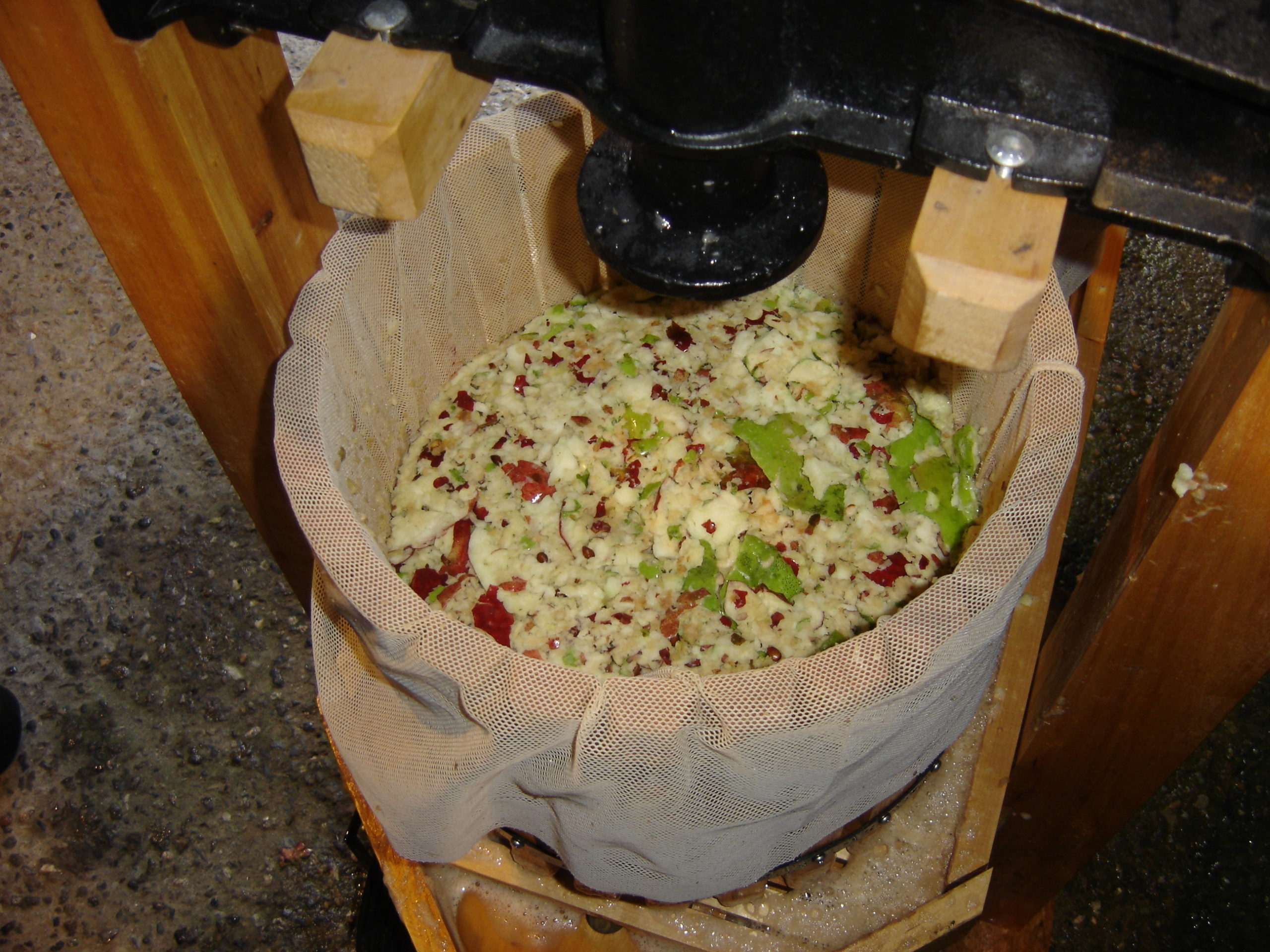 After grinding, the apples fall into a wooden basket with a mesh liner, and they are ready for pressing. ANDREW MESSINGER 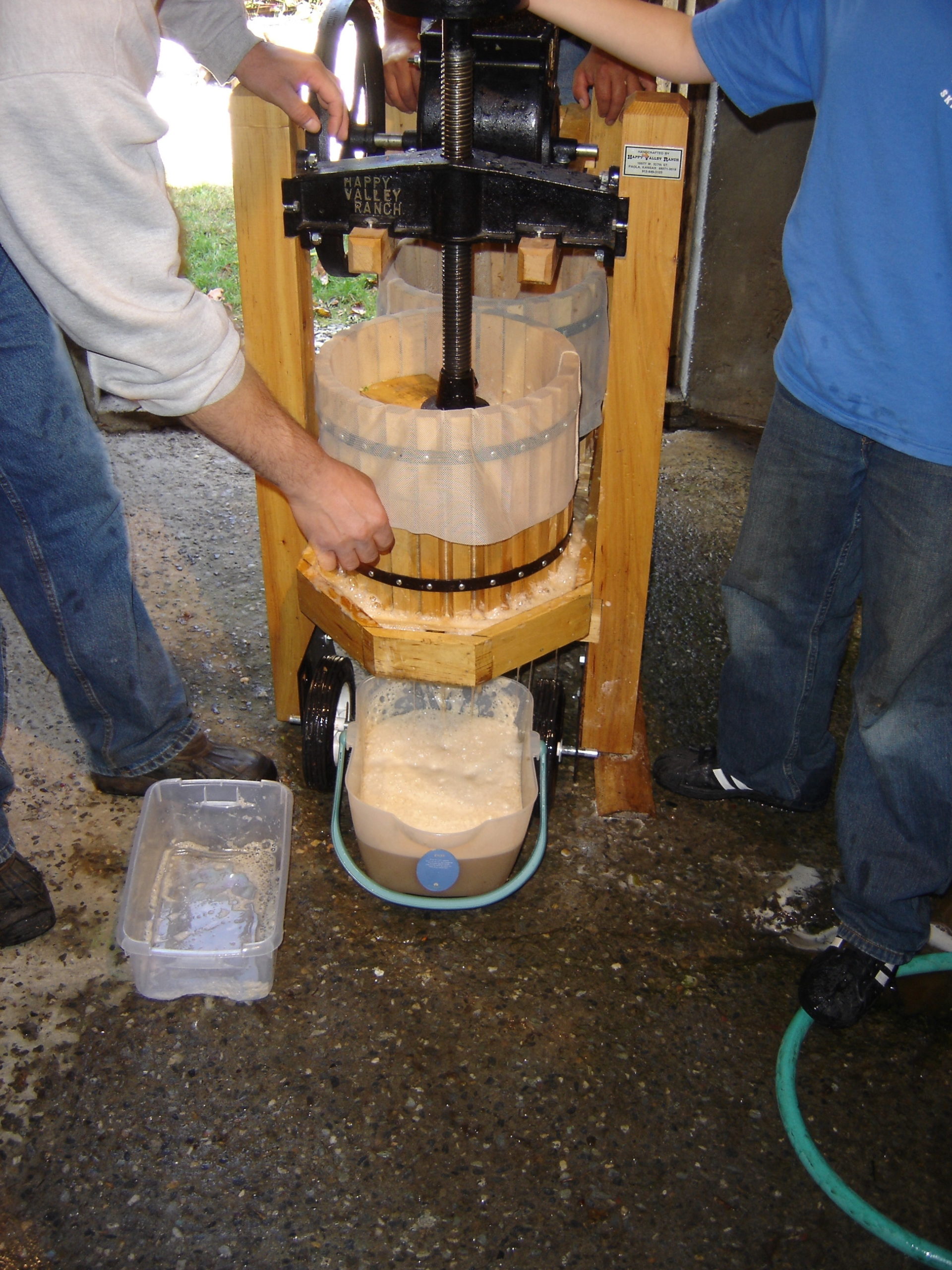 Using a manual screw-type press, the mash is pressed out and leaks into the trough under the basket then through a hole into the pail below. A bushel of apples will yield two or more gallons of cider. The cider is then decanted into pint, quart and gallon plastic jugs. The used mash is then put on the compost pile. ANDREW MESSINGER 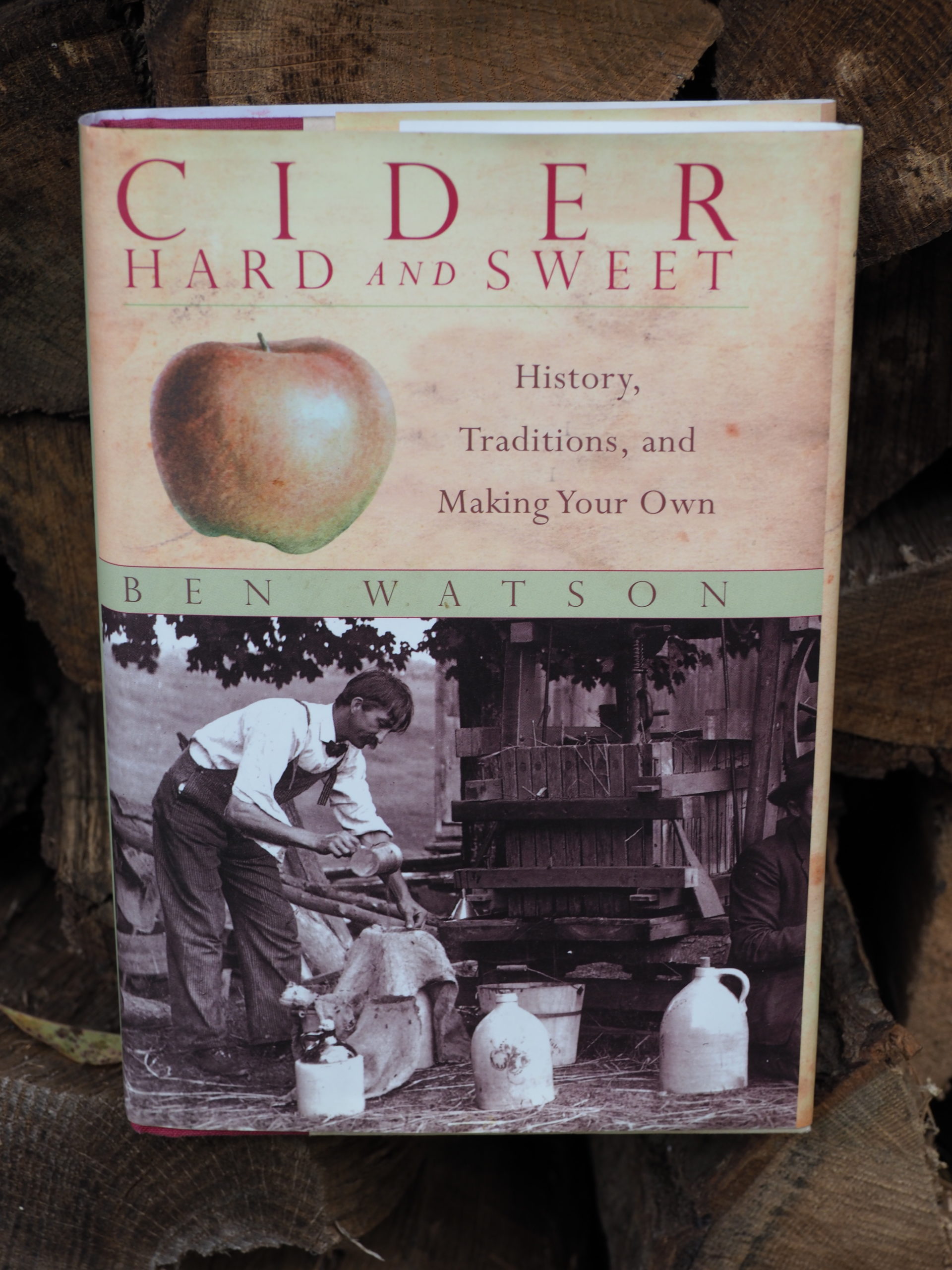 This is one of the best (of many) recent books on cider, but this one has the fascinating history of cider as well as details on making ‚Äúsoft‚Äù and hard ciders. ANDREW MESSINGER

The property next to where I grew up was a rambling old North Shore estate that had already been carved up several times.

There was an old wooden barn with a storm cellar, and a tool shed with all kinds of farm and orchard tools that predated gasoline engines. It was also the home of the infamous community compost pile that I once set ablaze (by accident) and a magnificent vineyard whose fall ripening grapes sent an intoxicatingly sweet scent through the neighborhood for weeks. There was a cherry tree that seemed a hundred feet tall, several types of pear and peaches and an apple orchard with maybe 40 large fruiting trees.

First the cherries would come into season, and we‚Äôd pick them by the bucket (or so it now seems) with most of the sweet red fruits being eaten before they got anywhere near a pie. Later came the huge peaches, sickle pears, grapes and all the while from late summer through hard frost the apples seemed to drop from heaven. Those that refused to drop at exactly the right moment were coaxed with large wire-basket pole apple pickers.

There was always a wafting aroma from this fruitland as only so much could be eaten and given away. The landowners never seemed to care much about this gold mine, but as they got older they looked forward more to the annual flood of neighborhood children rather than the harvest. The yellow jackets and crows always had a field day, but it was a rare day that you could come through the orchard and find a left-behind, fallen apple. Nearly every pome that fell or could be reached that didn‚Äôt end up eaten, or pied, no matter how scarred or blemished, made its way to the ancient but serviceable apple press, thence to cider.

You don‚Äôt run into many people these days who are making their own cider, and it‚Äôs too bad. The pasteurized and filtered stuff sold in supermarkets is about as bogus as you can get, and it probably only resembles the real thing in a legal definition, not taste or quality. For a short period of time in the fall you can purchase ‚Äúgood‚Äù cider that is locally produced, and at a handful of local spots local apples are used as well. And recently, there‚Äôs been a great resurgence in making hard cider ‚Äî the kind with a kick.

Making your own cider can be a perfect solution to more apples in your backyard than you can eat, and the way an apple looks has little to do with the way the cider tastes so nearly every apple can go into the mash. You can also buy ‚Äúutility‚Äù apples from local orchards that can be added to your mix.

According to a 1905 edition of Garden Magazine, the best cider is not made of sweet apples, but from good, juicy sour kinds such as Northern Spy and Baldwin, both of which are still available. It‚Äôs often advisable, however, to put in a portion of sweet apples according to your particular tastes. And just to confuse matters, there are some texts that say you should only use one type of apple per cider batch, using the other varieties only as fill-ins when the crop falls short. Experiment!

Back at the turn of the 20th century, an apple press went for $10, and you could buy them at Sears. For years, presses were hard to find, but now all you have to do is Google ‚Äúapple press‚Äù and you‚Äôll find a half dozen vendors selling presses from $300 to over a grand. Some are quite simple and adequate for small home orchards while others can be used by two people to press six to 10 gallons an hour.

A bushel of apples should yield from two to as much as four gallons of cider, but this varies depending on the type of apples being pressed and the moisture content, which varies from year to year. Some other interesting facts: fresh-made chilled cider will remain stable in the refrigerator for as long as three weeks, but plan on two. In Vermont, the main apple used for cider is the McIntosh. Cider can be frozen without any loss in quality for about a year by filling 1-gallon plastic jugs (very clean ones please) with 80 percent cider to allow for expansion during freezing.

The old-fashioned method ‚Äî and yes, there are newer and easier methods ‚Äî of preparation calls for the making of a pomace first. On a layer of straw (preferably rye straw) the crushed and grinded apples were placed inside the press layer upon layer until the press was filled. This layered ‚Äúcheese‚Äù was then pressed for the first time, the pressure released and the cheese is stirred, then the pressure is applied again. The raw, unfiltered cider is then placed in casks that are left uncorked for several weeks to ‚Äúwork‚Äù and then the cask is corked. If the cask was kept airtight from the time the cider is made, it might have lasted through the winter, but it does get harder and harder. With the cask uncorked you‚Äôll end up with some excellent apple cider vinegar.

Now this was all well and good, but we just use a grinder and a press. We store or sweat the apples in a cold cellar or garage for about a week. Then all the bushels are brought to a washroom where the pressing is done. The apples go into a tub where they are washed then two people begin the grinding. One person feeds the apples into the grinder while the other turns the wheel. It‚Äôs a great physical workout for a cool fall morning. The result is a ‚Äúmash‚Äù that falls into a wooden slatted bucket below that is lined with a nylon mesh bag.

When the bucket is full it‚Äôs moved down the plank about 18 inches until it‚Äôs under the press and an empty bucket is put in its place. A wooden lid is placed on the top of the mash bucket then one person turns the screw on the press, putting pressure on the lid and slowly, ever so slowly, the cider is squeezed from the mash as it flows through the nylon filter bag then out the slats of the wooden bucket. It flows down a channel to the end of the press where it drops into a funnel and then into a waiting pail. When one pail is full it‚Äôs decanted into gallon and half-gallon jugs. We try to label each jug to indicate what the apple mix was for that particular batch and date the jugs. When all the jugs are filled about 90 percent of them go to the freezer, and in good years we had no problem filling three freezers with 100 gallons of cider.

Since we didn‚Äôt pasteurize our cider we never used ‚Äúdrops,‚Äù or apples that have hit the ground, as this vastly reduces any chance of bacterial contamination. This is critical when deer and their dropping are around. Oh, apples are deer magnets. In years when our crop wasn‚Äôt so great we know of other growers who will sell us their ‚Äúseconds‚Äù or utility apples, but this makes me a little nervous as I don‚Äôt know where they‚Äôve been and how clean they are.

Sanitation is critical, and during the whole process, you want to make sure that your hands are clean as are all the parts of the press. We wash everything with hot water and dish soap before pressing and after, and we always wash the apples before pressing as well.

Now there is a different type of cider than the one we are most familiar with (actually there are several types of hard and soft cider). I discovered this while on my first trip to the Chelsea Flower Show in London. My hosts were the Blooms of Bressingham Gardens, and I was spending the day with one of their managers as they set up their displays for the show. In mid-afternoon he suggested we go across the street to get a glass of cider. The brew was absolutely wonderful, sweet and most definitely made from apples. A half-hour later we headed back to the show, but as I stood to leave the pub I realized that the cider had gotten me pleasantly smashed.

If you‚Äôd like more information on cider, cider making and the wonderful fermented English cider simply Google ‚Äúapple cider‚Äù and you can read to your heart‚Äôs content. The press that we use was purchased from Happy Valley Ranch (happyvalleyranch.com) in Kansas about 20 years ago. The company still sells the same model, the American Harvester, which now goes for $1,400, but Happy Valley Ranch does have smaller and less expensive ones. A good press should last for decades.

First, though, you need the apples. So get your orchard cranking or stop by one of the local orchards on the South Fork or North Fork and see if you can strike a deal for pressing apples for next year. There‚Äôs also a great book on cider, ‚ÄúCider Hard and Sweet, History, Traditions and Making Your Own‚Äù by Ben Watson that would make a great gift or reference. It also has some fascinating history on apples and apple cider‚Äôs role in domestic politics here and in Europe. Time to plan your orchard? Keep growing.

Winter always comes late to the East End, and for some, that‚Äôs just fine. For ... 7 Dec 2021 by Andrew Messinger

We‚Äôre within days of the holiday season, and since it‚Äôs so hard to find things ... 16 Nov 2021 by Andrew Messinger

My annual admonition that it‚Äôs time to get your houseplants inspected, protected and back indoors ... 27 Sep 2021 by Andrew Messinger