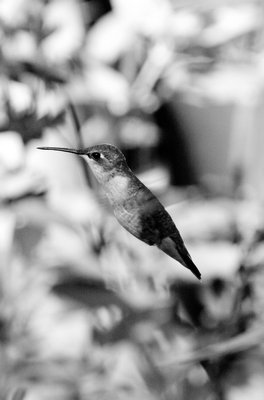 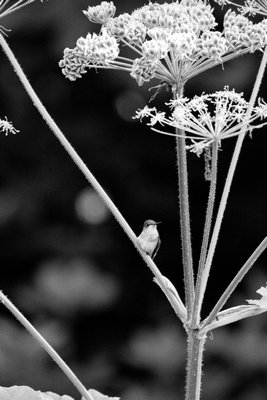 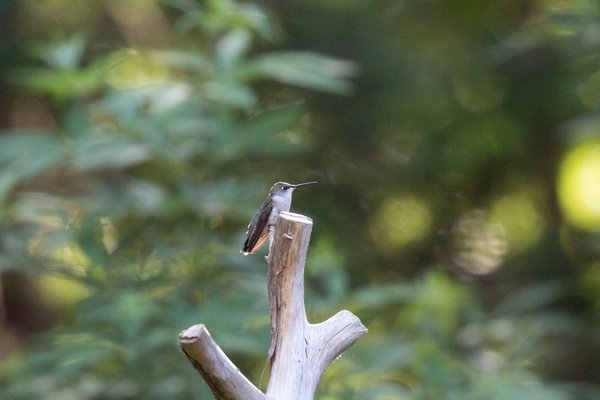 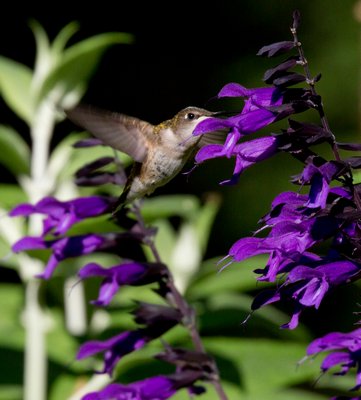 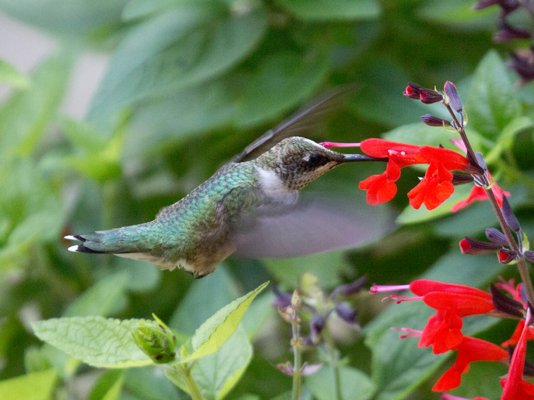 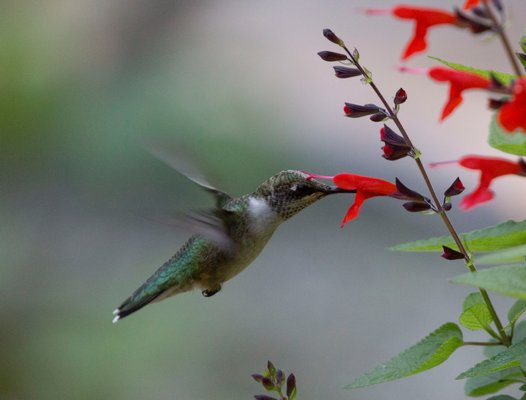 "In The Red Salvia." MARIA BOWLING. 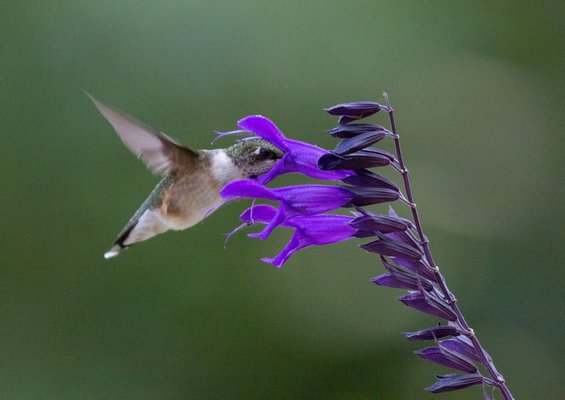 "In the Salvia." MARIA BOWLING 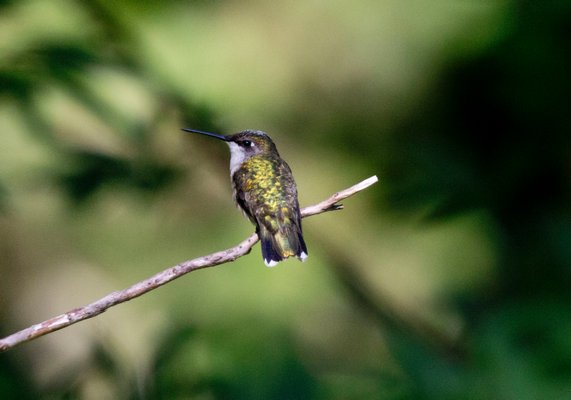 Photographer Dr. Maria Bowling’s yard has been home to Flora, the hummingbird, for the past three years.

Dr. Bowling, who maintains a private acupuncture practice, cultivated her garden to attract hummingbirds after visiting the Baiting Hollow Hummingbird Sanctuary in Riverhead. She planted red and purple salvias, which are in the sage family, outside her home in Springs—and kept her eyes peeled.

Sitting on his porch last summer, he remembered the first time he saw a hummingbird, in a park in San Francisco. “I couldn’t figure out what it was,” he said, “a cross between a bird and an insect.”

Although the professor’s hillside sanctuary is not open to the public, his goal is to share his knowledge. “Not many people know hummingbirds are on Long Island,” he said. It is the smallest bird on Long Island, half the size of a wren.

“There’s only one type of hummingbird on the East Coast: the ruby-throated,” he said. That doesn’t mean they all have ruby throats. Only adult males have the red gorget they proudly present when looking to mate. Many times, a male’s gorget blends in with the rest of his body, an emerald green black. The iridescence is noticeable only at certain angles, when the sunlight hits it just right.

The male will display his ruby throat as both a deterrent to intruders and to attract females. “He will fly as fast and accurately as possible while she watches,” Dr. Adams said. “Only if he does it really well will she mate with him. Otherwise, she’ll find someone else.”

The male hummingbird dives down, moving so fast that the wind whistles through his forked tail. “This is the high-pitch part of the mating dance,” Dr. Adams said. The male will go very high and dive down in a U-shape or pendulum, repeating the steps a hundred times or more. When he gets in front of the female sitting on the branch, he flashes his throat.

After the deed is done, the male takes no part in raising the young. In fact, she may never see him again.

Adult males are the first to arrive in April. “First thing, he goes to the feeder, just the same as he remembers,” Dr. Adams said. Hummingbirds remember each food source they visit, even years later.

“They feel at home here,” Dr. Adams said of his sanctuary. “I preserved the habitat as I found it, with a few additions.” He left all the native wildflowers and makes room for more to grow by weeding now and again. He took out invasives like bittersweet and honeysuckle; however, he does lay claim to the “world’s largest bonsai in a pot.” Lichen falls off the branches, which the hummers like to use in their nests for camouflage.

Nests are so small it would be “a tight squeeze to pop a thumb in.” Inside is a soft bowl of thistle down. Two tiny white eggs give way to nothing more than pink specks.

When the mother sits on the edge of the nest, it looks like she’s stabbing her babies to death, when, in fact, she’s sticking insects into their hungry mouths.

“There isn’t a flat inch anywhere on the property,” he said, surveying his land. “It plunges 3.5 feet.” Benches, chairs and sunny spots are scattered about, making this a slice of heaven—and not just for the hummingbirds.

“Nature and quiet is best for troubles of the mind,” he said. “It’s restorative, vital and a recognized health significance of nature.”

The only thing that disrupts the peacefulness are the helicopters and seaplanes that fly at eye level, inciting an unforeseen anger in the mild-mannered neuroscientist, who has studied neurodegenerative diseases such as Alzheimer’s disease. “I chose this spot because it was very quiet. This is disgusting,” he said.

“The noise is very disturbing to humans,” he added. “At least we can complain.”

They might not be able to dial the noise hotline, but a hummingbird’s brain is larger than the human brain, comparatively speaking.

Another problem Dr. Adams has noticed is that the number of hummingbirds dropped when a nearby golf course was built. “That’s the price we pay,” he said. “If you want a nesting site, you don’t want to spray your yard.”

To enjoy hummingbirds, you must develop a bit of an eye for what’s going on. It’s a wonderful hobby for everyone, but people tend to be impatient. “You have to work,” he said. “One of the keys is, they don’t like sudden movements. They will get close, right in front of your face, if you don’t move.”

Dr. Bowling is patient, and for that she gets returns.mariabowlingphogtpmh

“Flora allows me to get quite close to her while we are in the garden together,” she said of one hummingbird. “In the mornings and evenings, I sit and wait for her on a meditation cushion with my camera.”

She uses a Canon EOS 5D Mark III with an Extender EF 2x and a 100-400 mm lens. “I tried a tripod and monopod to stabilize the weight of the camera, but they are too clumsy,” she adds.

Flora moves so quickly that Dr. Bowling has learned to steady her body and use her elbows to stabilize the camera. “The more still and regulated that I become in my own physiology and with my breath, the more access I seem to have with the hummingbirds,” she says. “Small movements activate them, and then they vanish in the blink of an eye.”

Hummers use a lot of energy. They flap their wings 80 times per second, fly backward and upside down, and hover in place. At times, their heart expands in order to pump more oxygen. They eat every 15 minutes, can catch insects in midair, but are sure to take the time needed to digest, perched on twigs.

“Some days, she allows me to get within feet of where she is resting on a fine branch,” said Dr. Bowling.

Through Flora, she has been learning hummingbird behavior. When the male, whom she named Guapo, showed up, he fought a lot with Flora. He has tried to take over her perches to guard the nectar. Flora fights back in defense of her garden, and many times they fight just over Dr. Bowling’s head while chirping and squeaking.

Hummingbirds are constantly communicating—but it’s not all wine and roses. Dr. Adams puts it bluntly: “They hate each other. They’re looking for the same food. One starts to feed, and another one will come along and start chirping, ‘Get out of my flowers!’”

Babies grow very rapidly and fly farther and farther afield to fatten up for a migration of heroic proportions, all the way across the Gulf of Mexico to Central America, at a cruising speed of 30 mph, though they can fly up to 100 mph. “During the 1,400-mile trip, most have accidents,” Dr. Adams said.

Guapo slowly warmed up to Dr. Bowling’s presence, but it took several weeks. “He flashed me with his ruby, iridescent feathers. He is quite handsome and agile,” she said. “Flora often greets me with equal curiosity and also comes to the windows and looks in. This is fascinating behavior and one that at times feels quite magical.”j

To see more of Dr. Bowling’s hummingbird photos, go to mariabowlingphotography.com. To find more about hummingbird behavior and how to cultivate your own sanctuary at Dr. Adams’s blog bhhummer.blogspot.com. He recently posted a short video of a hummer recycling a nest at his winter home on the Bahamian island of Eleuthera, saying, “Quiet has become the greatest luxury of all.”