ICFF: Modern At Its Best 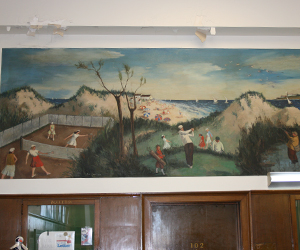 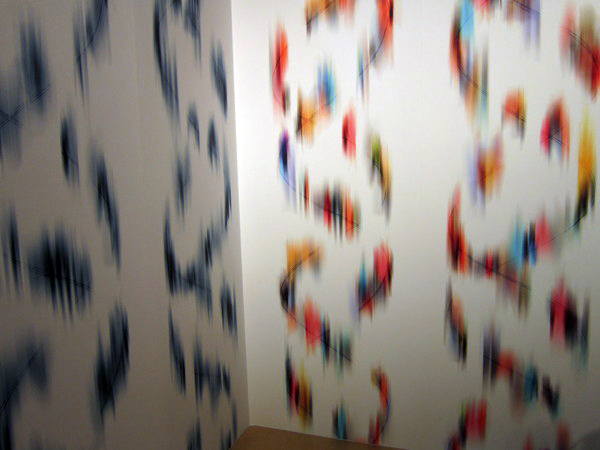 “So much wallpaper!,” designer Kate Reid remarked at the 25th annual International Contemporary Furniture Fair in Manhattan last month. “It seems like the whole world just wants to paper away.”

True, this year, countless booths at the ICFF, held at the Jacob K. Javits Convention Center, showcased breathtaking options to alter your Sheetrock. And wallpaper companies—such as Eskayel, Juju Papers, Loboloup and Grow House Grow—are among many.

With digital capability now swiftly at hand, the wallpaper designer has become the wallpaper artist. A tremendous amount of energy is funneling into the production of this medium, and vinyl is the message.

Wall coverings are not so concentrated on pattern and repetition now as they are mentally challenging, environmentally altered standouts that are meant to provoke and stimulate; the goal is seldom to simulate a calming pretty background. For example, many of the vinyl wall coverings from Trove sought a poetic liberation in its images of solarized starlets and former Romanoff royalty. On others, vibrant watermarks of turquoise jelly seems to ooze into Rorschach designs of cobalt. DNA ladders of twisting ikats march up the panels of booths, while textured shadows of birds flutter up from a silhouetted flock of disturbed souls.

That said, there also were a number of winning retro papers that could appear in nurseries, children’s playrooms and the abodes of perennially upbeat Peter Pans.

Another area of design that appeared well explored was that of the suspended glass lighting fixture. Hand-blown or cast-glass globes, bells and cylinders with ravishing etchings and encrusted metallics were well represented.

Tubes with lyrical swaths of transparent color were encased by Jamie Harris Studio, with the newest advances in light bulb technology. Siemon and Salazar blew planetary glass spheres with darkly dramatic striations of color, altering the meaning of task light.

Thick drops of molten glass, begging to be lined up in repetition over a long bar or kitchen island, tantalized attendees. Color refractions spattered on the walls of white booths seemed as essential to the fixtures’ talents as the mere act of illumination. And a suspended light fixture/hanging planter amused many.

Close to the exit was a rainbow panoply of miniature hot air balloons clad in scales of colorful plastic. Floating in an irresistible radiant glow, they lifted the corners of even the most jaded designer’s mouth.

Lamps were scarcer than suspended fixtures. Does a race for space deny the lust for lamps?

But a witty rendition of the simplified “lamp with shade” concept was conceived by A.D. Injection Lab. A striking block of stacked Lucite slabs was found encasing an Edison bulb, which looked as if it were frozen inside an etched lamp shade. This intriguing stacking of soft light, sandwiched between layers of transparency, was seductive, simple and cerebral—design at its best.

Stick-like constructions of extraordinary delicacy and sumptuous woods populated the Circa Lighting booth. And from StickBulb by RUX Design, long streaks of light fascinated attendees who marveled at the “barely there” appearance of these objects. And, of course, the Italians introduced their all-white minimalism with the sleekest of their tubular plastics.

Furniture was surprisingly under-represented in my opinion. Exterior “to-the-trade” furniture was displayed but most designers can already view that in the showrooms.

What was showcased took on polymorphic shapes.

A sinuous undulating black polymer bench in glossy lacquer begged the question: “How in the heck does someone sit on this?” As a sculpture in an entry hall it was utterly enticing. As a sensual structure for seating, I was still highly intimidated!

Another polymorphic shape sculpted out of layers of solid cherry resembled a pert amoeba cut through a meat slicer. Most attendees approached this with trepidation, guarding their physical well-being from possible pain until its creator, Maria Khouri, plopped her perky, black-clad tush down on it.

Her work displayed great panache as did her sparkling personality. However, for curl up comfort, I am afraid I might not be able to recommend it.

There will always be some sort of strange ergonomic contraption destined to attract the earth-shoe set. This year did not disappoint, with a profoundly silly looking “desk chair.” Basically there was an uncomfortable moulded bicycle seat attached to an ugly rod attached to what looked like a bent sit-up board.

Crowds of AARPs climbed befuddlingly aboard. They soon appeared slightly lost and confused as to why they tried this contraption but still they listened attentively to the enthusiastic guru/inventor/entrepreneur. We bypassed the bicycle/stick/rocker.

All the major plumbing suppliers seemed anxious to promote their newest, most innovative prototypes. And it was quite fascinating to discover a strong through-line of innovation and shape.

Over the last few years, plumbing design has been defined by very square faucets with geometric squared handles, plates, knobs, drains, sinks, toilets and tubs. But now, something interesting is happening. For example, Graff presented faucets, handles and knobs that flatten like paper—twisting like origami, with the sharp-edged corners rounding ever so slightly.

It’s as if plumbing designers are no longer satisfied with the Bauhaus-inspired rigid geometry. Like the fluid turn of a sheet of water, they are intent on mimicking water’s movement. The effect is sculptural rather than architectural. It is highly evocative and sensual, elevating the experience of containing and dispensing Earth’s most valuable resource.

Woods are finding themselves subject to all manner of treatments. Not satisfied with simple stains, woods like holly, maple and hickory are scraped, oxidized, pummeled and inlaid by the likes of Sami Hayek, Tod Von Mertens and Peter Sandback.

And finally, there was an entire section devoted to the creative output of various American design schools—whose refreshing and often un-commercial products are a wake-up call to all those who become too obsessed with the financial viability of a design. From wall systems to eco-friendly seating, these young students erupt with optimism and startling ideas. This alone is always worth the price of admission.

The ICFF has emerged with other satellite shows (all over Brooklyn, Long Island and Manhattan) as a burgeoning influential design event that marks an invigorating alternative to the often-viewed drudgery and dull crass commercialism of the High Point and Las Vegas furniture markets. Open to the public, these vetted shows are worth attending and then ruminating on the exciting vision of both the national and international design scenes.

Lessons Learned From The ‘Downton Abbey’ Exhibition In New York

The tips of my fingers were numb despite being covered with sheepskin gloves and stuffed ... 5 Feb 2018 by 27east

Dogs And Children Are A Decorator’s Best Friend

2017 Had a Dizzying Number Of Interior Design Trends

Despite the year’s maelstrom of events, interior design sallies forth with trends so numerous that ... 29 Dec 2017 by 27east

There Is Always Room For Flowers

My gregarious friend, Brett, always placed a cheerful bowl of flowers on his cocktail table. ... 12 Nov 2017 by 27east

Dress Up A Firebox

Mirrors, Mirrors On The Wall

The World Of Stone And Tile Is Moving Fast

Most of the world’s great cities were founded in locations accessible to trade along rivers, ... 11 Sep 2017 by 27east

Self-Expression Breaks Through In London

Padding along the streets of Chelsea and South Kensington in London, one is struck by ... 28 Aug 2017 by Brendan J. O'Reilly
×