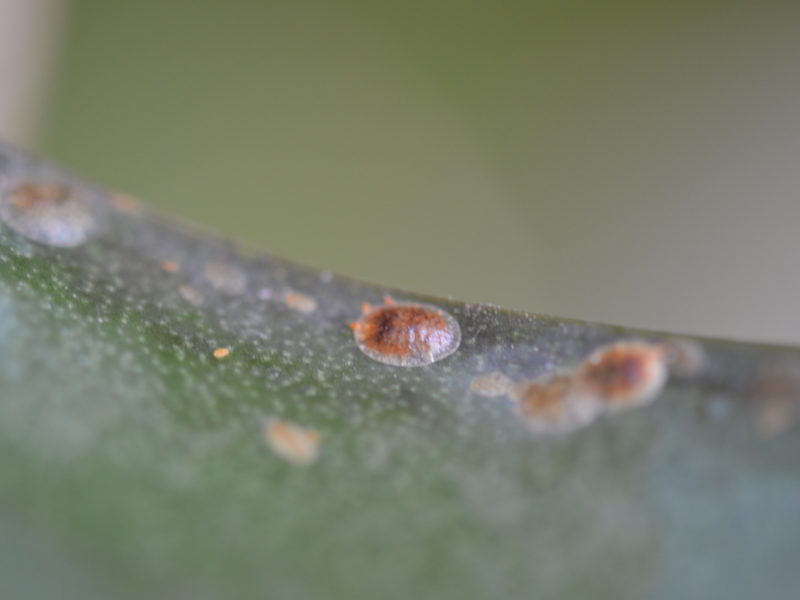 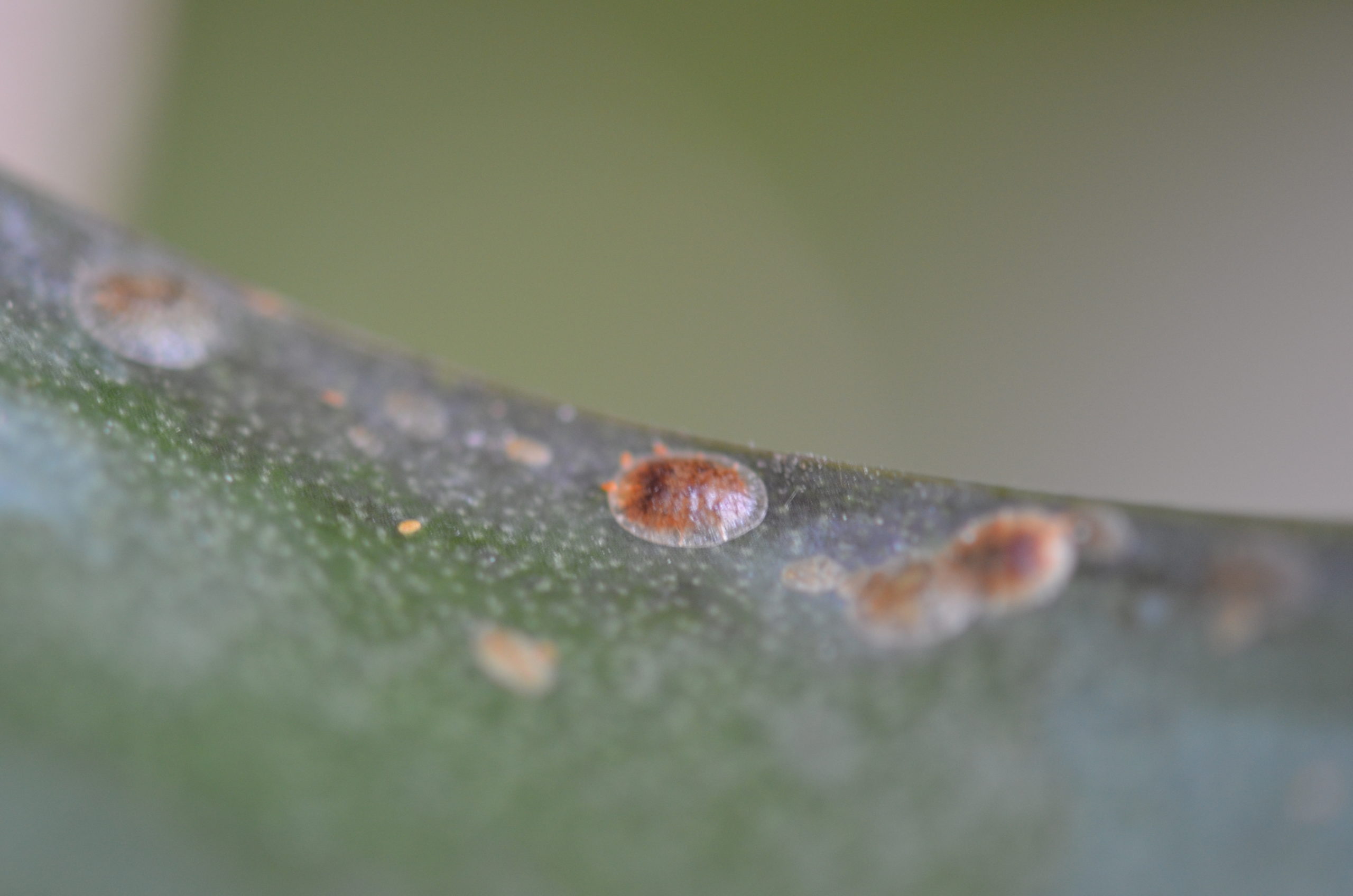 Hard shell scale in the adult stage (top) is difficult to control, but oils are effective. A smaller crawler stage of the scale is just below and also easy to eliminate with fine horticultural oil. 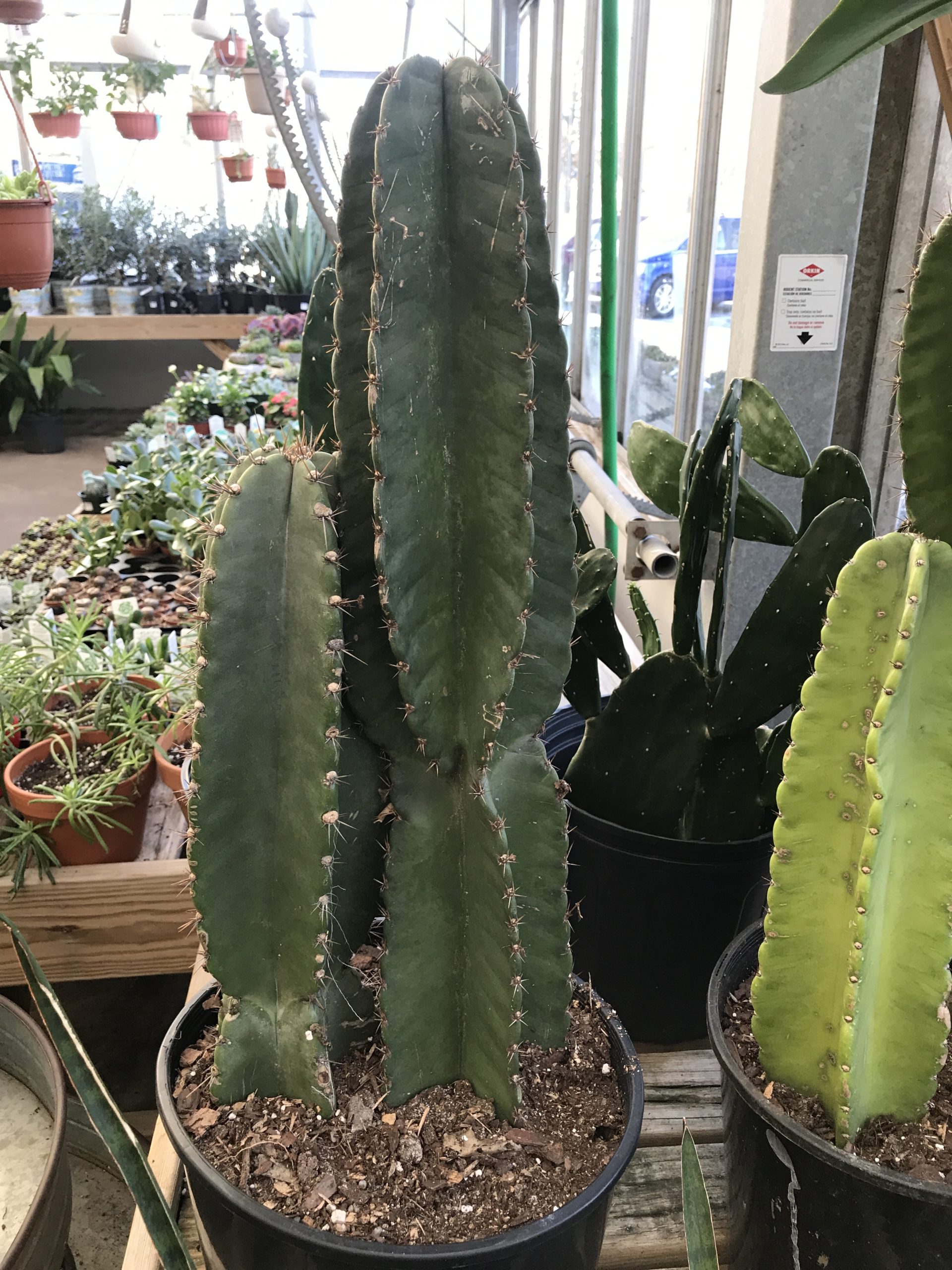 Scale, including mealybugs, are just about the only insect problem we can see on cacti. If scale is present it can be carefully picked off or neem oil may work. The oil can be sprayed or dabbed on scales with a cotton swab. Persistence will pay off. ANDREW MESSINGER 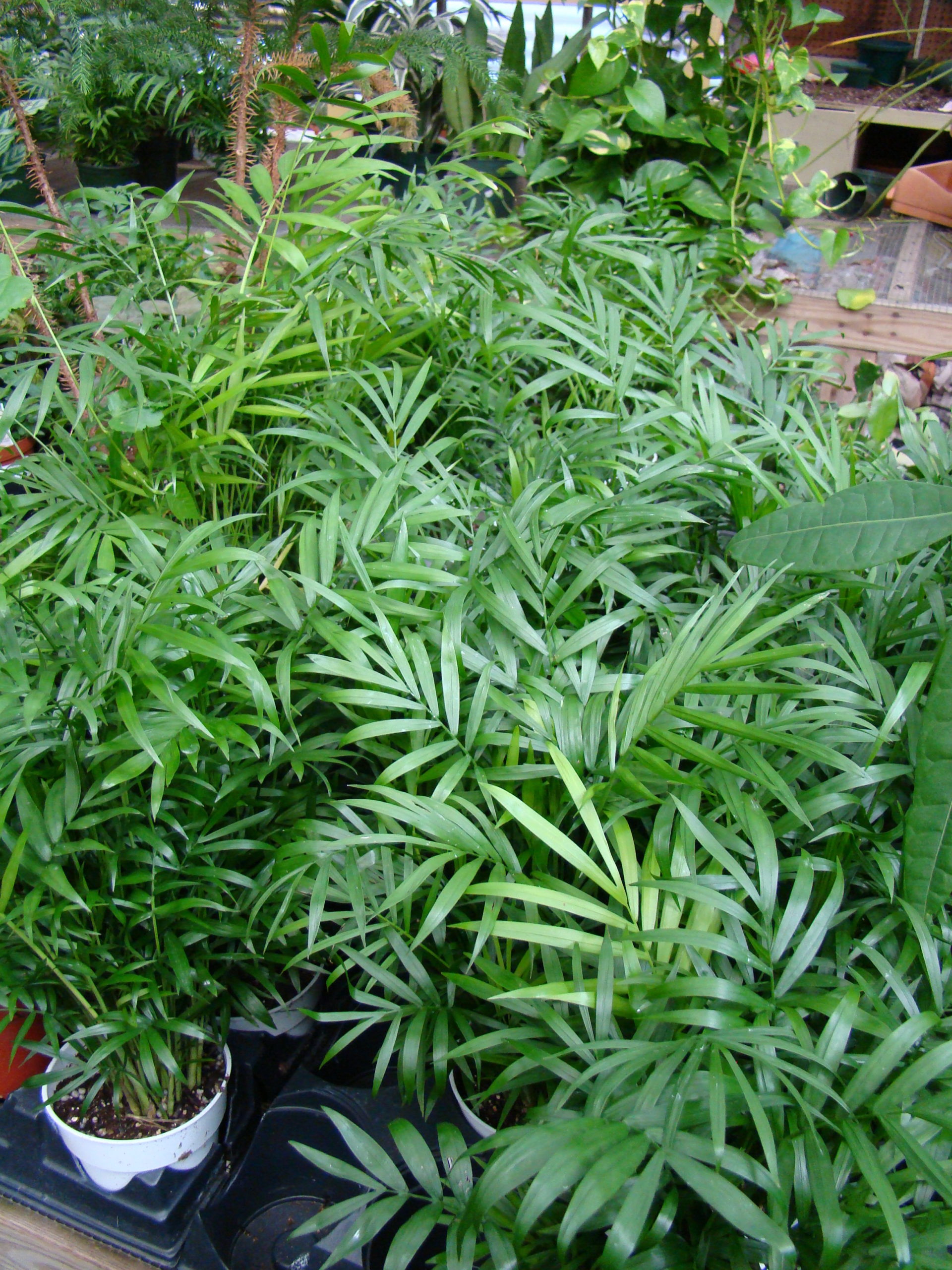 Two-spotted spider mites and scale are almost endemic on palms. Inspect them regularly and before you purchase. Scales will be on leaves and stalks. Spider mites on the leaf underside. ANDREW MESSINGER 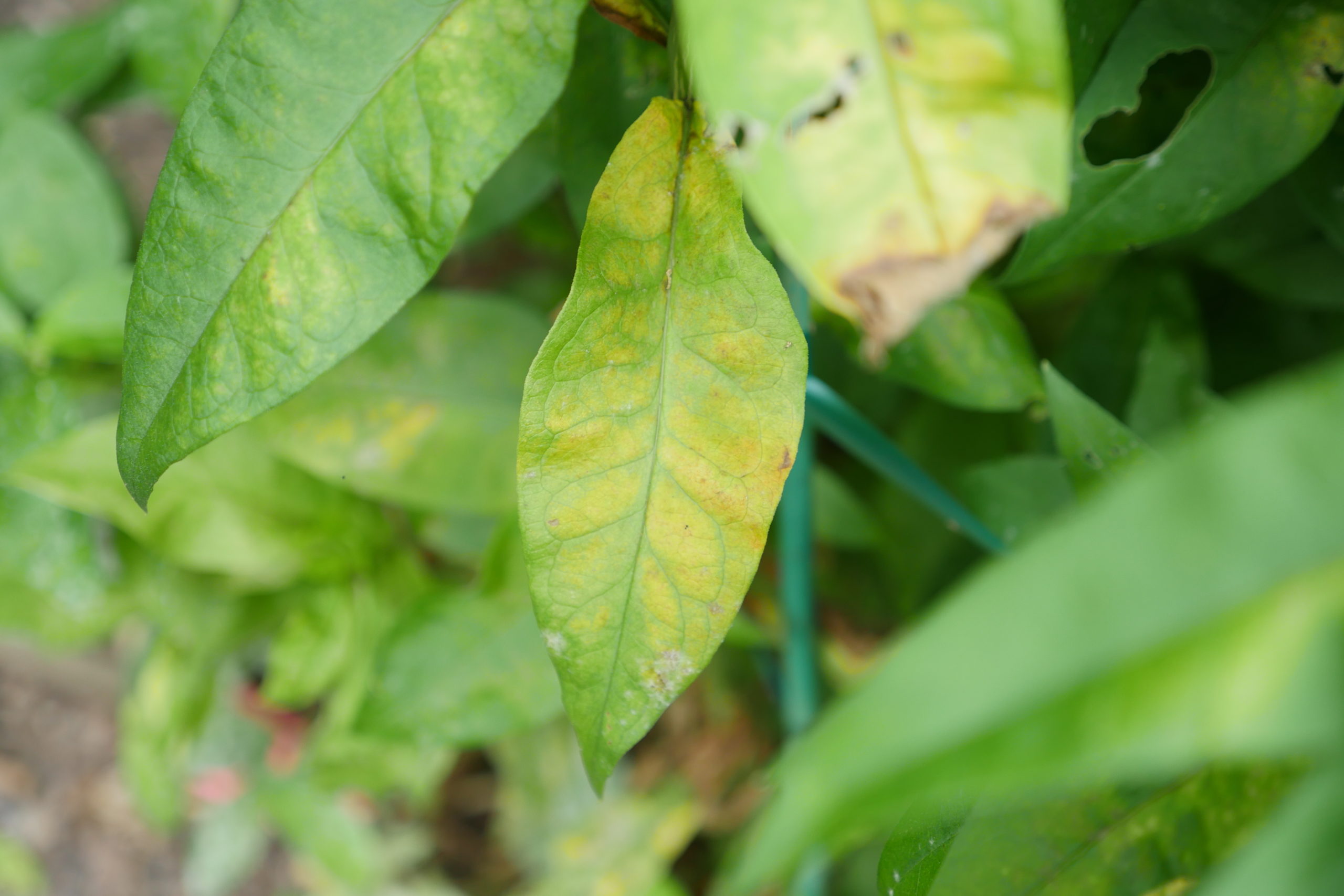 A common clue of the presence of spider mites is a yellowing or stippling of the foliage. A look on the underside with a 10x loupe will reveal if they are present. If massive silks or webbing is obvious it may be time to discard the plant. Water showers will control spider mites. ANDREW MESSINGER 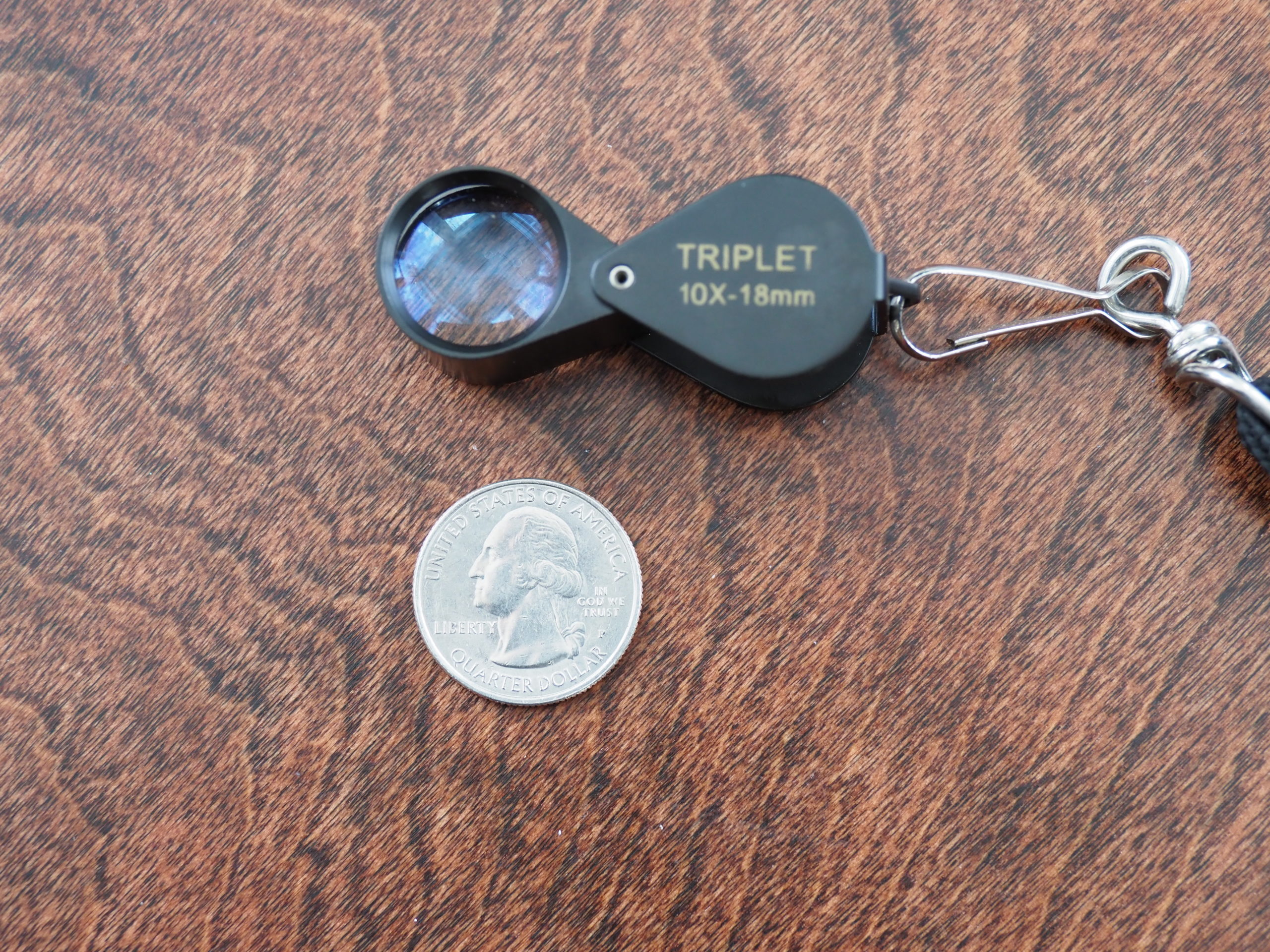 A 10x jeweler's loupe comes in handy when trying to ID insects like mites, scale and aphids. Keep it on a lanyard so it doesn’t get lost. The loupes cost under $15 and can be found online. ANDREW MESSINGER 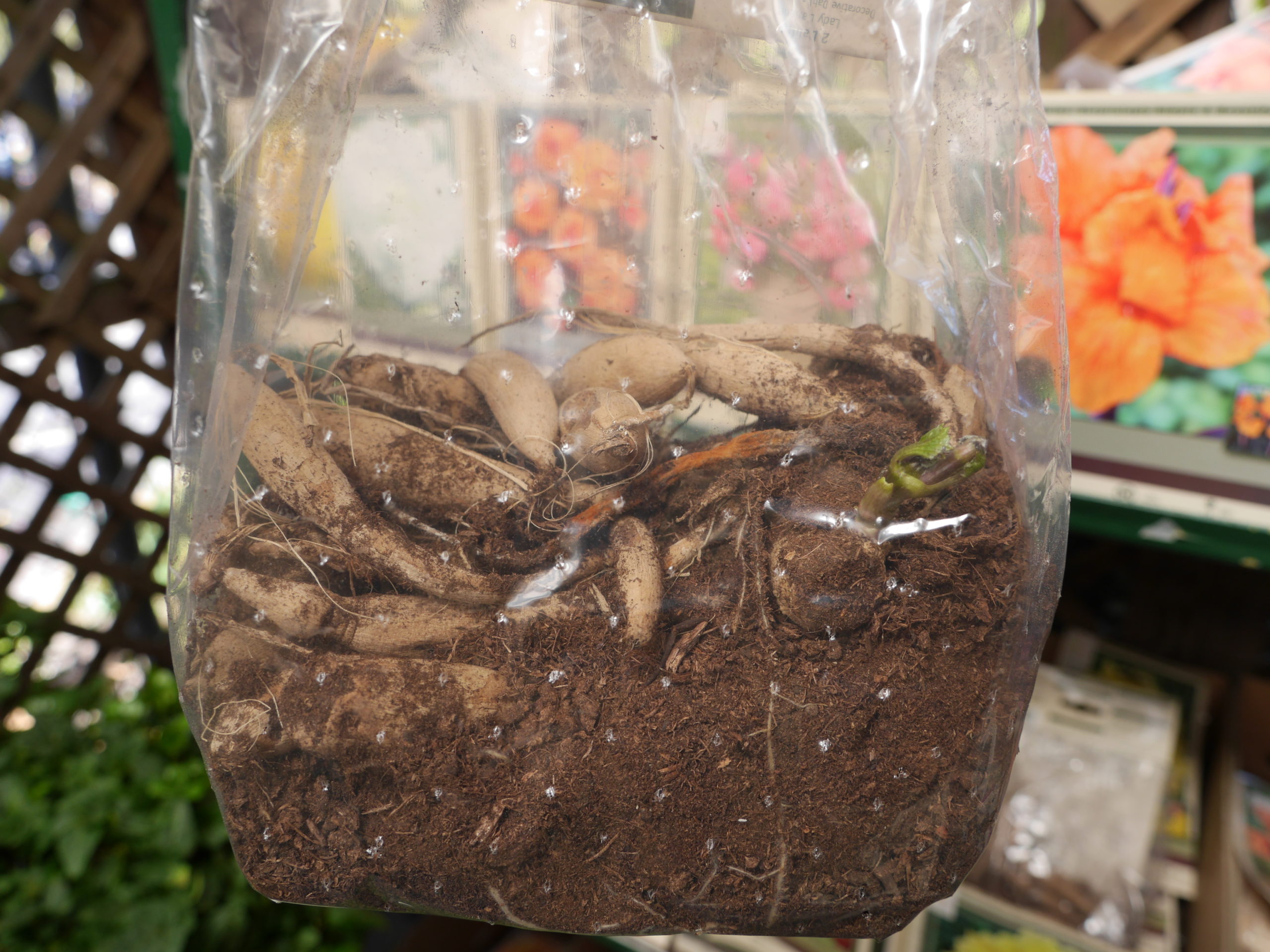 Canna and Dahlia tubers stored for the winter should be examined for signs of rot and decay. Remove the affected parts and replace the packing material (peat moss) to avoid recontamination. ANDREW MESSINGER

With only a month or so until the arrival of spring, the hints of new growth and rebirth are showing up. You can hear it from the birds, and if you look carefully you can see it in the plant world. It’s also happening indoors as your houseplants and overwintered tender outdoor plants and tubers are noticing spring as well.

What you don’t want at this point is for houseplant problems to go unattended because as it gets sunnier and warmer, even outdoors, your houseplants know the season is about to change — and they want to grow. This is the perfect time to give them a helping hand, a helping eye and some attention.

When it comes to houseplant insects, scale is absolutely the worst. Scale insects are hard to control and often hard to find. Their subtle feeding and depositing of “honeydew” — which is, actually, their sticky and clear excrement — can be more than just unsightly.

We often buy houseplants without carefully inspecting them, and just a few scales, including mealybugs, which are a type of scale, will slowly and imperceptibly multiply without being noticed. And when you finally do notice them it’s often too late or too hard to control them.

So, what does this have to do with your houseplants touching each other? If your plants aren’t in physical contact and they are free of scale, you won’t get scale. These bugs (who aren’t true insects) can’t and never fly. The only way they can move from plant to plant is by walking and they can only walk from one Dracaena, Schefflera, palm or jade plant to another if its touching another plant.

On the other hand, the second-most-feared houseplant insect (which again is not a true insect) is the spider mite. These are eight legged (like the scales) whereas true insects like aphids are six legged. While spider mites don’t fly either, they can move from plant to plant on pets, a gentle breeze, or on the thin silks they can produce. Scale can live below the soil, but spider mites don’t.

Careful and regular inspections are critical. While a small tool is necessary, the inspections are easy. The tool is a 10x, or 10 times magnification, jeweler’s loupe. These are small magnifying glasses, and the magnification makes the tiny mites visible and the smaller, mobile scale more visible.

For scale, start your inspection at the soil line on the trunk and branches. Move to the leaf stalks then inspect the leaves. You don’t have to inspect the entire plant, but you do need to be methodical. Scales love to hide in crotches on stems. As their populations increase, they become more visible but harder to control. Most insecticides won’t work. Mature scales, with the exception of the mealybugs, usually have a hard outer armor, which makes them impervious to insecticides.

When scales are young and mobile, some insecticides will work on them, but determining when the “crawler” stage occurs can be extremely hard. For this reason, scale control is very difficult and time consuming. In most cases in can be accomplished but I pretty much assume that once a plant has scale it will rarely be free of it. Keep in mind, though, if it touched another plant while the scale is in the crawler stage, crawl they will. Inspect, inspect, inspect.

One treatment that does work well on scale is oil — superfine horticultural oil. Some plants are sensitive to oils but the highly refined horticultural oils are safe on most plants, but not ferns. Persistence is still the key, though. One spray of oil will not kill all the scales. Those that are well covered will suffocate but those under them or in cracks and cervices may escape coverage. For this reason, repeated spraying is important and even after a couple of months of four or five sprays never assume all the scale is gone. The plant in question should probably continue to be treated at least twice a year or more. Light horticultural oils will also give a nice sheen to your foliage plants.

Spider mites will also be apparent with your hand lens. They are tiny, eight legged and most often on the underside of the foliage. They give more clues to their presence than scale does, though. Large populations of two-spotted spider mites, or 2SSM, will leave a stippling on foliage that results in yellowing. They prefer the tops of plants and can often be found on indoor miniature roses, palms and gardenias, though they will thrive on many other plants.

If you’re spraying for scale you’ll also catch the mites but you need excellent coverage. It may be just as easy to find a shower, mudroom or another safe place where you can spray your plant with plain water, give it shower or a bath. The mites simply wash away, but this will leave eggs behind so this needs to be done every few days for about two weeks. Then don’t stop looking. One missed egg can result in a quick reinfestation.

I know it’s a lot of work, but the natural predators that would control these bugs aren’t present in our homes so we need to step in. Remember, you need a 10x jeweler’s loupe. Always inspect new plants before you bring them home and inspect them regularly once home.

Cane plants like the Dracaenas and Dieffenbachias can be pruned now if their canes are long and nearly leafless. Make clean cuts so a foot or less of cane remains, and it should sprout new growth in three to five weeks. The tips or canes that are removed can be rooted in wet sand or vermiculite and the canes can also be pressed horizontally on to soil in a flat. With warm soil dormant buds along the canes will sprout into new shoots. Don’t bury the horizontal canes. As the shoots root you can use a knife to cut the newly emerged plant, roots and all, and pot it up. A 1-foot piece of Dieffenbachia cane can result in 10 to a dozen new plants. Dracaena canes even more.

March is also prime time for repotting houseplants. Two signs that can indicate a plant needs to be potted up is when it dries out and needs watering often and when it begins to drop lower leaves as the constricted root mass can only support a limited shoot mass. It’s a trade-off the plants make to survive, and they don’t ask if it’s OK. More on this in a few weeks.

It’s also time to check on any Dahlia or Canna tubers you may have stored for the winter. If boxed or bagged, you can uncover them or stick your hand into the storage material. Feel for rot and soft spots. If you find any remove that tuber and inspect it. Many times the “bad” spots can just be cut out and the tuber placed back in the media. Badly rotted tubers should be discarded with the packing material replaced to reduce the chance of fungal reinfection. Keep the tubers cool, dry and dark and put back into storage.

Both Canna and Dahlia tubers can be potted up in March and April for early garden planting. Grow them in a bright, sunny window. These will flower early in the season and will also finish early in the season. For fall-blooming dahlias, keep them in storage as long as you can and plant as late as you can. These later-planted dahlias will give you bloom through the fall and often up till Thanksgiving. Keep growing

Adrian Higgins, the gardening columnist for the Washington Post, did a piece on Echinacea in the February 17 issue. It’s worth digging up before you spend big bucks on this plant.

Be careful when sowing garden seeds indoors. The biggest mistake made is in starting these plants too early then planting them in wet and cold soil. Leggy vegetable transplants rarely do well. The exception is tomatoes, which can simply be planted deeper if they’re too tall.

Keep in mind that late April is still our general frost-free date out here for the hardiest of crops. Further east like Montauk and west into the pine barrens of Manorville, Flanders and Westhampton can also be colder and frosty to late April and early May.

Have your garden soil tested for pH as soon as you can. Newer lime products can be applied from late March on and will be effective fairly quickly.

Make arrangements with your tree people to have dormant oils applied to applicable trees and shrubs. This is critical to fruit trees, even flowering ones like ornamental crabapples. Application windows are limited, and this may be the best single thing you can do to control disease and insects. Dormant oils can also be helpful on dormant rose canes.