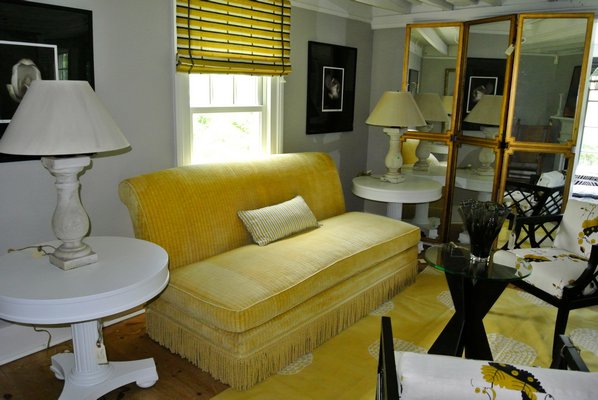 Adam Lancashire makes a spicy margarita behind the bar at The Living Room c/o The Maidstone in East Hampton. MICHELLE TRAURING 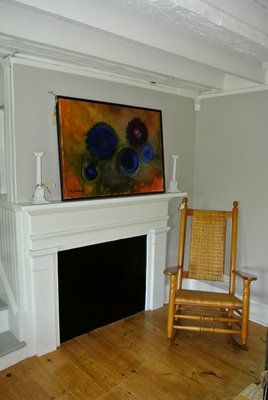 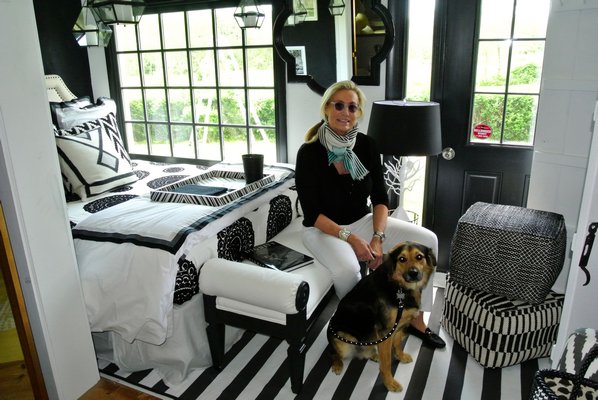 Iris Zonlight with Jai in the room she designed for the Arf Designer Show House. DANA SHAW 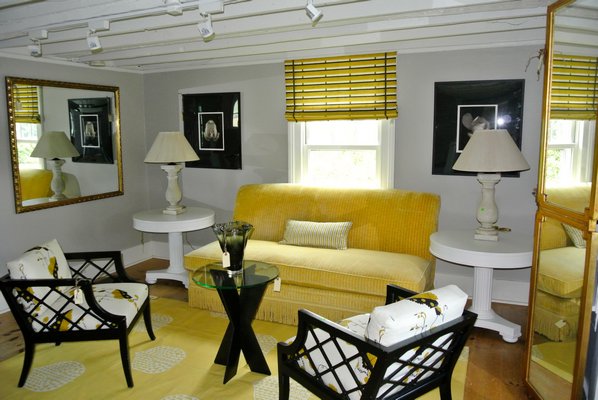 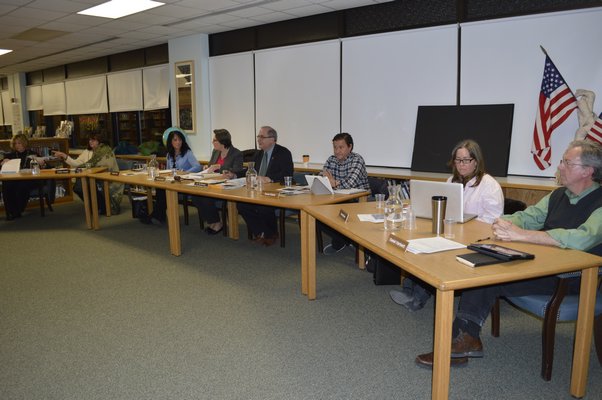 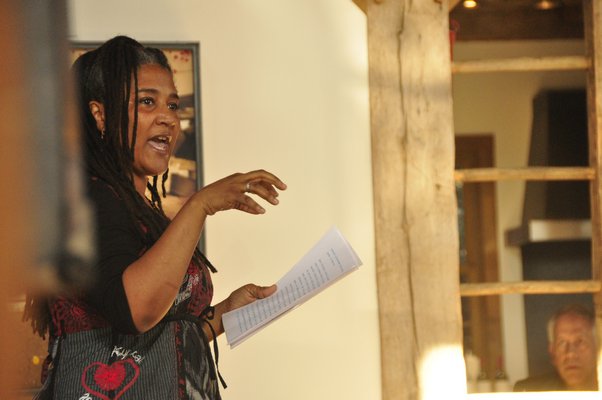 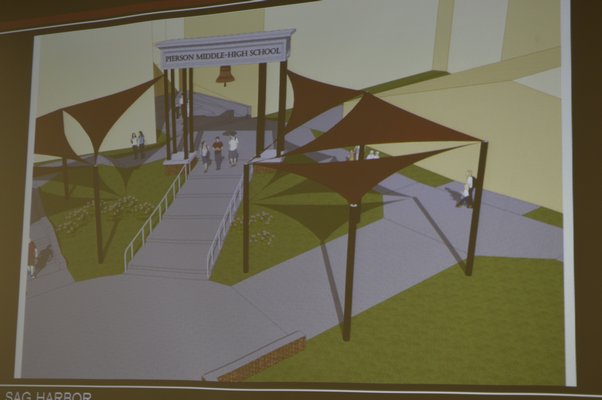 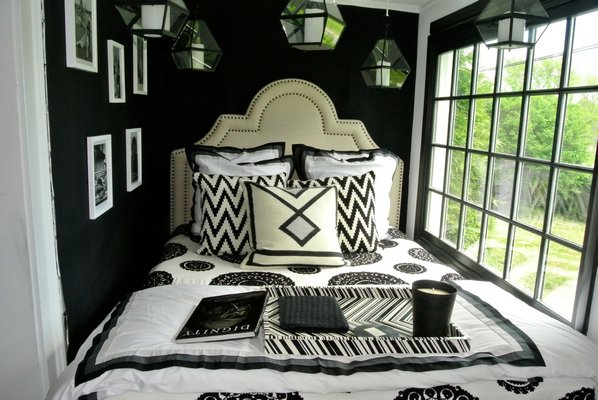 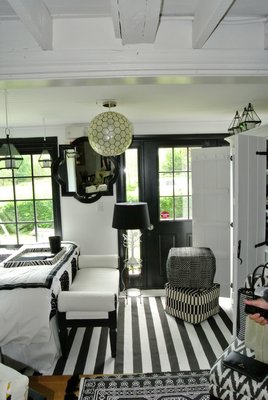 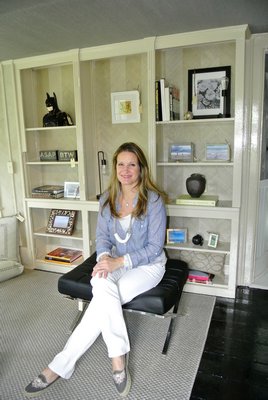 Tamara Fraser of Worth Interiors in the room she designed at the ARF Designer Show House. DANA SHAW 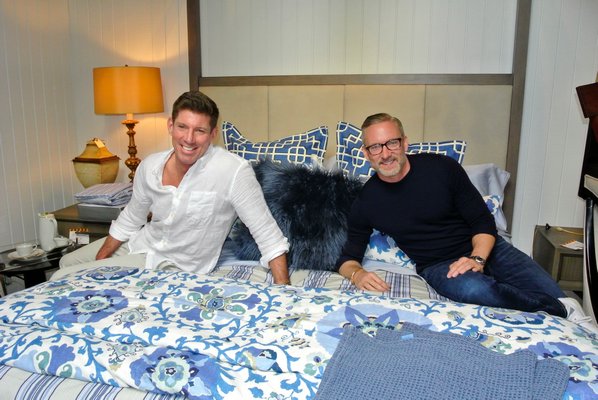 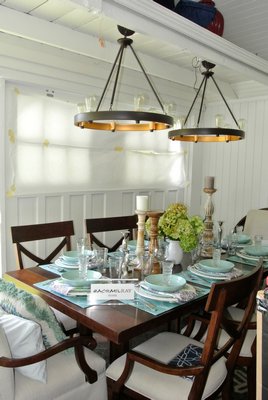 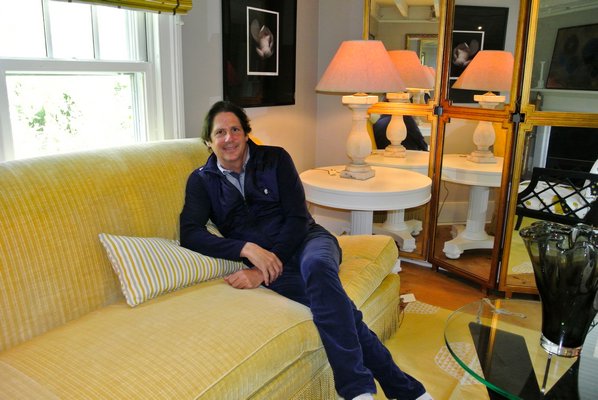 Jeff Lincoln in his room at the ARF Designer Show House. DANA SHAW

Interior designer Iris Zonlight brought her dog, Jai, with her when she met with reporters to talk about the room she created for the Animal Rescue Fund of the Hamptons (ARF) Designer Show House. Jai’s presence was especially appropriate, as Ms. Zonlight adopted the mixed-breed, who was rescued from a kill shelter in North Carolina, just three months ago from the ARF shelter in Wainscott.

An East End resident for 20 years, Ms. Zonlight explained that she’s always had dogs, but never a shelter dog until Jai. “I always come here and shop, but I had never even been to the shelter until after my dog passed away last year. It just broke my heart to see all these beautiful animals, and I wanted to do something to help after I realized how many dogs need a home.

“I loved my other dogs, but this is the sweetest dog I have ever had. I would never buy another dog, I would only adopt.”

In 2016, ARF found homes for more than 1,200 dogs and cats. Many, like Jai, come from kill shelters in other parts of the country. Transporting, feeding and providing veterinary care for all those animals is a costly endeavor, so fundraisers like the Designer Show House at the ARF Thrift & Treasure Shop in Sagaponack bring in much-needed capital.

And while fundraising is the ultimate goal, this event also provides visitors with a glimpse into the richly creative minds of the gifted interior designers who participate.

The designers are each given a dedicated space to make their own. They incorporate items the thrift shop already has on hand as well as pieces donated by their own companies or vendors they do business with. On Saturday, May 27, the doors will open to ticketholders for a preview cocktail party at 5 p.m. Unlike traditional show houses, every item in the ARF Designer Show House will be for sale.

Working with the smallest room, an enclosed porch, Ms. Zonlight, the owner of Blue Ocean Design, didn’t let the physical dimensions of the space restrict her. “It’s such a small space that normally I would put maybe two chairs in here, but that isn’t going to raise very much money,” she said. “So I thought I would just fill it up.”

Blue Ocean’s room is done in black and white, from the knickknacks on the shelves to the pillows on the bed. “I wasn’t really sure what my theme was going to be, but I received a lot of donations from local shops, and I told them I would take anything black and white.

“I love monochromatic colors to begin with, and black and white happens to be my favorite. It never gets boring, and you can change it a little every season if you like.”

“She’s a genius!” exclaimed Michael Murray, the general manager of Rachael Ray Home, taking a peek at Ms. Zonlight’s finished space. “Honestly, this is genius. So many people in the Hamptons have a porch and they would kill to have another bedroom.”

The Rachael Ray Home enterprise was launched in 2016, and it’s their first time at the ARF Designer Show House as well. Despite scoring the biggest space, around 600 square feet, the team still plans to have every usable spot packed with merchandise, including the outside, with outdoor dining and seating displays.

“Because Rachael’s big passion is raising as much money for charity as possible, she gave us too much furniture,” Mr. Murray said.

“We want to have as much product here as possible. We are packing it to the gills with merchandise. We had no intention of making it feel serene and open, we were like, ‘Can we get one more piece of furniture in here?’”

“Rachael Ray absolutely loves animal rescue,” he added. “Her Nutrish brand has raised over $16 million for no-kill animal shelters, and it’s the fastest-growing pet food brand in the country. She gave unconditionally to this—she donated all the furniture, she donated our time. We are lucky to have her.“

“I would definitely say, hands down, Tim has his finger on the pulse of the Hamptons aesthetic,” Mr. Murray said. “The color palette we’re using is all ocean colors—teal, light blue, navy.”

The end result is what they’re calling “curated, but casually curated.”

“It’s planned eclecticism,” Mr. Murray said. “Rachael believes that you don’t have to be rich to live well, and this look speaks directly to that. Tons of stuff in her house comes from resale shops, and yard sales and barn sales, as well as high-end stores. She’ll have original artwork next to a used rug next to something from a garage sale.” For the Show House, the team combined items donated to the thrift shop with new pieces from the Rachael Ray Home collection.

Tamara Fraser of Worth Interiors went for a calmer motif. “We wanted to create a relaxing, comfortable, casual room, just a serene kind of place to sit and relax,” she said.

This is her first year participating in the ARF Designer Show House and she said when a friend mentioned it to her, “I jumped at the opportunity to help them out and show off a little bit.”

Ms. Fraser used some furniture the shop had on hand, giving it a thorough renovation. “This daybed was pink and really poofy, covered in mushy pillows. I took it away and recovered it.” Sleek and elegant now in white, there is no trace of the daybed’s former identity. Worth Interiors donated other pieces of furniture, as well as a multitude of accessories, including a retro Batman bust.

Jeff Lincoln, of Jeff Lincoln Interiors, said that although he’s gotten away from participating in show houses in general, after doing many of them over the years, “this is such a lovely charity that I wanted to support it.”

“My room is just a little sitting room, kind of an English-inflected approach,” he said. “The fabrics are from Nicky Haslam, the walls are in a Farrow & Ball English paint called Purpeck Stone. Madeline Weinrib, who makes fabulous textiles, donated the rug, and the Bakes family from New Canaan, Connecticut, donated the sofa. The rest of the items are repurposed from the thrift shop.

“I like to take an overall simple approach to things,” he said. “But I didn’t want to be so understated as to not be visually interesting. For example, I always like this Nicky Haslam fabric that replicates a Venetian blind. It’s very effective when you make a Roman shade of it because it really looks like a Venetian blind. I thought it was witty.”

Several adoptable ARF cats and dogs will be on hand to meet guests during the preview cocktail party on Saturday, May 27. General admission is $150 starting at 6 p.m. Or for $250, guests may arrive at 5 p.m. to enjoy an exclusive preview hour. For tickets, visit arfhamptons.org or contact Jean Schiavoni at 631-537-0400, extension 219, or jean@arfhamptons.org. The show house will continue Sunday and Monday from 10 a.m. to 4 p.m., with a suggested donation at the door of $10. Children attend free.

A green lawn can be achieved without the synthetic fertilizers and toxic pesticides associated with ... 23 Jan 2020 by Brendan J. O’Reilly

Four Fountains, one of the most unusual houses in Southampton Village, with an equally storied ... 9 Jan 2020 by Anne Surchin, R.A.
Sign in to comment