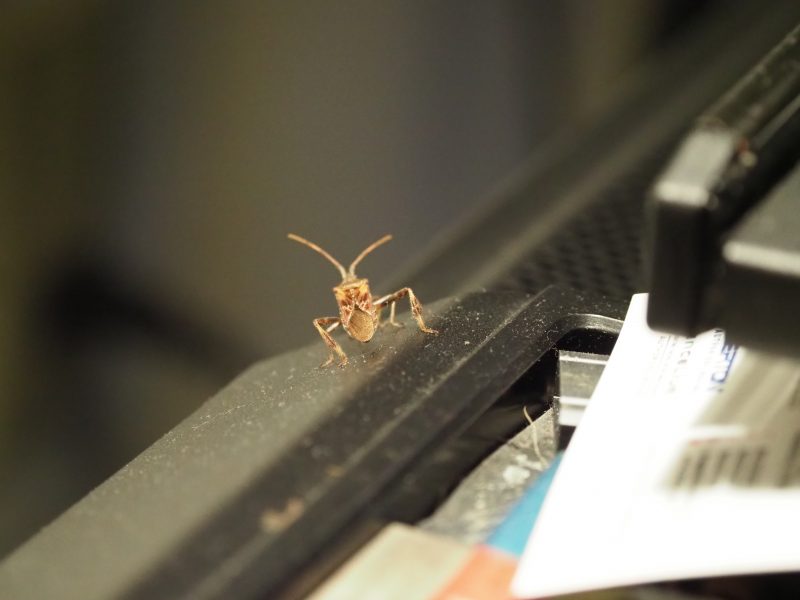 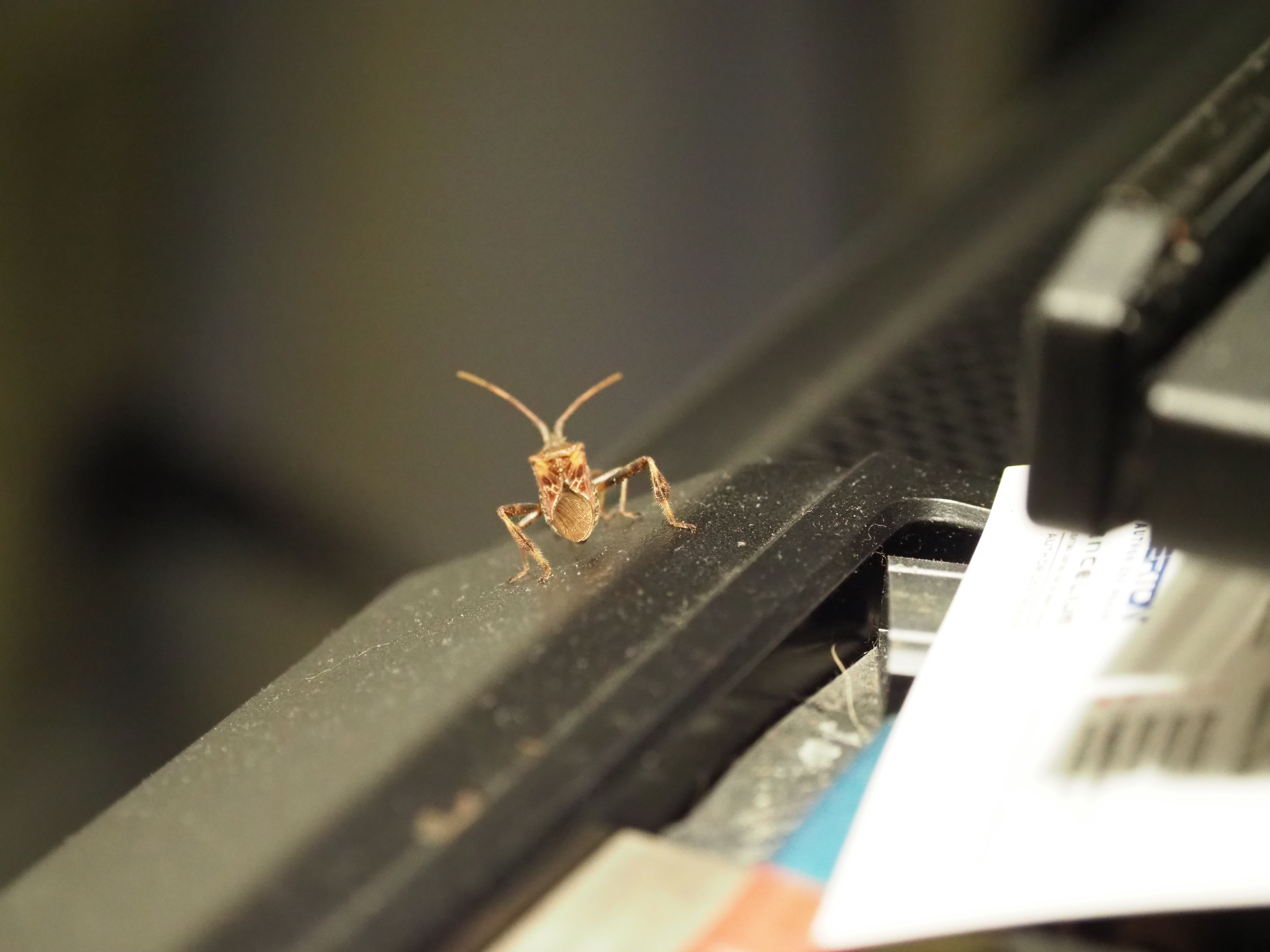 As I was writing this weekŌĆÖs column this western conifer seed bug landed on the case of my computer. One of our fall invaders, it emits an evergreen to turpentine odor when crushed but causes no damage when it gets indoors. 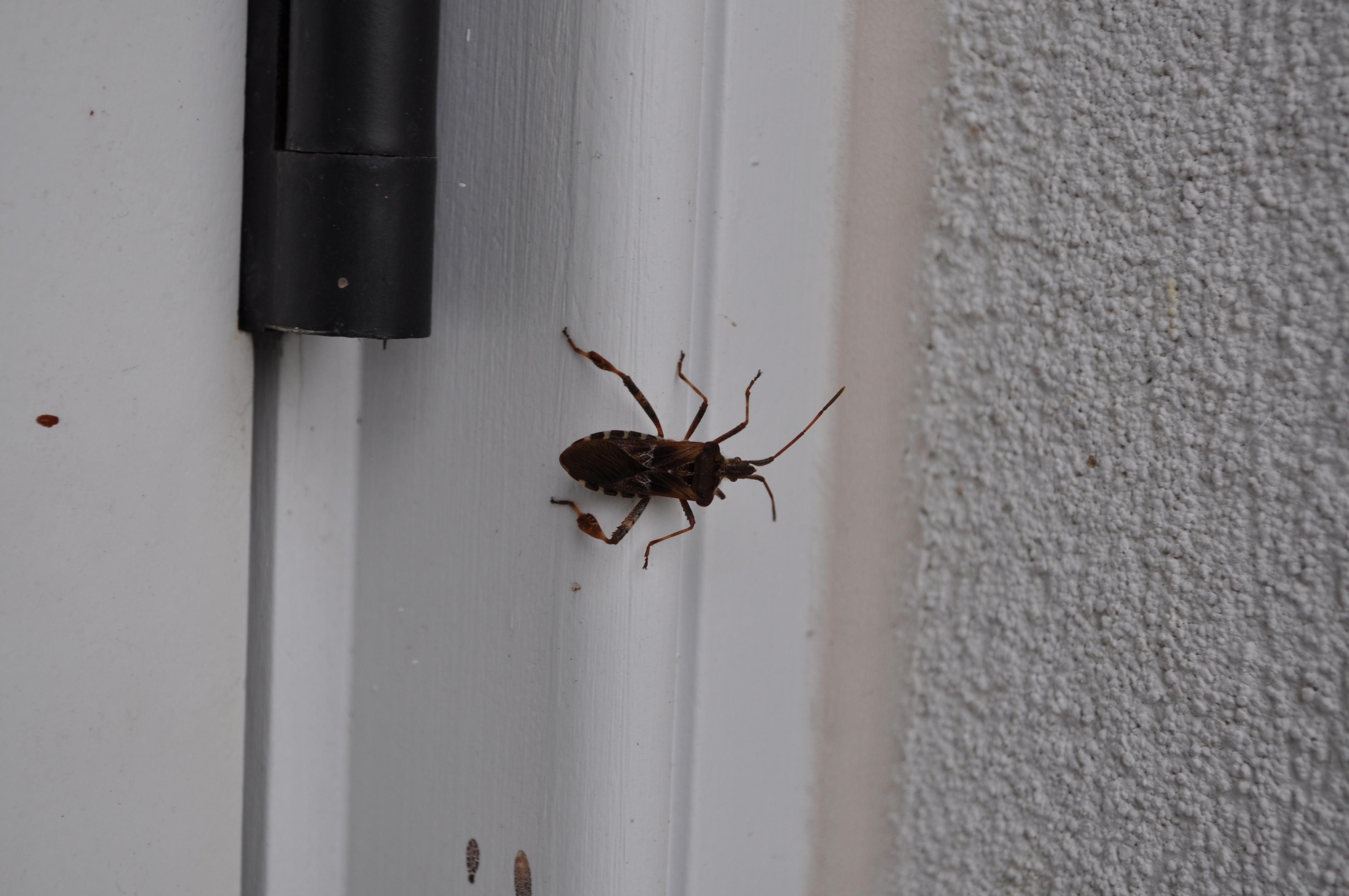 Spotted near a gap in a doorjamb, this western conifer seed bug shows a characteristic ŌĆśpaddleŌĆÖ on its rear legs that are not present on the rounder marmorated stink bug. ANDREW MESSINGER 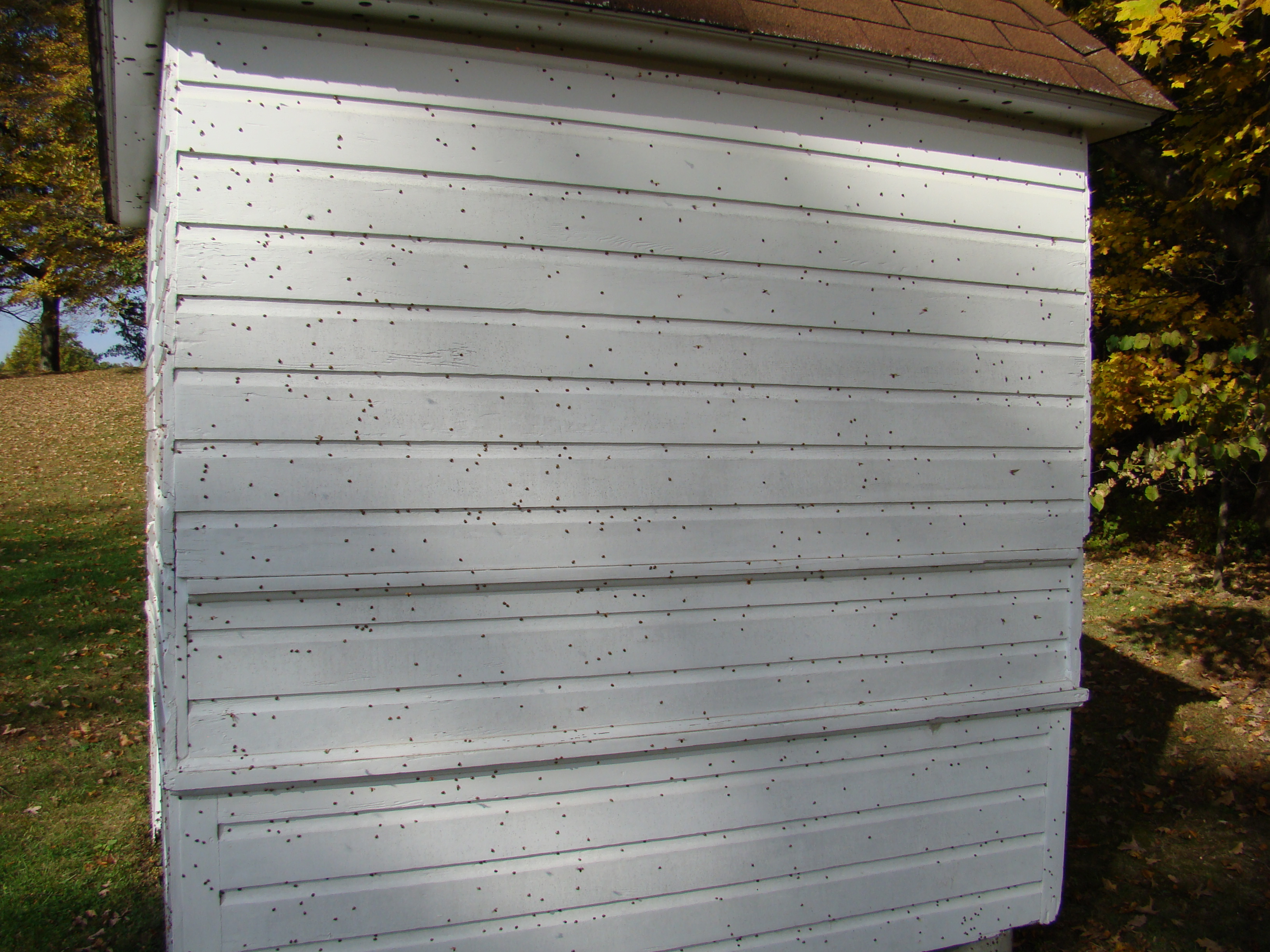 The south-facing side of this shack was covered with orange Asian ladybeetles on a warm fall day. As the day cools they will seek cracks and crevices to enter the building and when cold enough they will spend the rest of the winter in cracks inside the shack. If they get inside a house donŌĆÖt crush them as they can stain and emit a foul odor. They are best vacuumed up. ANDREW MESSINGER

As I was walking back to my office last week on a cool and bright fall day an orange insect zipped past me and landed on a nearby oak leaf. It was immediately clear that it was a ladybug.

The sighting made me realize that the weather was just perfect for the fall invaders. These are the insects that love to be on the warm, south sides of our houses during the day, but as the sun falls and the air cools, they seek refuge indoors. The ladybugs along with the stink bugs have an uncanny ability to sneak through the tiniest of cracks in our walls, window frames and foundation sill plates where they seek refuge from the cold.

Unfortunately, the lady beetles are not really the kind we want. These are the Asian ladybird beetles that have become invasive and squeezed our native ladybugs out of the picture, and when they are crushed or captured, they emit a very foul odor. The stink bugs, most recently the brown marmorated stink bug (BMSB), may not invade in the numbers that the lady beetles do, but they can smell just as bad, or worse.

The BMSB, unlike some of the other stink bugs, has become a major insect pest of the landscape and has quickly become widespread since it was first discovered in the East in the late 1990s. ItŌĆÖs distinguished from other stink bugs by its coppery or bluish metallic colored punctures on its head and body. Bottom line though ŌĆö when crushed or annoyed, it too emits a foul odor.

And like all of the bugs and beetles discussed, it will seek the smallest of openings in a foundation, doorsill, windowsill, fascia, chimney or other crack or crevice that will get it into your house.

But letŌĆÖs go back to an October morning several years ago, which was one of the coldest October mornings weŌĆÖd had in a while. There was some scattered frost, but the time of the season hit me particularly hard when I went to pick some faded flowers off a potted mum and the flower was frozen solid. The next day, however, the temperature was back around 70. I donŌĆÖt know if it was a coincidence or if the sudden swing in temperatures was the trigger, but suddenly on the warmer of the two days my office and the entire building was swarming with Asian ladybird beetles. It only took one very cold fall night followed by a sunny warm day to stimulate the invasion.

These beetles are not the only fall home invaders of the six-legged type. In fact, each region of the country seems to have four or five bugs that just canŌĆÖt wait for the cooling of the fall to come on in and join us. These are all insects that quietly and inconspicuously go about their business outdoors in our gardens in the summer but who seek overwintering shelter in our protected sites. None of them bite or sting, but their sheer numbers, rude behavior and some distinguishable odors make them unwanted visitors.

In most years, and yes, these invaders can vary from year to year, the most prevalent of these visitors had been Asian ladybird beetles (ALB). It is a dull orange color and has anywhere from zero to 19 black spots on its wing covers. They are very effective predators and feed on such landscape and garden pests as aphids, scales and a few other insects. However, in late summer and early fall they congregate in large numbers, often in the thousands, and seek shelter. They tend to be attracted to homes whose exteriors are light in color with southerly exposures and somewhat exposed, but they are also equal-opportunity shelter seekers.

Tightly sealed windows and well-maintained exterior house trim helps a great deal in keeping these insects outdoors, and if you have a large number making it into your living spaces you can assume that the cold winter winds can do the same thing. Some caution needs to be exercised, however, when trying to get rid of them as they can exude an orange colored liquid when annoyed, swatted, swept or crushed and the liquid can leave stains on fabrics. The best and easiest way to collect and get rid of them is to use a vacuum cleaner. Contrary to current rumors, these beetles do not bite.

The western conifer seed bug is another relative newcomer to the East End. It also invades homes in the fall but usually in much smaller numbers than the ladybugs. This bug is about three quarters of an inch long, has gray and brown coloration and greatly resembles a squash vine bug. Its size and slow movements can be quite alarming to some but they are relatively harmless. However, when handled or crushed, they also exude a foul smelling odor.

The birch catkin bug usually becomes noticed prior to all the other invaders that weŌĆÖll look at. Immatures of this Lygaeid hemipteran often develop in the seed capsules of azalea, rhododendron and Japanese andromeda. They will congregate in large numbers in birch trees (especially the white barked birches) in August and September. From there they may move to the sides of homes and buildings. These insects are rather small and may not actively seek to be in homes. They seem to hitch rides on the clothing of people who pass by them or on household pets that walk near them. And yes, again, these bugs can exude a foul-smelling odor when crushed.

The box elder bug spends the summer using its piercing-sucking mouth to feed on seeds, especially those of the box elder tree (Acer negundo). This half-inch long, black bug with orange markings will congregate in large numbers on the sides of homes and seek entry. Their presence is often quite alarming and unwanted, which in some instances leads homeowners to finally remove the host female box elder tree thatŌĆÖs just outside. Of course, when itŌĆÖs your neighborŌĆÖs tree thereŌĆÖs a bit of a problem. Unlike the Asian ladybird beetle, which seems to be an annual occurrence, the box elder bug seems to run on a longer cycle and may not be a problem for years, then appear en masse.

Most homeowners quickly lose the unique feeling of curiosity that these insects usually impart, and their emotions soon turn to dread and frustration if only from the sheer number of insects that may come in without the courtesy of even knocking. There are a few common sense approaches that homeowners can take as precautions against these and the other unwanted houseguests.

All doors, windows and attic vents should be inspected every summer for small openings and holes in screens. Caulking around trim and crevices should be checked for shrinkage and damage. Once discovered, the problems should immediately be tended to since pests like the beetles will seek out these holes for potential overwintering sites. Then, on the first sunny warm winter day, they often awaken and continue the invasion.

Once any of these insects make their way into the home, they should be vacuumed up then the vacuum bag should be removed and placed in a tightly sealed plastic bag and moved to an outdoor location. Never, ever use insecticides indoors to kill or control these insects. There are, however, products that can be applied to the outside of doors and windows that seems to be an affective and long lasting repellent. In the case of the ladybugs, some gardeners may want to vacuum up the offenders and store them in the vacuum bag in a cold garage or shed until spring arrives. They can then be released back into the garden where theyŌĆÖll become friends again instead of invaders.

These invasions are usually short lived and just another of Mother NatureŌĆÖs little surprises. Just donŌĆÖt panic and remember that they are soon gone and may be a sign that your house needs to tighten up. Where these bugs sneak in, heat is sneaking out. Keep growing.

WeŌĆÖre within days of the holiday season, and since itŌĆÖs so hard to find things ... 16 Nov 2021 by Andrew Messinger

My annual admonition that itŌĆÖs time to get your houseplants inspected, protected and back indoors ... 27 Sep 2021 by Andrew Messinger

It wasnŌĆÖt too many years ago that if you had lawn problems in the late ... 21 Sep 2021 by Andrew Messinger