It’s Not A Petunia 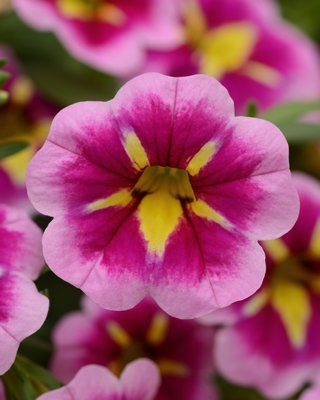 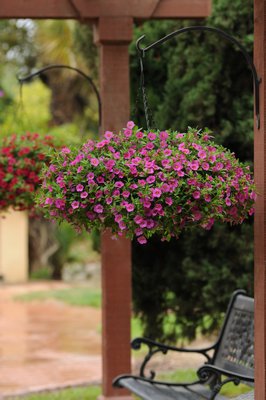 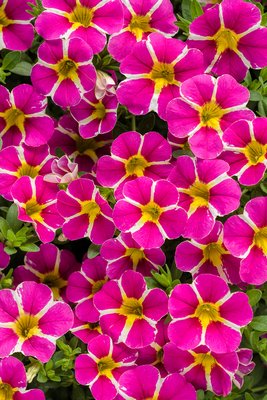 Calibrachoa “Superbells Rising Star” has a pinwheel effect with a white bar and a yellow eye. COURTESY NBG 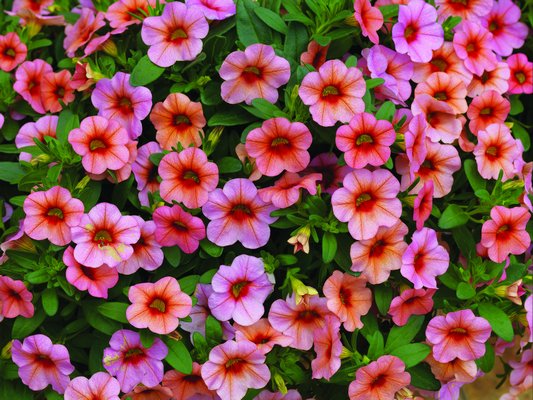 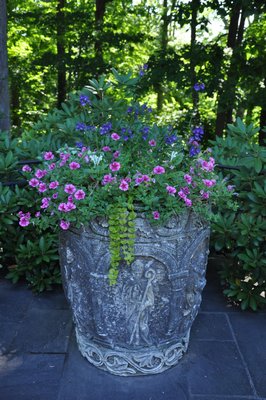 The petunia-like starred pink-purple flowered Calibrachoas draw your attention to this planter while four other varieties of plants provide height, color and a trailing tease. ANDREW MESSINGER

One area of the garden that I don’t get very involved with are pots and containers. But, like you, I see the wonderful pictures in the catalogs and magazines of the magnificent terra-cotta pots and other garden containers that are beautifully planted by gifted design professionals and they can be quite striking.

It wasn’t so long ago that there were very limited choices for these plant containers and there was little experimentation going on when it came using different plant combinations and variations in foliage texture, plant form and the mixing of annuals, perennials, tropicals and even edibles. My, how times have changed.

As these changes began to occur, I remember that for several years I was struck by how the use of petunias had changed. The colors of the flowers, the compactness of the plants and their ability to flower all summer and well into the fall was amazing. Then I learned that what I was seeing weren’t petunias at all, but a plant that had migrated from Brazil with the helping hands and science of some talented Japanese breeders. What I learned was that this was indeed the Calibrachoa and not a petunia at all.

Few types of plants have seen the rise to stardom that the Calibrachoa has. From the first plants trickling into the U.S. market during the late 1980s, to the first of the Japanese breeding, which arrived as “Million Bells” in the early 1990s, things have exploded. Calibrachoas were such beautiful plants but, at first, they were fairly hard to grow.

However, one thing was certain: They did beautifully in hanging baskets and pots, although maybe not so much in the soil of the garden.

As it turns out, container gardening was the future, making them the right plant at the right time. Over the course of the last 20 to 30 years, the Calibrachoa came from Brazil to Japan, to Europe and America, and then into your garden pots. When you consider that most of our other garden flowers have been around since the early 1800s or even the late 1700s, Calibrachoa is still a bit of a “new kid on the block.”

At one time, Calibrachoa was actually a part of the genus Petunia, but was later validated by botanists as a separate genus. There are about 28 different kinds of wild Calibrachoa, similar to the number of different wild petunia varieties (about 21), but Calibrachoas have a much broader range of colors and are capable of generating a more complex mix of colors than petunias. While many people refer to Calibrachoas as “mini-Petunias,” they are not really the same. Calibrachoas’ native territory is cliff edges and rocky scree; from this, they bring some drought tolerance and preference for well-drained soils.

Fast forward to present times, when the problems that made Calibrachoa finicky have been resolved. They are now more tolerant of a wider variety of soils and environments, though it is still a plant better suited for containers than most garden soils. Even with all the improvements, high pH or alkaline soils can be a problem. Calibrachoas have become much easier to grow and have slowly developed into some of the most popular annual flowers sold each year. The thing that really makes Calibrachoas stand out on the garden center shelf is the incredible colors that are available. Every color of the rainbow appears in the small jewel-like flowers, but that is only the beginning! You can have a dark eye in every flower, or if you prefer a bright yellow eye, you can choose a bright yellow star pattern radiating from the center of each bloom. You can have striped blooms, or you can have single or double flowers. There is an amazing palette of colors available in every tone. Some colors will even change based on the temperature, deepening as it gets cooler, or fading as it gets warmer. Calibrachoa is really like the orchid of the bedding plants. The closer you look into each flower, the more intricate the colors become.

If you want to try your hand at growing from seed, it can be fairly easy. There is one seed series that comes in several colors called “Kabloom.” (All other Calibrachoas are grown from cuttings or from tissue culture.) Sow the seed indoors eight weeks before the last frost, don’t cover the seed with soil, just press the seed lightly into the potting soil. The seed likes light to germinate so make sure to keep them where they get a full day’s sunlight. For the fastest germination, keep soil temperature around 70 to 75 degrees. Seedlings will begin to sprout in about 10 to 14 days. It takes about eight to 10 weeks to raise full-grown plants, so plan accordingly.

Growing Calibrachoas requires full sun, at least six hours of direct sun each day, more if possible. A well-drained soil, like most potting soils, is fine. Avoid heavy, cold, clay-based soils, as they smother the roots. Other than that, a balanced acidic plant fertilizer applied regularly will give the plant energy to produce thousands of flowers all season long. In general, Calibrachoas are outstanding performers in containers, but as with all plants, avoid severe dry down and wilting. When a plant wilts, it shuts down all growth and repeated wilting causes the plant to become woody and less vigorous. Restarting the growth and flowering can take weeks and sometimes, depending on how much stress the plant receives, it may never fully recover. Since this is true for all flowers, the best solution is always keeping the soil lightly moist and well fertilized. Gardeners might consider installing a drip system, so that their plants are always receiving some water.

The plant you buy at local garden centers should look just like the picture on the tag. There are still lots of different brands out there, so prepare for many choices when you go shopping. A few of the collection/series names are “Superbells,” “MiniFamous,” “Cabaret,” “Callie,” “Million Bells,” “Cruze,” “Aloha Kona,” “Can-Can,” “Noa” and “Calipetite.” If you are searching for plants for your pots this spring, just try Googling “Calibrachoa flowers” and find out the names of your favorites, then drop by your local garden center to ask for the plants by name or mention them to your landscaper or gardener.

You shouldn’t have any issues with Calibrachoas when it comes to diseases, but if you constantly over water them you’ll encourage potential soil disease issues. Insect problems are also pretty rare but keep an eye out for aphids and two-spotted spider mites. Both are easily controlled when detected early, so as soon as you notice either don’t dilly-dally. Get them under control with an effective organic insecticide.

Calibrachoas make such an amazing statement in your containers with their bright vivid colors, mixed with other flowers or all by themselves. They are easy to grow if you provide the basic conditions they need. Brilliant colors, fascinating streaks and stripes, eye-catching stars, and patterns that resemble the strokes of a brush are available. Keep growing.