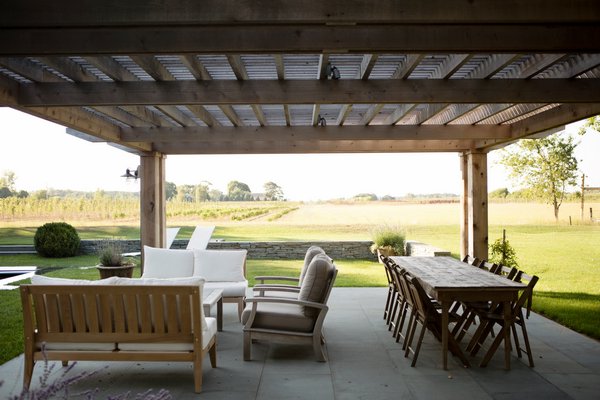 Bill D’Agata and Bill Hall were asked to create a “disappearing fence” outside a custom pool, patio and pergola overlooking a farm and were able to preserve "a clear and special vantage point."

Some consider outdoor living to be a beach chair and a Weber grill, but there’s a whole different world out there—if you have deep pockets and a dream.

“We make the ordinary extraordinary,” said Mr. Hall, whose business partner, Bill D’Agata, has been creating luxury outdoor spaces in the Hamptons for the past 10 years. From simple (but never plain) outdoor showers on the side of antique barns, to free-form pools and upscale dining areas, Pembrooke has run the gamut.

“We primarily work on existing homes,” Mr. Hall said. “Most often we’ll remove what’s in what would be considered a very nice backyard and start over with a clean slate. Then there are no preconceived notions. It becomes a collaborative effort between Bill and the client during the design phase. The outdoors becomes about the living space, which can take shape as a pavilion or a pergola, and then we move on to materials.”

Pembrooke—like the other companies that create outdoor spaces on the East End—has its own stable of craftsmen and artisans to install the masonry and woodwork, along with tradespeople to provide electricity in the form of control panels, ceiling fans, recessed lighting, speakers designed for the outdoors and more.

Pools and tennis courts are often focal points of an outdoor living area, and there is also sometimes the challenge of how to provide structural stability while not compromising on the view. Mr. D’Agata recalled one such challenge that yielded “spectacular results.”

“We were asked to create a ‘disappearing fence’ outside a custom pool, patio and pergola,” he said. “The newly created landscape now overlooks a farm, and we were able to preserve a clear and special vantage point for the borrowed scenery.”

There are basically two kinds of outdoor rooms. There is the pergola, which works best in good weather, and the pavilion, which sports a complete roof system and therefore leaves its use less susceptible to the elements. Of course, the more luxurious of the two is the pavilion, which can showcase TVs and stereo systems while still remaining essentially wall-free.

Michael Marran of East Hampton Fence and Gate also specializes in outdoor rooms. The first item, he suggested, is a fiery focal point, which can range from a fire pit to roast marshmallows with the kids to a full-scale stone wonder, fueled by wood or gas.

“Outdoor fireplaces are very popular,” he said, “because they automatically extend the season. They provide genuine use and pleasure, and can be either a family gathering place or a romantic focal point of an outdoor living area.”

As the outdoor room has gained popularity, corporate home goods stores like Pier One, Frontgate, and One Kings Lane have begun to provide higher-end, luxurious indoor/outdoor accessories like lighting, floor coverings and throw blankets for those chillier evenings.

A do-it-yourself outdoor room could start in the high five figures and rapidly increase from there. And to have an outdoor designer, contractor, construction company and builder involved, the sky’s the limit. But the money shot of the outdoor rooms movement is the open-air food preparation area—which can range from a simple wet bar and fridge to a complete kitchen setup.

Michael Gotowala has gone one step further and started a line of modular outdoor kitchen pieces called the Hamptons Fabulous collection. Some of the available items include the Southampton (a grill island), the Sag Harbor (with two large burners for lobster pots), the East Hampton buffet island with ice drop-in, and the Bridgehampton, which features a pizza oven. The units are also useful, Mr. Gotowala pointed out, for catering large events because of their ability to be moved around.

Mr. Gotowala, who has been feted with awards during his 32 years as an outdoor kitchen designer, recalls that his first nine designs “were Costco kitchens” out of necessity, but said that since then the choices, availability and desires of the clients have changed.

“The size of the space, the footprint, hasn’t changed much, but the ideas inside have exploded,” he said. “It used to be that the outdoor design was tied to the landscaping, but now these are full outdoor living spaces catered to the people who want them.”

The key, he said, is working with a designer who shares the family’s vision.

“It’s important to provide something for everyone,” he said. “The teenagers need their own space, maybe the parents want to enjoy the mesmerizing ‘pop’ of a wood-burning fireplace—it’s a really rewarding scenario when everyone is happy with the design.”