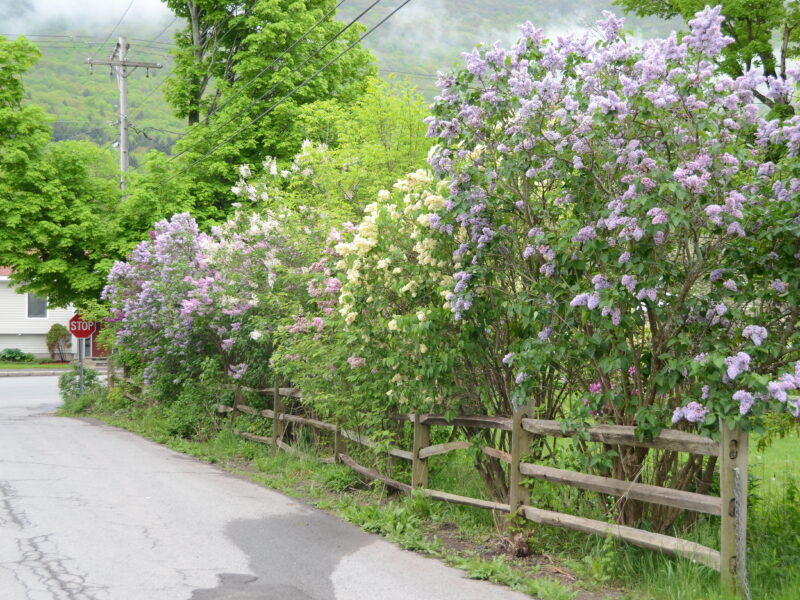 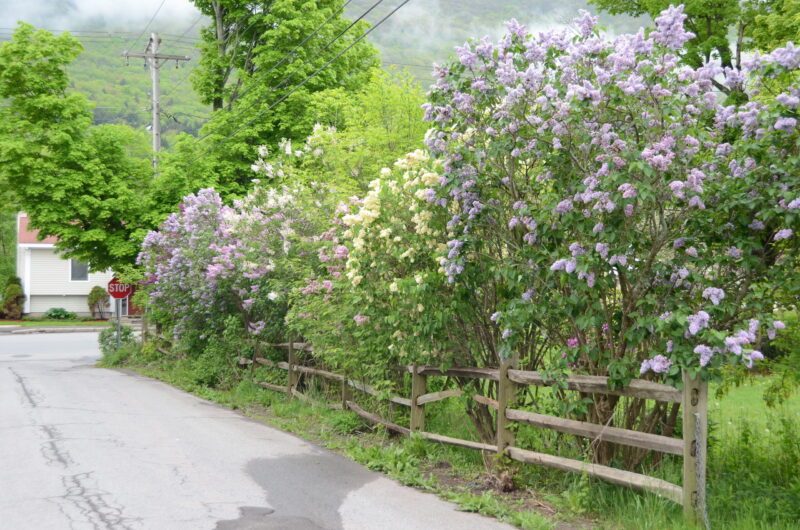 A privacy row of lilacs that are probably decades old and in four different colors. ANDREW MESSINGER 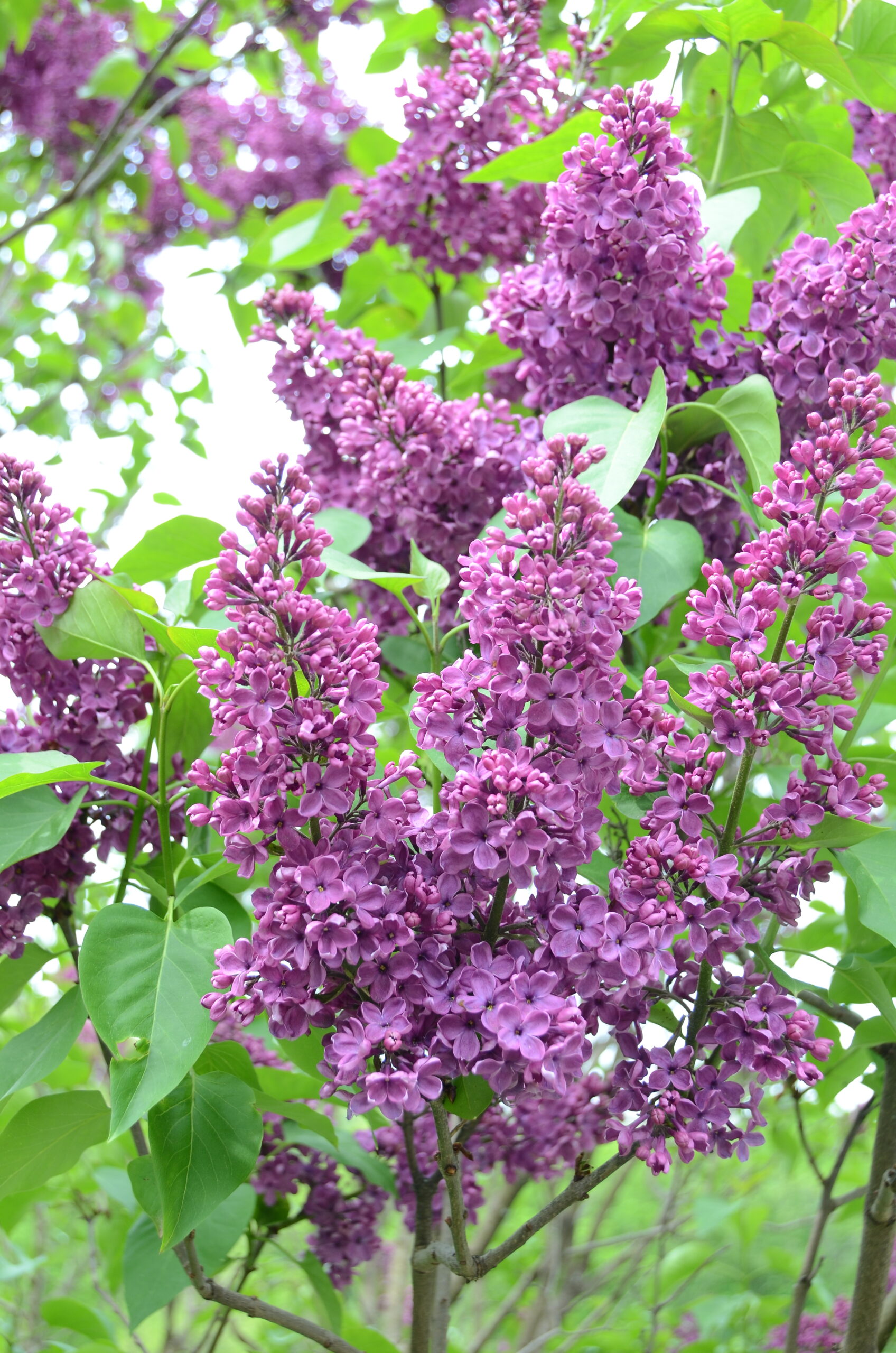 A classic lilac in the classic lilac color. Young pencil-thick stems are the best for cuts, and thinning stems for cuts results in more flowering stems the following year. ANDREW MESSINGER 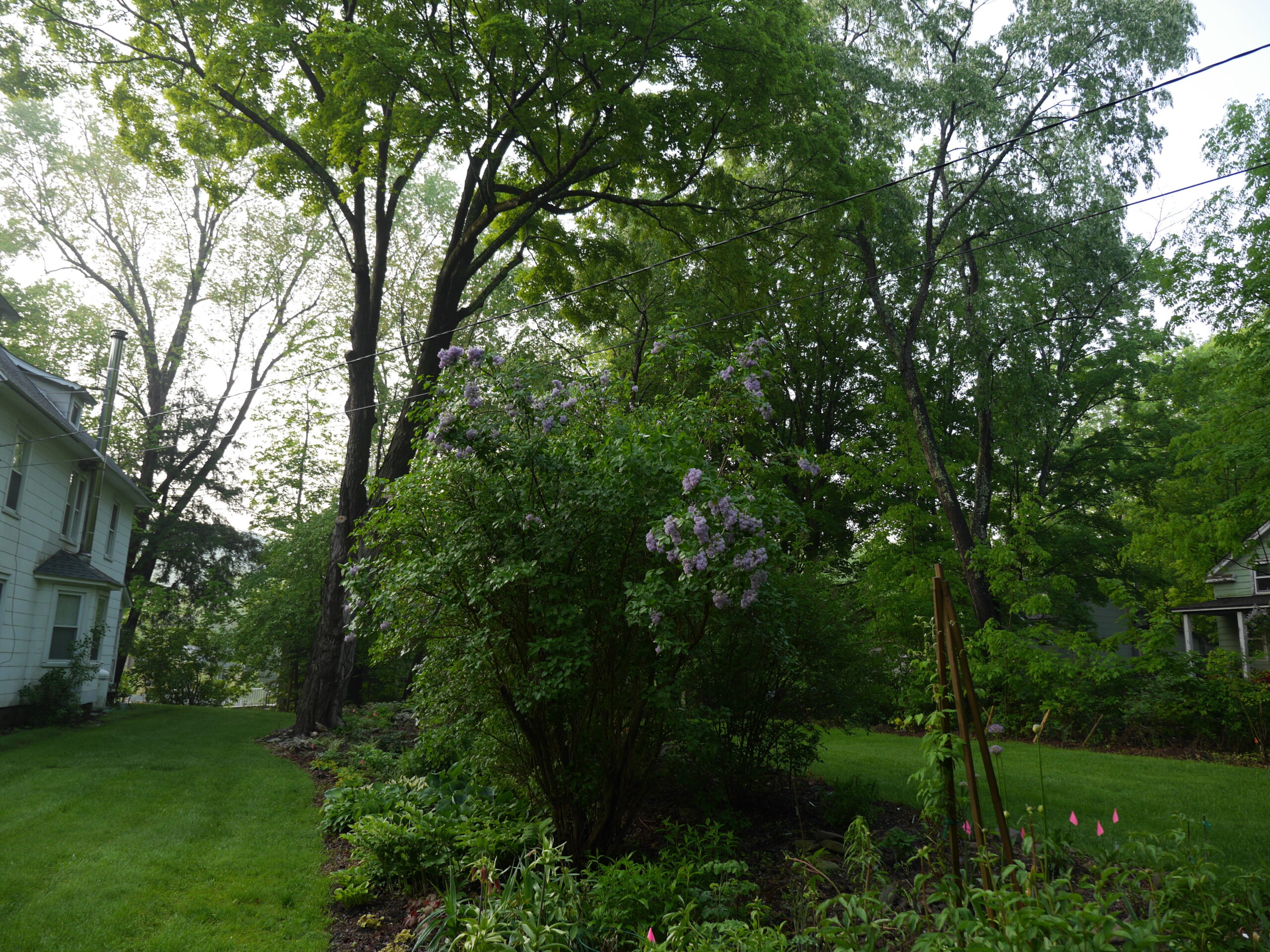 Several older and taller lilacs in the center of this perennial island provide afternoon (this is an early morning shot) shade to the hostas on the left. Miss Kim, on the right, is coming into full bloom as the older species to the left only has a few blooms remaining at the top. ANDREW MESSINGER 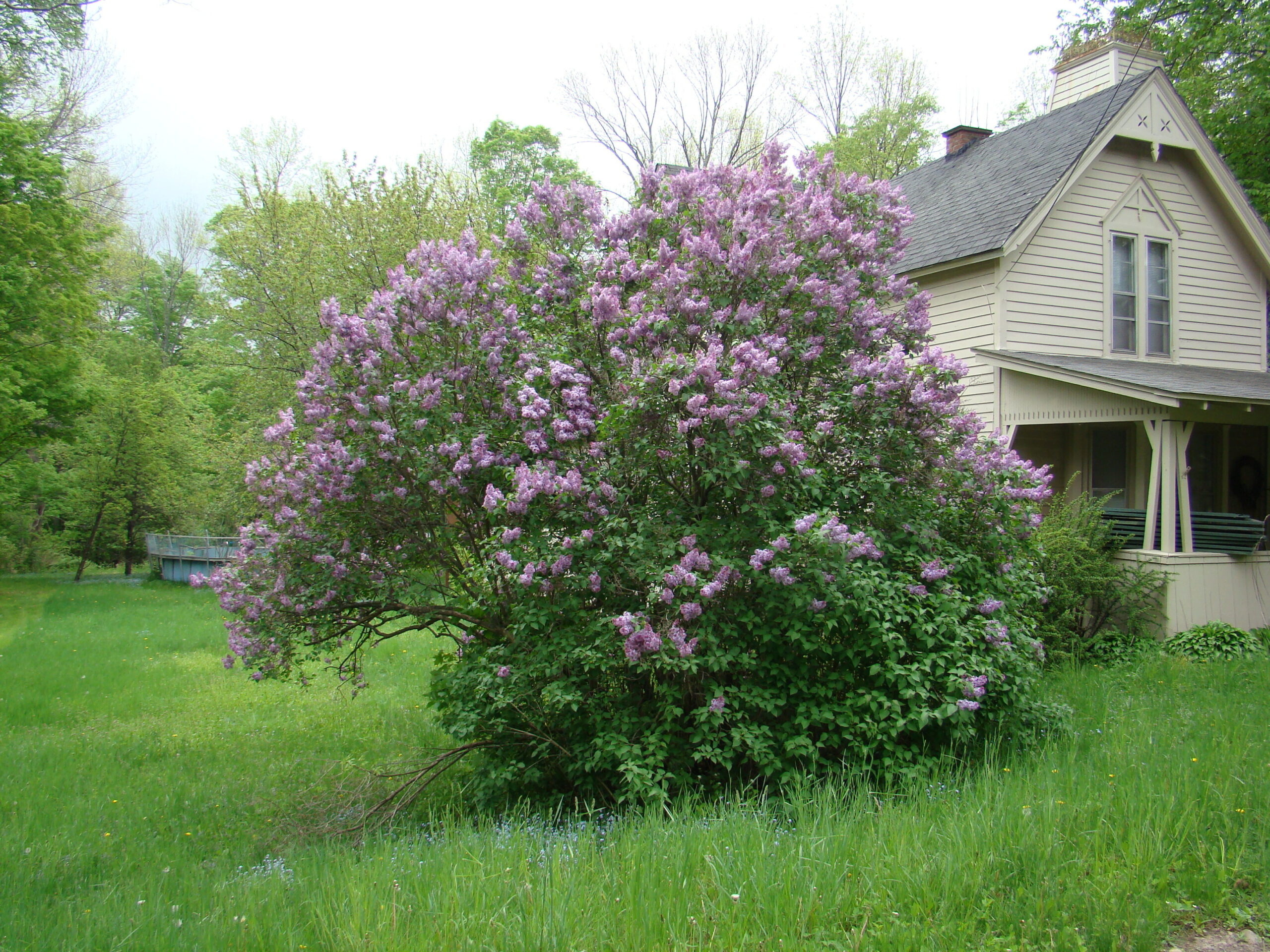 This lilac appears to have been pruned and thinned but not with thoughtfulness. Note the bushy bottom area versus the older and much taller stems and branches. Better planned pruning would have resulted in a more manageable shrub with the taller, older top branches being less likely to break in snow and ice. ANDREW MESSINGER 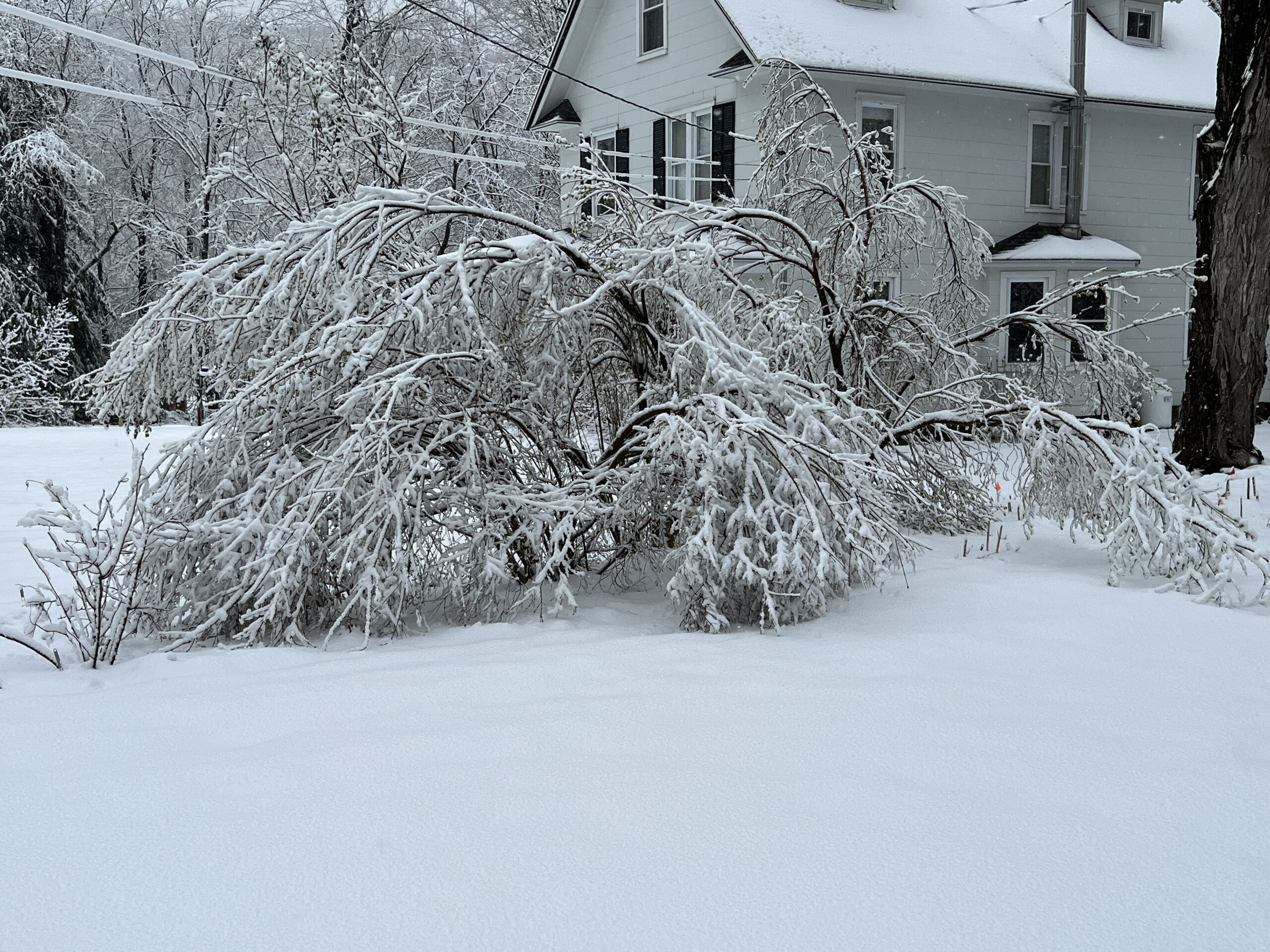 Lilacs suffering from a spring heavy, wet snowfall. Just a few damaged pieces, though, and the next day the shrub was back to its upright habit. ANDREW MESSINGER

Lilacs (Syringa sp.) are what we refer to as an Old World shrub, meaning that they “originated” in Europe.

Lilacs didn’t make it to this continent until the 1600s. They prefer cooler zones and perform incredibly well in the Dakotas and New England. In warmer zones, lilacs can do well, but our warm summers and mild winters can lessen their magnificence.

Out here, the blooms appear from early April and — depending on the varieties used — can last into early June. Lilacs can be used as hedging, property dividers and isolated specimens. More so than their shape and stature, it’s the form and fragrance of lilac flowers that make them so popular.

Considered a shrub, they can grow 20 feet tall but are much better landscape plants when pruned (tamed) and shaped on an annual basis. They have their share of insect and disease issues but neither is a major problem. Mildew is usually the issue out here, but this fungus can be controlled and managed with the use of organic oils such as light hort oils and neem oil.

And while we usually see these plants with flowers of white or shades of lavender and purple, there are also pinks, reds and whites. In older plantings you can often find a single white lilac flowering among a larger group of purple flowering plants as it’s always been thought that when a white-flowering variety is planted in or near a group of purples the white tends to intensify the hue of the purples.

In the 1940s, a yellow variety was developed named Primrose but it never gained in popularity until later in the century. The problem was mostly that everyone associated lilac with the traditional lavender and purple colors, and the yellow was simply considered to be a novelty. There are also Asian varieties of lilacs, and there’s a dwarf form of one, but again, it’s always been considered a novelty as opposed to a cherished specimen.

Most lilacs need several weeks of very cold weather for optimum bud development, and it’s these buds that lead to the glorious flowers. Mild winters lead to mediocre displays. There is an exception, though, and this is in the Chinese lilacs, especially the hybrid named Lavender Lady, which performs well as far south as Georgia. But once you go farther south than New Jersey you’ll find very few lilacs in the landscapes.

As a general rule, these shrubs can survive with less than perfect drainage, but they cannot survive in low-lying areas that are subject to puddling and standing water. Lilacs can also be very susceptible to attacks of powdery mildew, especially out here. No, this mildew does not spread to roses and other plants, as it’s a fungus species that’s specific to the lilacs. The mildew can be controlled with sprays of all-season horticultural oils and neem oil, and there are some home remedies that can work well also.

The shrubs should be planted in soil that’s improved with well-decomposed organic material (as in compost), and it’s often suggested that they be planted on a hill or slope to ensure the best drainage. The root systems are extensive, and one of the complaints that many gardeners have is that the roots send up shoots a number of feet from the parent plant — so watch for these shoots and prune them out as needed. The plus side of this root system is that it can also be used to control erosion on steeper slopes.

There is also a borer that can infect the lilacs. While the borer can do some selective “pruning,” I’ve never found it to be an insect that destroys a plant. A stem maybe, but rarely the entire plant. The tell-tale signs of a borer problem are traces of “sawdust” on the ground below the affected branches.

The shrubs also can get some scale (oils will control this) and aphids. Mother Nature seems to manage the aphids, and I remember one year as I watched a pair of Baltimore orioles methodically inspect a small lilac outside our living room, devouring every aphid in sight in their day-long forage.

There are about 25 species of lilacs, and since there was a great deal of hybridizing and research here and in Europe, Korea and China, you can find well over 175 cultivars including double-flowering varieties and dwarfs that only grow to 24 inches. Proven Winners has been marketing the Bloomerang series of dwarfs for several years, and these grow only 5 feet tall and 5 feet wide. These should do well out here. We’ve had one on trial for several years, though they are only available in purple and pink. Another unique feature of this variety is that it reblooms and in some cases will bloom throughout the summer. Follow the pruning directions for this variety or you can affect the blooming cycle.

When we bought our upstate house about two decades ago there was a stand of old lilacs that was about 20 feet long. I pruned and renovated these old plants and I use them to cast shade on a hosta bed to the east. They provide just enough high-filtered light that the hostas appreciate, and by thinning and pruning them on a regular basis there is rarely a mildew issue.

I went up to spend the long Easter weekend at the house only to find myself stuck in a spring snowstorm that dumped 9 inches of heavy wet snow just as the lilacs were beginning to leaf out. The upright stems and trunks were now arched down to the ground, and a few of the weaker trunks cracked and had to be reduced. But by the end of the day, the shrubs had rebounded and were upright again. Miss Kim (see photo) was unaffected.

Miss Kim is another great, height-tamed variety. This is a Korean variety, and out here it blooms just as the older and taller varieties bloom. I have one planted just to the west of my taller lilacs and this results in a cascade of blooms from the tall species that I often let grow to 15 feet tall down to the Miss Kim in front, which tops out around 7 feet tall. Miss Kim is also mildew resistant and instead of the more upright habit of the older varieties, Miss Kim tends to be ovate or rounded.

Pruning of the older varieties should be done right after flowering. Deadwood should always be pruned out when noted, but on older plants, the general rule is to prune the shrubs about a quarter to a third every year to encourage stronger stems and trunks. This encourages new budding as well as increased air circulation which can help in managing mildew.

What actually got me thinking about lilacs several weeks ago was a new book “Lilacs, beautiful varieties for home and garden” (Naomi Slade, Gibbs Smith publisher, hardcover, $22.99). Slade is a British writer, and the book seems to be aimed at the British market but adapted for the United States. The book is a bit eclectic and seems to jump around a bit, but it does cover (with great photography from Georgianna Lane) 60 varieties of lilacs. It’s a great read, and you’ll get the basics as well as the history of the plant. But it’s the pictures and descriptions of the 60 varieties that make the book worthwhile. While not the definitive book on the lilac genus (which is Syringa) it will certainly whet your appetite for this shrub and help you in your choices. And speaking of appetite, you’ll also find out in the book that the flowers are edible.

Lilacs are not difficult plants, but they do require some attention. Especially the older and taller varieties. For those with smaller properties, consider the dwarf varieties. And those with only decks and balconies might consider the smaller types like the Bloomerang series. These are early-flowering plants with wonderful aromas and make great cuts for the vase and gifts.

One of the greatest lilac displays in this country is in Rochester, where there has been an annual lilac festival for the past 124 years. There are over 1,200 lilac bushes of 500 varieties on display. The festival runs from May 6 through 22, and you can find out more here: rochesterevents.com/lilac-festival. Keep growing.

In last week’s column, we took a look at the magnificent and exotic woody vine ... 14 Mar 2022 by Andrew Messinger

Wisteria: A Vine For The Ages

In a few weeks, some lucky locals with south-facing walls — planted with a magnificent, ... 7 Mar 2022 by Andrew Messinger
×