Lockdown Has Been A Gift To Backyard Pollinators - 27 East 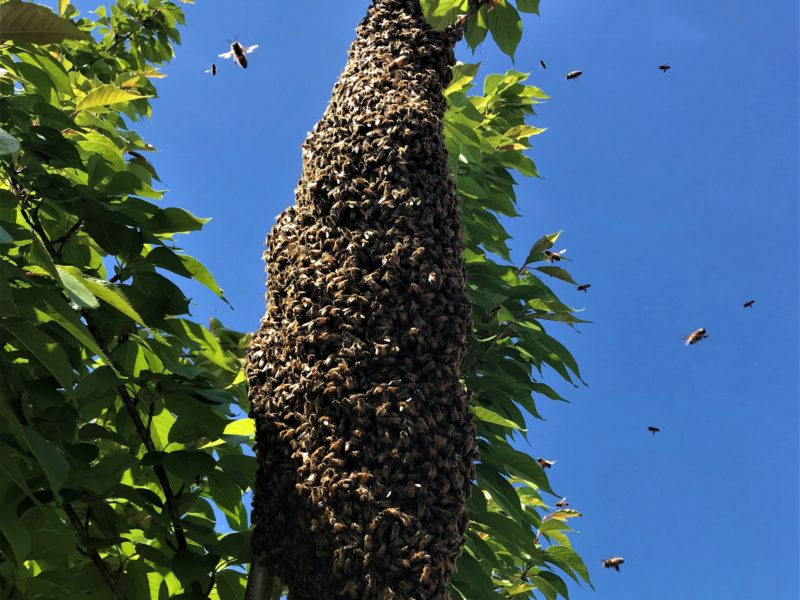 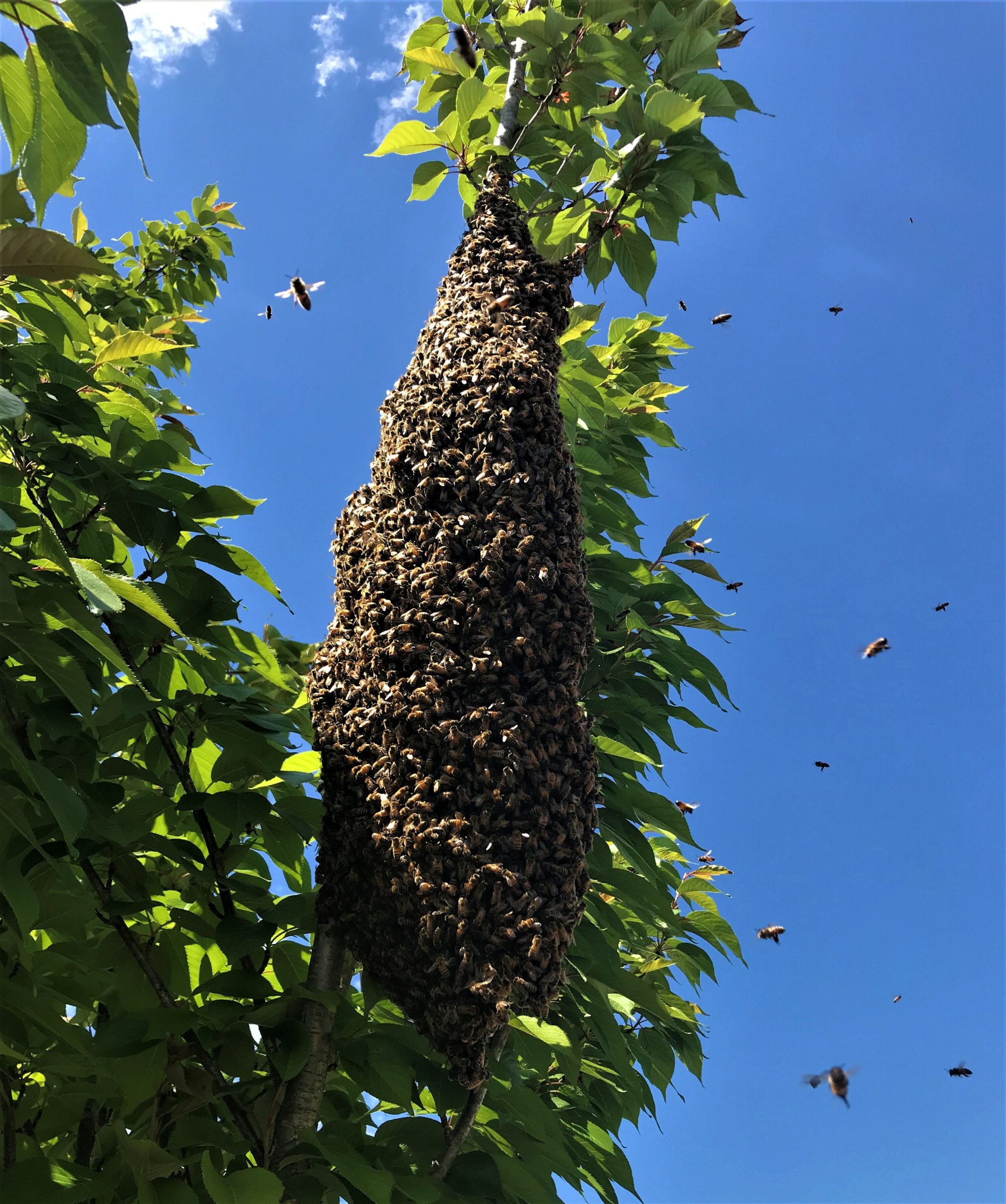 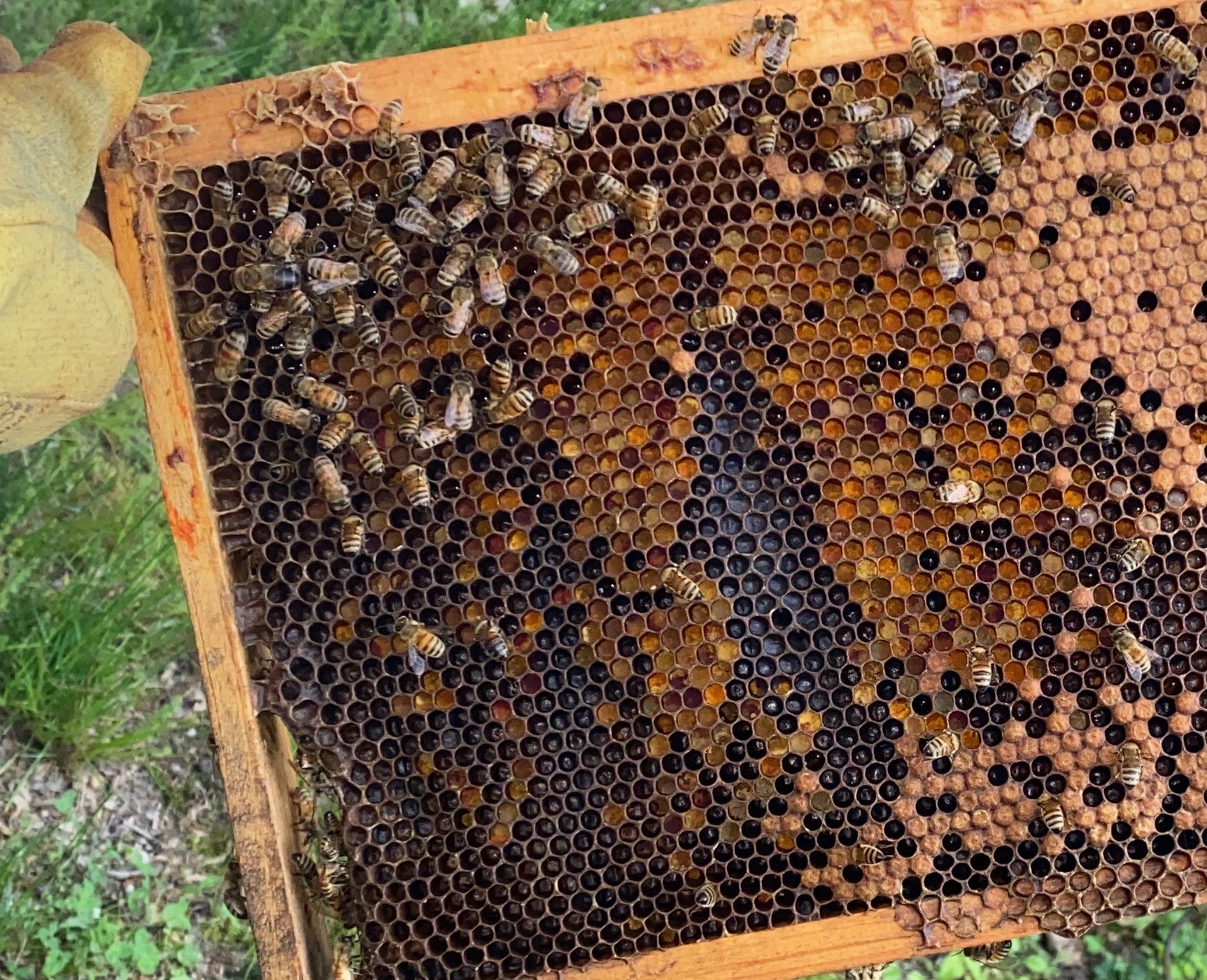 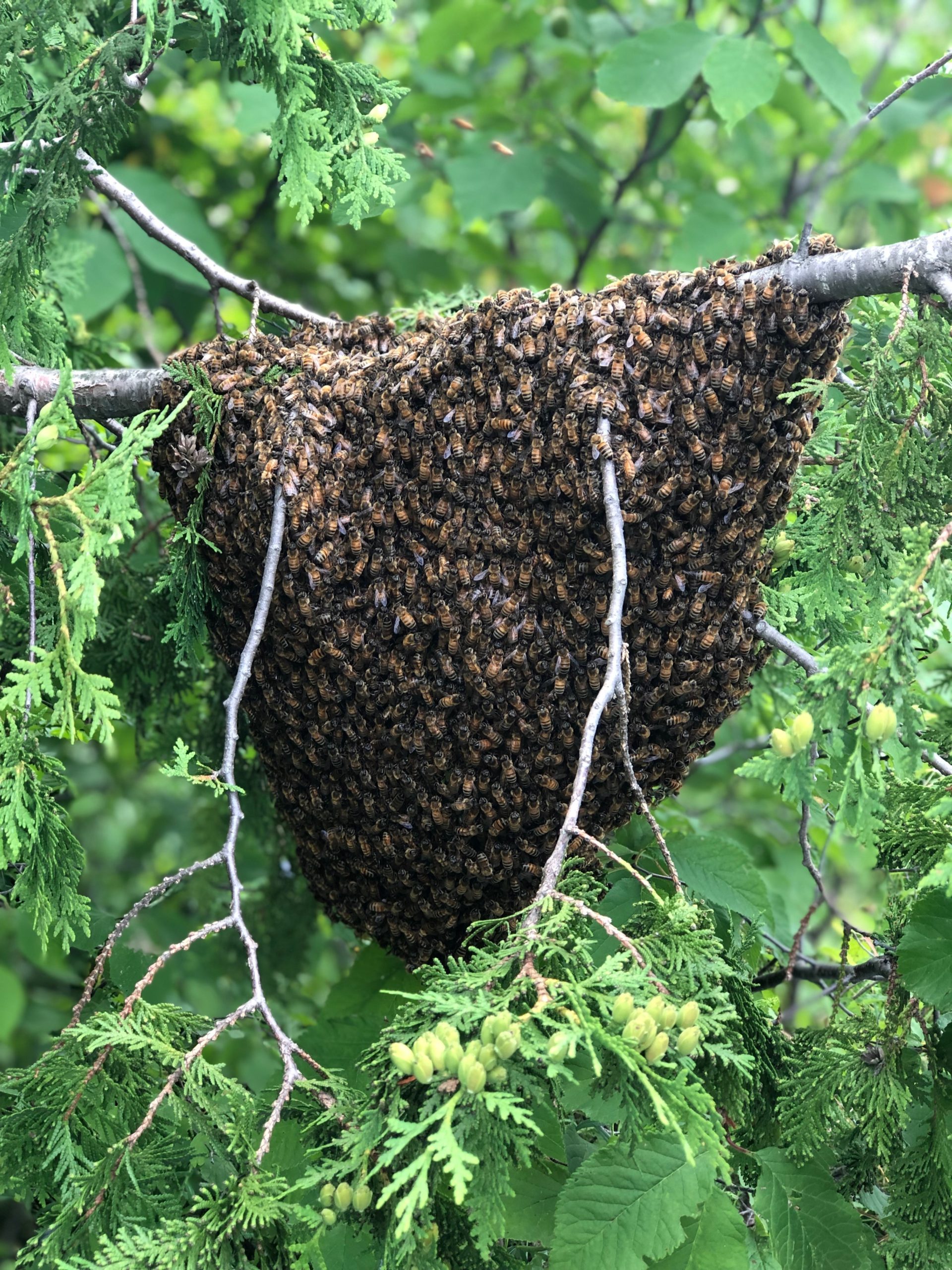 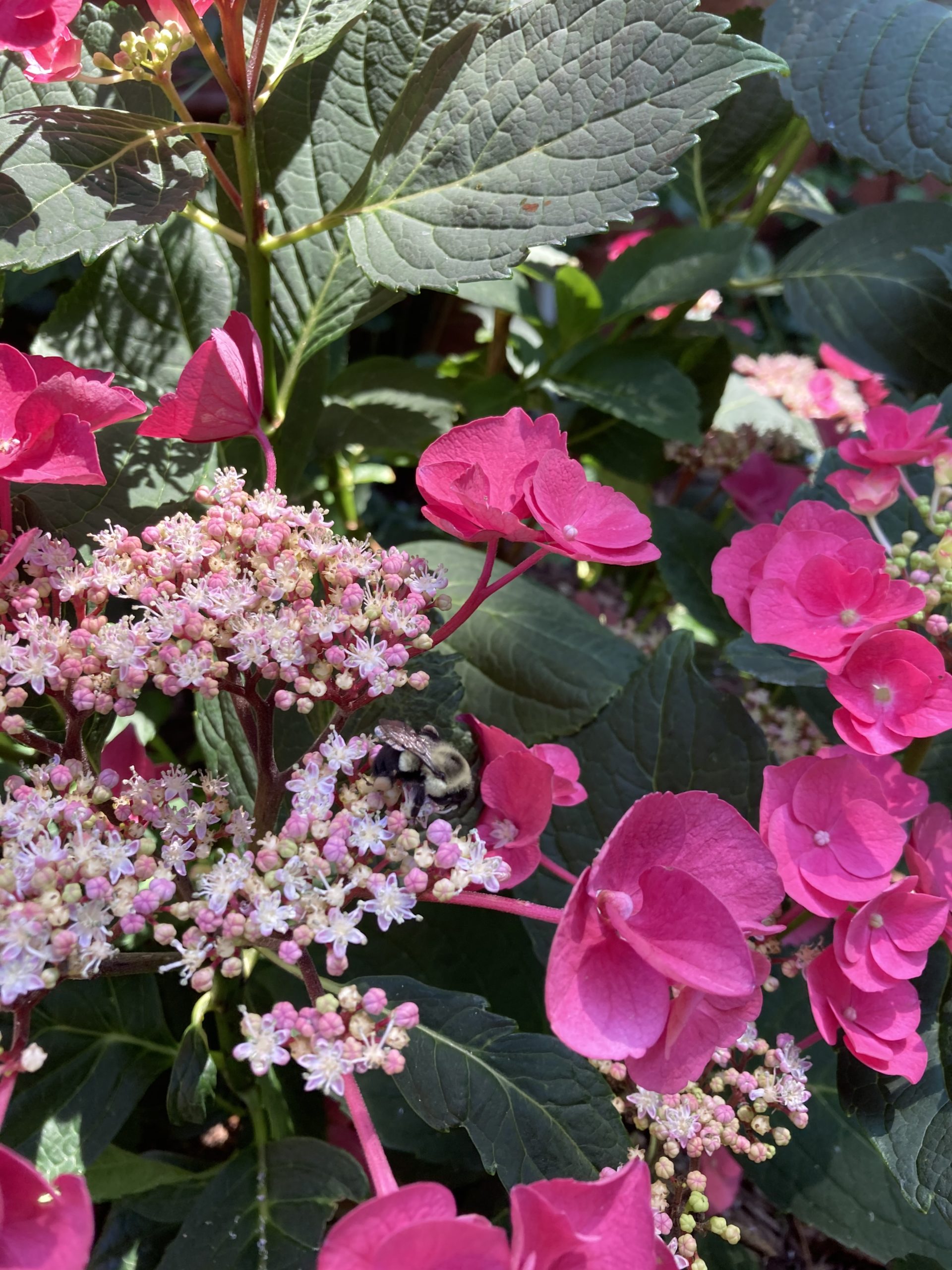 Finding the upside of a global pandemic is a reach for most people. For someone plagued by anxiety like I am, it can be hard to even come out from under the covers in the morning.

When the warnings and lockdowns began to ratchet up, the thought of doing any beekeeping at all made the anxiety even worse. It’s kind of a revolving door. Honeybees are sensitive to the pheromones we send out when we’re anxious — they read them as alarm, and react with their own alarm, which can translate to more aggressive behavior. Of course, anticipating a hostile reaction from the hive only makes the anxiety worse, which makes the pheromones stronger, which increases the chances that the bees will react — you get the picture.

But by early May, I had no more excuses. I finally had to suck it up and dive in. And, as always, it was the closest thing to a meditative calm that I can ever manage. It might be the smell that does it. A subtle blend of honey, flowers and warm beeswax. Or the quiet focus of the bees. No matter what’s going on in the world, they are single-minded in tending to their tasks, the hive emitting a steady, calming hum. Nurse bees feed the larvae, new bees emerge from their cells, foragers bees come and go, bringing pollen and nectar for their sisters to pack away in tiny octagonal storage bins.

It was a lovely escape from the endemic pandemic insanity, and a happy transition to a new season of beekeeping after a depressing early start. We went into winter with four hives all fat and happy. Lots of food stored, plenty of bees, and the winter wasn’t very harsh. But when I took a first look at the hives in early February, three of the four had become tombs, with not a living bee to be found.

Sadly, losing 75 percent of one’s hives isn’t all that unusual. I’m pretty sure the cause was varroa mites, even though I treated all the hives in the late fall, as recommended. As you have no doubt heard, honeybees have an uphill climb, what with pests like varroa and small hive beetles, plus poisoning from the pesticides used to ensure those perfect green lawns too many homeowners demand.

Another challenge for the bees has been the disappearance of flowering trees and plants they rely on for food, as more and more land is cleared to build houses. But this is where the upside to the COVID-19 crisis comes in. Stuck at home with time on their hands, East End residents have turned to the land for comfort and connection. As a community, we’re planting vegetable gardens, sowing flower seeds, nurturing patches of our backyards that we may have neglected for years. My husband and several of our friends have planted potato towers, which are these odd wire, hay, seed potato and soil constructs that will ostensibly overflow with delicious potatoes at some point in the future.

Homes that are normally vacant until Memorial Day came to life much earlier this year with families fleeing more densely populated areas, and a lot of those homes contain children — bored children whose parents are eager for projects to fill up their time and keep them from spending endless hours killing zombies on screen. Many are filling some of that time by planting and tending to flowers and vegetables.

While some local businesses are struggling through or have already closed, garden centers and greenhouses are firing on all cylinders to keep up with demand. Neighbors are exchanging cuttings, children are learning to pause and take pleasure in watching nature unfold at a leisurely pace, instead of rushing from school to sports to a million other extracurricular activities. It’s like Mother Nature has sent us all to our rooms to think about the way we live.

All this planting and nurturing has been a gift to the honeybees, other wild bees, butterflies and other pollinators. Gardens are blooming in nearly every yard, and the wild things are reveling in the abundance.

In early April, we replaced our three dead hives with new colonies. When a check of the surviving hive showed they were very low on stored food, I fed them sugar syrup to make sure they didn’t starve to death after making it through the winter.

Then all the new gardens began to bloom. The bees rejoiced. Every hive filled up with nectar and pollen, and I had to add more boxes for them to use much sooner than I have any other year. COVID-19 isn’t good for much, but it has been a gift to your backyard pollinators.

All of this bounty means that honeybee swarms are also booming this year. As bee colonies build up their numbers, their instinct to multiply kicks in. The colony will make a new queen, then about half the hive will take the old queen and travel to a new home. During this transition, you might see what looks like a big glob of bees hanging on a branch, or even clustered on the side of your house.

Although the sight of thousands of buzzing, armed insects in a giant lump sounds scary, there’s no need for alarm. Honeybees are generally not aggressive under normal circumstances, and when they’re swarming they are at their least aggressive. All of their focus is on getting the queen into a new home, and they have no territory to defend. Unfortunately, a lot of people panic when they see a swarm and reach for the bug spray or call an exterminator. Please don’t.

If you see a swarm in your yard, or if a colony takes up residence somewhere you’d rather it didn’t, please call a beekeeper, not a bee killer. A swarm is the way colonies reproduce, and more bees means more pollination, which means healthier, more prolific flowers and produce.

Think of a swarm as a thank-you from nature for all the hard work you’ve been doing in your garden. A teachable moment for the young gardeners in your family. And a small consolation prize in a really difficult time.