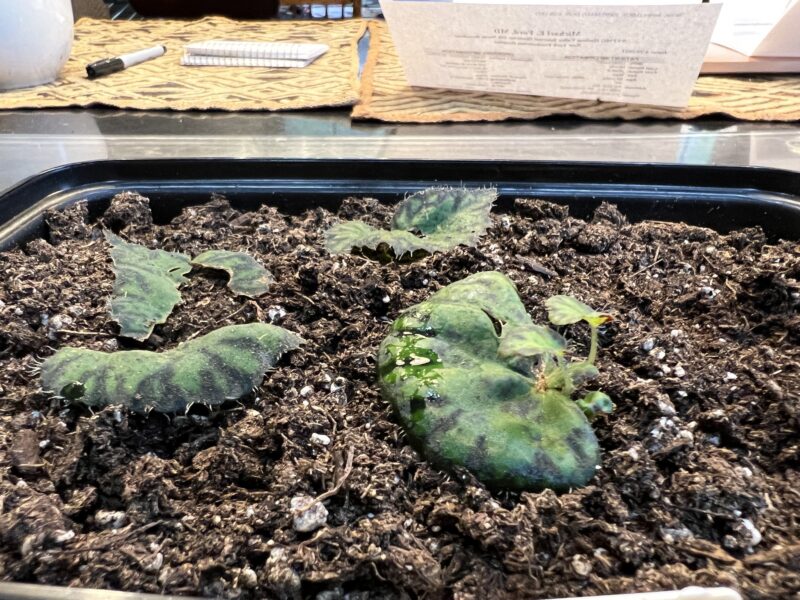 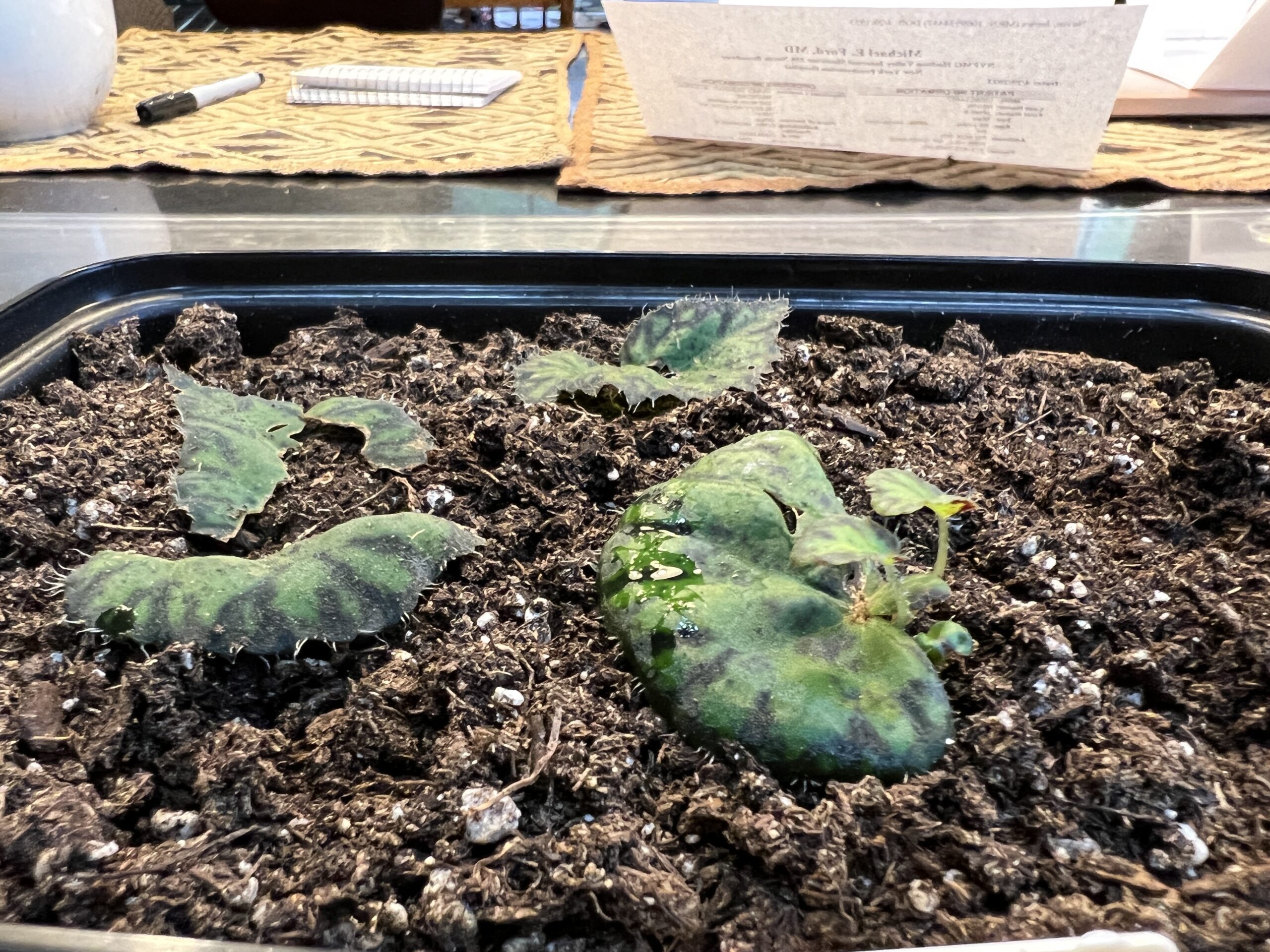 These are the four leaf sections rescued from neighbor Nancy’s "dead" begonia. Kept on moist soil with all the cut edges dusted with a rooting hormone, about seven weeks later a new plant, the next generation, emerged from the leaf on the right. A few weeks later it was cut off with roots and put in a 4-inch clay pot. One leaf section rotted and the two others rooted with no new growth, yet. ANDREW MESSINGER 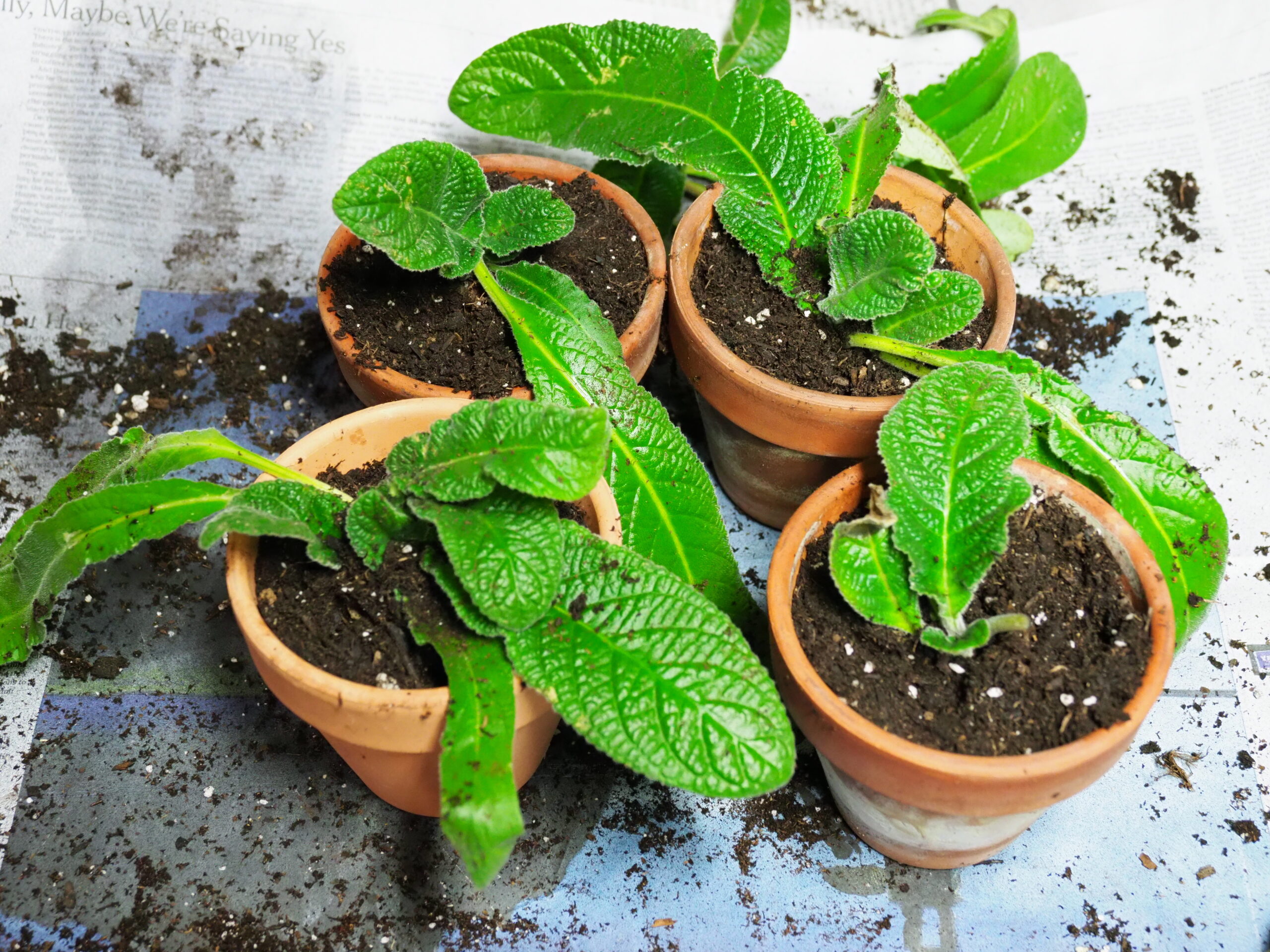 Several weeks later the new plants were potting into 4-inch clay pots and by December they filled the pots and began to flower. 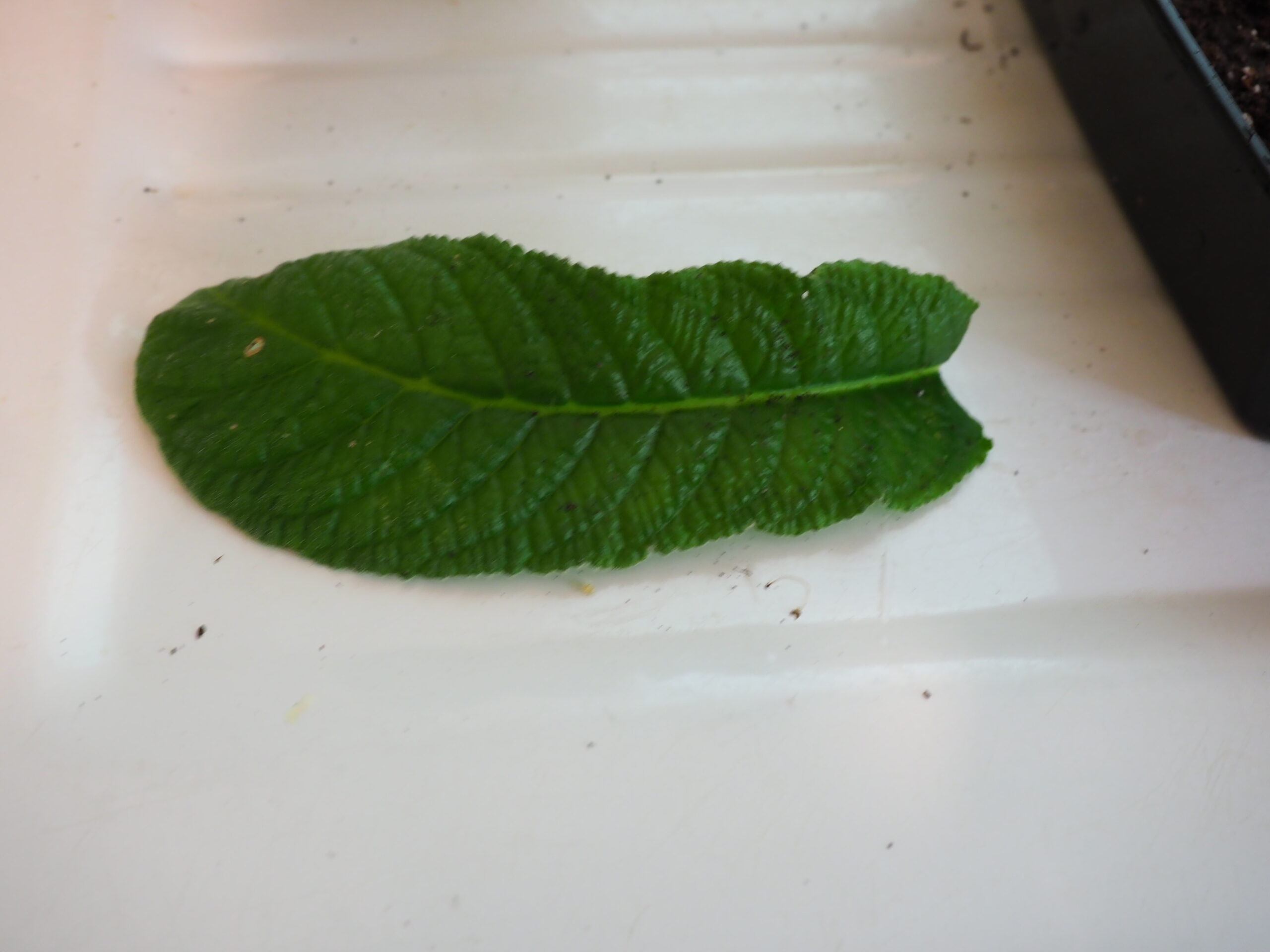 With a leaf removed from the parent plant, the leaf is now ready to be sliced into 1-inch sections with a single-edge razorblade. Sections must be vertical from top to bottom with the midrib in tact. ANDREW MESSINGER 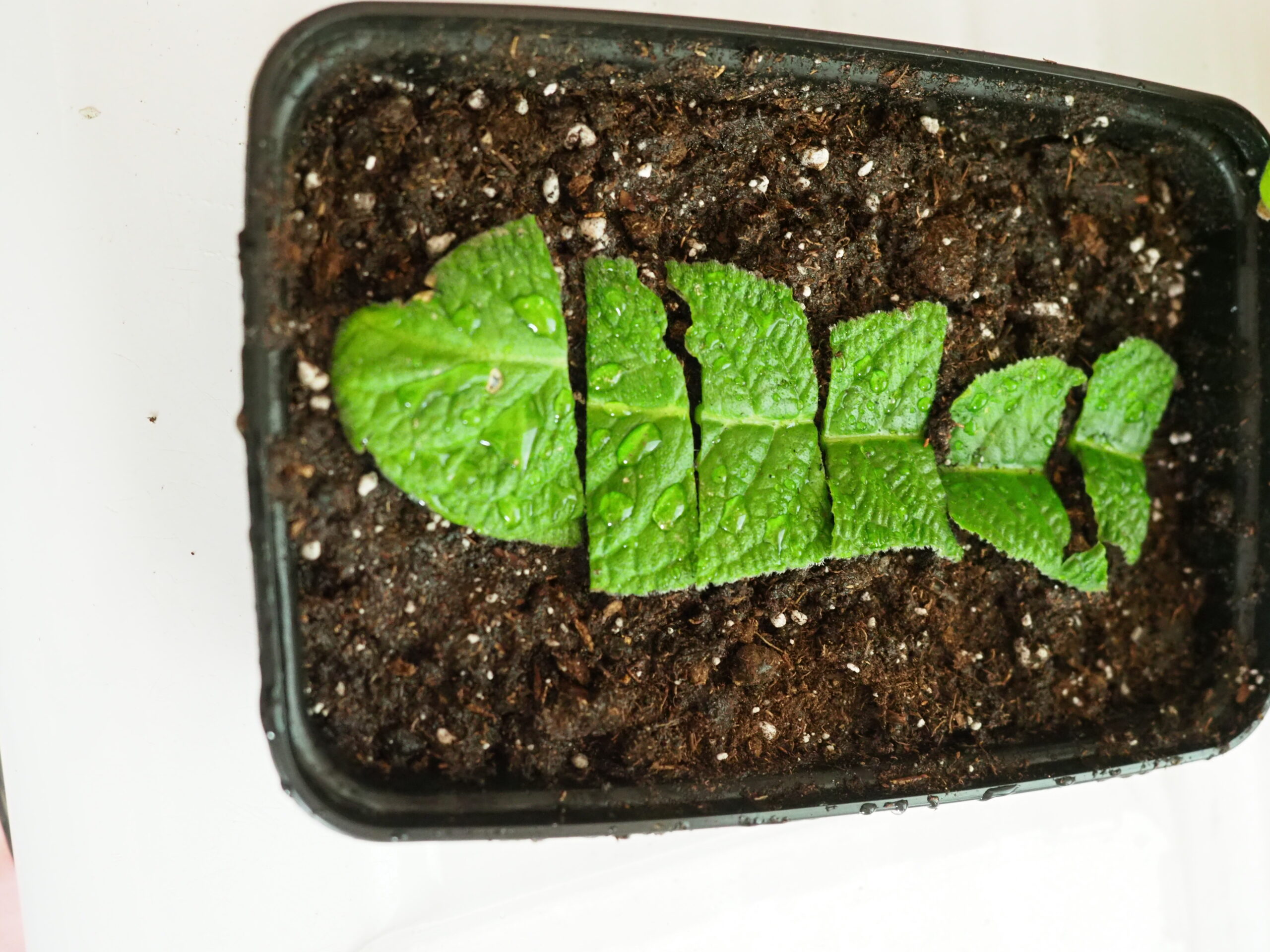 With the leaf cut into sections, each cut edge is lightly dusted in with a rooting hormone or rooting solution. The sections are gently pressed to the soil then misted and the cover put on the tray to retain humidity. These sections were cut in late May. ANDREW MESSINGER 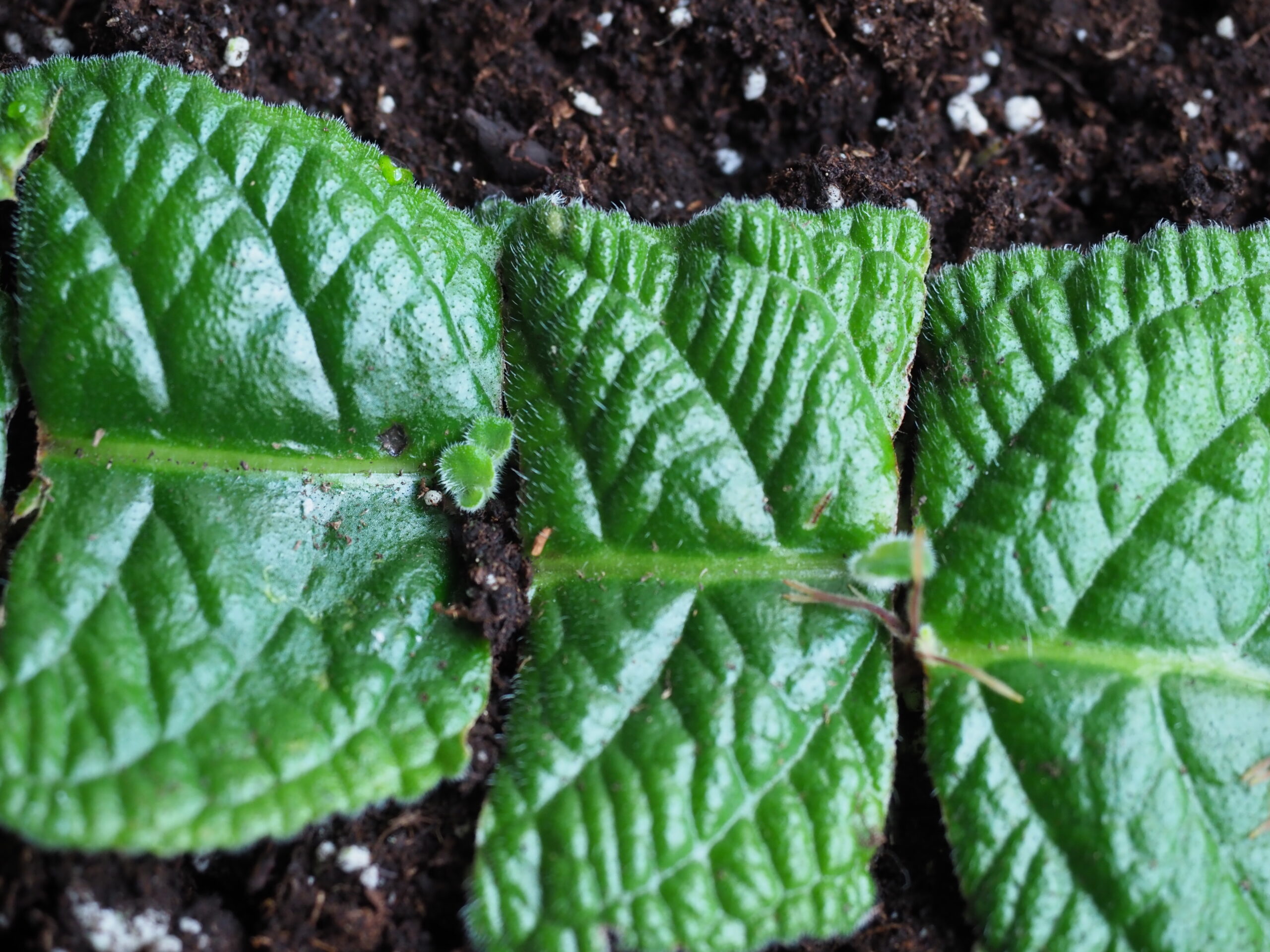 In mid-July, some six weeks later, new plants begin to emerge at the cut at the base of the midrib. ANDREW MESSINGER 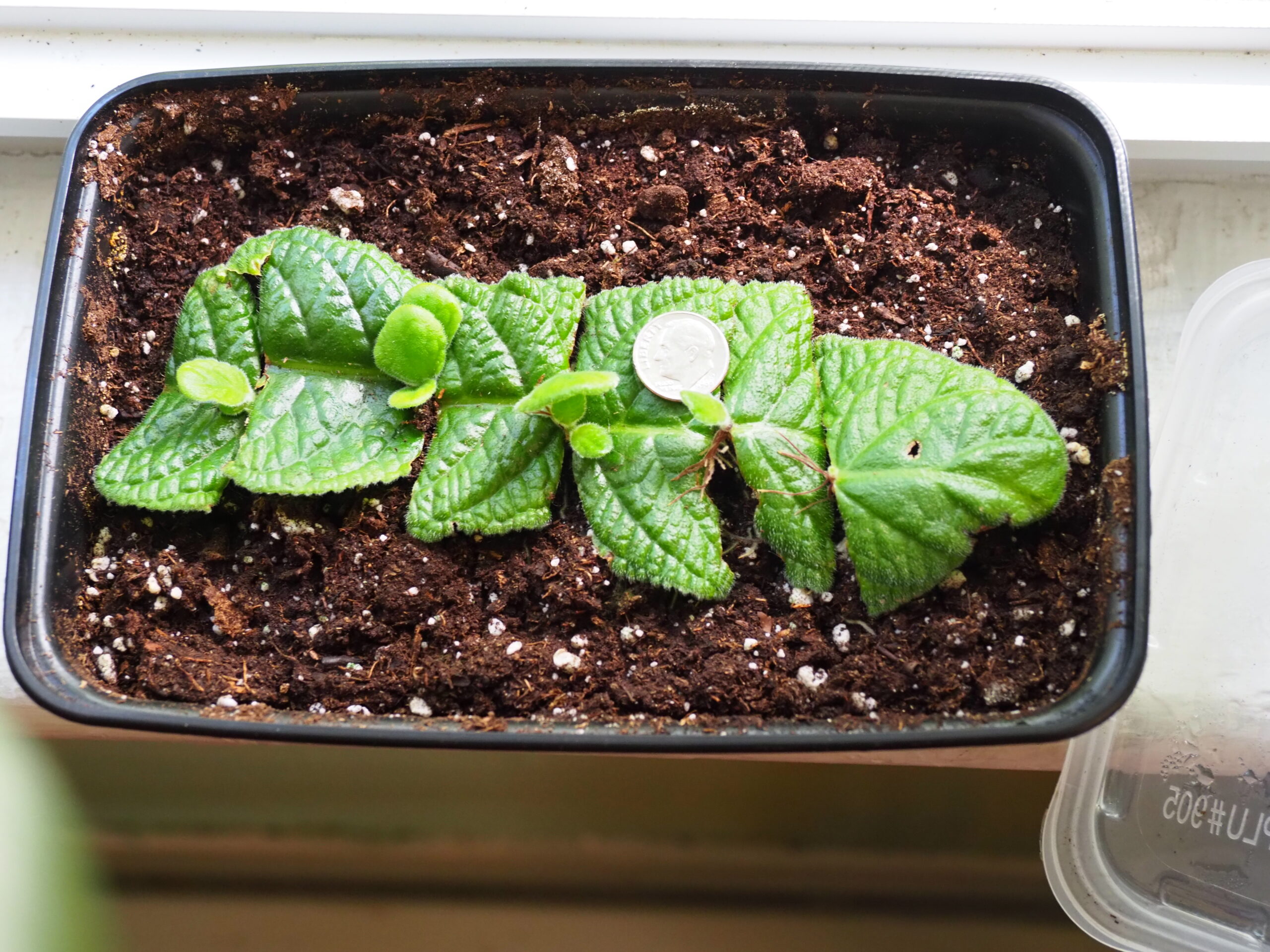 By early July, the new plants were dime sized and nearly ready to be cut from the parent leaf and potted. ANDREW MESSINGER 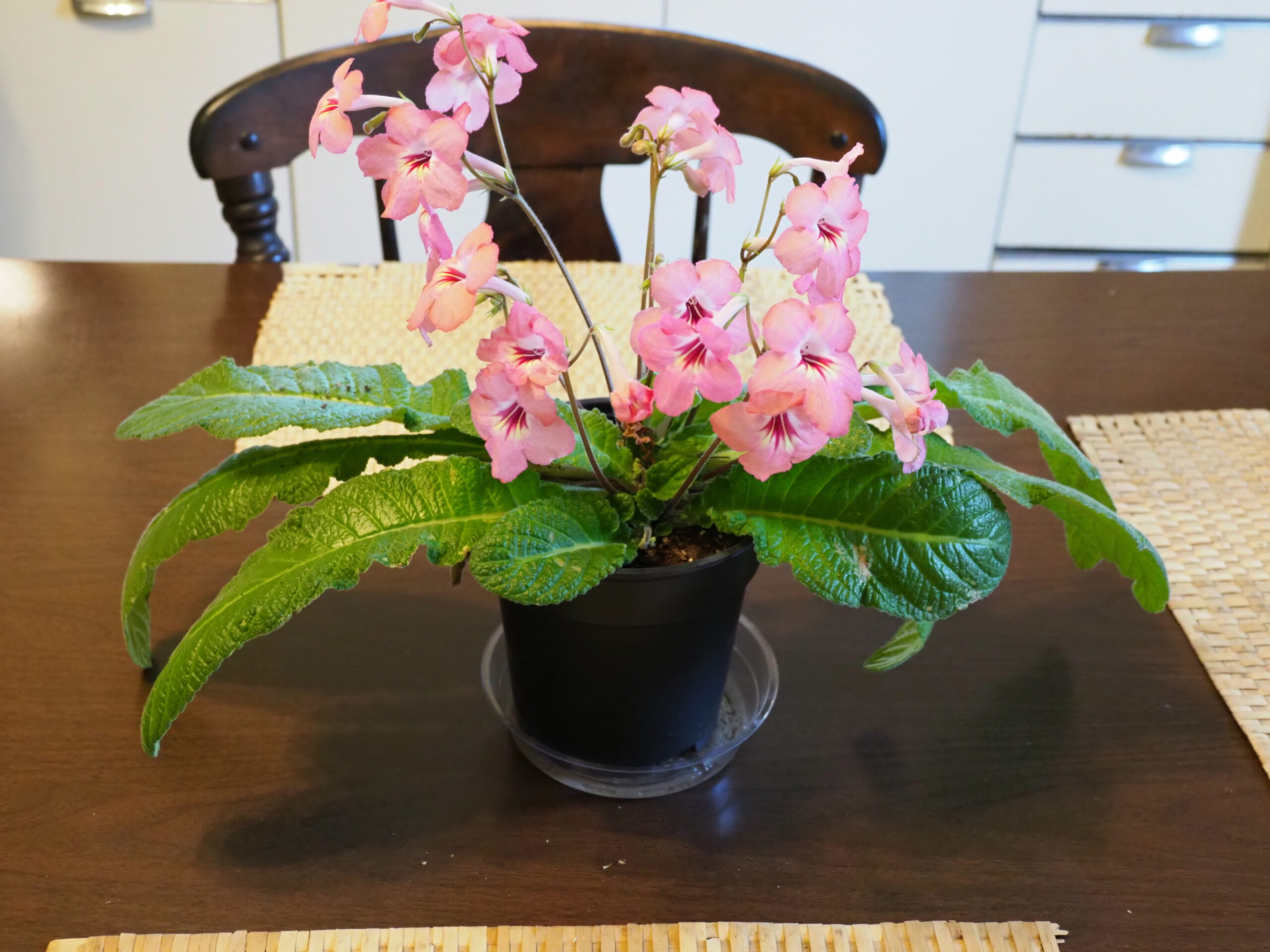 This is a Streptocarpus, or Cape primrose. They’re hard to find these days but make great houseplants. Flower colors are pink, red and blue with some bicolors and doubles available. ANDREW MESSINGER 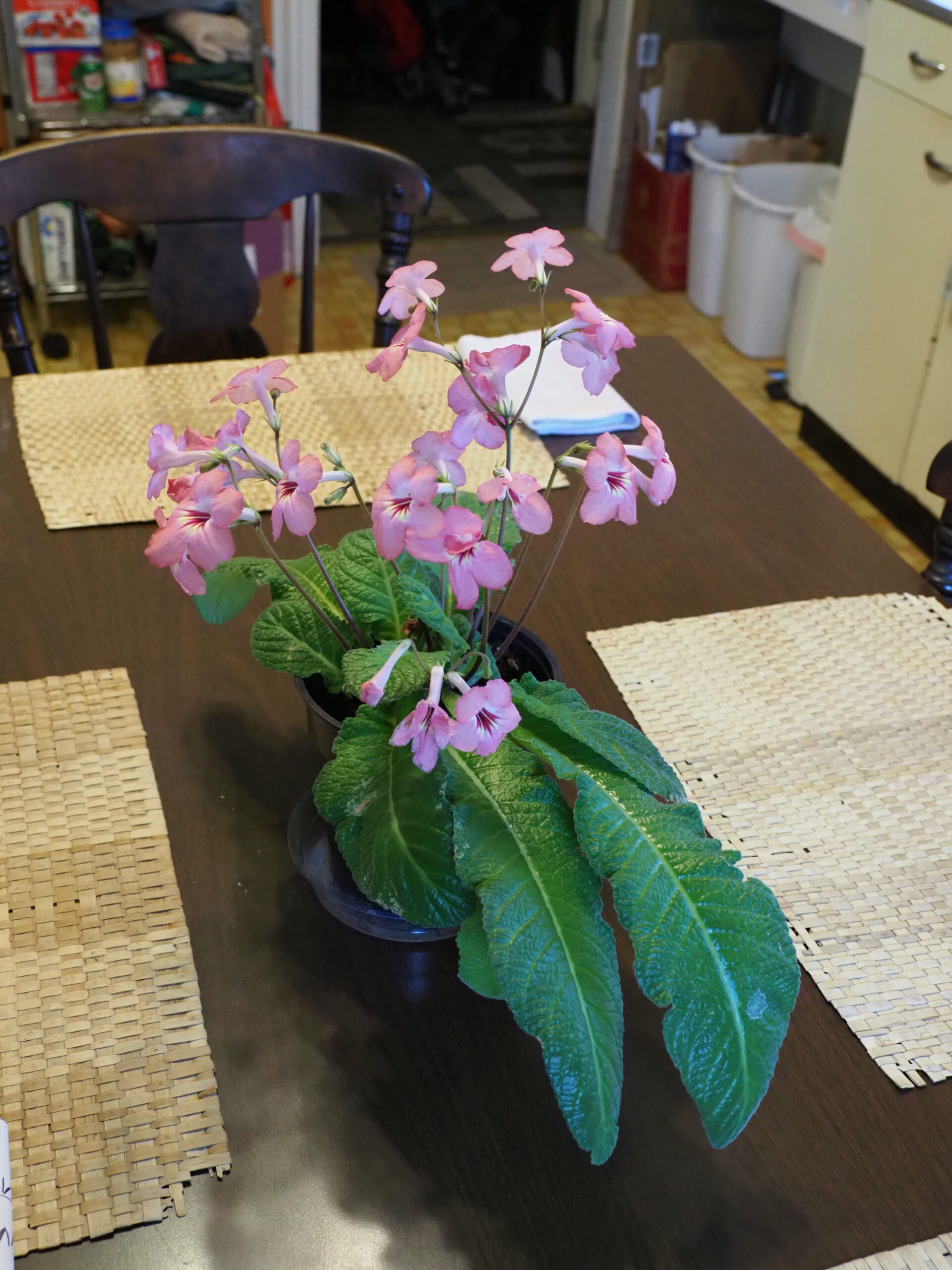 Notice the long midrib running from the base of the plant to the tip of the leaf. This midrib is critical in making new plants from this one. ANDREW MESSINGER

It was a cold, wet Sunday in March when my phone rang. It was neighbor Nancy.

“Andrew, the begonia that Yanko gave to me before he died is dead. Can you come and look at it?”

“Oh, Andrew, I’m just heartbroken, and you have to do something with this plant.”

This begonia had an interesting history. It was given to Nancy by a West Coast artist she’d known for years who had had lung cancer for a while. He was near death when he told Nancy she should take it and continue the legacy. It was just a nice and colorful Rex begonia, the kind you can buy in 6-inch pots at garden centers for use indoors or out. But it had a history of its own.

Nancy is a very emotional woman and doesn’t hold back. When I went into the kitchen she was in tears. It wasn’t so much that the plant had died but that Yanko wanted it to survive him as a living memory. It was 99.99 percent dead. It had languished in a pot much too large with soil that came out of someone’s garden. All that was left was a thin, shriveling stem that had stopped giving the last leaf sustenance. But there was a single leaf and I had an idea — and something you can easily learn.

Several plants, mostly tropical, can be propagated using portions of their leaves. There’s a little bit of hocus pocus involved, but this works on many Begonias, Streptocarpus (Cape primrose) and a modified technique can be used on many philodendrons and a large number of succulents like the jade plant. All you need is a leaf and, very critical, to remember which side of the leaf is top and bottom.

If you want to experiment, I think this is easiest on a begonia like the Rex. If you look at the leaf you’ll notice it has veins running from the point where the stem and leaf join and in many cases the leaf will have a mid-rib (very obvious in the Cape primrose) running from the base to the tip of the leaf. When sections of these leaves are property cut and the edges treated with a liquid or powdered form of a rooting hormone, roots are stimulated to grow along the cut followed by the somewhat miraculous development of a new plant.

In Nancy’s case all I had to work with was a single leaf, but I was able to cut that leaf into four sections. I treated each section edge where I’d made a cut with a powdered rooting hormone of 0.1 percent IBA (indol-3 butyric acid) using an artist’s (small) camel hair brush and dusting the exposed edges only with the hormone. Only use 0.1 percent IBA as the stronger types are used for woodier plants.

I had already moistened some peat-based, non-fertilizer potting soil and put it in a small take-out food container that has a translucent top. The same kind I’ve suggested you use for germination of small amounts of seeds. High humidity is critical in this type of propagation, thus the need for the container top, and the soil needs to be moist but not saturated as no water will be added for several weeks.

The hormone-treated leaf sections are then placed on the soil and then gently pressed to the soil without damaging the leaf. Leave a tag or note on the cover with the date you started. Before the cover or dome goes over the tray, the leaf sections need to be gently misted. You can use a spray bottle but the keyword is “gently.” The leaf or leaf sections should have a slight film of moisture on them but not be saturated.

Now, just wait. The covered tray should be in an area where there is no AC blowing on it and where it’s light — but the sun should never hit the tray or it will cook. Nancy’s tray stayed in her kitchen where she gets early morning sun but the sun never hit the tray. A soil temperature of 70 to 75 degrees is perfect if you can work that out. We didn’t.

Nancy’s tears of sorrow now turned to tears of rejoice, but I cautioned her: “This might work, but it may have been too late. Let’s see.”

Weeks went by, and I got no answer to my text questions, “How’s the begonia?” Then late in May I called and asked if I could come over and take a look. To my delight there was no mold or fungus, and three of the four leaf sections looked fine. Actually, one of them had a small new begonia growing from the cut area of the leaf. Nancy insisted that it wasn’t there two days earlier when she checked, but this was really a few weeks of new growth. It didn’t matter though; we had succeeded. Nancy was again in tears, but this time they were tears of joy.

We just potted up the new begonia, and Yanko’s legacy plant is now renewed. The plant is no more than an inch in diameter and will have to be tended to carefully for several weeks, but by the end of the summer it should again be a great and colorful houseplant — with memories.

Leaf cuttings and several variations can work on a number of houseplants. These include African violets, Gloxinias, Streptocarpus, Peperomias and many of the succulents, including the Sansevierias and jade plants. Each plant may have its own idiosyncrasies, but most are very simple and in some cases, like the jade plant, all you need is a leaf and some moist sand, but not from the beach. If you start now, you should have a respectable-size potted plant by early next fall.

One plant to experiment with is the Streptocarpus. One leaf, about 2 inches wide and 6 inches long, can yield a dozen or so new plantlets, each of which is an identical clone of the parent and will bloom in about nine months from the new plant emerging. The new plants show up on the margins of the cut leaf, and when about a half inch wide they can be severed and potted into a 4-inch clay pot or smaller.

And while you’re at it, read up on cane plants like your Dracaenas and Dieffenbachias. This is the prime time for propagating these as well. A cane from a tall and leggy Dieffenbachia can be split along its length. The exposed cane is treated with 0.1 percent IBA then laid horizontally (split facing down) on damp sand or potting soil. If the soil is kept warm the cane will root and every dormant bud along the cane will develop into a new plant. When the young plant is large enough to handle, simply cut that section of the cane and pot up the new plant in a small pot.

For the Dracaenas, just take a piece of cane about 6 to 10 inches long, treat the cane ends with IBA and lay the cane horizontally on damp sand or potting soil. Keep it in bright light with the soil moist but not dripping wet and during the summer dormant buds along the cane can emerge as new plants. Cut the new plants and pot them up just like the Dieffenbachia.

It can take some practice, but as you master the techniques you’ll get a great deal of satisfaction in the new plants you can create. And it’s very, very inexpensive. Give it a try and let me know how you make out. Keep growing.

There are two mistakes that both neophyte and experienced gardeners make when planning and executing ... 14 Apr 2022 by Andrew Messinger
×