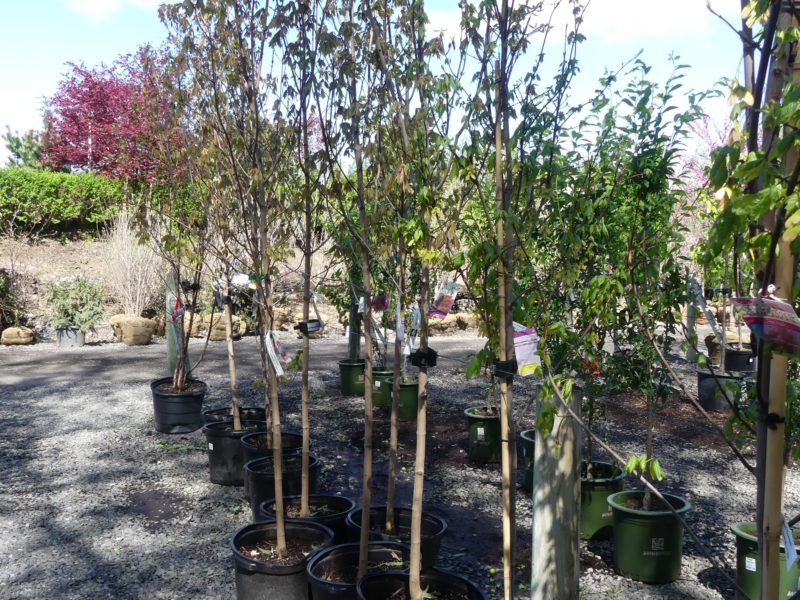 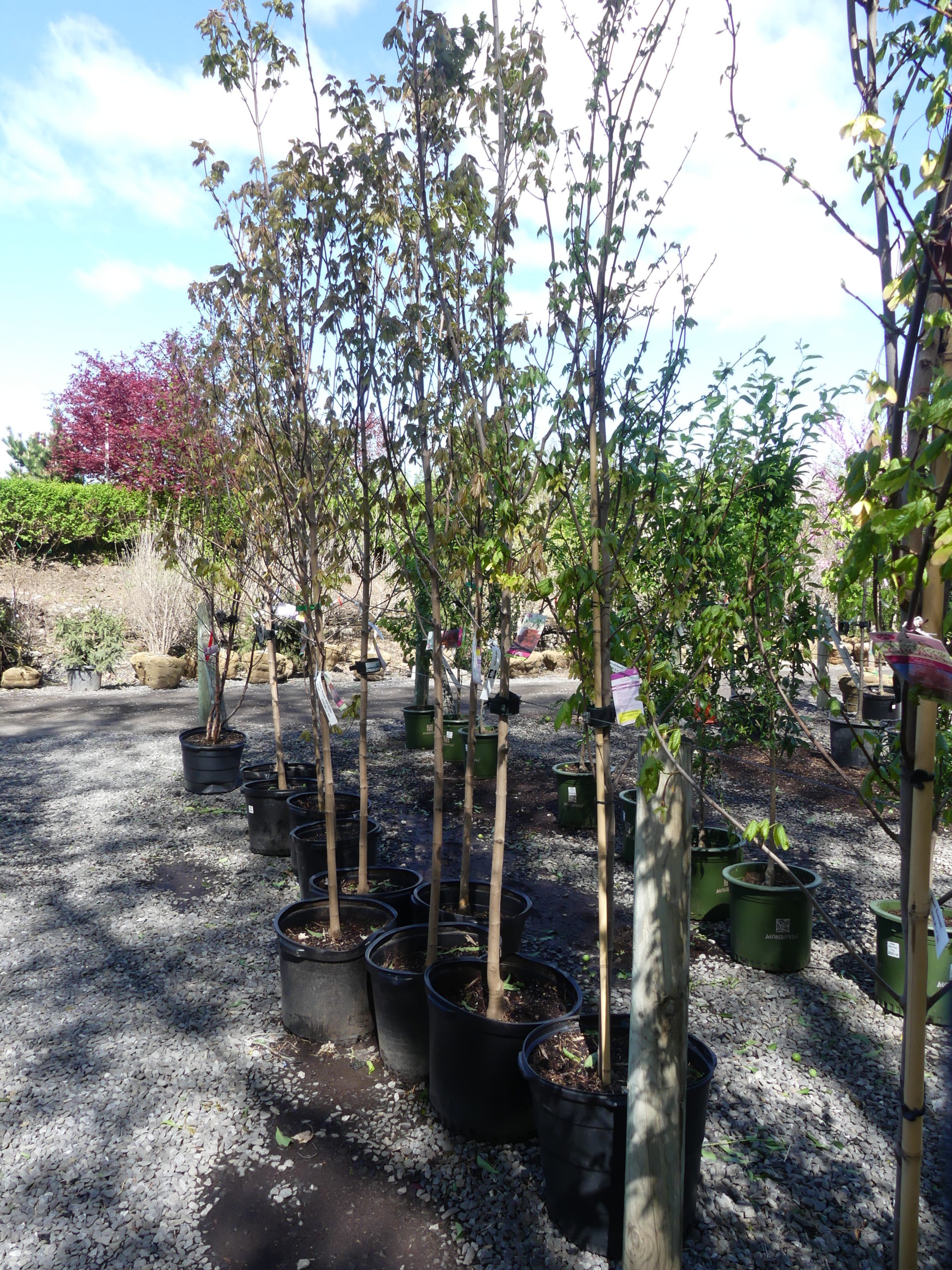 These container-grown maples are not expensive but their form and pruning leaves much to be desired. Container-grown trees and shrubs need special care when planting or the roots will continue to grow in circles, often resulting in years of decline before failure. 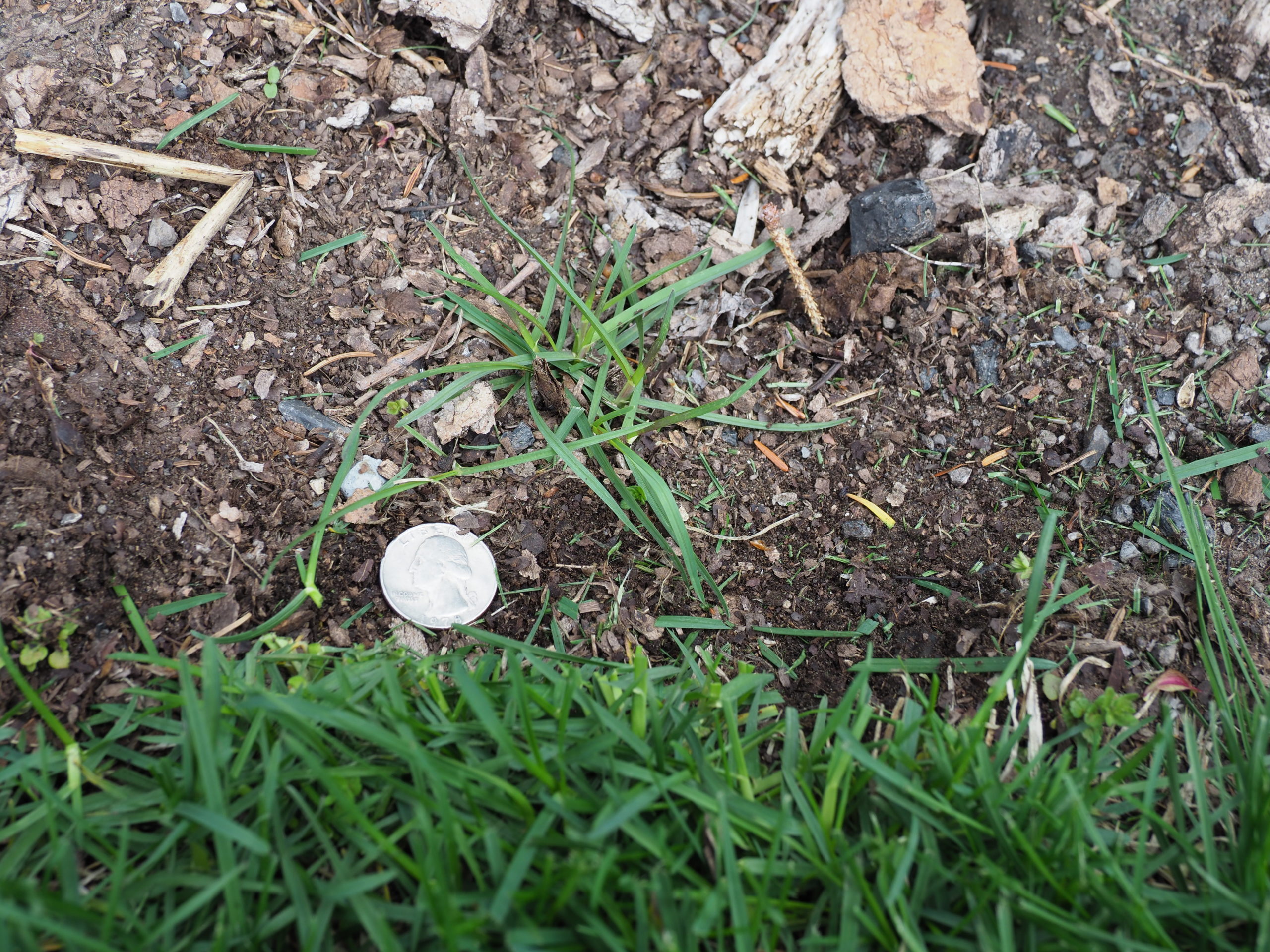 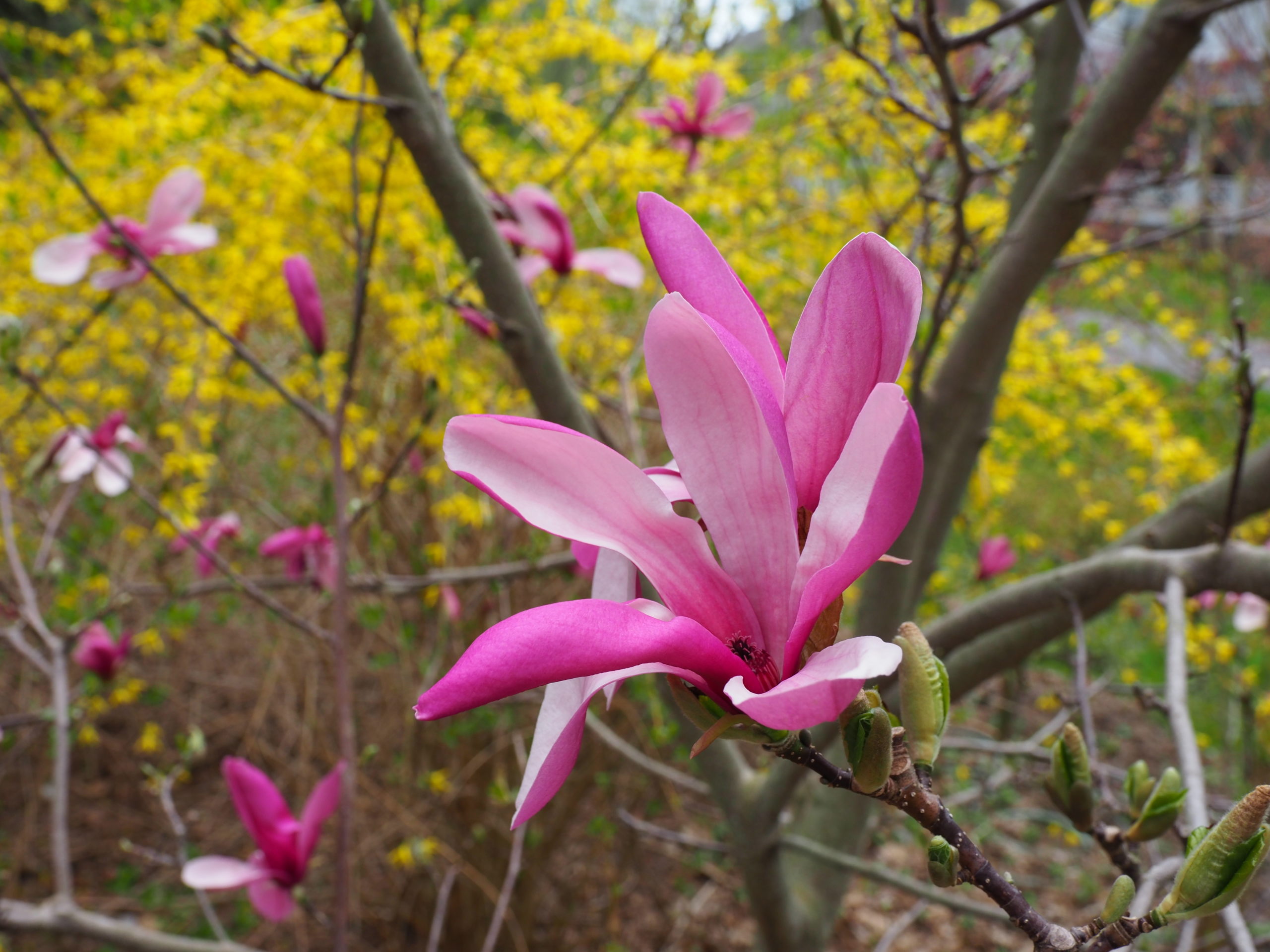 With no late frost or freeze it was a wonderful spring for Magnolias. This variety is Purple Star Power, which can bloom from late April and still have flowers opening in early June some years. ANDREW MESSINGER 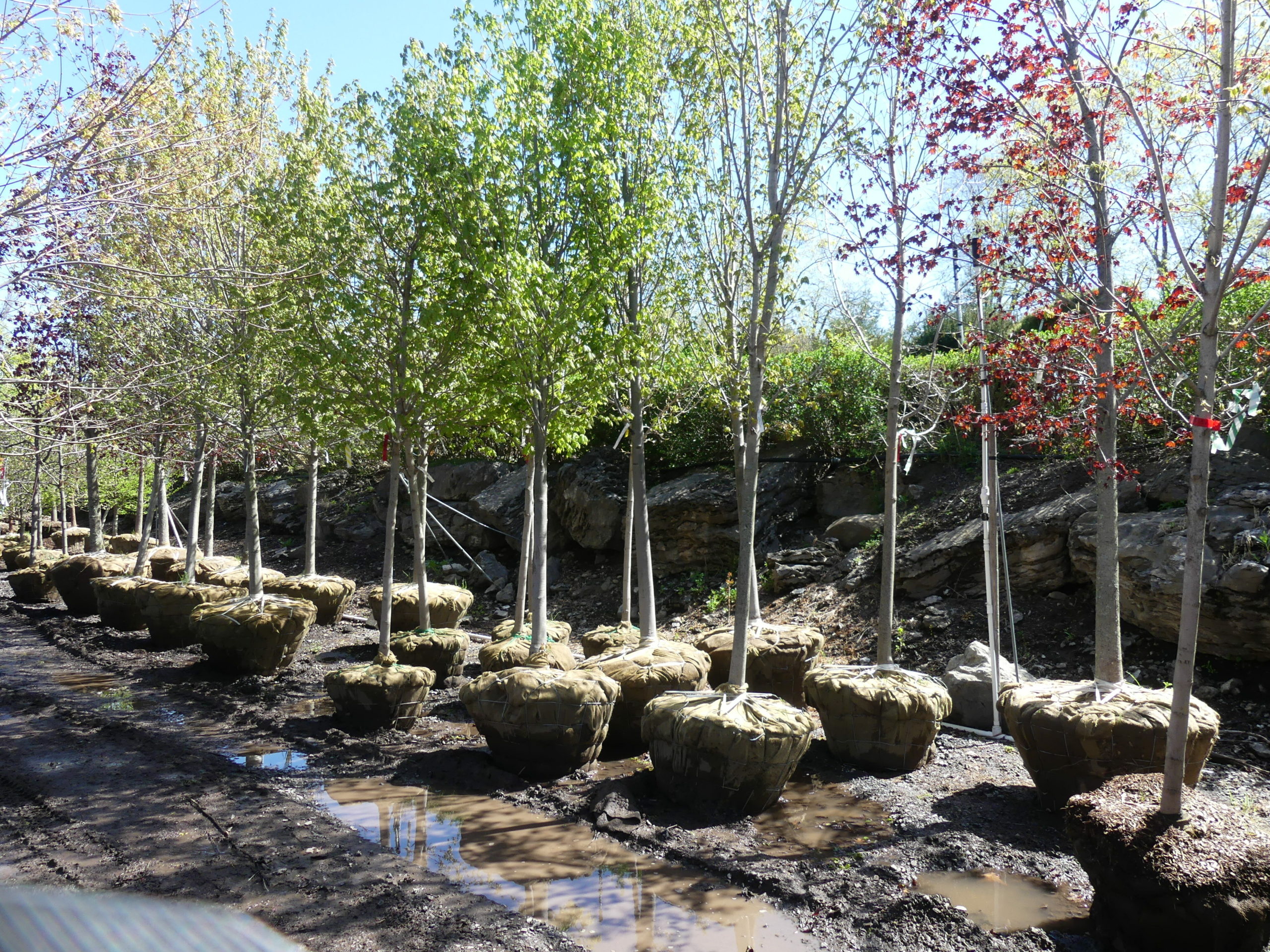 These balled-and-burlapped maples are much more expensive than potted ones, but when planted and watered properly their survival rate can be excellent. Remember, no fertilizer the first year after planting. ANDREW MESSINGER 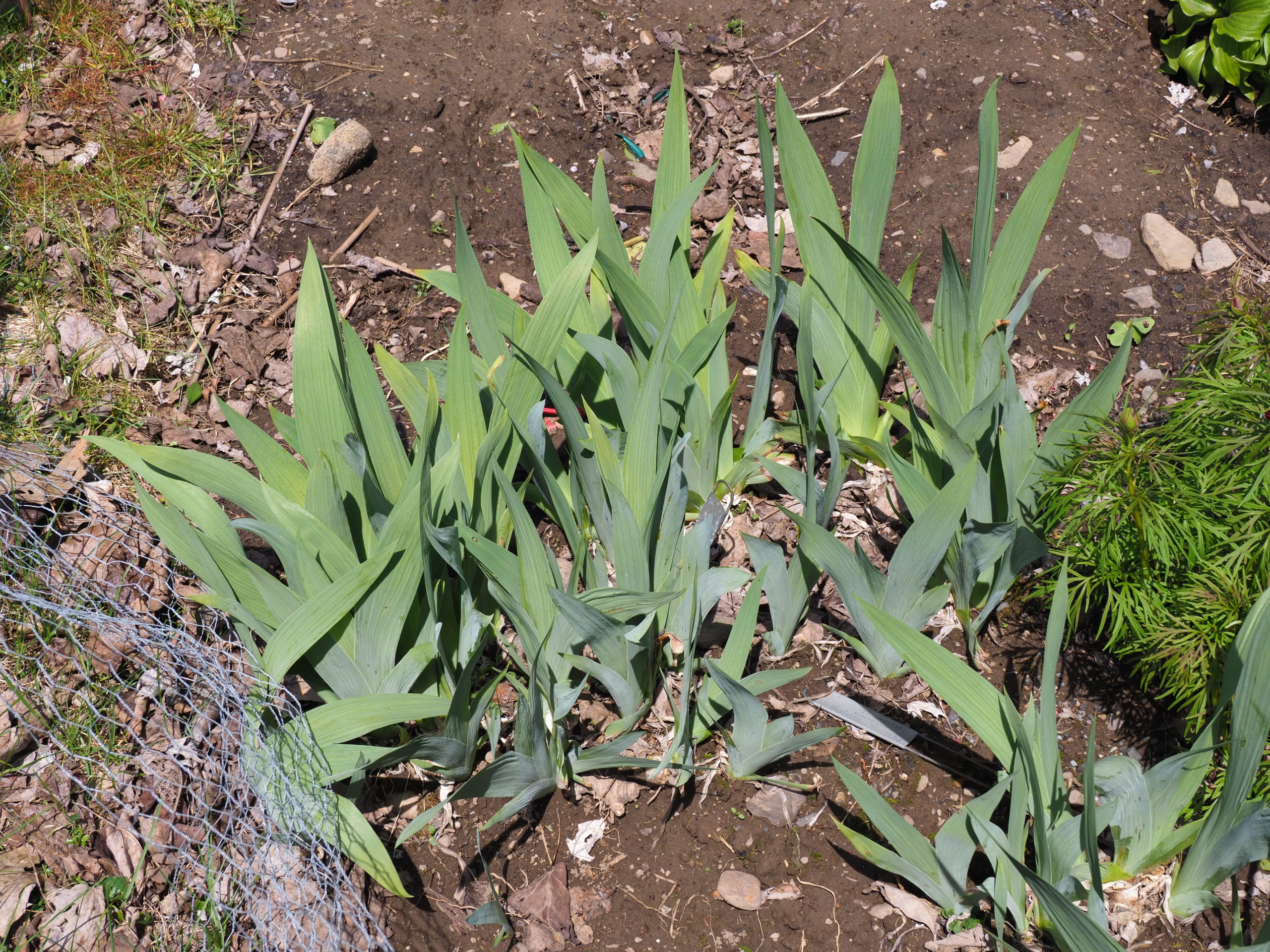 This iris mass is only 6 years old but it hasn’t flowered in two years. This is a good sign that it needs division and thinning so it will flower again. The time for this work is in late summer. The time to make the notes is now. ANDREW MESSINGER 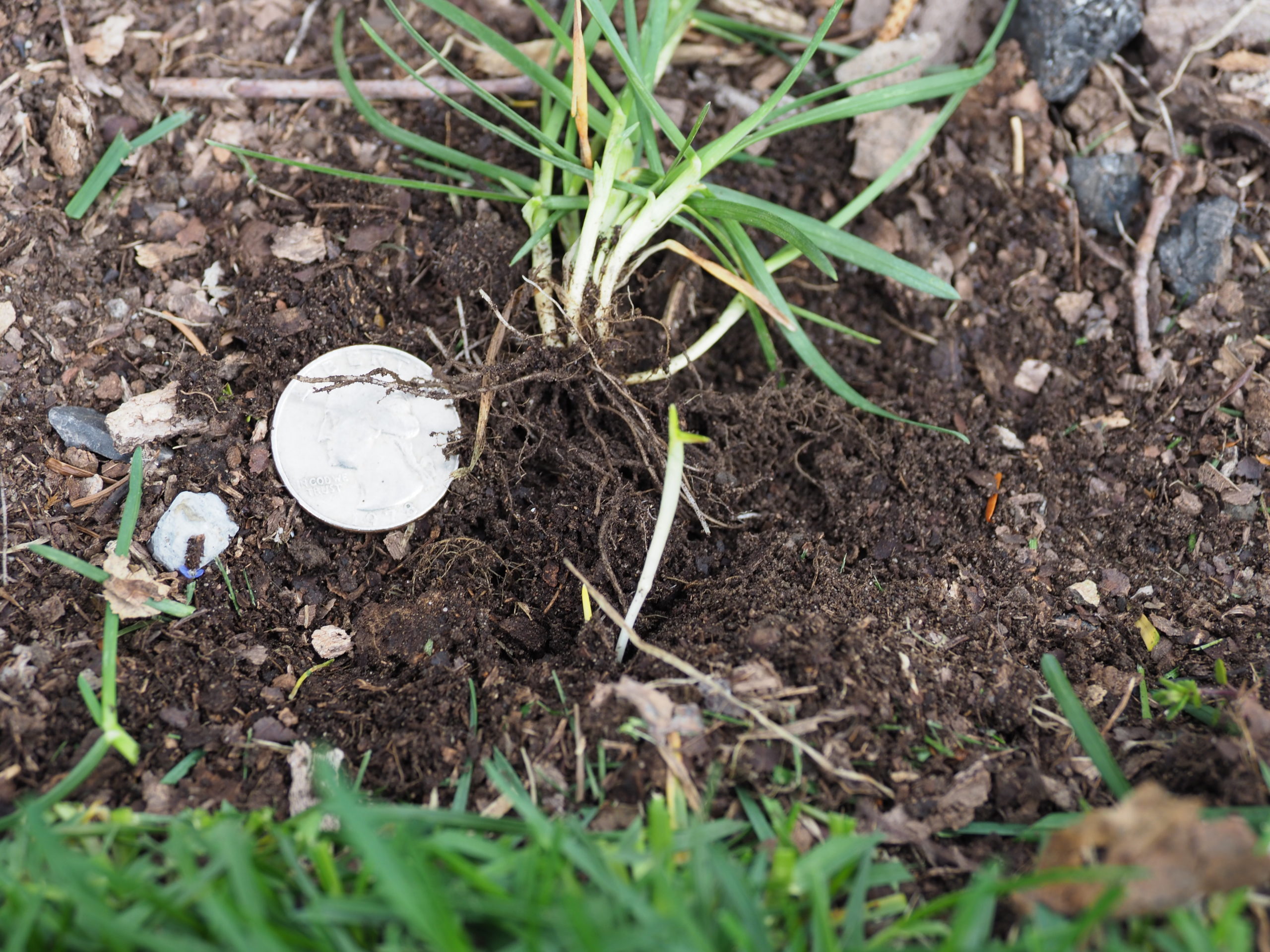 When the grass “sprig” above the quarter is pulled up it reveals not just its root system by the white-colored rhizome (about an inch to the right of the quarter) that ventured from the lawn into the landscape bed starting a new plant. Edging and pulling can simply remove these volunteers. ANDREW MESSINGER

If you’ve been paying attention to the news you may have seen some reports about the reappearance of the periodic cicada. More specifically, Brood X. Don’t panic.

In all probability you won’t see or hear any Brood X cicadas out here this spring, and if you do they will be few and far between. These large insects are emerging in some East Coast areas, rising from the ground where they’ve been feeding for the past 17 years, mostly on tree roots. When the soil temperature reaches 64 degrees they emerge from the ground and develop quickly into winged insects who then fly to treetops looking for mates. They are loud, scary to some, but harmless.

And speaking of soil temperatures, which are very important to veggie gardeners at this time of the year, you can get a pretty good idea of our local soil temps by using this link, greencastonline.com/tools/soil-temperature, and just inserting your zip code. Not as good as the soil thermometer I think you should have, but a close second. You’ll see that we’ll hit that magic 64 degrees very soon.

Most important, though, is that Brood X is nearly extinct on Long Island. A Cornell entomologist explained to me recently that due to the urbanization of Long Island and the fragmentation of our outdoor environment, Brood X has found Long Island to be an inhospitable place to call home. Some kids may be upset to hear this if they’ve been hearing about these cicadas, but they probably won’t be seeing them this spring.

Don’t confuse Brood X cicadas with our annual cicadas. The annuals emerge late every summer as they too seek the height of tall trees where they sing their songs attempting to attract mates. But unlike the Brood X’ers, our annual cicadas do have a natural enemy called the cicada wasp. This large wasp seeks out the summer cicada, stings it into submission then carries it away to its underground nest where it feeds the cicada to its young.

A reader sent an email recently about an invasive weed that has taken over a neighbor’s property and is now expanding into their yard. The weed, called the lesser celandine, looks like a harmless buttercup, but it’s far from harmless and can take over a landscape in no time. The worst part is that only one herbicide, glyphosate, is known to give good control. Many gardeners have issues with this herbicide, and you need to remember that it doesn’t just kill the weed but everything it comes into contact with. You can read more about this plant and see a picture here: nyis.info/invasive_species/lesser-celandine.

At least twice a week my email has a message from Pearl’s Premium. This is an alleged miracle grass seed that the promoter claims will solve most of your lawn problems. Little if any need to mow, never need to fertilize, drought tolerant, disease resistant and on and on. I’ve tried to engage the promoter and asked for a copy of the seed label so I could see just what’s in the mix. Never had the courtesy of a reply. Now why would that be? My advice at this point is to avoid Pearl’s Premium until the “inventor” can supply scientific research showing that the claims about this “breakthrough grass” can and have been verified. Otherwise, it may just be snake oil of the seeded variety.

In visiting garden centers and speaking with gardeners a few have offered revealing feedback about their shopping experiences this spring. There are still shortages of certain perennials, trees and shrubs. Making things worse is the quality of some of the plant material that’s available. Remember that the tree and shrub part of the business is still suffering from the financial crisis of 2008. Yes, it takes years to grow trees and shrubs. I’ve also noticed that many of the trees I was looking at looked to have been pruned on the run by nursery workers who simply followed instructions without paying attention to form and function. The result is plant material that is improperly pruned or shaped. Understandable, but unfortunate. I did not see this issue in the higher-end nurseries and garden centers, though.

In searching for the perfect sugar maples for my yard I had to choose between container-grown trees and those field dug (balled and burlapped, or B&B). I’ve just seen so many issues with container-grown trees and shrubs that I will rarely, if ever, buy them. They spend years in pots, and you can see what this does when you de-pot them prior to planting: dangerously girdled roots and roots that fill pots in endless circles.

Most gardeners will have problems teasing out these roots and doing a proper planting. I think there’s also a good deal of transplant shock when planting potted trees and shrubs, so buyer beware.

On the other hand, if a B&B tree or shrub is bought there is little to no transplant shock. While it may take a year or more for the plant to “take off,” I always seem to have much better success with bare-root or B&B plant material than its potted relative. A B&B tree or shrub will cost substantially more. But when your container maple dies in a year, it has little value.

In either case, there are two things to remember when planting new trees and shrubs. No fertilizer for at least a year. Keep the plant well-watered. It has a reduced root system and for at least a year you will probably have to supplement rainfall so the plant gets a deep soaking at least once a week.

Last summer I had a gazillion chipmunks and their attendant damage. So far this year, not one on my property and only a few next door. This seems to be more than a local phenomena as I’ve gotten similar reports from Connecticut, New Hampshire and upstate New York. Have you noticed the same thing? Even my vole population seems to have collapsed but the squirrels, they seem to be just fine.

If you’ve grown any of the tall garden lilies or if you have a collection of these plants, you are probably aware of the extremely destructive lily leaf beetle. Well, there’s good news. A parasite that feeds on the beetle’s larvae has been released in several areas in New England and reports of dramatic reductions in the beetle population are very encouraging. You can learn more about the University of Rhode Island project as well as see pictures of the beetle and its distribution using this link: bit.ly/2QMRJno.

As your peony and iris plants flower during May and into June take a close look at the plants and beds. If they’ve been in place for more than four or five years it may be time to renovate those plantings. Now is the time for looking and taking pictures and notes. The actual work is done late in the summer. Look for plantings that produce little to no flowers as this can be the sign that renovation is needed or that your plants are planted too deep. Even where Iris and peonies were planted properly, if these areas are often dug or mulched the critical parts of the plant that need to be near the soil surface can get slowly buried. This will inhibit or stop flowering as well, and this too calls for renovation in late summer.

I’m not shy about my love of Kentucky bluegrass, but it doesn’t do well everywhere, has heavy fertilizer and water needs and can be a wee bit invasive. This grass, unlike ryegrasses and fescues, has rhizomes that reach out horizontally in an attempt to expand its coverage. It’s this quality that makes this grass desirable as it tends to “self-fill” bare spots.

On the downside, these rhizomes travel underground into garden beds and only a meticulously edged garden will escape the rhizomes. I simply pull the rhizomes out when I notice them and only edge my beds once or twice a year, and that seems to work.

Looks like we’re in for an “average” summer when it comes to sun and rain. It will be slightly cooler than last summer and a bit wetter. Maybe. But that’s the official long-range forecast for the area. Don’t let your guard down, though. Make sure you have the sprinklers you need as well as the hoses. Last summer they were hard to find in August.

It’s my favorite time in the garden. Things are filling in, new plants are arriving for the next few weeks, and at the end of a nice day of planting, weeding and taking care of everything I’m just exhausted. And I love it. Keep growing.

The Time Is Here To Repot Pot-Bound Houseplants

This is the perfect time to repot houseplants if they are showing signs of being ... 17 May 2021 by Andrew Messinger