May Musings From The Garden - 27 East 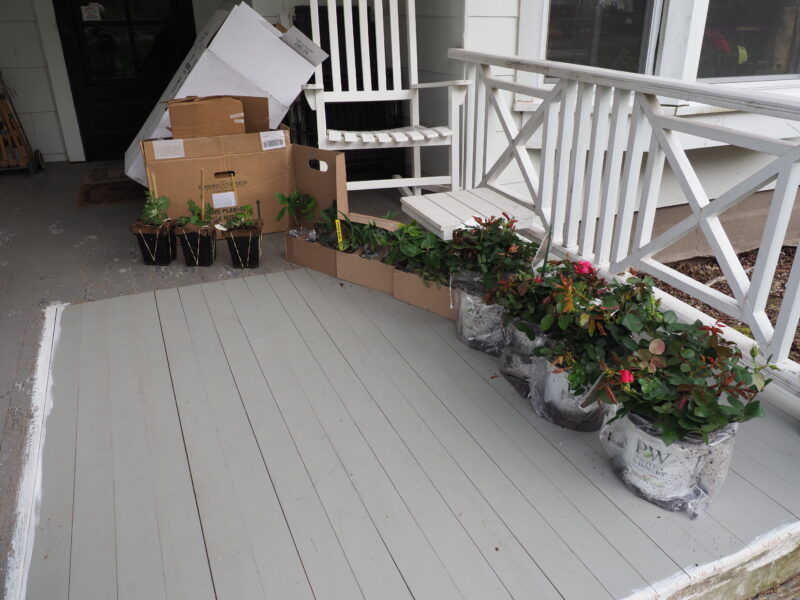 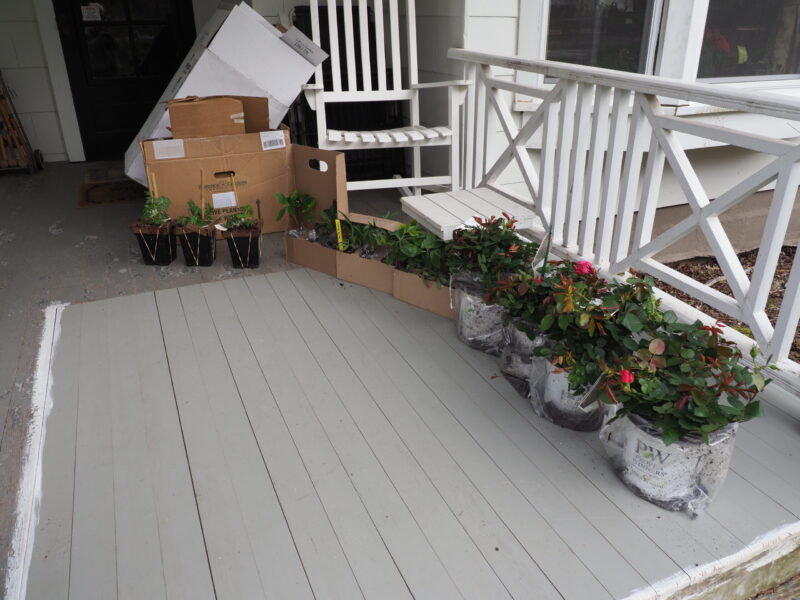 Twenty-four plants in all and still not fully unpacked. Some will stay in post for weeks while they fill out but the roses are ready to plant. Unfortunately, the site planned for the roses proved unusable and a new location is being contemplated. The roses are Oso Easy Double Red that I trialed for several years and love. The trial plants were free. I had to pay for these. ANDREW MESSINGER 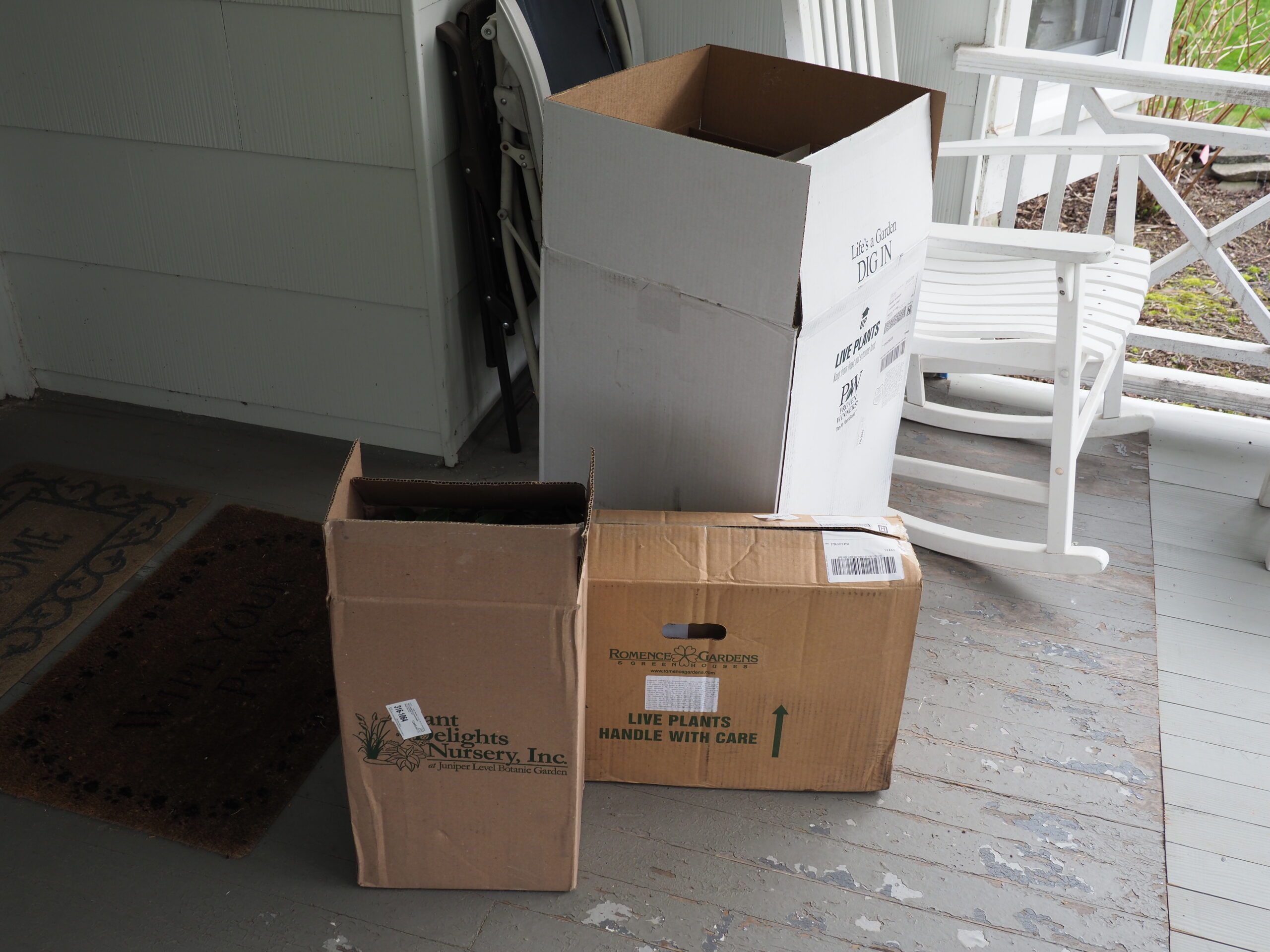 This is how it starts. Hellebores from Plant Delights, Trollius from Romence Gardens and roses from Proven Winners. Seven more plants arrived from Avant Gardens later in the day. Plants arriving like this should be unboxed immediately and examined but not put in full sun. Check for water. ANDREW MESSINGER 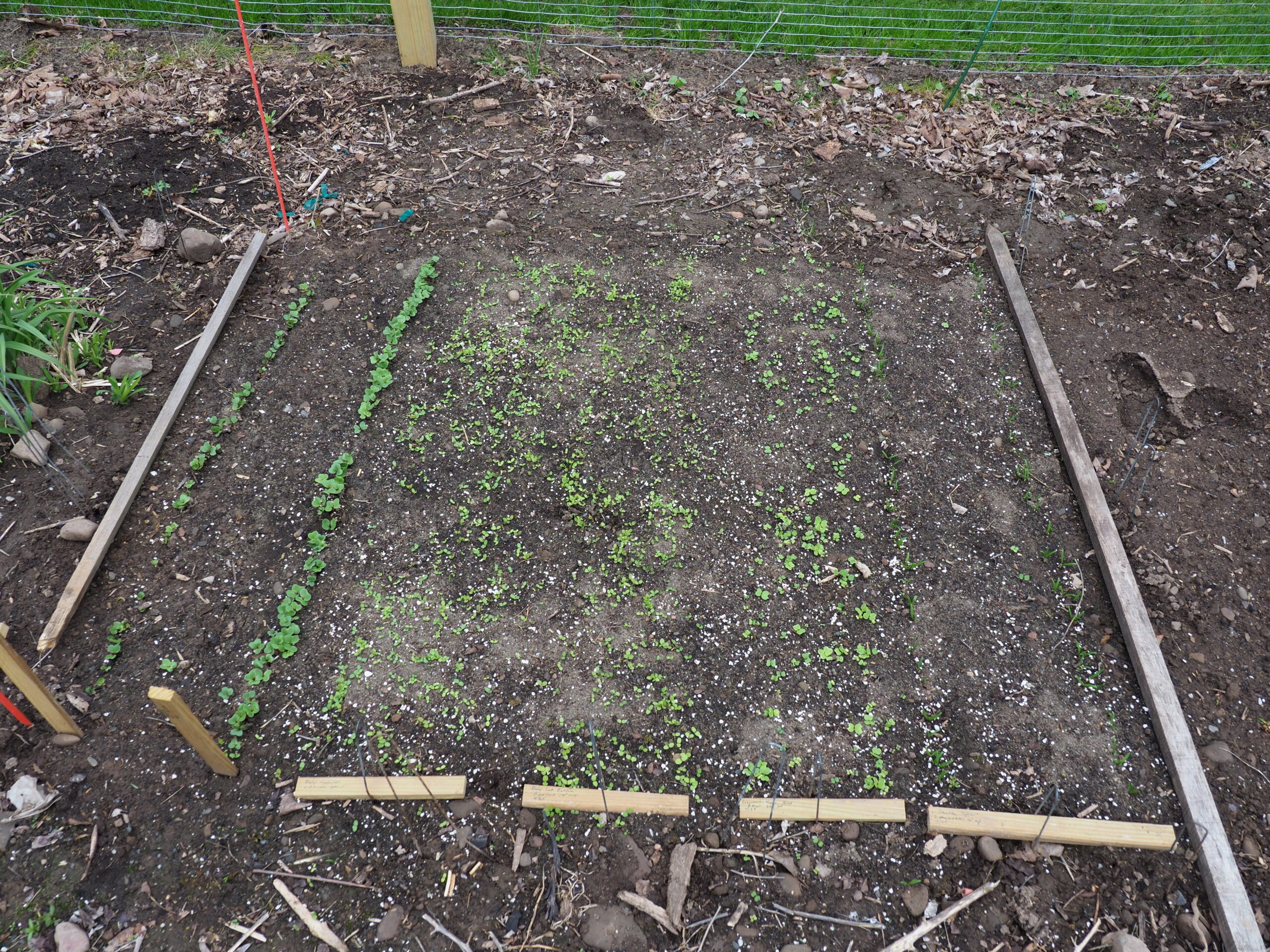 The Hampton Gardener’s humble veggie patch. Two types of radish (left), three cutting types of lettuces (center) and two rows of cutting spinach (right). As this block grows in a second, similar block was just seeded and a third will follow with some variation. Seeding resumes again in mid-August, and the three plots will continue to produce through late October. Wooden labels indicate variety, sowing date and harvest dates. The thinned radish seedlings went right into a very tasty, but zingy, salad. ANDREW MESSINGER

These are the rush days for gardeners. A bit of warmth (finally) and a bit of rain keeps us busy beyond belief, but it’s our efforts in May and June that pay off for the rest of the season. Though many of us could garden in the dirt behind our fingernails and our backs may be stiff and achy, this indeed is a grand time for getting down and dirty.

UPS and FedEx are dropping off plants on the front porch several times a week, and I expect my last big delivery this week. It’s such a shame that so much time, effort and material has to go into shipping these plants, but still, it’s how collections are achieved. You can start by shopping local, but in the end the more interesting, exotic and unusual plants will come from mail-order nurseries. I was very impressed with a shrub (a pink pussy willow) and several perennials I received from Avant Gardens in Washington. They shipped early in the week, the plants arrived in great shape and with three-day select shipping (UPS) the plants were in great shape and very reasonably shaped. In one week, plants arrived from Michigan, Washington and North Carolina.

I rarely use the planting instructions that come with mail-order plants, but for some reason I read one planting instruction booklet from cover to cover. I was very surprised by one “Plant Care Guide” where the section on feeding says “If your plant soil is managed well and the microbes are happy, the plants will have the nutrients they need available when they need them.” Have you spoke to your soil microbes lately? I don’t think this nursery has much experience with growing in sandy or clay soils.

The other issue is that so many of the modern introductions and hybrids — especially in perennials but also with many annuals — are very heavy feeders. I can’t imagine going through a season without feeding my roses, delphiniums and a host of other garden plants. Yes, we’ve learned that soil microbial activity is critical to success, and some fertilizers now come enhanced with microbes such as mycorrhizal fungi, but in sandy soils we not only have to amend the soil but we also need to add nutrients. These should be organic nutrients that are much less likely to leach out of the soil than the salt/chemical-based chemicals.

We live in communities and during a time when instant gratification is rampant. Don’t like the house you just bought for $11 million? Then simply take it down and build the house of your dreams. Don’t like the landscape the previous owner left behind? Just dig it out and plant the place with trees, shrubs and gardens that bloom and have that “been here forever” look in just weeks.

But if the owner is into his or her plants and wants to begin a collection of plants, special ones, then interesting things happen. These properties aren’t redone in weeks or months. More like years and decades. Some of these properties were and are established by other moguls of Wall Street. The difference? They have a passion for plants, and in some cases, one particular plant. From begonias to conifers to beeches and endless perennial island beds, we’ve got them out here.

Occasionally though, there are unexpected turns and twists because when you develop a collection it’s often the case that your plants are purchased small and will need years to fill out, flower and or fruit. These small rarities may in time become giant specimens — until the next hurricane; they always forget about hurricanes — but they need to mature. Something we often don’t consider in our plant purchases.

I remember my father planting his small orchard of fruit trees as each specimen arrived bare rooted and only 4 or 5 feet tall. Soak them in a pail of water, plant them, then wait and wait then wait some more. Maybe five to seven years later he’d get his first fruit. Not like the radish that you plant and it’s ready, sorry, mature, 30-ish days later. So you can get nearly instant gratification from a radish, but not an apple, not a pine and not many other plants.

I unwittingly had the same experience. I decided to start a magnolia collection with a new variety each spring. This started a dozen years ago. I lost one, replaced it the next year then went on to do three more. These were 5-foot-tall, nursery-grown trees from a grower in Wisconsin.

I waited seven years for one of them to flower. And, it was just one flower but a very beautiful one indeed. The next year it pushed out seven flowers, and this year it’s got close to 30 flowers. It won’t really mature for another two years — more than 10 years since I planted it. I thought it was me though, and I was a failure at growing trees.

An evening of research and I found the same tree at a botanical garden in the Midwest and there was a note in the garden’s history of this magnolia that it “can take seven to ten years for this variety to fully flower.” No instant gratification here, and no 20-foot-tall specimens of this variety available.

There’s also my recent realization that as I get older I have to be careful what I plant as well as where I plant. Oh, and how many of a variety I plant. I’m past the point in years when I can plant a 15-foot maple or spruce and expect to see it in stately maturity.

The other thing that aging has me thinking about (OK, there are many, many things) is how I plant and why I plant. My records show that I’ve planted over 900 varieties (mostly perennials) on my property. Usually it’s three of a variety, and when it’s outstanding, maybe more. My life-altering question at this point is, should I continue to plant more varieties in the same manner or is it time to simply plant more of what I know has worked and enjoy the show? Oh, the decisions.

I did a road trip to Massachusetts last week to visit a botanical garden in the Berkshires, but I also made sure to stop at Ward’s garden center in Great Barrington. It’s always interesting to see garden centers in other areas. I was delighted to see five varieties of Trollius and many selections of Epimediums, but what struck me was that this highly regarded garden center was selling well-grown plants in pots smaller than gallons. Similar plants found out here were priced as much as 40 percent more. Value does not always come in larger pots at higher prices. Instant gratification has a cost though.

Some garden centers are reporting that they’ve been backordered on garden hoses. So, while you may see them on the shelves, don’t expect to find the right hose come late July or August. If you need a hose or hoses, now would be the time to pick them up. The last time I reviewed hoses was in 2017, and after plenty of research I found that the Gilmour and Flexogen brands performed best and lasted longest. Both these brands have different quality levels so buy the best quality you can get or afford. You may be able to find my original reviews in the April 20 column of 2017. Buy a cheap hose, and I guarantee you’ll regret it.

Continue succession seeding in the vegetable garden. Succession planting also means having something ready to go into the spot where the radishes will be done. Over mulching in your flower beds and veggie garden will lead to a great crop of slugs. Get your slug baits out now (yes, there are organic baits) and continue to bait as it’s going to be a wet spring and summer.

I trapped two voles early in the season, then none. Not a single one. That’s very unusual. I know there’s been a big black cat lurking in the neighborhood, and I saw it chasing a rabbit this morning so that could be one explanation. But one evening when I was taking the dog out the back door, I heard a hoot that gave me another clue. There was a great horned owl in the tall trees just 20 feet away. The owl also left a calling card in the form of a 16-inch-long feather. Between the hoot and the meow, I’m a happy gardener. Now on to the groundhog that’s hanging out next door.

Yes, now is a good time to get your first application of fertilizer on your lawn. Modern lawns with improved grass varieties can do well with 2 pounds of nitrogen per 1,000 square feet. More than that will result in excessive growth, mowing and possible groundwater contamination. Oh, Gypsy moths are no longer Gypsy moths. They are now called spongy moths named after their “spongy” egg masses. Keep growing.

In last week’s column, we took a look at the magnificent and exotic woody vine ... 14 Mar 2022 by Andrew Messinger

Wisteria: A Vine For The Ages

In a few weeks, some lucky locals with south-facing walls — planted with a magnificent, ... 7 Mar 2022 by Andrew Messinger
×