Much Effort For A Passive House - 27 East

Much Effort For A Passive House 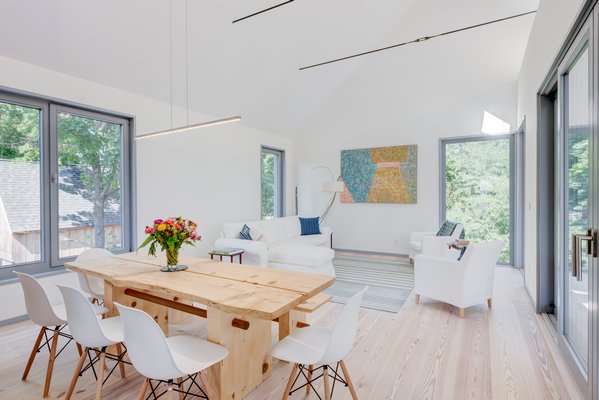 Many strive for it, but few actually build a passive house—a construction feat that was first sought in response to the energy crisis in the 1970s and was popularized in Europe for the sake of building the most efficient house possible. “A passive house meets its heating demand through ‘passive’ sources such as solar radiation or heat emitted from its occupants and appliances,” said Wayne Turett, the principal of Turett Collaborative Architects in Manhattan.

Mr. Turett, an architect who has designed luxury apartments and commercial centers, said the practice far exceeds even the typical green home.

For instance, a passive house consumes about 90 percent less heating energy than existing buildings, and 75 percent less energy than an average new construction—all with the goal of reaching net-zero, or relying little or not at all on fossil energy sources.

Only a few homes on the Twin Forks have actually achieved the rigorous passive house certification. And Mr. Turett’s new all-electric home in Greenport is on its way—hopefully.

“This home could possibly be a net-zero house, which means that if I have solar panels and I have very little demand of electricity I could possibly power the house by a solar panel with a battery and stay off the grid,” he said. “Here, it was extremely difficult to find the materials and the labor that could put this house together, but in Europe, if you go into their version of a Home Depot, those things that I had to import are just there on the shelves. It’s just the way they build.”

He was unable to find a builder who was knowledgeable in passive house standards, so he acted as his own construction manager to design and build his new weekend home on the North Fork.

The contemporary barn was built to match the aesthetic of historic Greenport. The two-story home is heated and cooled with a heat pump, and aided by an energy recovery ventilation system, or ERV, which regulates incoming outdoor air to freshen stale indoor air.

“The house becomes a sealed envelope so that any air that infiltrates is very minimal, especially compared to code,” Mr. Turett said. State code mandates a home is sealed to have at most three air exchanges per hour—a passive house requires 0.6.

“The ERV is basically a box with a fan that takes the outside air and brings it into the habitable room and exhausts stale air out of the bathrooms and the kitchen,” he continued. “And that’s constantly running, but the trick is it’s exchanging the energy from the inside of the house that you paid to heat or cool with the air coming in.”

The ventilation runs without making a noise. Unlike in many traditional homes, the long metal range hood over the stove doesn’t rattle with the wind blowing outside into the damper.

The walls are insulated with fiberglass, sheathing, polyiso foam board and cedar siding. The metal roof—layered with polyiso and 10 inches of fiberglass in the rafters—further shelters and sheaths the home in the winter when snow accumulates. By making the house nearly airtight, Mr. Turett said this eliminates thermal bridging.

“Consider the way a traditional house gets colder or warmer because of the conduction through studs from the outside to the inside; a passive house removes bridging by having a barrier between the stud and the outside,” he said.

All of these advancements in home building technology help the house get closer to the owner’s energy efficiency goal, but it wasn’t necessarily like this when home builders first started to reimagine architecture to comply with a growing need for energy conservation.

“It was first thought of during the oil crisis of the ’70s in the U.S.,” Mr. Turett said. “Architects became resourceful. Other methods of heating water and orientating houses were thought about. Solar panels were becoming a thing. But a few years later, energy got cheap again and builders and owners abandoned those practices. Europe picked it up and ran with it.”

In 1991, the first real passive house was built in Darmstadt-Kranichstein, Germany, by Wolfgang Feist, the founder of the Passive House Institute. The institute created the standards for producing homes that excel in thermal insulation, ventilation and energy conservation.

The institute praises passive houses internationally during a week each November and encourages homeowners to open their passive houses to the public.

As seen on such a tour, Mr. Turett’s home is positioned so that large triple-glazed windows and skylights on the cathedral ceilings in the upstairs combined kitchen, dining and living rooms face the south to get the most sunlight throughout the day, warming the house during the winter. During the summer months, overhangs cover windows from receiving too much sun.

“But by opening up the house, I can show that it’s not a weird house. It doesn’t have ears and a tail. It’s just built different and better,” he said.

Mr. Turett calls his new home “an upside down house”: the three bedrooms are on the ground floor and the open floor plan entertaining space is upstairs with views of the water. A breeze comes in from the open tilt-and-turn windows and glass lift-sliding door, which leads out to a dining room terrace. With its own dock on Stirling Basin, the home features an outdoor shower that leads to a downstairs bathroom.

The kitchen is made up of a furniture system that uses aluminum tubes and connectors to be assembled and reconfigured in many different ways—almost like a child’s play set. The drawers pull open like file cabinets and the cabinets are made of Lycra fabric. The exposed wood on the countertops match the heart pine floors. A small family room, a bathroom and a reading nook a-re around the corner.

All told, Mr. Turett said the passive house movement is gaining popularity once again in the United States because of efforts to protect the environment and lessen dependency on fossil fuels.

“I feel it more on the road than here. I drive my electric car and I see the tailpipes of other cars have exhaust coming out,” Mr. Turett said. “But perhaps I will feel that way about the neighboring houses, seeing their smoke stacks. They don’t have to be big, leaky and energy inefficient. They can be very efficient and very comfortable. They can save a lot of energy. They can save a lot of the environment.”