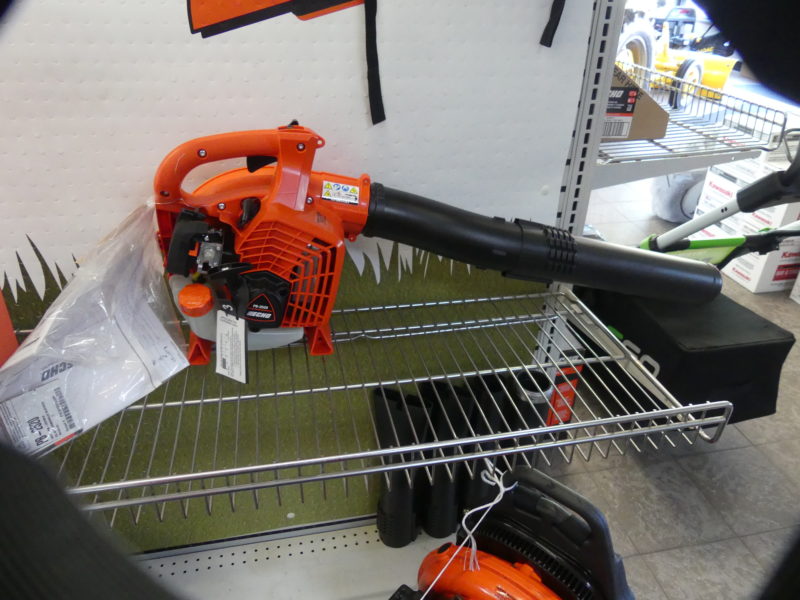 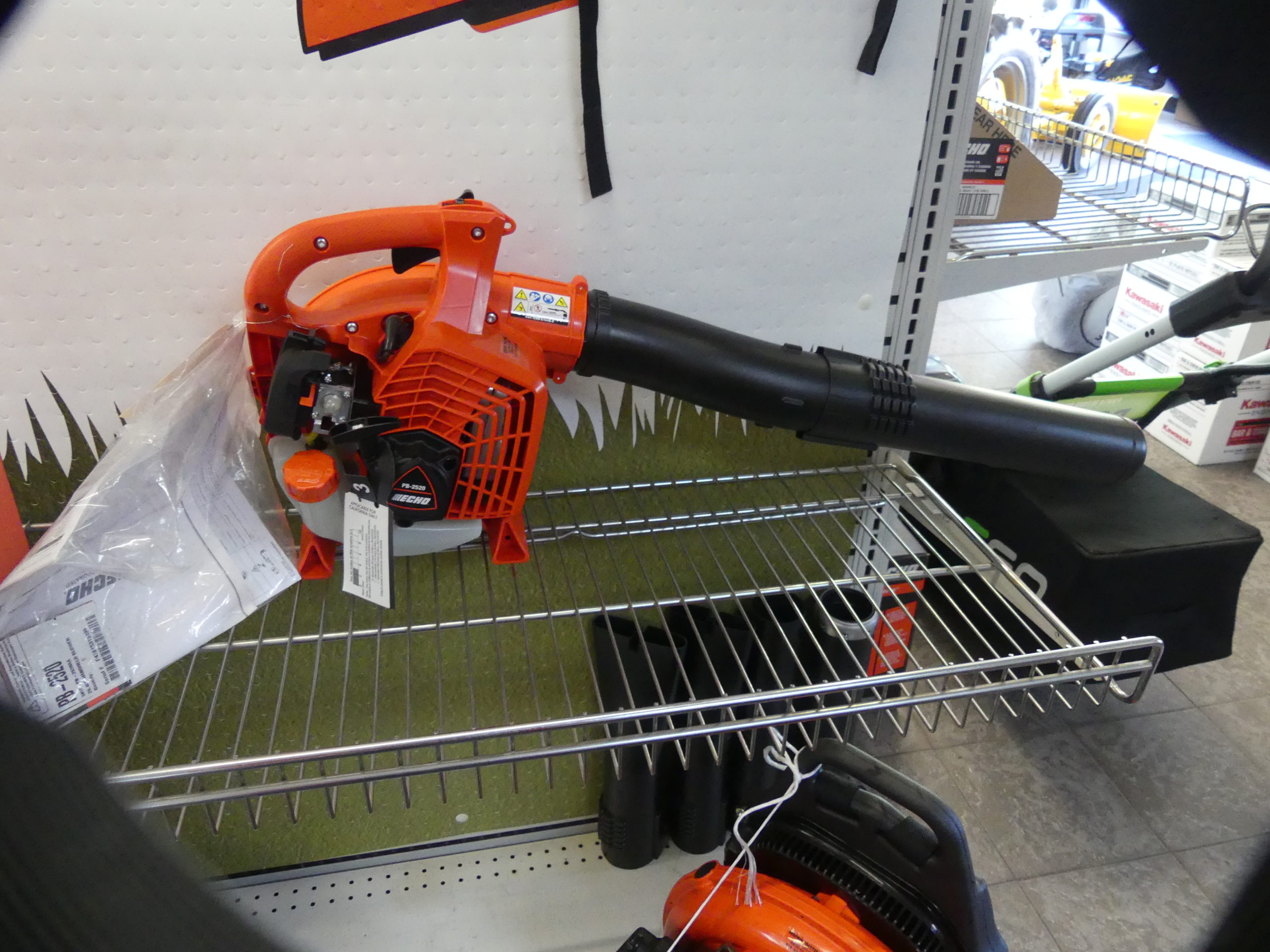 This much smaller Echo model claims only 70 decibels and seems an attractive choice for small properties. Remember though, it’s not just the noise, it’s the pollution from the two-cycle engine that’s a problem. ANDREW MESSINGER 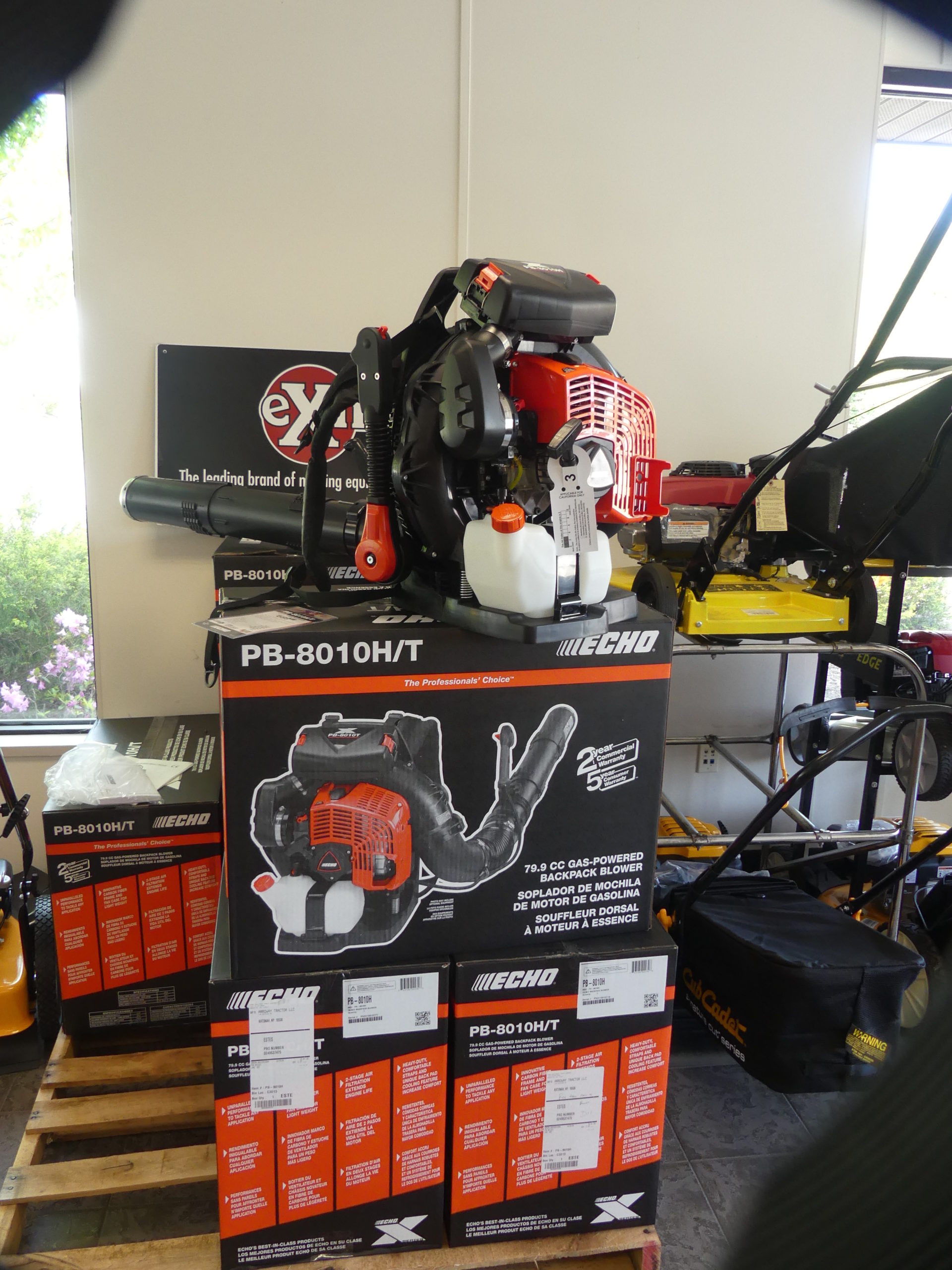 This is Echo’s newest and most powerful leaf blower. They claim it’s only 80 decibels, which is just 5 decibels below what can do ear damage. But that’s 80 decibels out of the box. How long does it stay that way? And as we now know, there’s more than sound pollution that comes from these blowers. ANDREW MESSINGER 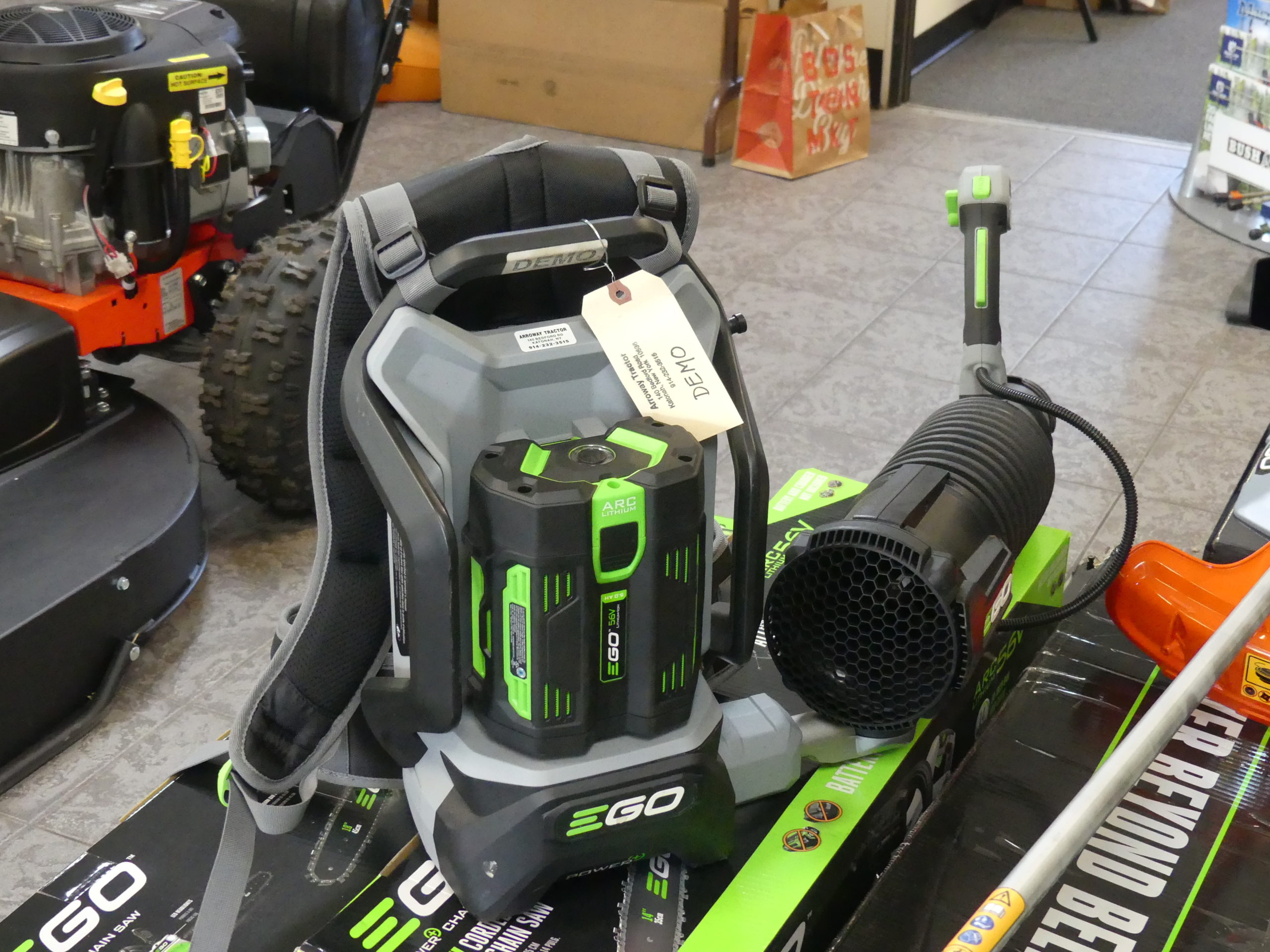 This Ego Power+ (about $400) battery-powered leaf blower may not make it for the pros, but for homeowners it’s eight times quieter than a gas blower and only 12.5 pounds. The bad news is that on high power the battery only lasts about 25 minutes. That’s plenty of time for many properties but for $120 you can get a second battery for 50 minutes of run time at high power. No gas, no emissions. There are other more powerful electric commercial blowers. ANDREW MESSINGER

It’s a warm, sunny spring day, and I’ve come home to have my lunch on the balcony. It’s a Thursday and that means the landscape crew is on site at the condo complex cutting the grass and cleaning things up. The grass cutting completed, the small army of guys with gas backpack blowers begin their weekly routine of blowing stuff around.

I’ve got the downstairs bedroom sliding door open but screened. The upstairs slider is open, also creating gentle air movement all through the apartment. The landscaper begins to blow off the small downstairs patio even though there’s nothing on it. He blows the landscape beds, forcing the bark mulch to move this way and that, leaving bare spots. My fire alarm goes off and all the sensors in the apartment blare in synchronous beeps and screams.

The alarm company calls to tell me they’ve received a fire alarm and the fire department is on the way. In minutes the three fire trucks pull up, but before they enter the alarm shuts down. It’s happened before. The smoke detectors seem to detect the exhaust from the two-cycle blower engine as it spews out its toxic gases.

Few to no leaves to blow and yet four guys are using four backpack blowers to “clean things up.” Walkways and parking lots are part of the list. Weeks earlier a huge truck appeared and these same guys used wheelbarrow after wheelbarrow to move the dark colored mulch from the truck to the landscape beds. The same beds that they’ve just blown to smithereens, exposing bare spots. The mulch that has now been blown into the driveway gets blown yet again, collected into barrels and put in a truck to be recycled.

Just to make sure everything is spotless, a wheeled, gas leaf blower is used to clean up the blacktop areas. Its muffler is broken, and the noise is deafening. It’s belching smoke, but the blacktop, which was never dirty, is now “clean.” Management says this is what residents want and expect. The fire trucks leave. My son, one of the firemen, shakes his head in disbelief.

Leaf blowers like these were invented in the mid-1970s, and within a year they were being banned or restricted in several California communities. In recent years these restrictions have grown and become scattered nationwide. The rules are often inconsistent and confusing to both landscapers and homeowners. Oh, and did you know that just one of these leaf blowers operated for 30 minutes discharges as much pollution via its aerosolized exhaust as a Ford F-150 truck driven from Texas to Alaska? We breathe this stuff. Your vulnerable children breathe this stuff. The landscapers, maybe the most vulnerable, breathe this stuff.

Other than the obvious noise, the problem with these leaf blowers is how they use fuel. The two-cycle engines need a fuel mixture of gasoline and oil. A least a third of this mixture isn’t burned and is emitted as an aerosol in the exhaust. We breathe it.

Only a few years ago many municipalities on Long Island, Westchester and Connecticut began to react with restrictions. The reaction was primarily to the noise in hamlets and villages where homes are close together. In some areas the restrictions were less stringent in the estate and 4-acre-plus zones as the noise wasn’t thought to be that bad of an issue. Lost in the conversation was the environmental damage and health issues — the exhaust gases. There is also evidence of damage to amphibians subject to the disruptive blowing forces.

In the Town of Bedford, in Westchester, where more than a few Hamptons dwellers have their primary homes, the Town Board is now considering a complete ban on these gas-powered leaf blowers. A citizens group has been active for years doing research on the effect of these machines and has amassed a large community group that is asking the town to ban them all together. The town set up an official task force to review the problem and make recommendations. A few weeks ago, they did. The task force had made recommendations a few years ago that resulted in one set of rules for the town’s hamlets and another set of rules for the larger properties. Again, much of the point was missed. It wasn’t just a noise issue; it was a serious air pollution issue. It was agreed at that time to revisit the issue, and now that’s been done.

Keep in mind that there was a time when these leaf blowers didn’t exist. We survived. Kids raked leaves as part-time jobs. Moms and dads raked leaves and yes, even landscapers raked leaves. We used rakes and brooms while others use human-propelled leaf sweepers or tractor-pulled leaf sweepers. Most of us now use mulching mowers that reduce leaf volume to the point where they rarely, if ever, need to be picked up.

The Bedford leaf blower task force has asked the Town Board to implement a rapid and complete ban on all leaf blowers. Nearly 50 residents on the Zoom meeting supported the ban. Two landscapers who have converted their operations to battery-powered blowers supported the ban. The superintendent of public works said his crews have had limited success with battery blowers, especially when they are under the gun in the fall doing curbside leaf cleanup. What did they do before blowers were invented?

The director of parks and recreation said his crews too were using electric blowers, but that since they might be out all day cleaning up the parks it really wasn’t practical since battery life was too short. Maybe they can’t afford spare batteries?

Someone who worked or managed a horse farm said they couldn’t possibly run the operation without these blowers. Hmm. I’ve run three horse operations over the years with from four to 16 horses. Yes, blowers are helpful in a barn or stable, but electric ones, not gas ones. No one has proposed a ban on electric blowers. Oh, and what about the blowers they use on the farms in general? Well, these are often PTO (power takeoff) blowers that don’t have gas engines and get their power directly from the tractor PTO.

It seems like the only exception that might be worth consideration is limited use on golf courses where it’s critical to have certain spots like greens dry and clean. Only the high velocity of the gas blowers may be able to accomplish this particular task, but the battery-powered units are catching up fast.

For highway and parks departments, how much of the “won’t work for us” is a reluctance to use manual labor, and is there a hint of machismo here? Yes, battery blowers now available may not be as powerful as “needed.” So, it takes a bit longer, the bill is a bit higher. Remember though: We all breathe the exhaust from gas leaf blowers.

Landscapers complain they can’t get the work done with battery units and that it will increase the cost of business. Are you willing to pay more to avoid respiratory diseases and hearing loss due to these machines?

There are other factors to consider also. Battery-operated blowers are not without their issues especially the recycling of the spent batteries. However, several businesses are now in operation or being set up to handle these batteries by recycling the materials in them. This isn’t a solved problem, though, and that’s why any new legislation should be revisited in several years to ensure that recycling technology has kept pace.

What about the health issues? We are now in a time of renewed social responsibility, and that, my friends, includes considering those who operate these blowers eight or more hours a day, day after day, week after week, month after month. These people are vulnerable, most often without any health insurance coverage, and they deserve our support. They are reluctant to complain and thus jeopardize their livelihoods. They may indeed need our unselfish support. If it means a few hours more of work pushing a broom or rake, let’s pay the price.

What do I do? We have a home on a lot of just under an acre. I own a gas-powered leaf blower. It hasn’t been used in over two years. Instead, I use an electric blower since an extension cord will safely reach just about everywhere. It not only acts as an effective leaf blower but, when in reverse, it mulches the leaves I collect. There are a range of battery-powered blowers as well but read up and compare models before you buy one.

So, this is a call to our East End elected municipal officials. It’s time to ban these gas-powered leaf blowers. End the noise, end the pollution, end this unnecessary despoliation of our fragile environment. And when you do pass legislation, make sure you have the tools to enforce it.

If you’d like to see some of the information presented by the Bedford Leaf Blower Task Force use this link: https://bit.ly/3o1fxQB. It’s about an hourlong, and I was particularly struck by something around the 25-minute mark that falls under the category of unintended consequences. There’s also a more general information site on gas leaf blowers by Healthy Yards that you can find here: https://bit.ly/3evjjid. Keep growing.

The Time Is Here To Repot Pot-Bound Houseplants

This is the perfect time to repot houseplants if they are showing signs of being ... 17 May 2021 by Andrew Messinger