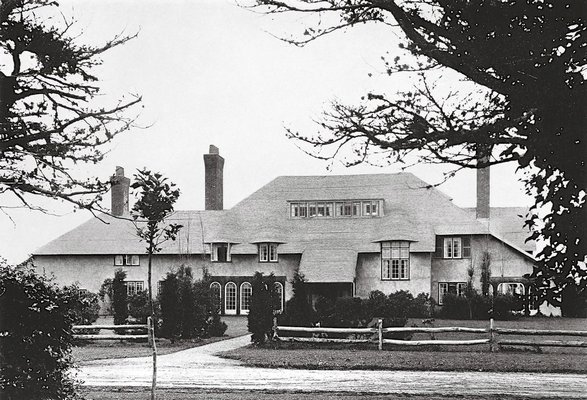 Coxwould with the famous Lindeberg roof

A look at patrician history, big and small, was delivered last week by interior designer David Netto, con brio, with modern takes on style in East Hampton, one of America’s most beautiful places. The Maidstone Lecture for the East Hampton Historical Society, titled “New Life in Old Houses: Architecture & Desire in East Hampton,” took place most appropriately at the eponymous Maidstone Club.

Mr. Netto’s presentation started with a discussion of “old-time” East Hampton and what elements characterized the identity of this place. As a child, he summered here and rode his bicycle all over the village while viewing the houses that made East Hampton “East Hampton.” If he had to pick the quintessential house that could define East Hampton’s character, it would be Coxwould, the residence of Dr. John and Teresa Erdmann (1912) on Lily Pond Lane, designed by architect by Harry T. Lindeberg.

Dubbed the “American Lutyens,” this architect was renowned for inventing the Lindeberg roof — influenced by the utilitarian farm buildings of old New England, the South and the cottages of England’s Cotswolds. The wavy roofline of cedar shingles, meant to resemble English thatch, and punctuated by a few dormers, descends two and a half stories and ends over the low entry porch.

Lindeberg disliked gables breaking up rooflines, as well as “unmeaning ornament or showy paint — all of which are a source of wasteful expense and depressing things to live with.” He believed that country houses should only be two stories high, with just a step down to grade to keep a relationship between lawn and garden.

Mr. Netto also mentioned Lindeberg’s nearby Lutyens-like Alcott house, which also displays a two-story, sweeping roof, ending in a flared curve at the edge of the eaves. From there, he showed a picture of the late architect Francis Fleetwood, sitting in front of a house with this “relentless” roofline, which became his signature motif in the 1980s.

When these houses, although large, so defined the look of East Hampton in the early part of the 20th century, they paid careful attention to scale and massing — something that has gone by the wayside today. Mr. Netto observed, “No rich person today will tolerate dormers in a master bedroom.”

The work of prolific local architect John Custis Lawrence in the early teens, also cited by Mr. Netto, heralded the development of the attenuated house. These homes, some fashioned with colonial- or shingle-style-era details, set a precedent for the construction of linear homes, which still exists to this day.

Of all the architects who interpreted local vernacular and regional idioms, Mr. Netto singled out the work of Alfred Sheffer, known as the “dean of East End architects” from the 1940s until his death in 1976. Sheffer took his cues from small, wooden Cape Cod cottages and barn structures to invent exquisitely detailed cottages presaging and influencing the post-war vacation home.

The interiors of these small homes, most well under 1,000 square feet, were distinctly modern, with open plans for the living, dining and kitchen areas. In the houses with barn-type massing, Sheffer inserted huge windows both to bring light in and open the space to the outdoors.

Mr. Netto bemoaned the fate of a 1963 light-filled, West End Road Sheffer home as a potential teardown. After all, who would spend $26 million and keep a one-bedroom oceanfront house on 3.5 acres?

New times in the Hamptons, according to Mr. Netto, brought Andrew Geller’s Pearlroth house, aka the Double Diamond house in Westhampton Beach. Pierre Chareau built a Quonset hut for artist Robert Motherwell. The house was one of the first to usher in a technological approach and a new ideology where, unlike the older houses, it didn’t need to relate to its site or orientation.

In 1967, architect Charles Gwathmey designed a home for his parents that also was meant to be an object in the landscape. The revolutionary design was an abstraction of the shingle-style elements rendered in modern form.

Richard Meier followed suit with the Rennie Salzman house, and in Mr. Netto’s opinion it was a bit more lavish and irresistible. The house captured changing light during the course of the day, even becoming a lantern at night.

Both architects, members of the “New York Five” — also including Michael Graves, Peter Eisenman and John Hejduk — were heavily influenced by Le Corbusier’s Villa Savoie. This group became one of the major influencers of its time.

With the publication of Robert Stern’s “East Hampton’s Heritage” in 1982, that summer saw a shift in taste as postmodernism came of age and “the summer of money” rolled over the Hamptons.

In David Netto’s own work, his take on design is rather eclectic. He has been enlisted as “a McMansion rescue service” to “infuse” and “insert age, patina and humility,” for example, into a 12,000-square-foot house on Meadow Lane. He broke the house up into zones by creating interstitial spaces of a different color between areas, using light blue porch planks on the floor while creating a family mural.

For a traditional new home designed by architect Gil Shafer in Southampton for younger clients who are collectors, Mr. Netto provided resin tables by Wendell Castle and works of other contemporary artisans.

For his own home, Mr. Netto purchased the cheapest house he could afford on the ocean. Built as a contemporary hexagonal, he remodeled the home on a small budget. He asked his father about a Dhurrie rug the family had in their home years ago and wondered if he could have it. The rug had been cut in half, but he told Mr. Netto he could take the remaining half — which turned out to be a perfect fit for the living area. Borrowing a Sheffer trick, he opened up an entire wall in the living room with glass for the view. And how could he not include an eyebrow window over another wall segment.

Mr. Netto’s interiors all look inhabited and actually reflect the lives of the individuals who live there, with their own personal, symbolic content.

When asked about the new, huge modern houses, whose only core values have to do with the lavishness of materials, he called those houses “pig-outs.”

What bothers him even more is the fact that little is being done to preserve the historic houses of the East End. He ended by saying, “The fancier the address, the less likely it will be saved.”

If Mocomanto were to be recreated in Disneyland, which version of the historic house would ... 5 Feb 2018 by My27east

A demonstration and talk by Prudence Heston, held on Saturday at Salt Air Farm in ... 22 Jan 2018 by My27east
Sign in to comment