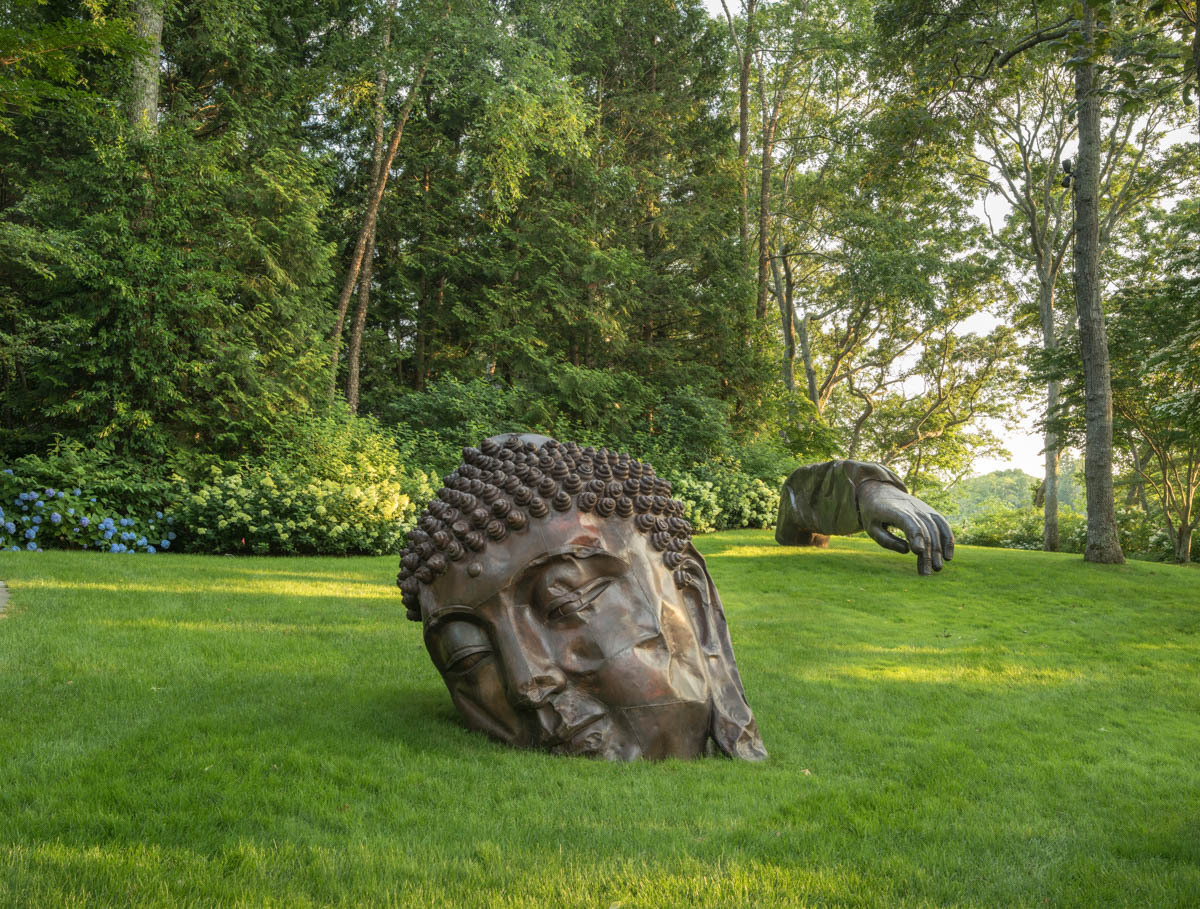 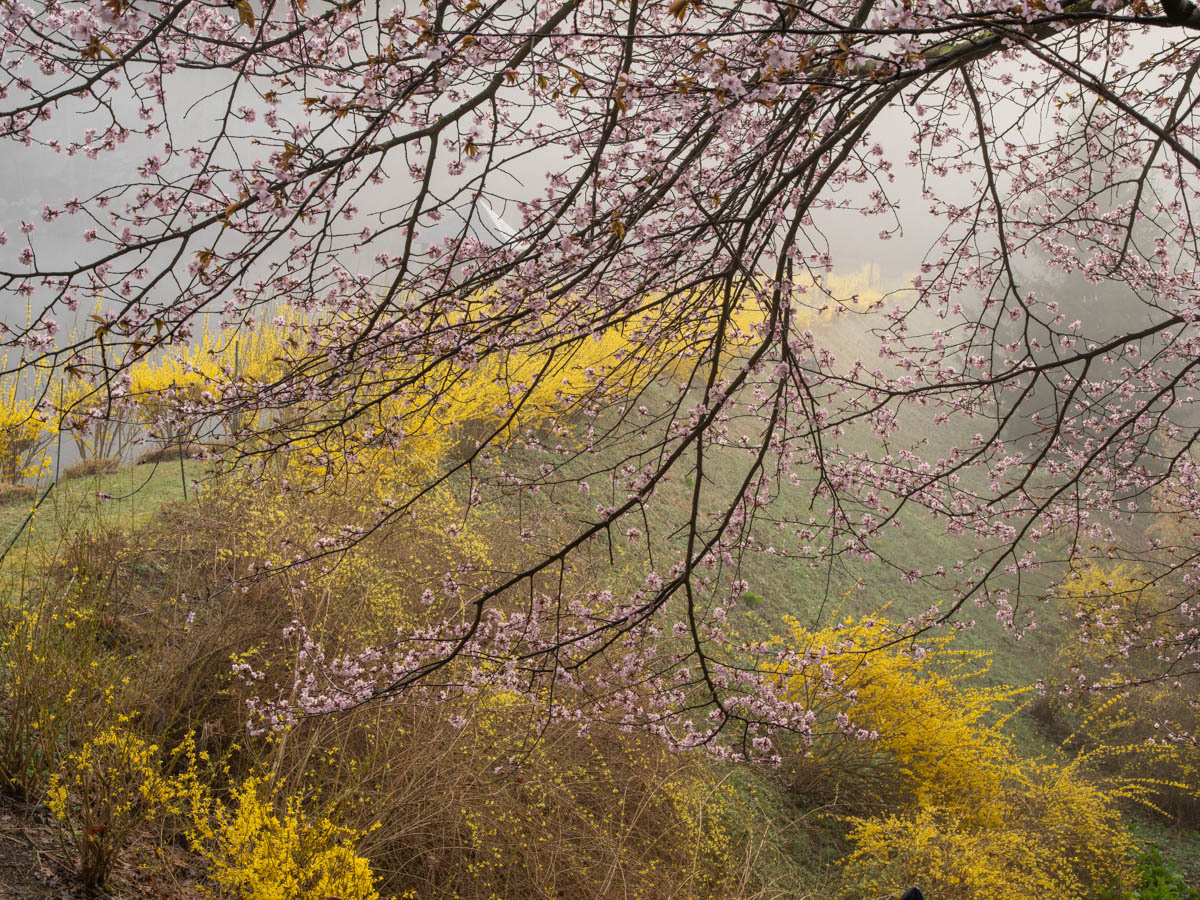 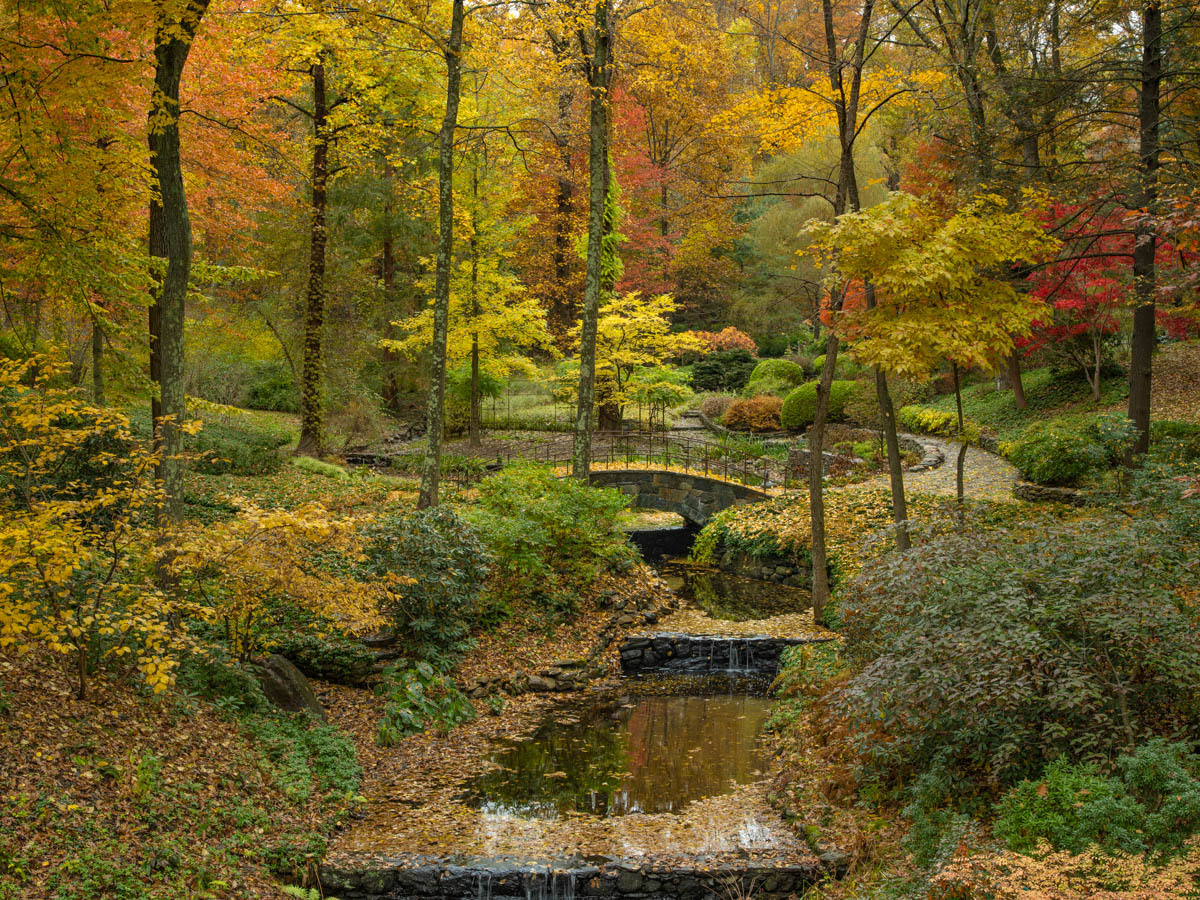 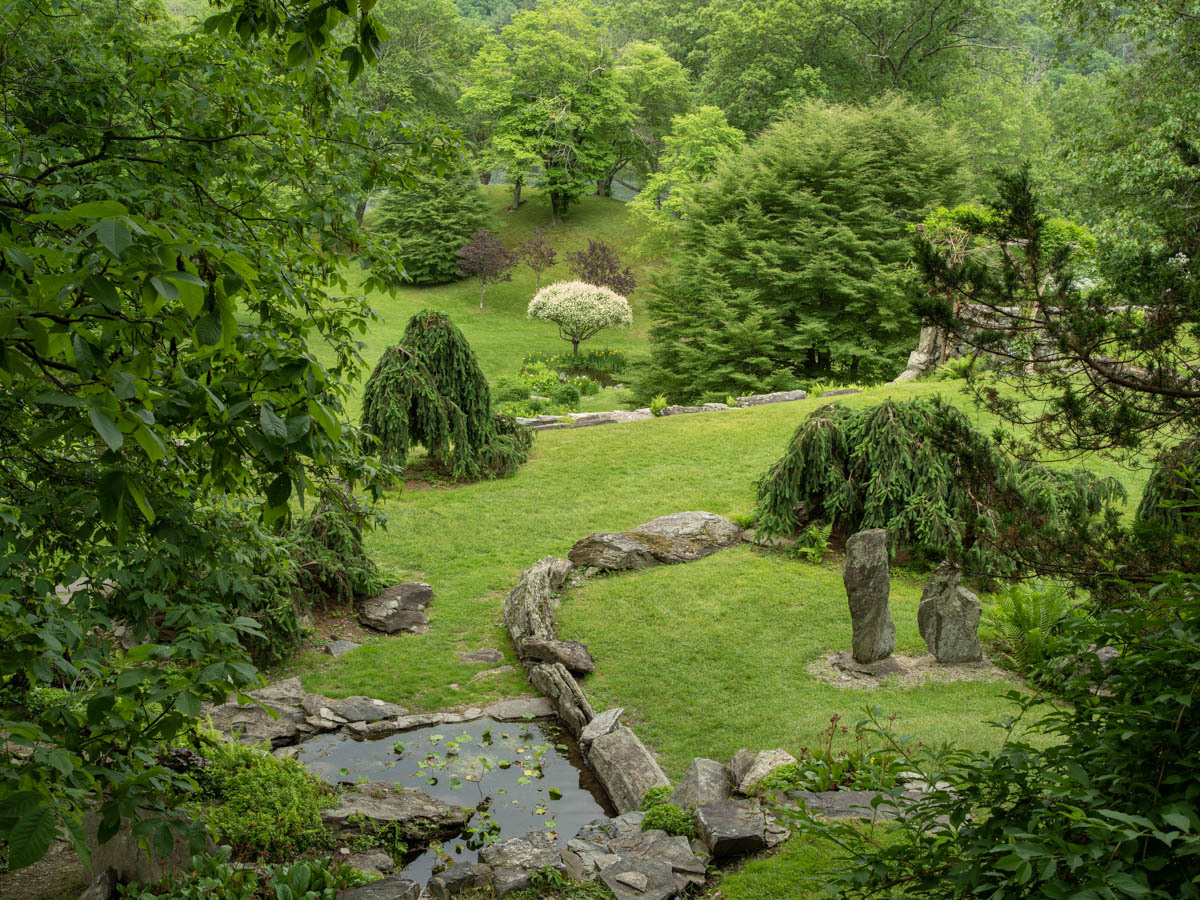 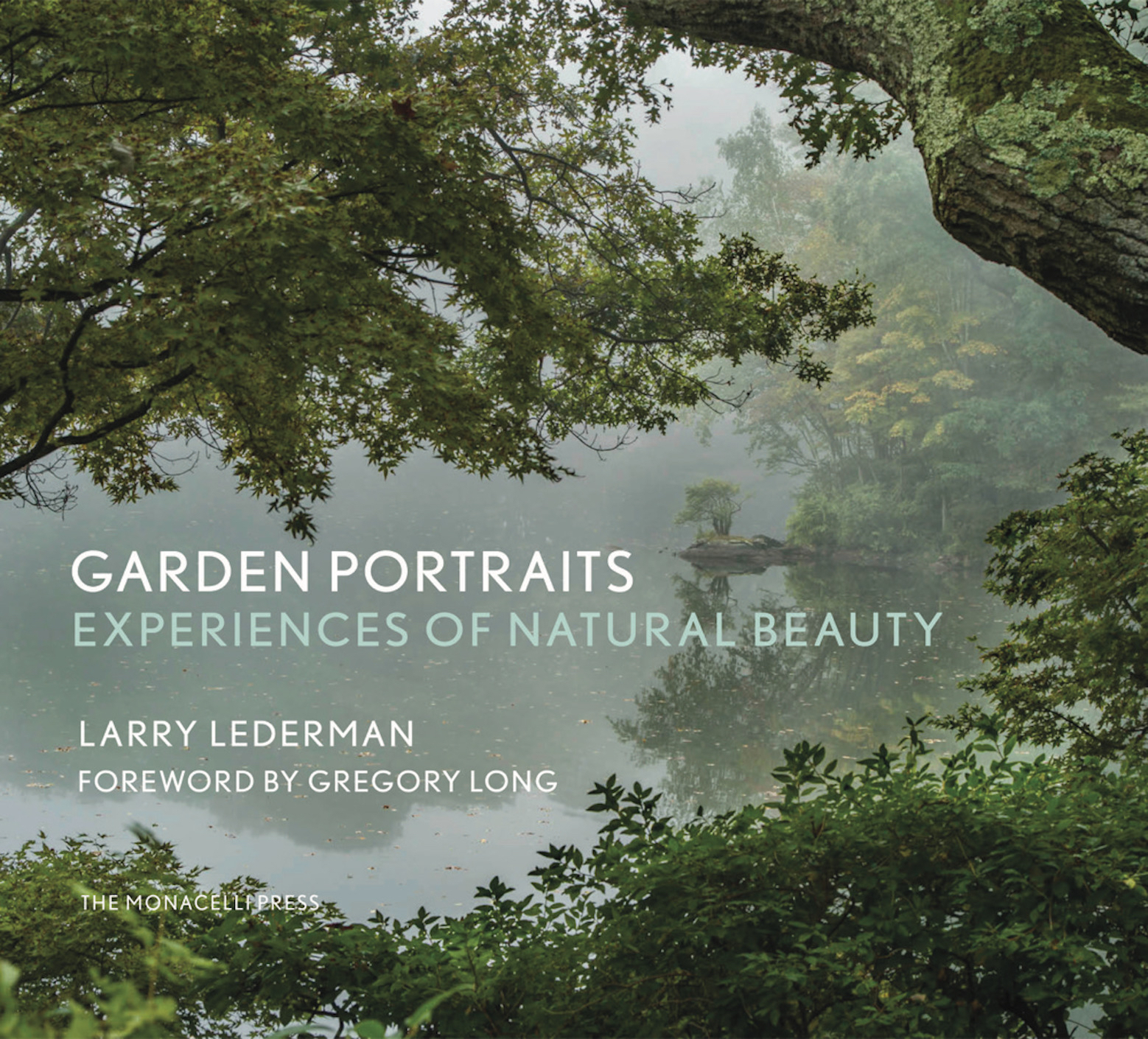 From the lush green and flowering landscapes of spring to the blazing yellows, oranges and reds of woodlands in fall, Larry Lederman’s “Garden Portraits: Experiences of Natural Beauty” captures stunning views and fleeting moments in public and private landscapes around the states of New York and Connecticut — including an international gallerist’s own East Hampton garden.

Mr. Lederman is a retired lawyer and self-taught photographer who, himself, once lived on the South Fork with his wife, interior designer Kitty Hawks, in Bridgehampton. These days the couple lives in Chappaqua, where Ms. Hawks designed Hawks Nest, one of the 16 gardens in the book from Manhattan’s Monacelli Press.

“It’s not a straight path, OK,” Mr. Lederman said of his journey to becoming a successful photographer, “but I had fun doing it, and over time I’ve gotten very, very serious about it.”

It started when he became interested in learning more about the trees at his Chappaqua home, and he began photographing them. He then began to shoot the New York Botanical Garden in the Bronx, and that led to many opportunities.

“I was on the board of New York Botanical Garden, not because I was a photographer, but because I was a lawyer,” he explained. He had been on the board for a number of years before he started shooting photographs at the 250-acre site, arriving early on Saturdays and Sundays to spend a couple of hours there with his camera. “The New York Botanical Garden has … 50 gardens, including a native forest, so it can occupy you for a while,” he said.

He said the camera was at first an adjunct for him to study the trees, but then he grew more interested in photography. He observed that many landscape photographers shoot national parks and similar sites, but few shoot gardens.

“I saw in the garden the opportunity to create art, because painters did it,” Mr. Lederman said.

He explored museums and borrowed books from libraries on art and painting, especially the impressionist painters.

Admittedly, he said his early photographs weren’t very good. He said he had decided he wasn’t going to be any good at photography, but he didn’t care — so he didn’t have any ego involved.

He reasoned that his photographs of the botanical gardens would, at least, be history in a sense, he said. “I would be recording something, and maybe the photographs would be of use at some point. On that basis, I stuck with it, and actually, over time, I got good.”

More books followed, including “The Rockefeller Family Gardens: An American Legacy,” featuring gardens in New York and Maine, and “Interior Landmarks: Treasures of New York,” the latter of which gave him experience shooting interiors.

His book “Frederic Church’s Olana on the Hudson: Art, Landscape, Architecture” documents the estate of the leader of the Hudson River School painters.

“I spent some time actually following in his footsteps,” Mr. Lederman said of Mr. Church’s journeys. “So I went to Niagara — I spent some time in Niagara. I actually went up to Newfoundland to photograph the icebergs, which he had [painted]. He had done that in 1859, and I was there in 2009, 150 years to the day when he did it — and it was the same.”

The photos he took of the icebergs have a timeless quality: “You can’t tell what century they’re from, really,” he said.

When it comes to gardens, he’s drawn to woodlands and formality, but he said he also likes to challenge himself, from shooting a small, intricate garden, to some place huge, where he tries to provide a sense of place and beauty in a small number of photographs.

Though Mr. Lederman and Ms. Hawks also have a place in Manhattan, due to the pandemic they have been staying at their Chappaqua home consistently since March of last year.

He bestows all the credit for the design of their gardens to his wife. In “Garden Portraits,” a narrative explains that they started in 1992 with 4 acres with mature maple, oak, tulip and pine trees and a stream running through a gorge to a small reservoir. They later acquired adjacent wetlands and have added a series of waterfalls, a greenhouse and a rose garden.

Ms. Hawks studied books on English, French and Italian gardens and the work of Vita Sackville-West, Piet Oudolf, Tom Stuart-Smith and other garden designers to inform her design of Hawks Nest, and planted groundcovers like pachysandra and hosta in shaded areas where other plants struggle.

Mr. Lederman went to Monacelli Press with a proposal to shoot Hawks Nest and 14 other gardens for the book that would become “Garden Portraits,” and ended up with 16 gardens in total when all was said and done. There are public spaces, including the renowned 150-acre Innisfree Garden in Dutchess County, and private, residential gardens, including Milly and Arne Glimcher’s home on Georgica Pond in East Hampton.

Mr. Glimcher is the founder of Pace Gallery as well as a film producer and director. Ms. Hawks has done interior design for the Glimchers, and they are all longtime friends.

“Larry is a real marvelous photographer,” Mr. Glimcher said. “I think it’s quite a beautiful book. He’s very sensitive. He selects really interesting angles — not the obvious one — and I think he’s very conscious of capturing space, much more than elements, and that’s very rare. Usually people take pictures of gardens through one object and then you see the garden behind it. He doesn’t work that way.”

The Glimchers’ garden differs from all the others in “Garden Portraits” in that the 5-acre property is also a sculpture garden. Works dotting the landscape and complementing the trees and plantings are by Alexander Calder, Louise Nevelson, Joan Miró, Julian Schnabel, Henry Moore, Kiki Smith and Zhang Huan. A small white “house” with black outlines and shapes by Jean Dubuffet is in the tradition of a garden folly — a structure meant for whimsical decoration.

“There are follies all over the world,” Mr. Glimcher said. “It’s a destination to go somewhere, usually as some kind of fanatic creation.”

Mr. Lederman shot from inside the folly looking out, viewing the light coming through the trees.

The garden began about 38 years ago, Mr. Glimcher said. “It takes a very long time to build a garden, and then that’s never finished.”

At first, they had hired someone to come in to build a berm to protect the house from the street and provide privacy. The berm was planted with black pines, which were shortly thereafter destroyed when the black pine beetle came, Mr. Glimcher recalled.

He thought he could do a better job, and spoke to and became friends with Charlie Marder of the Bridgehampton nursery Marders.

“I recreated the berm using many different kinds of trees, using both deciduous and nondeciduous,” Mr. Glimcher said.

That gave him the gardening bug, and he began drawing plans for the garden and spent time each summer on it.

“Sometime later, I started adding sculpture, but that was never the idea,” he said. “The idea was something that was green, and a lot of our garden is a shade garden, so you have to deal with things that don’t flower, or flower for a shorter period of time”

He’s amassed a big collection of hostas and every shape and color of hydrangeas he can find.

“I started adding things, things that live in the shade and that flowered, and that when they weren’t flowering would be very beautiful — the size, the texture and the differentiation of the leaves. And that’s how I built the garden, really. It’s not really complicated,” he said with a laugh.

The first photo of the Glimchers’ garden in “Garden Portraits” shows an egret in the pond. Mr. Lederman made a conscious choice to show the pond before the sculptures, such as the colossal head and hand by Zhang Huanm, and Kiki Smith’s “Scaffold Figure.”

“That shows you that it’s a natural environment,” he said.

In the book’s afterword Mr. Lederman writes, “A garden is a portal to the natural world, and, also and inevitably, a stand against nature’s relentless encroachment.”

He explained: “As soon as you have a garden, you’ve got to weed it. You’ve got to take care of it. Otherwise, it disappears on you.”

Grassroots organization Drawdown East End will share best practices for using less water and reducing pollution in lawn and landscape maintenance during a free online event on Tuesday, February 9, at 6:30 p.m. Mark Haubner and Ellen Bialo will present “Lawn and Landscape to the Future,” offered through Rogers Memorial Library in Southampton. “Information leads to education leads to awareness: Our current lawn and landscaping practices are not sustainable with regard to water quantity or quality and we will be talking about all the best management practices available to us to change this for the better,” Mr. Haubner said. Drawdown ... by Staff Writer

A home that’s being marketed as the first 3D printed house in the country was ... by Grant Parpan