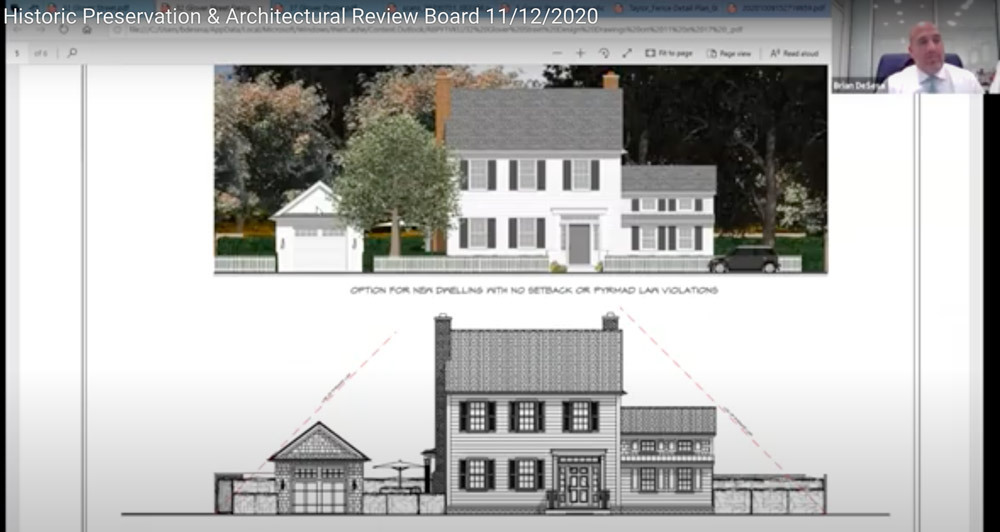 Renderings of a proposed new dwelling that conforms to setback and pyramid requirements on the Glover Street property, presented by attorney Brian DeSesa. 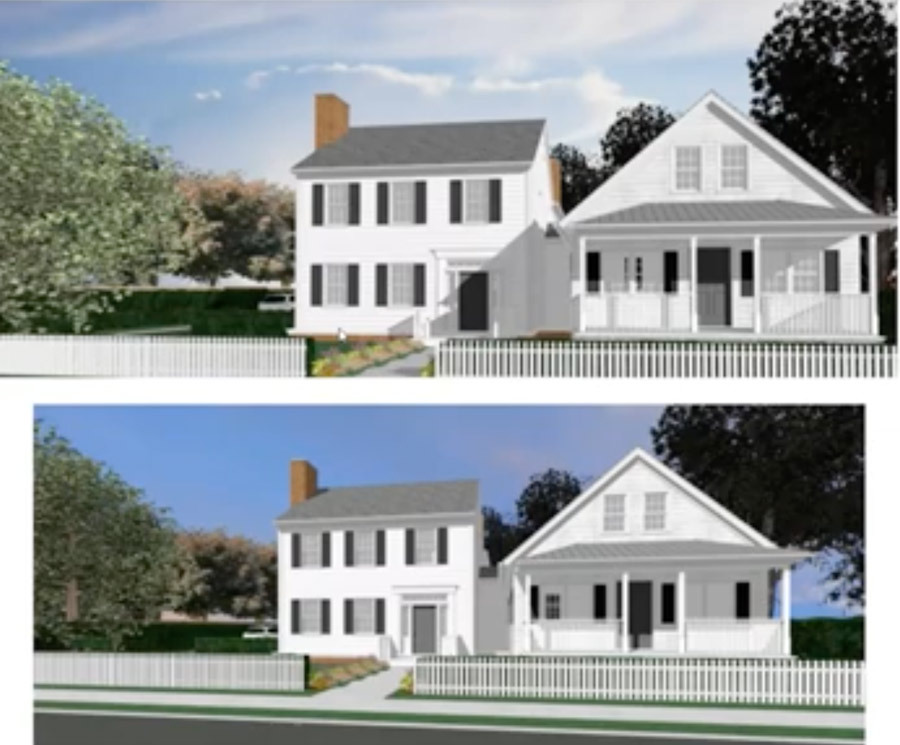 A rendering showing a new Greek Revival style addition with the original house on the right.

The Sag Harbor Village Board of Historic Preservation and Architectural Review rejected a proposal Thursday, November 12, to demolish and replace an early 1930s home in the village’s historic district and also frowned on an alternative plan to keep the existing house and expand it with a Greek Revival addition.

Brain DeSesa, the attorney for the applicant, Robert P. Herbst Irrevocable Trust, said at the board’s recent meeting that his client would like to knock down the house at 32 Glover Street and put up a house that is “more appropriate for the street” and further from the property line. However, the board’s historic preservation consultant, Zachary Studenroth, said the existing house is contributing to the historic district.

Mr. Studenroth said he toured the house, inside and out, with Mr. DeSesa, and confirmed the house is virtually intact from the construction period.

“The only avenue that I know of, identified in the code, that would allow for consideration of demolition would be an economic hardship,” Mr. Studenroth said. “There’s a clause for that effect, but I don’t believe that’s entered into this discussion. So I would recommend that the request for demolition not be approved, but rather that the owner seek other appropriate ways of enlarging the house to meet their needs.”

Mr. DeSesa said his understanding is that the board could permit the demolition if it was inclined. “Every house in Sag Harbor, the board could take note, is an economic hardship when, you know, cottages are trading for millions of dollars in terms of property value,” he offered.

“This little house is contributing, and it’s pinned on the property line,” Board Chairman Dean Gomolka pointed out. He asked Mr. Studenroth if the house could be saved, moved away from the property line, and incorporated into additions.

Mr. Studenroth said the options for enlarging a historic house that is essentially one-story tall are fewer than if the house was large to begin with. “But there no such thing as more or less historic,” he asserted. “This is one of over 450 buildings that were listed in the 1994 [historic district] nomination form.”

Mr. Gomolka pressed him on whether there is an option for moving it.

“The guiding principle that you employ with all of these proposals is, does the resulting design proposal minimize the existing structure to the point that it is no longer the predominant visual asset that we appreciate from the street?” Mr. Studenroth said.

He said he understands the challenge, but the house has been identified as a contributing element for the last 24 years. “So it hasn’t changed. The only thing that’s changed is a new owner bringing expectations to it. I feel that if that owner wants to come with a reasonable design proposal, you can judge it.”

He also noted that the Glover Street lot is large compared to most village lots. It is essentially a double lot that stretches north and could host a rather sizable addition, he said. “It would just have to be done in such a way that we are left with, you know, the visible impression of this contributing building. I think it’s a design challenge that’s all it is. … In any case, it does not deserve demolition.”

Mr. DeSesa came prepared with renderings showing a two-story addition, attached to the original house with a one-story connector. He said the “second house” would have a peak that is 6 feet higher than the existing house’s peak, but would be set farther back from the road so the original remains prominent.

“Would that be something that the board would entertain here if they were not to entertain the demolition?” he asked.

“Demo is just a nonstarter,” Mr. Gomolka said. “This is an interesting solution.”

Board member Judith Long pitched persuading the owner to move the house to another property entirely. However, board attorney Elizabeth Vail said that is outside of the board’s purview.

“The owner doesn’t want the house, so why not seek a way of getting him to give it to someone else?” Ms. Long asked.

“But the owner bought the house, so it’s incumbent upon them to do something creative with it,” Mr. Studenroth said. “I wouldn’t be comfortable enlarging a 1930s period bungalow with a sort of quasi two-story Greek Revival house. These two don’t go together.”

Mr. DeSesa said the purpose is to differentiate the original from the new. That is something historic preservation boards often ask for.

“No,” Mr. Studenroth said. “Differentiating might mean changing the siding from shingles to clapboard, or whatever — not going back 200 years in architectural style.”

Mr. DeSesa said that, now knowing the board’s parameters, he will come back with a new design.