Prune That Forsythia Now, But Only Once - 27 East

Prune That Forsythia Now, But Only Once 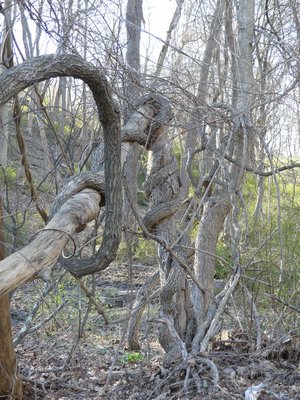 This serpent of the forest is a six inch thick vine that has strangled and toppled the thirty foot tall tree it was growing on. The vine might be 20 years old and had only one cut been made to the vine years ago the tree would have survived. Note smaller vines that have now ‘jumped’ to the nearby trees. ANDREW MESSINGER 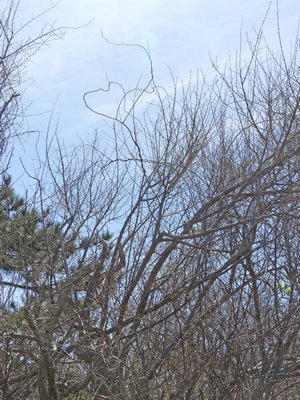 Invasive vines can be hard to spot when in leaf and when dormant but looking at the top and center of this picture you can see the bittersweet vine as it coils around the tree branches seeking the open light above the tree canopy. The vines don’t have to be removed but they do need to be cut at ground level. ANDREW MESSINGER 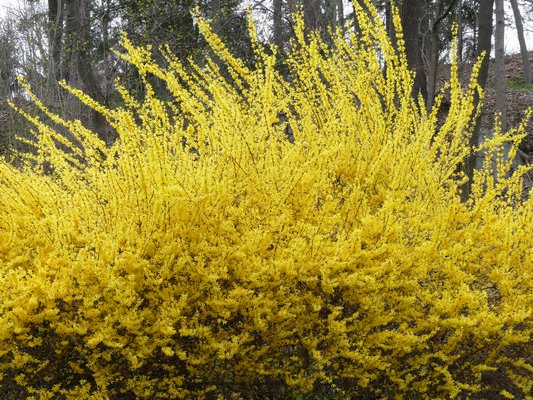 This Forsythia planting is a bright spot in what can be a dull period in the early spring landscape. This particular ‘cloud’ gets minimal attention other than an annual reduction of one quarter of the older canes just after flowering in early May. ANDREW MESSINGER 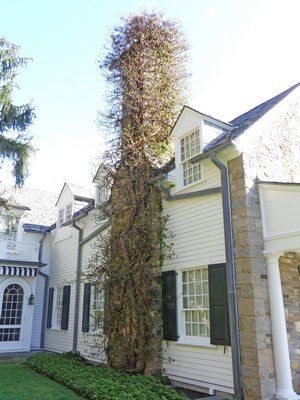 Climbing or creeping hydrangea allowed tof ‘adorn’ a two story stone and masonry chimney. In addition to damaging the masonry the hydrangea allows various animals access to the eaves and dormers as well as the chimney. A carful look at the top of the chimney in the center reveals a summer nest from grey squirrels. ANDREW MESSINGER 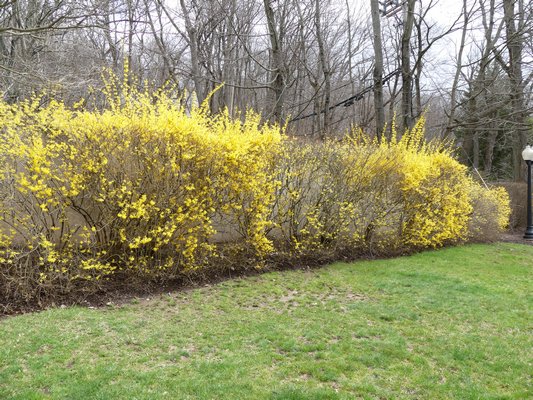 A hacked Forsythia hedge that is thin and has areas that at nearly flowerless. This hedge is pruned several times during the growing season to ‘keep its shape’ and the result, done by a untrained landscaping crew, looks like this. ANDREW MESSINGER 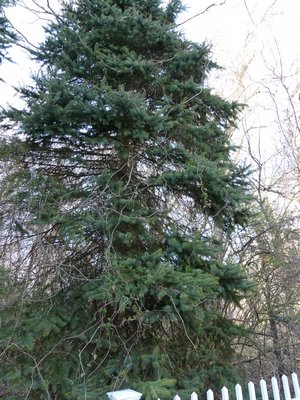 Invasive vines can damage and topple evergreen trees like this Spruce. The vines not only strangle the branches but deprive the tree of sunlight during the growing season. ANDREW MESSINGER

There is a certain art to gardening and horticulture—and I fear we are losing our connection with that art.This loss can be exemplified in how trees and shrubs are pruned, and the skill and vision of the pruner. And while the science of pruning can be learned, it’s only the very talented and most visionary who can prune and envision what the results of these cuts will do in the years and decades to come.

A case in point is one shrub that really needs to be pruned, even if just a bit, every year. Left unattended, it becomes straggly, leggy and unattractive in no time. But, with vision, an artistic hand and understanding of this plant, it can be quite beautiful and striking.

And, yet, most gardeners and landscapers simply hack their forsythias to the point where they look more like woody weeds than the dazzling yellow clouds that can brighten the landscape when our souls really need to be cheered.

The hacks who prune the forsythia outside our condo are just that—hacks. They come through several times a year with their gas pruning shears and “shape” everything in cookie-cutter fashion, without any knowledge of the plant they’re shearing and what its needs are. Here, the only goal is to shape and keep the plants uniform.

As a result, the forsythia suffers, is always thin and never attractive. And since they tend to prune it in mid- to late summer, they inevitably remove half or more of the buds that should be flowering the following spring.

And, in case you haven’t caught on, this is the time for pruning forsythia. Just after flowering, the oldest canes, about a quarter of them, should be cut, removed or reduced every year. This forces the production of new canes that grow vigorously through the spring and early summer, set buds and then create marvelous clouds of yellow next year.

Yes, the plant will flower on older wood, but the most intense and dense flowering takes place on 1-to-3-year-old canes and not the older ones. So, if you cut a quarter of your canes each year, your forsythias will thrive and put on a good show every spring.

Taking a hedge clipper or pruning shears to the forsythia and shaping it from the outside only will not result in a munificent specimen. Older canes need to be removed down into the center of the plant in order to stimulate the new growth that results in the best density of flowers.

But it’s also important to remember that no amount of pruning will change the color of the flowers. Inexpensive varieties bought at discount nurseries and online will be lackluster and dull. If you’re installing new plants, look for varieties that are new cultivars and known for their intensity and density. Most likely, these will be patented plants and will cost a bit more, but over the years they’ll certainly outperform anything you can buy for a few bucks.

Even if you have a forsythia hedge, now is the time for shaping it. Shear it only once after flowering to restore the shape, but also get on your hands and knees and do removal of the older canes by pruning them about 6 to 10 inches above the ground, then leave them be until next year.

If you don’t do the work yourself then speak with your landscaper or gardener and make sure they understand how important timing is on this plant. Explain that they should only be pruned once, now, and don’t let them touch the plants again until next year.

On another pruning note, vines, especially invasive vines like Oriental (now Asian) bittersweet, can start as tiny little shoots about the thickness of a strand of spaghetti. But each year the vine grows taller and its diameter gets thicker. The vine, ever so slowly, moves up a tree trunk, twirling around the circumference, as its stranglehold becomes tighter and tighter, with the vine moving higher and higher into the tree canopy.

It’ll crawl up an evergreen just as happily as it will crawl up an oak or maple, and in time it will either strangle the tree or topple it with its weight. Poison ivy can do the same thing, but it’s not quite as tenacious as bittersweet, and poison ivy is a native plant as well, not an invasive.

You can see the damage that these vines, even English ivy, can do as you drive along highways where the tree line begins after the mowed shoulder. The vines have been ignored for decades by highway departments and the Department of Transportation, but now it’s not uncommon to see huge machines cutting down miles and miles of trees along these highways, because the vines are causing the trees to collapse and drop on the roadways.

You can see the damage that these vines can do along Sunrise Highway in Shinnecock Hills and along Montauk Highway between Tuckahoe Road and St. Andrews Road on the north side. In this spot, it’s very apparent where property owners have let the vines go rampant, and just down the street the vines are totally absent.

There is some logic here that escapes me, because had the vines along the highways, parkways and Thruway simply been cut every five or so years, all the trees could have been saved. But now, where our trees, natural carbon reducers, are seen as villains, they are simply cut down by the hundreds of thousands. Just a simple hand pruner was all it would have taken, and a bit of vision.

You can stop this from happening on your property and even in your village and town. Just cut the vines. It’s that simple. Yes, other vines will replace them, and the vines that you cut may grow back. Cut them again. And cut them again.

If you’re not averse to the herbicide glyphosate, you can be even more effective. Once you cut the vine, all you need is a small container of concentrated glyphosate (right out of the bottle) and a very small paint brush … really small. Prune the vine to about 6 inches then just paint the remaining tip with the glyphosate right from the bottle. Be careful—don’t splash and splatter. Just paint or daub the tip where you made the cut.

The herbicide will be absorbed by the stem and, more likely than not, smaller vines will be killed within weeks.

Tempted to let ivy or climbing hydrangea cover the side of your house or adorn your chimney? Don’t do it. Not only will the vines destroy the wood and masonry, the vines give easy access to vents, dormers, soffits and overhangs, where squirrels (gray, red and flying) will persistently seek small cervices or holes that they’ll enlarge. This becomes their entryway for their homes come next fall—and this can be a nightmare.

These vines also can be an invitation for raccoons to climb up the walls as they, too, look for lodging. And, unlike the gray and red squirrels, the flying squirrels are nocturnal and establish large family units … that stay up all night, and their constant pitter-patter in the attic above will drive you crazy. It can take weeks or months to get them out.

Take care of your forsythia. Prune those invasive vines, and think twice before you let or encourage English ivy, campsis (trumpet creeper) or creeping hydrangea (Hydrangea petiolaris) to grow on your structural or masonry walls.

But, by all means, keep growing!