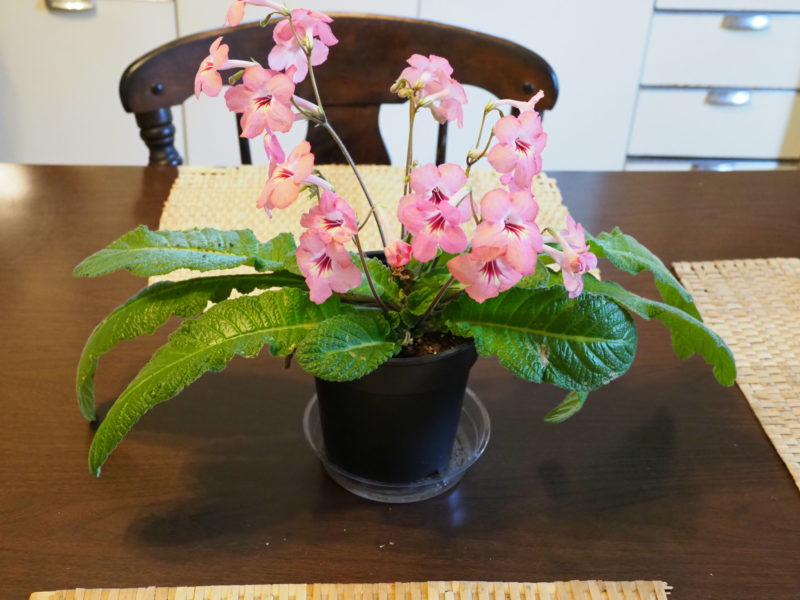 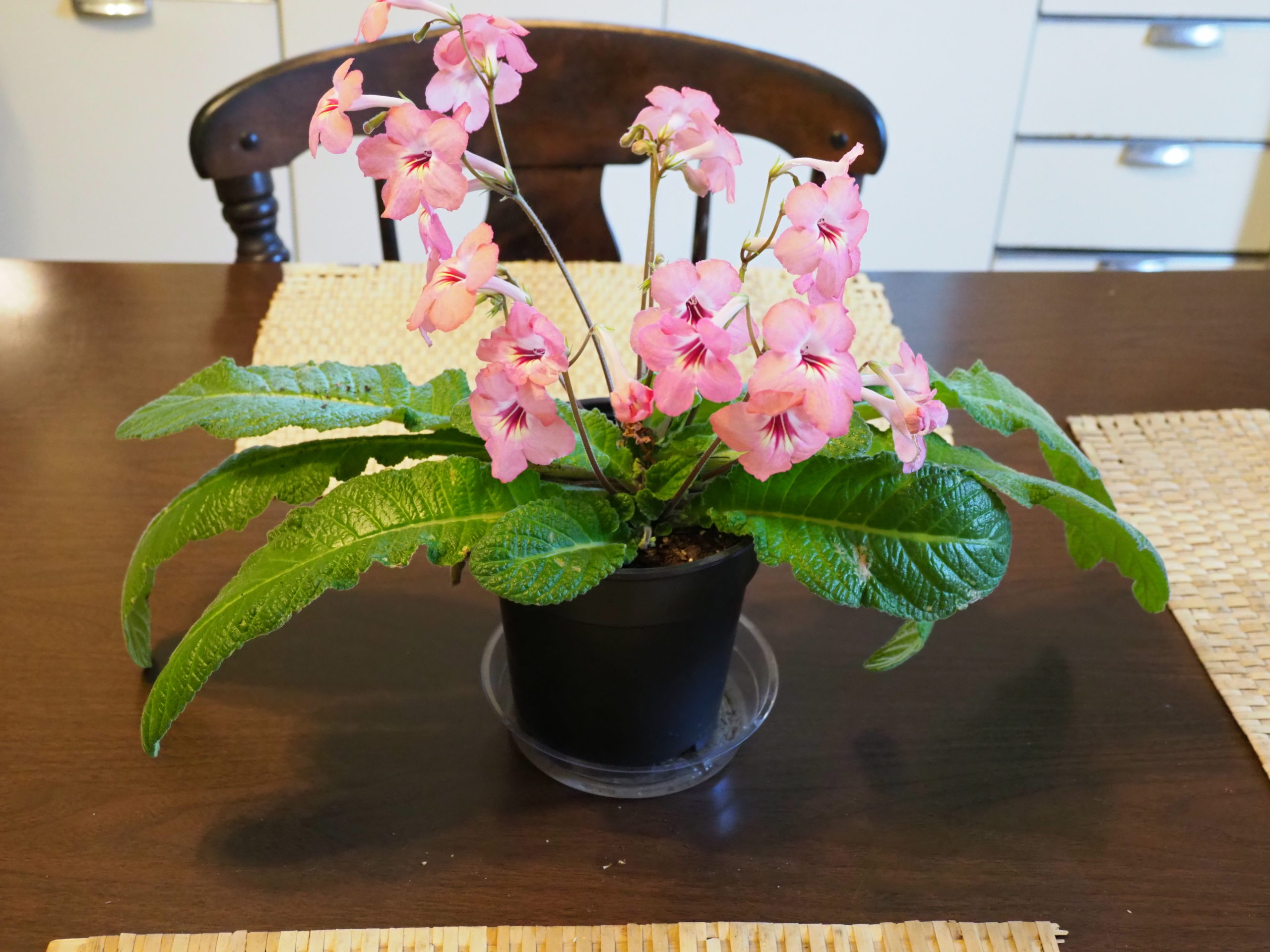 Five months from being a leaf cutting, this Streptocarpus Salmon Sunset is in a 3-inch pot and going through its first blooming cycle. Several months later, in a larger pot, this was the plant gifted to neighbor Nancy, sans fungus gnats. ANDREW MESSINGER 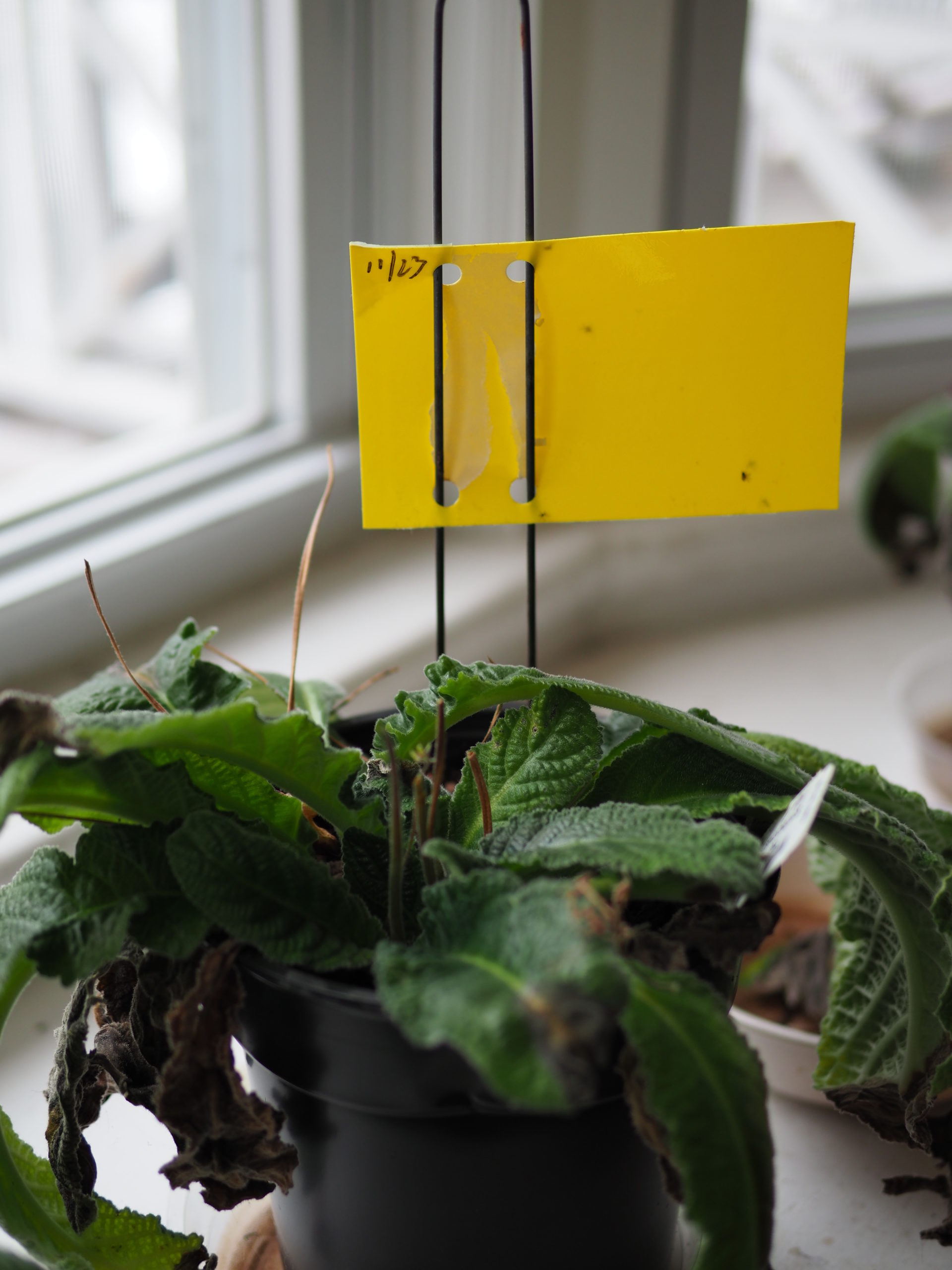 Yellow sticky cards mounted on a wire stake are set just inches above the foliage and soil to trap fungus gnats. The 3-by-5-inch cards are used to monitor and manage the gnats. A permanent marker can be used to make a circle around each gnat so new catches are only counted once. 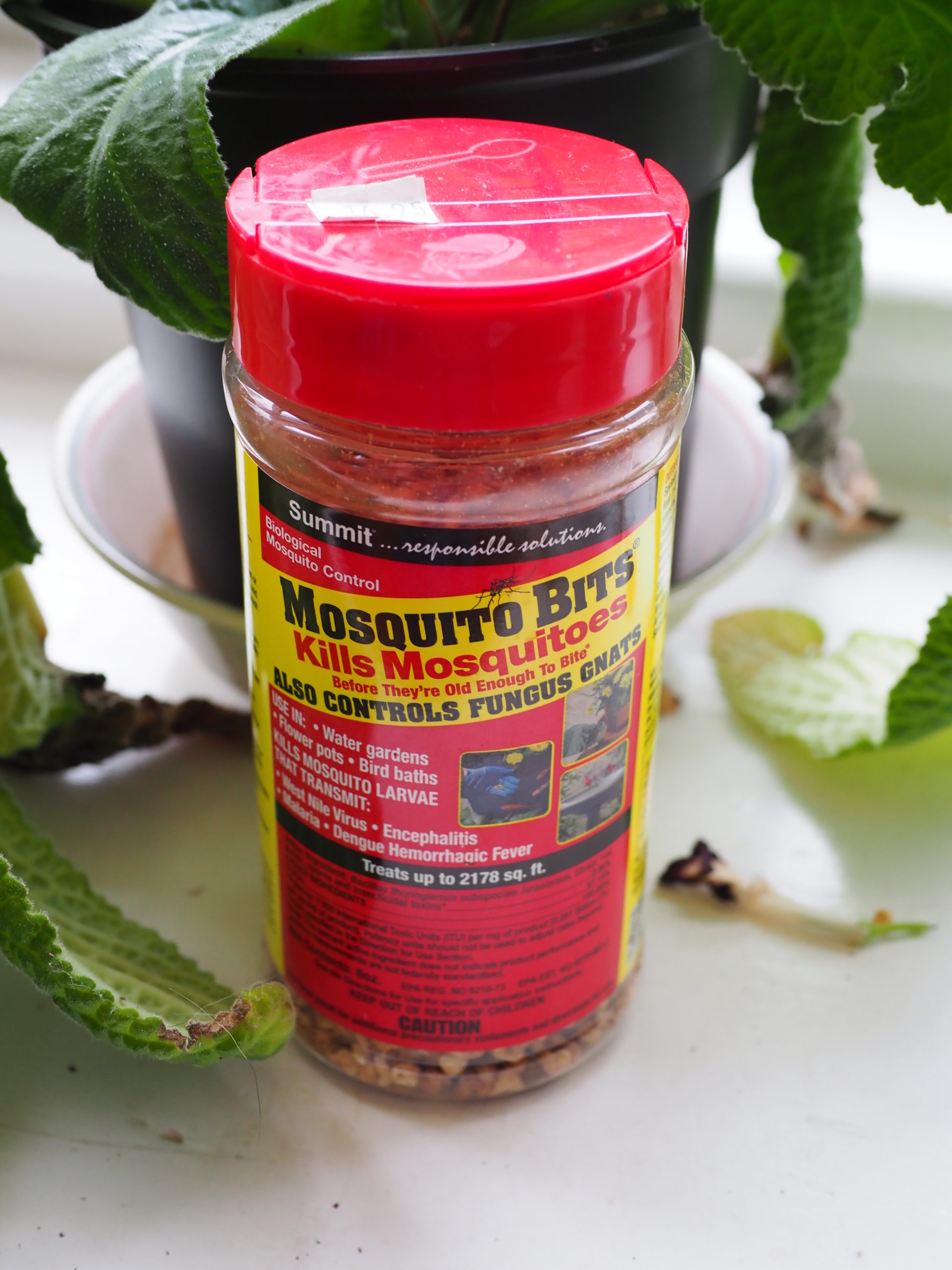 A product sold as Mosquito Bits is a Bacillus that will control fungus gnats when applied to the soil according to the label directions. Full control may take several weeks. This product is available at most garden stores. 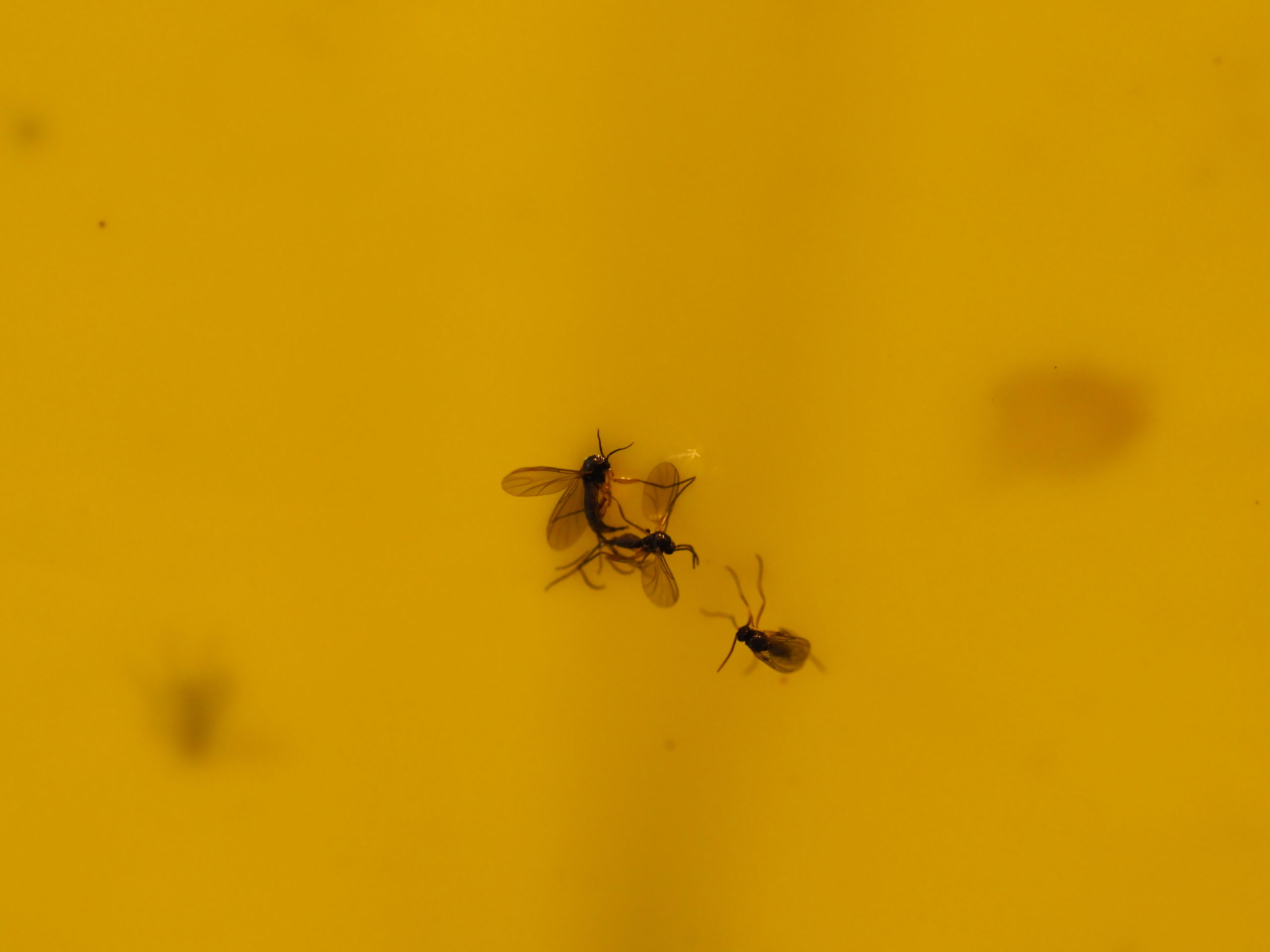 Just larger than a rye seed, here’s a group of three fungus gnats caught on a sticky trap. Remember, sticky traps won’t make the gnats go away. A trap is only used to count and manage the gnats.

I knew I was going to be away for at least two weeks so I made sure I explained that to my few houseplants and then watered them well. After all, there were only the four Streptocarpus (Cape primrose) and one large Begonia.

When I returned, the plants were still in good to fair shape, but there were these tiny gnat-like insects fluttering about the soil and crowns of the Streps. Not possible. I’ve never had bugs on my plants at our upstate home. More confusing was the fact that these little gnats were only around the Streps, not a single one on or near the Begonia.

I used to love growing Streptocarpus because the flowers can be quite remarkable and the plants like lower light and cool temps. It’s something of a great houseplant but still finicky. In my days as a houseplant peddler when I was in college, I’d pick up a carload at local growers in Bohemia and Patchogue and resell them at plant sales. These days, Streptocarpus are very hard to find, but a couple of years ago I noticed that a number of varieties were available in the Logee’s Greenhouses catalog, and I decided to start a small collection, ordering three different varieties. The small plants arrived just days later in small pots and were given homes in a north-facing bay window. Some afternoon sun, but no harsh full sunlight.

In just about a month, the plants needed to be repotted. They went from 2-inch plastic pots up to 4-inch clay pots in a peat-lite soil known as Pro-Mix. I had an ulterior motive in wanting these plants, though. I remembered how cool it was to propagate them, and when I was repotting one of the original plants one of the long sword-like leaves broke off halfway. Opportunity was knocking.

These Cape primroses have long leaves with a very thick mid-rib. When you take a 4- or 5-inch section of a leaf you can make cuts across the leaf through the mid-rib, creating leaf cuttings about 2 inches long and a half-inch wide. If these leaf sections are then laid onto a propagation mix in a pot or propagation box during the warmer months of the year, tiny new plantlets show up along the margins of the cut leaves. In four to six weeks you can have several tiny, newly rooted plants emerging, which can then be severed from the parent leaf and repotted in a new pot. Each will be an exact duplicate of the parent. Cloning at the base level.

During the summer the baby plants were bumped up in pot sizes several times, and by mid-fall, they were in full bloom in 4-inch pots. One had filled out really nicely and was covered in flowers whose lips were a rosy red with an interior white throat. I gave one of the plants to neighbor Nancy who at first was reluctant to take the gift. “I’ll kill it and you’d never forgive me,” she said. I told her she wouldn’t kill it and to just put it on the kitchen table and keep the soil moist. She did.

Months later neighbor Nancy shows up at my office door with the same plant. It had no flowers (they go through periods of flowering, not consistent flowering) and she “knew” she was killing the plant since it had stopped flowering and wanted to give it back.

It was at least four months later when I had to take the two weeks off and leave my plants to fend for themselves. No fungus gnats when I left, but fungus gnats when I returned. No, they cannot spontaneously generate. They don’t just show up from nowhere. On goes the plant detective hat, and in a short while I was able to figure out that neighbor Nancy had returned an infected plant. The gnats were probably on one of her other houseplants and just couldn’t resist the peat-based soil I’d used. My Strep had come home infested.

If you read up on fungus gnats the literature will tell you they are of little consequence and do not damage to the plants you see them around. Fortunately, I’d done some research on these gnats in the early 1980s and found that in some cases they actually can damage plants.

The females lay their eggs in moist, peat-based soils only. These are the soils that most of our houseplants are potted in, and it’s mostly what you get in bagged potting soils. The eggs develop into small white to translucent worms or maggots that feed on the organic matter in the soils. If the maggots find a wound or soft spot in the plant roots or at the crown, they will invade it, feed on the plant and cause it to deteriorate. In our case, we found the stems of some Impatiens we were working on had gotten so weak at the soil level that the stem gave way, cracked and the plant just fell over.

The good news is that the fungus gnats are easy to control and manage. We use yellow sticky traps to catch them and monitor the number of catches each day to find out if the infestation is of concern. Now again, you can read a number of “cures” for these gnats online, but there’s really only one that works and that’s a Bacillus known as Bacillus thuringiensis israelensis, also known to gardeners as Bt.

To buy the Bt for these gnats and specifically the formulation used in greenhouses and nurseries, you need to buy a 5-gallon pail costing $150. Ah, but some astute gardener realized that this formulation of Bt is the same one used in mosquito larvae control. Sure enough, you can buy a small 8-ounce container of Mosquito Bits (used in birdbaths and small ponds). Apply a small amount to the pot’s soil, water it in and it begins to kill the larvae. It does work, it takes some time and it will need a second or third application. It’s organic and will not harm humans or pets. Follow the package instructions for fungus gnat control.

One question remained unresolved, though. Why did the nearby Begonia never get the fungus gnats? Ah, so glad you asked. Remember, the fungus gnats only thrive in peat-based soils. When the Begonia was gifted to me years ago her original owner had potted it in soil from an outside garden. This is usually a real no-no. But this time, it may have saved the plant from the gnats.

Remember fungus gnats are not plant specific but soil specific. If you’ve got plants in peat-based soils, these gnats can always be a threat. Yellow sticky traps can be used effectively to monitor and reduce fungus gnat populations. If you’d like to try them, drop me a note and I’ll tell you where to get them and how to use them. Fungus gnats are smaller than fruit flies and if present will always be seen near the soil or within a few inches of the pots.

My Christmas tree guy retired this year. There was a shortage of trees last year and even the plastic ones are in short supply this year, which is reason for glee. I was able to find a nice Balsam fir the day before Thanksgiving, and it’ll sit in the barn till mid-December. Then the bottom 2 inches of the trunk get cut off, the tree brought into the living room and only then unfurled. To test your tree for freshness lift it off the ground, tap it back on the ground and see if needles fall. If lots do, it’s not fresh. As long as the tree has ample water while it’s inside it will last for several weeks. This is not the year to procrastinate on getting that tree. Keep growing

Last chance to get hoses drained and indoors. Automatic irrigation systems should be blown out and shut down for the winter. Get your driveway and walkway snow markers in place. If you have isolated trees and shrubs that deer will want to browse on, now’s to the time to fence them. Shorter shrubs can be netted while larger plants need to be fenced.

Bluestone is offering 10 percent off gift certificates. Johnny’s 2022 catalog is out. What a treasure. Not much in the way of dramatic or new offerings but there’s a smattering.

If you have veggie seeds left over from last year in unopened envelopes, put them in sealed plastic bags in the refrigerator. Most will be fine for 2022.

There are still some mowers and other gas-powered equipment with fuel valve shut-offs. Fill the gas tank with fresh fuel and a winter stabilizer. Start the engine and let it run with the valve open. After a few minutes close the valve and let the engine run until it is fuel starved and shuts down. No need to drain the fuel. The engine should start right up in the spring.

Looking ahead weatherwise, February looks to be the month to watch. Prognostications are calling for colder and wetter February than in the past seven years.