Repel Slugs And Snails While Keeping Beneficial Soil Dwellers Around 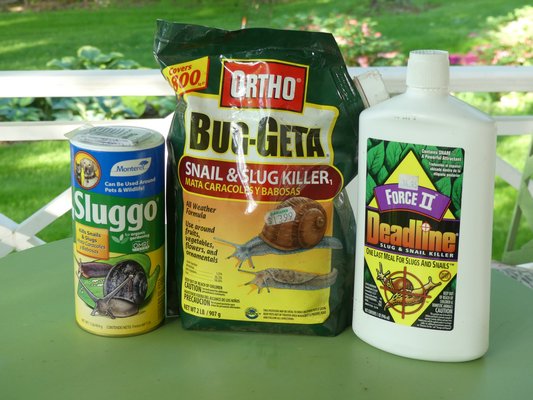 The most effective slug “eliminators” are organic-based bait pellets such as those in Sluggo that contain iron phosphide, which is acceptable in organic gardens. Bug-Geta is a chemical snail bait containing metaldehyde. This can be poisonous to children, pests and non-target pests. Deadline is also metaldehyde based but a liquid as opposed to the pellets. It has an attractant in it to draw the slugs, which ingest the poison. ANDREW MESSINGER 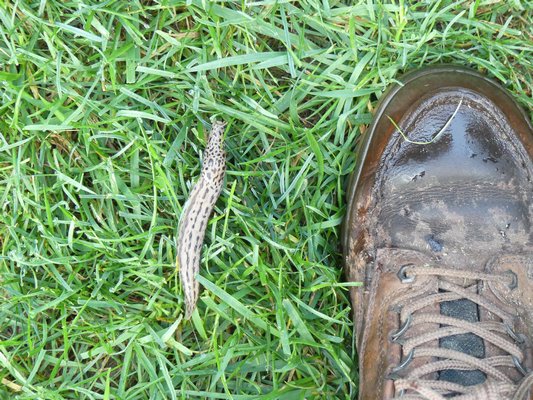 Limax maximus, or the leopard slug, saunters across a lawn just after sunrise when the dew-covered turf lets them slide a little more efficiency. This one is just about 5 inches long but they can grow up to 8 inches in this area. ANDREW MESSINGER

Protura are tiny soil-dwelling animals that little is known about other than the fact that they are an important part of organic decomposition and absolutely beneficial to our soil web. COURTESY HALVARD/GFDL 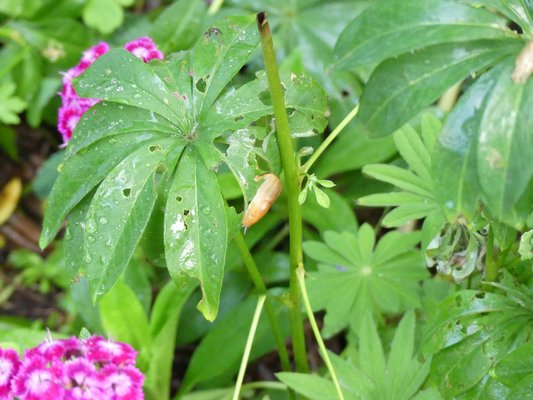 The slug on this lupine leaf is devouring an entire leaf section and the holes in the other leaves show earlier feeding areas. Droppings (top leaf section) are also a telltale sign that the slimies have been around. ANDREW MESSINGER

If you’re the type of gardener who actually gets out into the garden and gets your hands dirty, you have probably noticed—especially this wet spring—that there are a number of things moving around in the soil, just at or below the surface, that seem to be doing something. Ah, but what? And what purpose do these tiny to nearly inconspicuous animals do? Are they helpful? Harmful?

Well, most will agree that two of these soil residents are gross and can qualify as pests, and yet our garden snails and slugs still play an important role in our gardens in spite of the fact that we do our best to chase them, repel them and kill them. We’ll deal with these shortly.

But smaller and usually less obvious are the sowbugs, pillbugs, proturas and collembola. None of these are true insects, but less enlightened gardeners have treated them as such for eternity and sought to kill them simply assuming that they were bad. Quite to the contrary, they are critical to what we refer to as our soil web and they should simply be left alone, but understood.

Everyone knows what sowbugs and pillbugs look like. They are usually gray in color and about a quarter of an inch long. When disturbed, they will often roll up into balls until they sense the danger is gone and then they unfurl and go back to work. But what is their work? Simply put, they are micro-composters. They feed on decaying organic matter from twigs to leaves to fallen flowers and fruit and hasten the breakdown cycle that turns once-living plant matter back into the soil as further broken down, or digested, plant material. They don’t bite, scratch or sting. They don’t carry plant-infecting diseases like some true insects and the last thing they want to do is bother you. Yes, they do get into homes and other structures, but all they’re doing is looking for moist sources of decaying wood or other organic matter. In these cases, they can easily be deterred with some diatomaceous earth—available at most garden centers—but there is no reason or excuse to use insecticides on them.

Even smaller and less conspicuous than sowbugs and pillbugs are the protura and collembola. These two are also non-insect soil dwellers. They’re just barely visible, though you may have noticed collembola before and known them as springtails. Don’t panic! Neither of these bite or sting and, just as the previous two, these animals also play an important role in the decomposition of decaying organic matter.

The secret life of the protura is just that, secret. But we do know they don’t have antenna or eyes. They can often be found in the soil surface of houseplants that are potted with peat-based potting soils, as they scurry about in the tiny spaces between the soil particles.

Collembola, or springtails, get their common name from a small appendage called a furcula on their abdomens that’s held under tension. When the bug senses danger, it releases this “spring,” and off it goes. While this bug serves a function much like the others described above, it has a much wider diet and seems to prefer vegetable matter to other sources of plant material. I’ve often found them on the ground around fallen tomatoes that have started to rot or are cracked. But there are also some notes that they may also feed or graze on molds and mildews, so there is a potential for them to be distributors of these, though there is no direct evidence. Again, we consider them “garden beneficials”—until and unless otherwise proven.

And then there are what I refer to as the slimies: the slugs and snails. They are both often thrown into the large category of “insects” when it comes to our gardens, but they are not even related to insects. Both are mollusks and are related to squid and octopus—but obviously the snails have protective shells while the slugs don’t. Both function in our gardens as degraders of organic material, but unlike the collembola and protura, these two mollusks are somewhat terrestrial and are destructive in our gardens, because they are fairly nonselective of what they feed on.

Slugs and snails can be controlled with the same materials and methods. For most of us, slugs are a much greater problem than snails. However, when snails show up they can spread through a neighborhood in a matter of years, so if and when they do show up get them under control quickly. They’re not quite as destructive as slugs because they are generally smaller and don’t generally climb as high on plants as the slugs do. And unlike snails, slugs can do damage not only to foliage but to roots and underground plant parts as well.

We discovered quite by accident that a great organic control for both these slimies is ducks. We raised a family of ducklings at our Shinnecock Hills home years ago when their mom was hit by a car on Sunrise Highway. We didn’t have a single snail or slug that summer—just other duck-related issues. Friends who raise chickens also tell me they are great slug eaters. And if you haven’t noticed, slugs just adore cool wet springs that turn into hot and humid summers. Take note and take action.

One of the telltale signs of slug presence is their slime trails. Neither a solid or liquid, this slime is referred to as a liquid crystal. It assists them in locomotion and in fighting off bacteria and fungi, and allows other slugs to follow the slimy trail to a mate. Slugs are rarely found in full sunlight and tend to retreat to the shade or under mulches, stones and pavers during the heat of the day. Gardeners are often confused by their damage and their chewing can often be written off to caterpillars and beetles. But unlike these two chewers who feed on leaf margins, the slugs are unique in that they are one of our few garden pests that can begin in the center of a leaf, chew or digest a hole and move outward toward the leaf margin.

The key to slug control is early detection and persistence. There are both organic and chemical controls. The most interesting is the use of beer. Many gardeners will sink an aluminum pie plate so it’s level with the ground and fill it with beer. The brand and style of beer doesn’t seem to matter. At night the slugs come to the slug bar to drink and they ultimately drown. Empty the pie plate and repeat. As a repellent, you can use diatomaceous earth, ashes and coffee grounds laid out in rows that the slugs won’t pass over. These all need to be replaced after rain though. Copper strips can also be used as the electrochemical reaction between the slug and the copper repels the slugs and again, they won’t cross the line.

There are also slug baits that come in both organic and chemical forms. The organic baits are mostly made from iron phosphide, which slugs ingest, poisoning them. This material is approved for use in organic gardens and, while effective, it may not be as effective or as lasting as chemical baits. Deadline, a liquid, and Bug-Getta (an obvious misnomer) contain chemicals that the slugs ingest and it causes them to totally relax, making them unable to move. The sun then ultimately dries them up. The chemical baits containing metaldehyde can be an issue if you have pets and young children and it can be toxic to birds, so keep that in mind.

Garden sanitation and monitoring can also help with slug control. Look under pavers, stones and garden bricks for signs of slug eggs. The eggs appear as small masses of gelatinous spheres with black dots in clusters. Simply exposing them to sunlight for an hour or so can kill them or just collect them and put them in the trash.

Not much fun, but let the slimies get the best of your garden and they’ll not only leave a holey mess but they’ll return year after year after year. Keep growing.

It’s been cold enough during the past couple of weeks to take garden and garden ... 11 Nov 2019 by Andrew Messinger
Sign in to comment