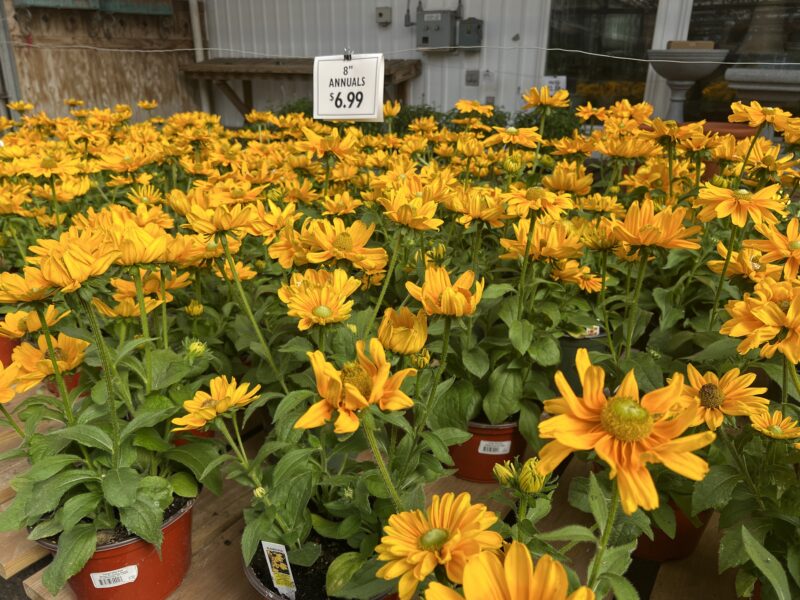 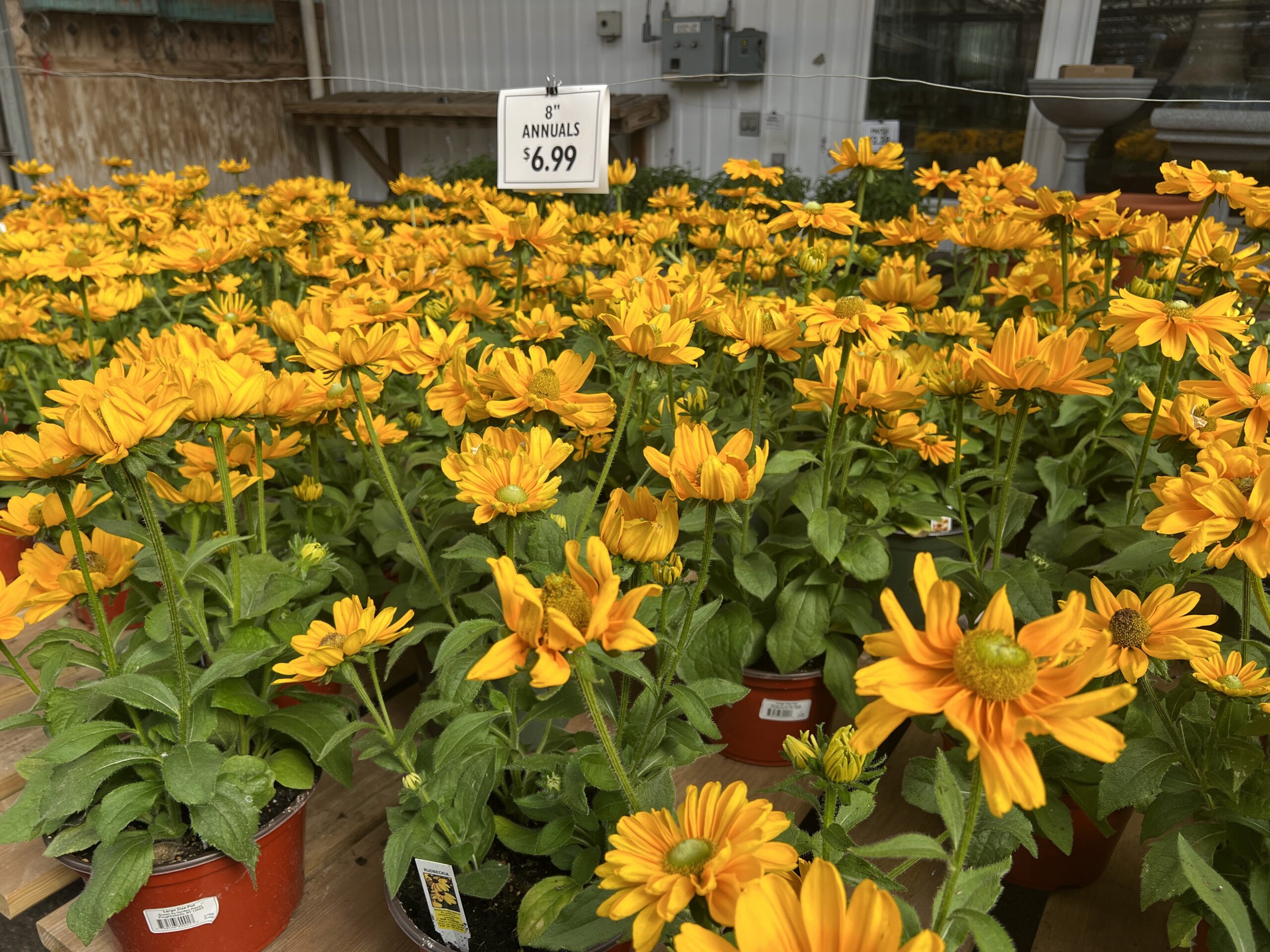 Annual type Rudbeckias for sale at a mass marketer. These may drop seed but you never know what will result. If they come back next year they’d be considered hardy annuals. ANDREW MESSINGER 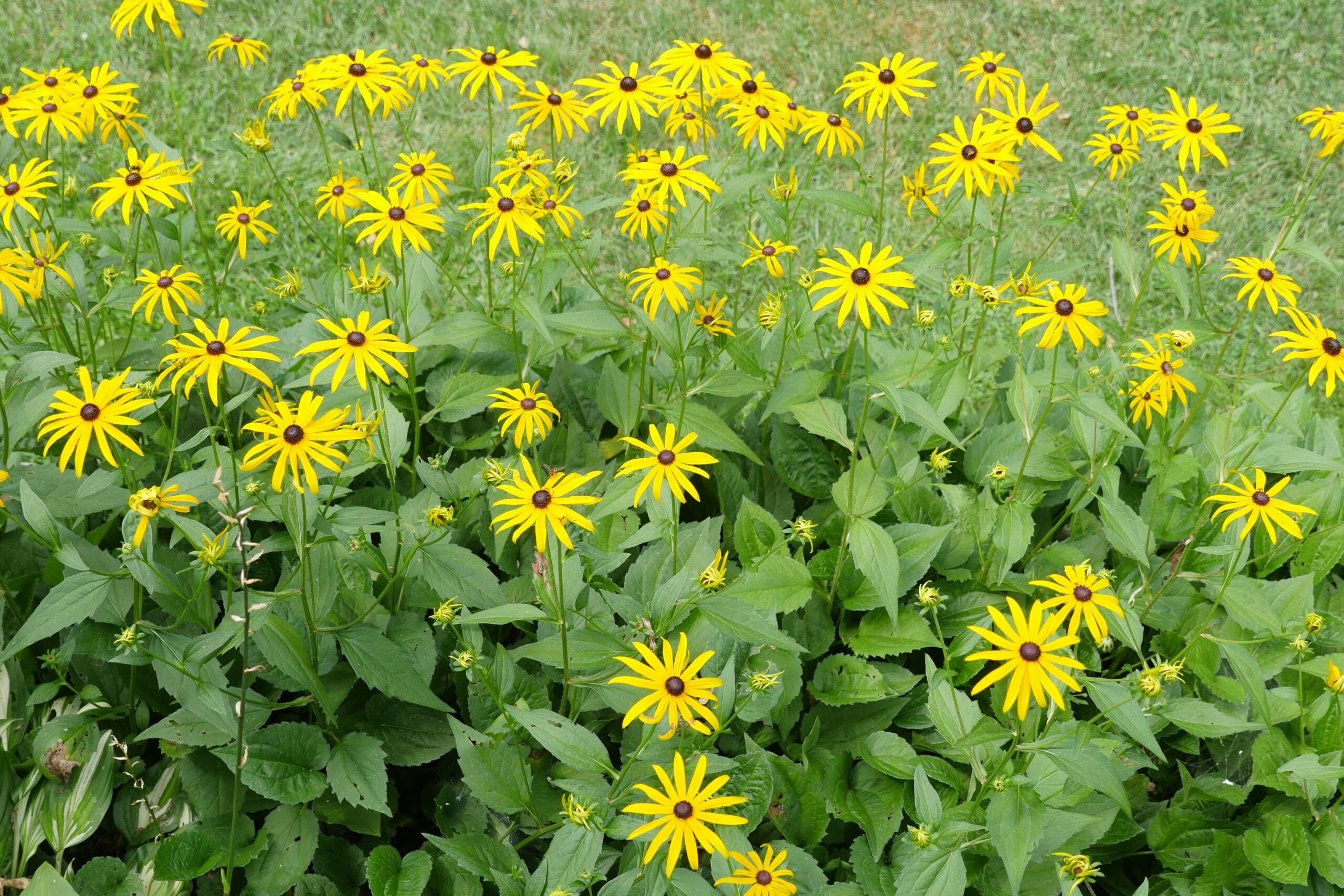 This is R. fulgida Goldsturm grown from divisions, not seed. Note how uniform the flower heights are as well as the height of the foliage. This is the uniformity that some designers seek when using this variety. ANDREW MESSINGER 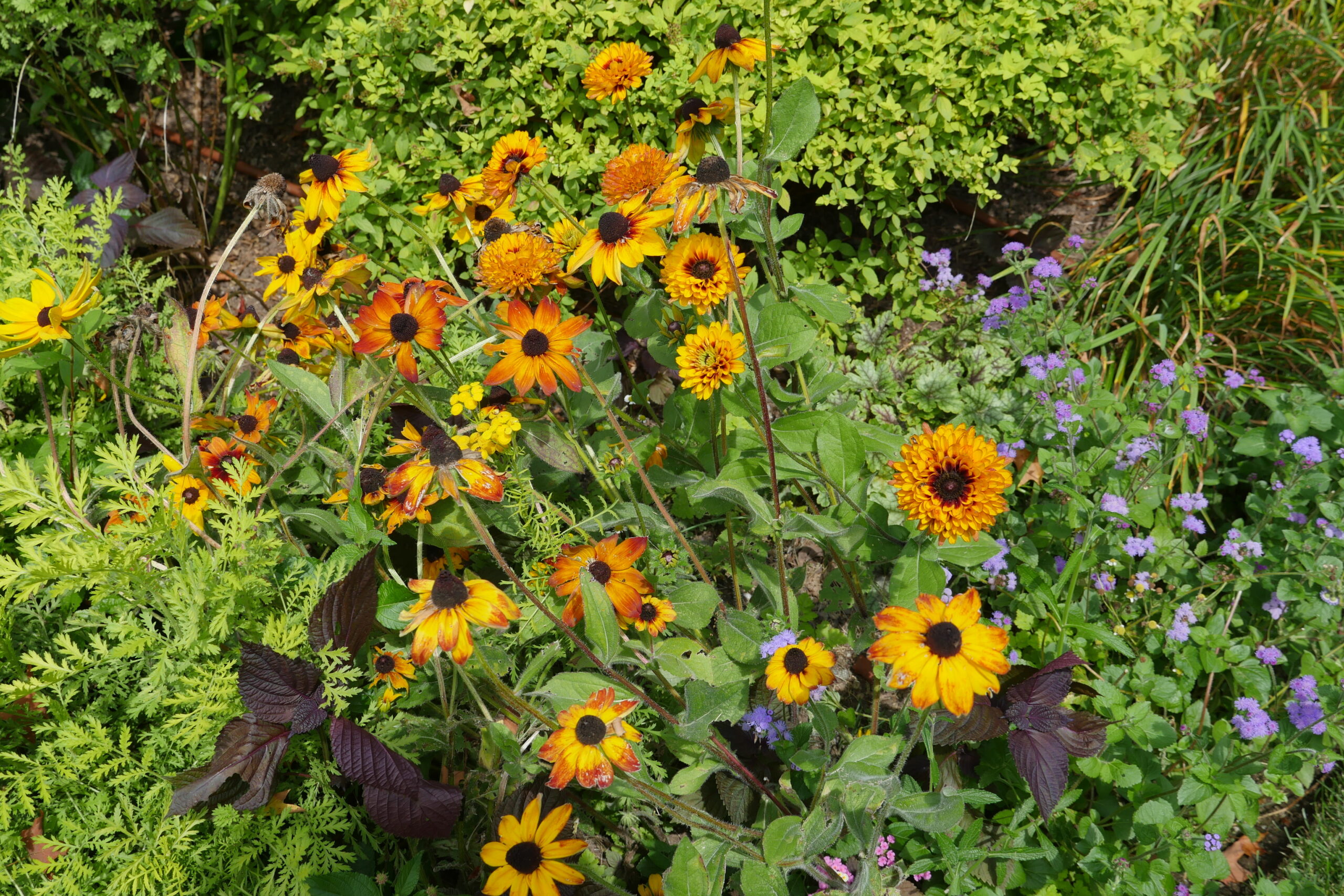 Rudbeckias grown from a seed mix resulted in various flower styles, some looking like multi-colored zinnias. The singles are more likely to return the following year either from dropped seed or plants. The doubles and triples are not as reliable repeaters. ANDREW MESSINGER 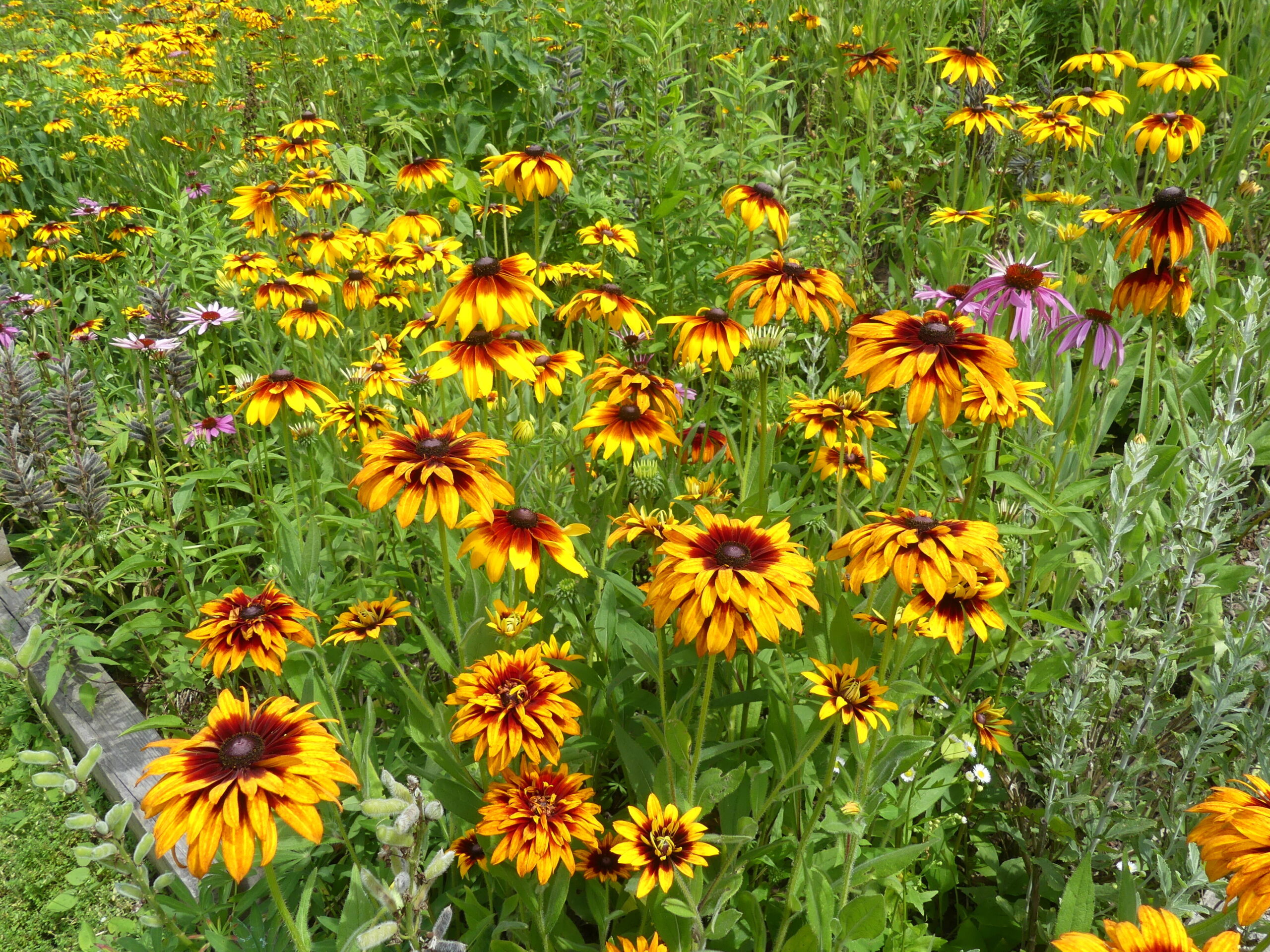 A small area of a long seeded "wildflower" border. At this time of the year it’s dominated by the Rudbeckias but also note the Echinacea and the seed pods left by the Lupine perenne (left center in brown and bottom left green). ANDREW MESSINGER 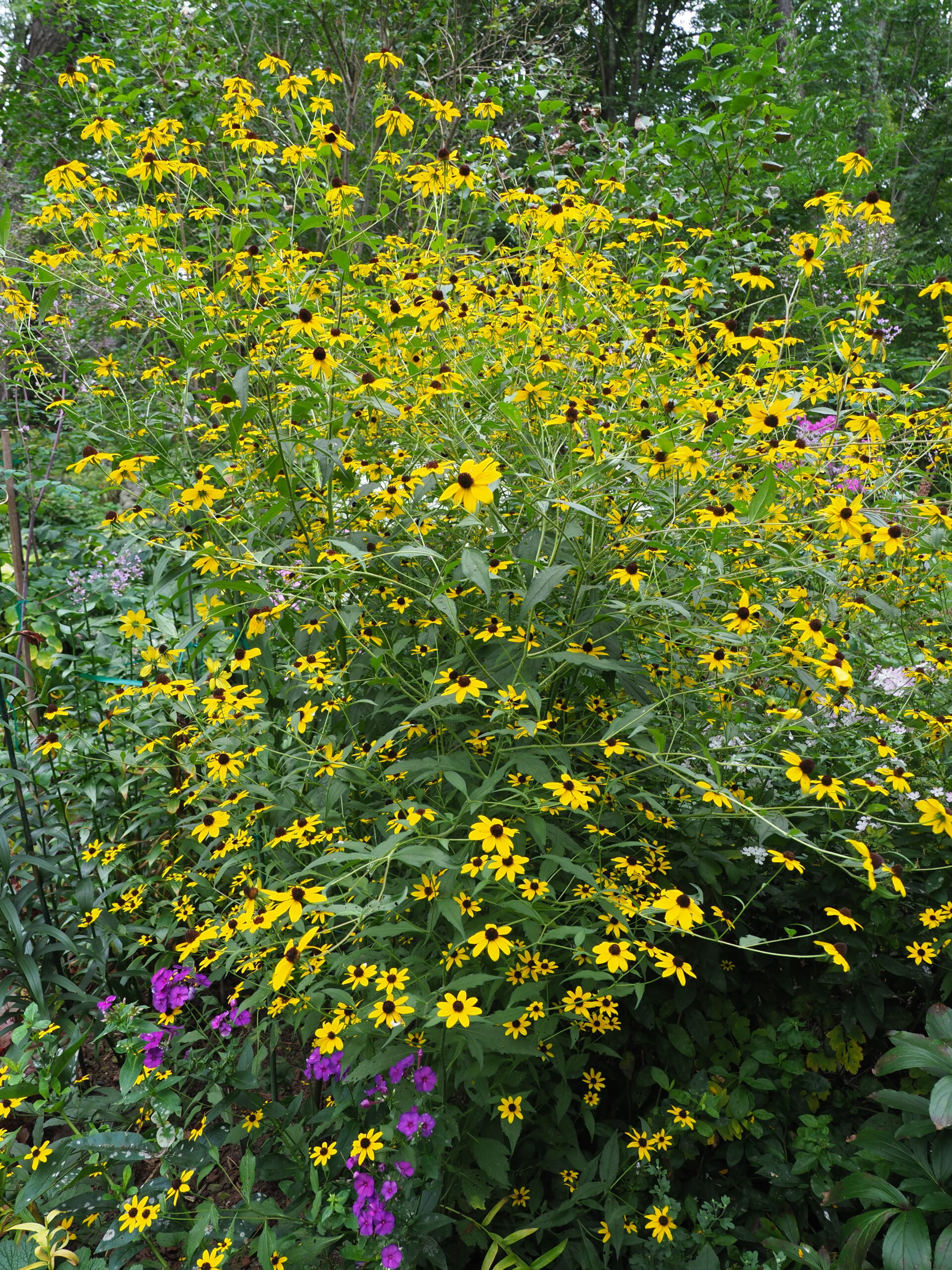 Some literature says that Rudbeckia triloba grows 4 to 5 feet tall. Here it’s about 8 to 9 feet tall in September. As the seeds in the brown buttons ripen, the goldfinches will descend on the plants to feast. Due to the birds' yellow colors it’s often difficult to notice them until they fly off. ANDREW MESSINGER

When I began to think about this series of columns on Rudbeckias I was fairly focused on one particular group of plants in the family that we simply call the black-eyed Susans. While there are actually dozens of Rudbeckias that occur in the wild and in our gardens, it’s usually this traditional one that is the first to come to mind.

For the most part, the black-eyed Susans are found in the species R. hirta, and this is the one we see along the roadsides and the variety most used as the basis for the initial breeding steps, even when we get down to the garden dwarf varieties such as Goldilocks. But I was in for a stunning surprise one morning while walking my dog up a rough country road.

I’d passed this spot dozens of times before, but either we always walked on the opposite side of the road or I hadn’t been paying attention because this time as I looked to my left where the dog was pulling me and there was a plant that threw me. It sure looked like a black-eyed Susan and had all the characteristics of this Rudbeckia with pointed leaves, a hairy stalk and orangey-yellow flowers with the classic rays and the characteristic brown disc center. The problem I was having, though, was that this plant was about 7 feet tall and perfectly erect.

When I got back home I hit the books and sure enough there it was, Rudbeckia triloba, also known as the three-lobed coneflower or brown-eyed Susan. This is a great example of the dangers of using common names since we consider the Echinacea as coneflowers and not the Rudbeckias. Echinaceas have a somewhat cone-shaped center disk while the Rudbeckias have a more flattened but rounded disk.

R. triloba is reported to have a natural height of less than 4 feet, but I think this one was a bit taller as it was growing in some shade. It’s found in the wild from Connecticut west to Michigan and several mail-order nurseries sell it — and what a wonderful find for the back of the border or even as a specimen plant once it matures. My plants, however, range in height from 5 feet to 8 feet tall, and yes, they are R. triloba.

But when you look at most of the gardens out here that have Rudbeckias planted in them, you’re most likely to find a black-eyed Susan that I briefly touched on last week. This is Rudbeckia fulgida Goldsturm. This variety has a very interesting history and was the Perennial Plant of the Year in 1999. The three important characteristics of this variety are its uniform height (from vegetative stock not seed stock), uniform color and the fact that it spreads to form a mass of stems and flowers through underground stolons and yet it’s never invasive. True Goldsturm plants can’t be grown from seed, and if you see seeds that claim to be this variety, they’re not. Only vegetatively grown plants give the important growing characteristics that designers and gardeners like about this variety uniformity.

You can buy seed for the species Rudbeckia fulgida, but when planted in the garden the seeded varieties can be quite variable in their height and spread, and are much less desirable. Even within the species there are about 10 subspecies with other characteristics, but again, only the true Goldsturm has the predictable color and form that a formal planting can demand.

Rudbeckia seed can be easy to start, but it’s not always reliable. So if you do collect or buy some seed it’s always a good idea to do a spring and late summer sowing. This makes this species perfect for pollinator gardens and meadow plantings. Often a sowing at this time of the year can result in flowering plants the following summer, but spring sowings won’t usually flower until the second year of growth.

If you’re looking for a stunner to start from seed, check out the Hudson Valley Seed Company’s offering of Campfire Rudbeckia. Found on a Maine farm, this Rudbeckia has traditional yellow rays but each ray turns to a darker and darker brown as it nears the button, making for a striking flower both as a cut and in the garden. You can find more here: bit.ly/3IZUWH9.

Jellito seed offers at least 25 varieties of the perennial types, and Park Seed offers Prairie Sun, which has a green center disk instead of brown but still with the yellow rays. Johnny’s Seeds offers the very attractive Cherokee Sunset mix as well as the dark rayed Cherry Brandy.

In the spring, start Rudbeckia seeds (annual, biennial and perennial types) indoors about six to eight weeks before the last frost date; so out here we’re looking at about mid-March. You can also sow some seed outdoors now in situ and they will either germinate and overwinter as small plants (keep the rabbits away) or they will germinate in the spring.

Thoroughly moisten sterile, seed-starting mix then fill your flats, trays or pots to within a quarter inch of the top of the container. Put several seeds in each cell or small pot or scatter them over the flat then press seeds gently into the surface but do not bury them. These seeds need light to germinate and if they get covered nothing will happen. If you want to do a second batch of seeds, perennial varieties started indoors may improve if placed in a cold area or the refrigerator for four weeks after planting the seeds, then moving them back into the warmer temperatures. But in the fridge they should be in plastic bags so the media doesn’t dry out.

Otherwise, place in a warm location until seeds begin to grow in about five to 14 days. A room temperature of 70 to 72 degrees Fahrenheit is ideal for starting these seeds. After seedlings appear, move the container to a bright, sunny window or place under plant lights. When seedlings have a couple sets of leaves, thin to the strongest plant by pinching or cutting excess seedlings at the soil line.

Before transplanting the tender seedlings into the garden, they need to be hardened-off, allowing them to adjust to the outdoor conditions. Place seedlings outdoors in a shaded or protected location for short periods of time, about four hours per day to start. Each day, leave plants outdoors for a couple hours longer and gradually move into brighter light conditions. Check the soil often to make sure it’s moist, and water if necessary. After 10 to 14 days, plant in the garden.

Black-eyed Susans are easy to start directly in the garden, especially in mid to late August, generally when daytime temperatures are above 60 degrees. Prepare the planting bed by raking it smooth then scatter the seed so there is about one seed per square inch. Again, don’t cover the seed but use a board or block of wood to press the seed against the soil. Keep the soil moist, and germination can take place in a week or two. But any seed that doesn’t germinate will probably sprout next spring. When the seedlings are about the size of a quarter they can be transplanted and spaced, or thin them. Any unused seed should be put in an airtight container and stored in the refrigerator until next year.

I’ve never had an insect problem with these plants, and for the most part they are disease free as well. Sometimes the foliage of the glossier-leaved varieties can get some spotting, but it’s never fatal and not really unsightly. In areas where they don’t get enough air flow or where it’s constantly humid they can get some mildew. Powdery mildew isn’t too serious but the plants are also susceptible to downy mildew. Downy mildew shows up as a gray cast on the undersides of the foliage. Overhead watering or irrigation will exacerbate this.

When used for cutting, the flowers on the long wiry stems should be cut early in the day, before the sun hits the plants. This will keep the stems stiff (turgid) as long as they immediately go into cold water.

I’ve been able to find nearly 60 cultivated varieties of Rudbeckias on the internet, though not all are black or brown eyed, and there are at least a dozen wild species that can also be added to your garden so there’s lots of opportunity here to help you expand your repertoire — and keep growing.