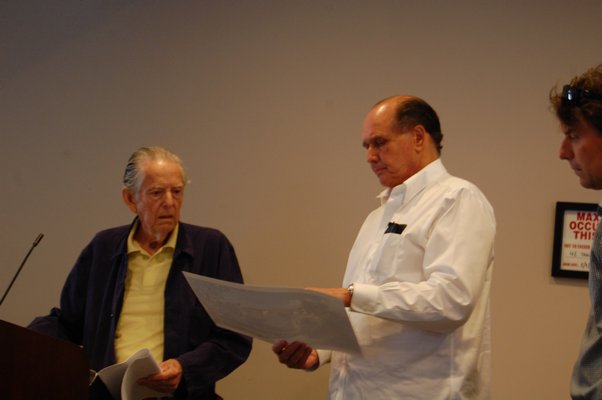 Garden centers carry several varieties of lavender in pots, from quart-sized like these up to gallon-sized. ANDREW MESSINGER

Contrary to one of his early hits, everybody does not love Billy Joel now. Or at least not the two buildings he owns on Bay Street.

Mr. Joel’s two-structure residence was once again in front of the Sag Harbor Village Architectural Review Board on Thursday night, July 26, for approval to renovate the structures. Mr. Joel, who was in attendance at the meeting, has been trying to renovate the home since 2016 with the intent to combine the two structures into one. He originally hoped to raise the structure facing Rector Street to a height of 34 feet and rotate that same structure to face Sag Harbor Bay, but both the ARB and the Village Zoning Board of Appeals shot those elements down in 2017. At the ARB’s meeting on April 26 this year, attorney Jon Tarbet and builder Jeffrey Collé said the house will be raised only to a little over 29 feet and have a two-story addition connecting the two buildings moved farther back from the street.

On Thursday, Mr. Tarbet expressed “optimism” in the ARB’s review of the plans for the structure and pointed out improvements to the structure’s windows as recommended from his last appearance in front of the board. Speaking over the phone on Friday, Mr. Tarbet said the original designs for the windows would be similar to a style used in the 1800s but were disliked by the ARB at its April meeting. He also pointed out the structure’s screened-in porch that would face Bay Street has been reduced in size.

Though he first expressed liking the new plans, board member Dean Gomolka pointed out a large elm tree on the property situated at the corner of Bay Street and Rector Street that could suffer damage from the proposed renovations. Zachary Studenroth, a consultant for the ARB, also had concerns about a brick facade that runs up the middle of the structure, essentially having a large brick wall in the house. Mr. Tarbet said on Friday that while the tree is not technically on Mr. Joel’s property, the board seemed to want to protect the tree from any damage. Therefore Mr. Tarbet said that he and Mr. Collé could look into ways of protecting the tree during renovation work. As for the brick facade, Mr. Tarbet said that the renovators would add some “aesthetic details” to break-up the wall.

ARB Chairman Anthony Brandt brought the discussion back to one of the major concerns.

“The issue is going to be the streetscape by raising the building,” Mr. Brandt said. “I don’t know what you’d do about that.”

Someone equally concerned about the height was Paul Davis, a resident of Rector Street who lives behind Mr. Joel’s residence.

“There was no drawing that we could find that shows the elevation from the point of view of our house,” Mr. Davis said. “There’s also the historical aspect of this. There’s only a whisper of the old building from what I can see. What this is looks like any other place.”

The board made a motion to table the discussion until a public hearing on August 23. Until then, Mr. Tarbet said that he and the renovators will work on plans to address the tree and the brick facade.

After a few years off, Guild Hall of East Hampton has brought back its annual ... 22 Jun 2021 by Staff Writer

Of all the rooms in a fine Hamptons home, or any home, really, a kitchen ... by Oliver Peterson

Martha Stewart led a discussion about the work of renowned architect Grosvenor Atterbury with New ... by Staff Writer

Paul Wagner of Greener Pastures Organics will present “Going Organic — Roses in Your Garden” at Peconic Land Trust’s Bridge Gardens on Tuesday, June 29, at 3 p.m. Mr. Wagner will lead a walk through the large rose garden at Bridge Gardens and share techniques for organic rose care. He has been working with Rick Bogusch, the Bridge Gardens garden director, to make organic applications to keep the roses looking their best on even hot and humid days. Admission is $5 per person and reservations are required. Call 631-283-3195 extension 17 and leave your name and call-back number, or email ... by Staff Writer

Six private gardens around Sag Harbor Village will be open to the public for the ... 14 Jun 2021 by Staff Writer

Staking and tying plants in the garden seems particularly relevant this year because most of ... by Andrew Messinger

Entomologist Doug Tallamy of the University of Delaware will present “Nature’s Best Hope,” his talk ... 8 Jun 2021 by Brendan J. O’Reilly