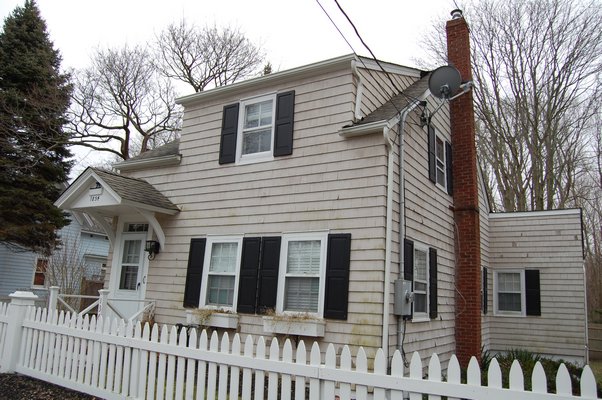 The 'half house" located on Jermain Avenue in Sag Harbor. JON WINKLER

After nearly a year of back-and-forth between homeowner and review board, the “half house” of Sag Harbor is now allowed to expand.

The two-story, three-bay frame house located at 136 Jermain Avenue has been in dispute in front of the Sag Harbor Village Board of Historic Preservation & Architectural Review (ARB) since May of last year after its owner, Julian Ellison, made repeated submissions for a certificate of appropriateness to renovate the house. Mr. Ellison was denied five times in a span of four months, causing him and his attorney, Alex Kriegsman, to file a lawsuit against the board, along with the village board of trustees in Suffolk County Supreme Court. After the court issued an Order to Show Cause on December 1, Mr. Kriegsman announced that the lawsuit has been settled and Mr. Ellison was awarded a certificate of appropriateness for his renovation plans.

“It is unfortunate that a suit was necessary to achieve this result,” Mr. Kriegsman said in the email announcement of the settlement. “I hope in the future the ARB will be more mindful of New York State law and the Village Code.”

In accordance with the settlement, Mr. Ellison will also be issued a building permit by the Village Building Department as long as his renovation plans are approved by the Suffolk County Health Department and the Building Department. The renovation will have to adhere to revised plans submitted to the ARB at the September 8 meeting. With that, the settlement also states that the issue of the lawsuit is “discontinued and dismissed with prejudice.”

“The case is settled, so we’re done with it,” he said this week. “They have to build on the agreed upon design. If they don’t, they’ll have to approach the building inspector.”

Mr. Brandt went on to explain that the main issue that he and the ARB found with Mr. Ellison’s plans was that the addition Mr. Ellison wants to build onto the house was too large for both the house itself and the historical aesthetic of the neighborhood. According to Anne Sherry, the architect of the renovations, the size of the addition fell under the new village zoning code. However, Mr. Brandt said the ARB still can have a say in the issue, noting that it is written into village code that the ARB can issue a final determination if the board finds a house, or in this case an addition, out of scale. While Mr. Brandt said that the ARB is no stranger to lengthy discussion on properties, this case was unique among others.

“This isn’t uncommon at all, but it is uncommon for us to be sued,” he said. “We finally scaled the project down where we thought the addition was appropriate.”

When the mood strikes, Judi Desiderio hops on her bike and cycles down Gerard Drive ... 6 May 2020 by Michelle Trauring
Sign in to comment