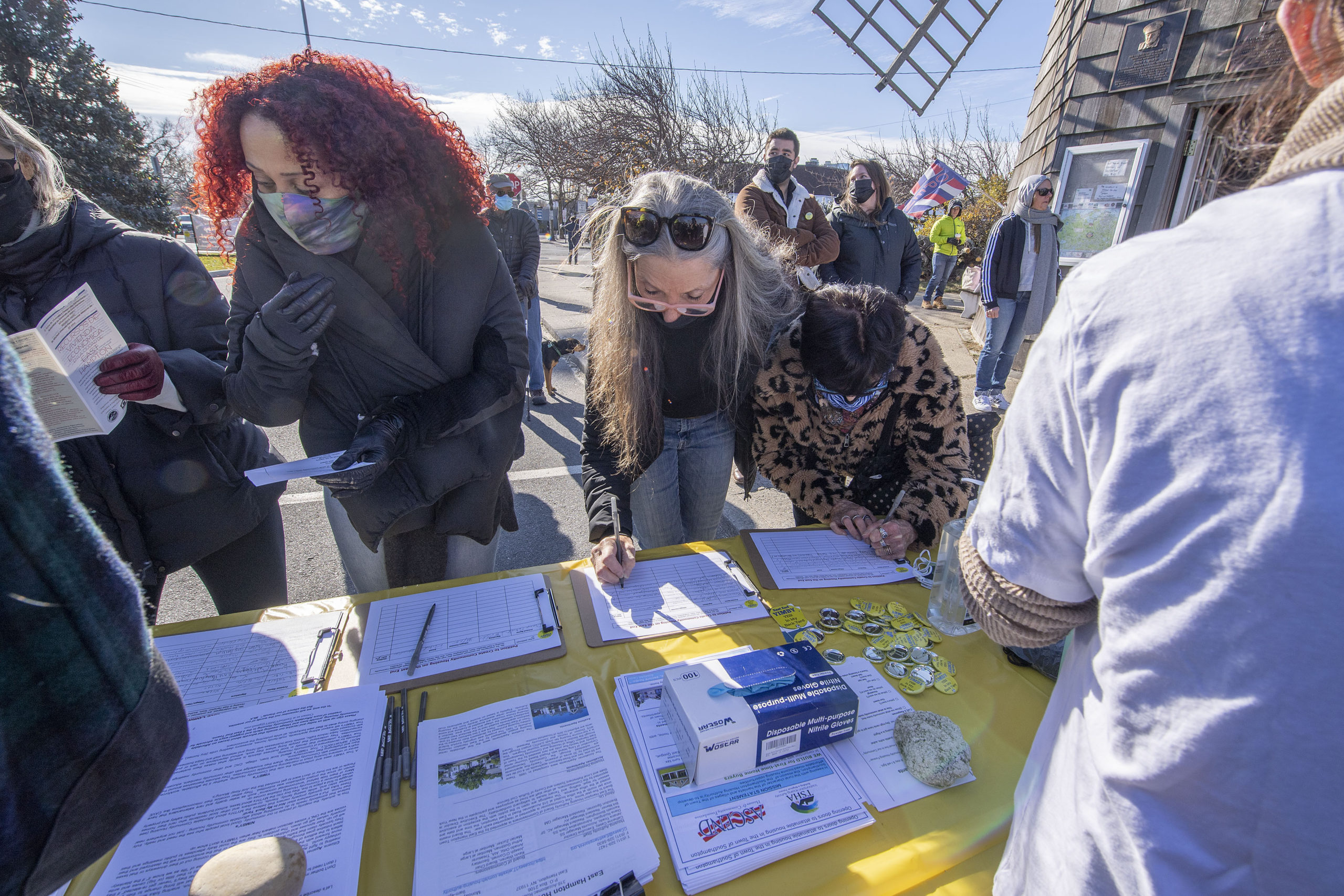 Attendees sign petitions at the East End YIMBY Rally for Affordable Housing, at the windmill on Long Wharf in Sag Harbor on Saturday. MICHAEL HELLER 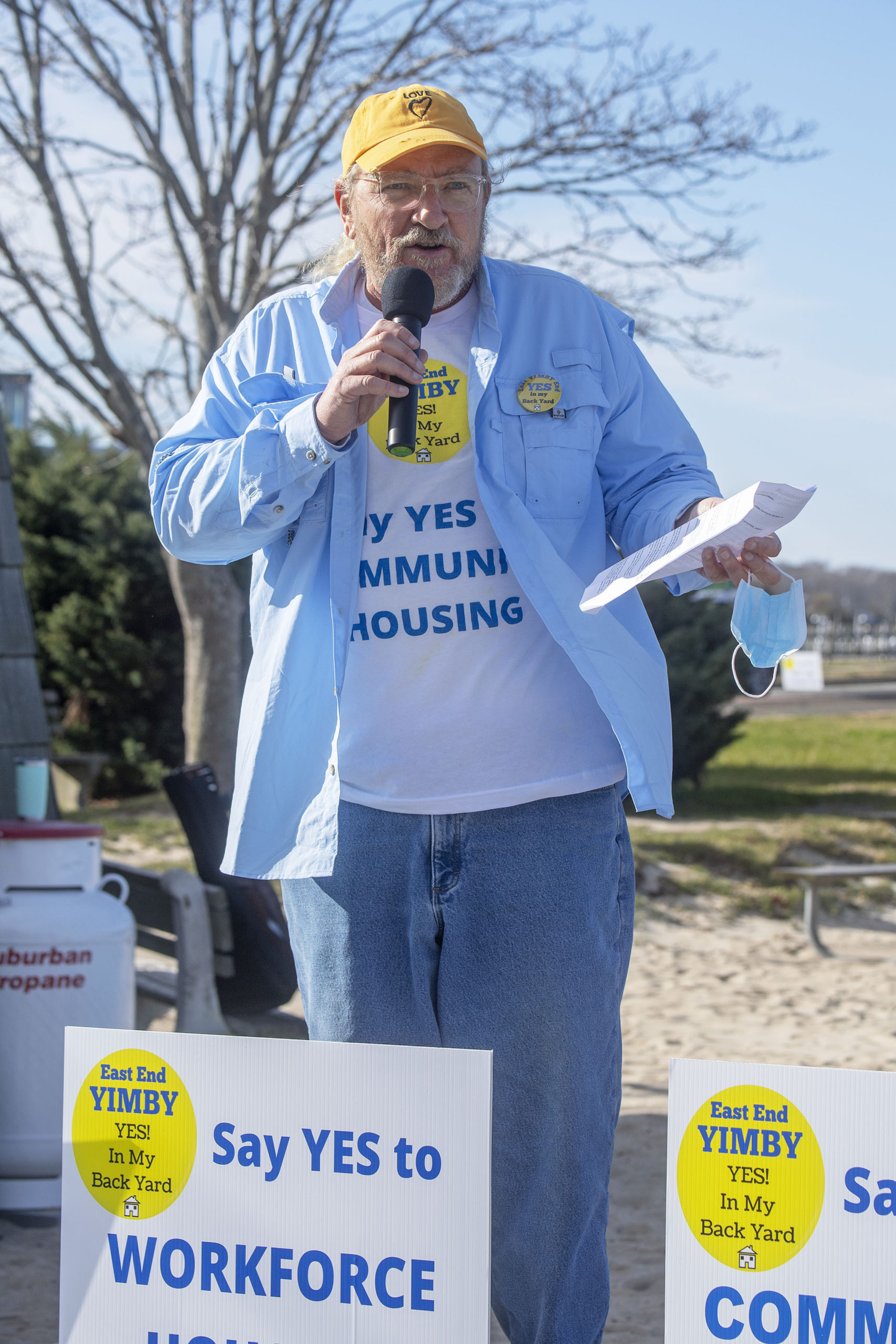 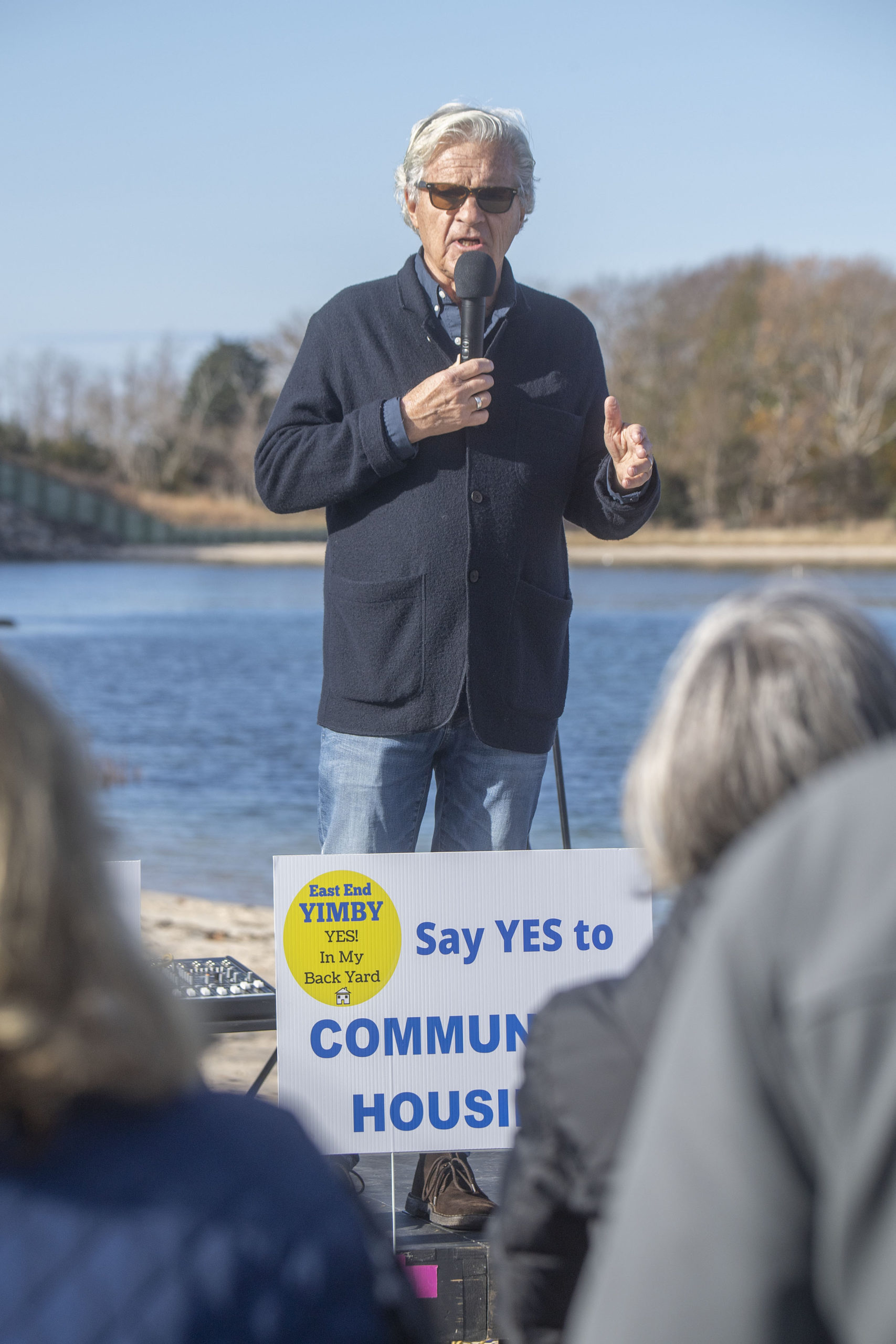 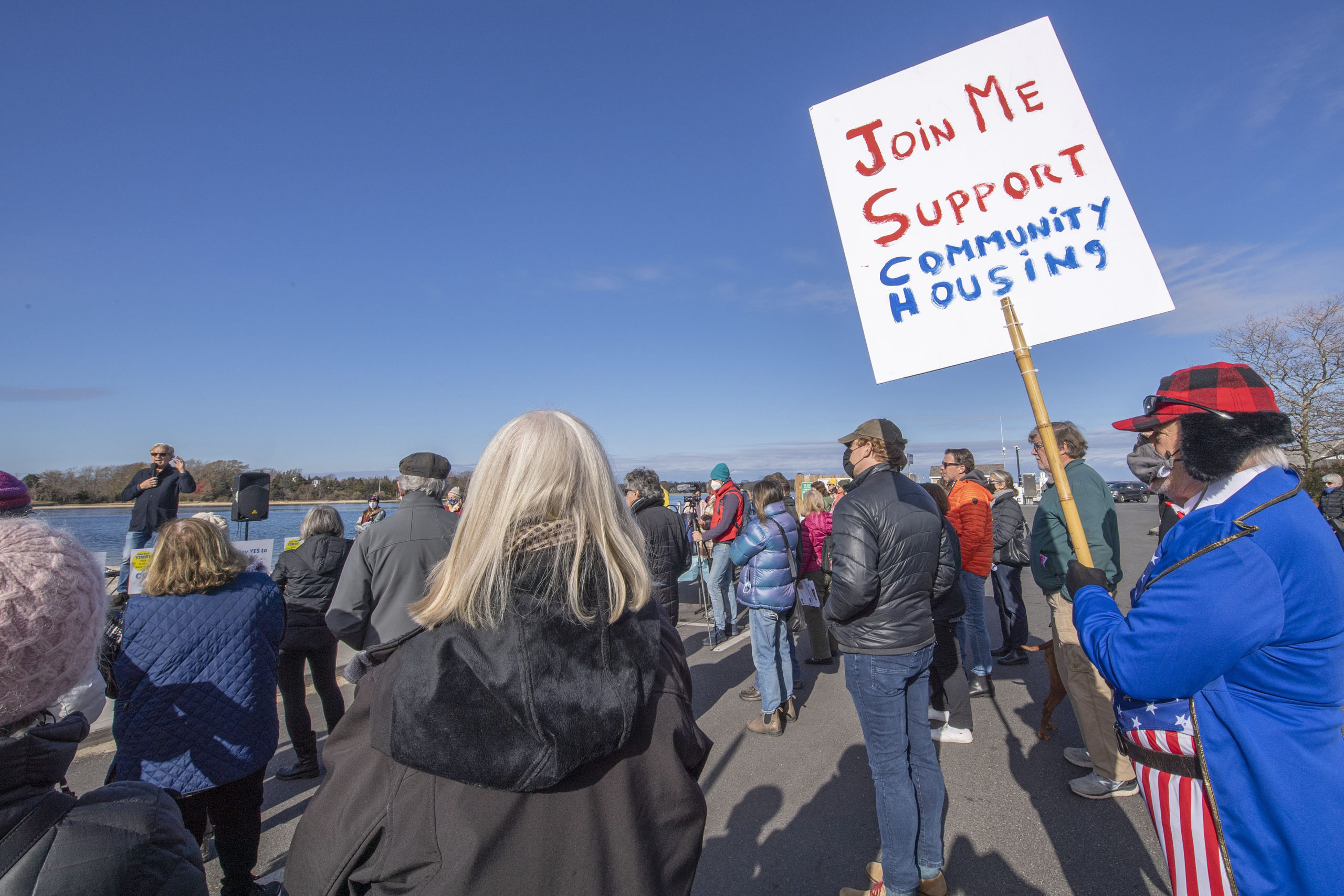 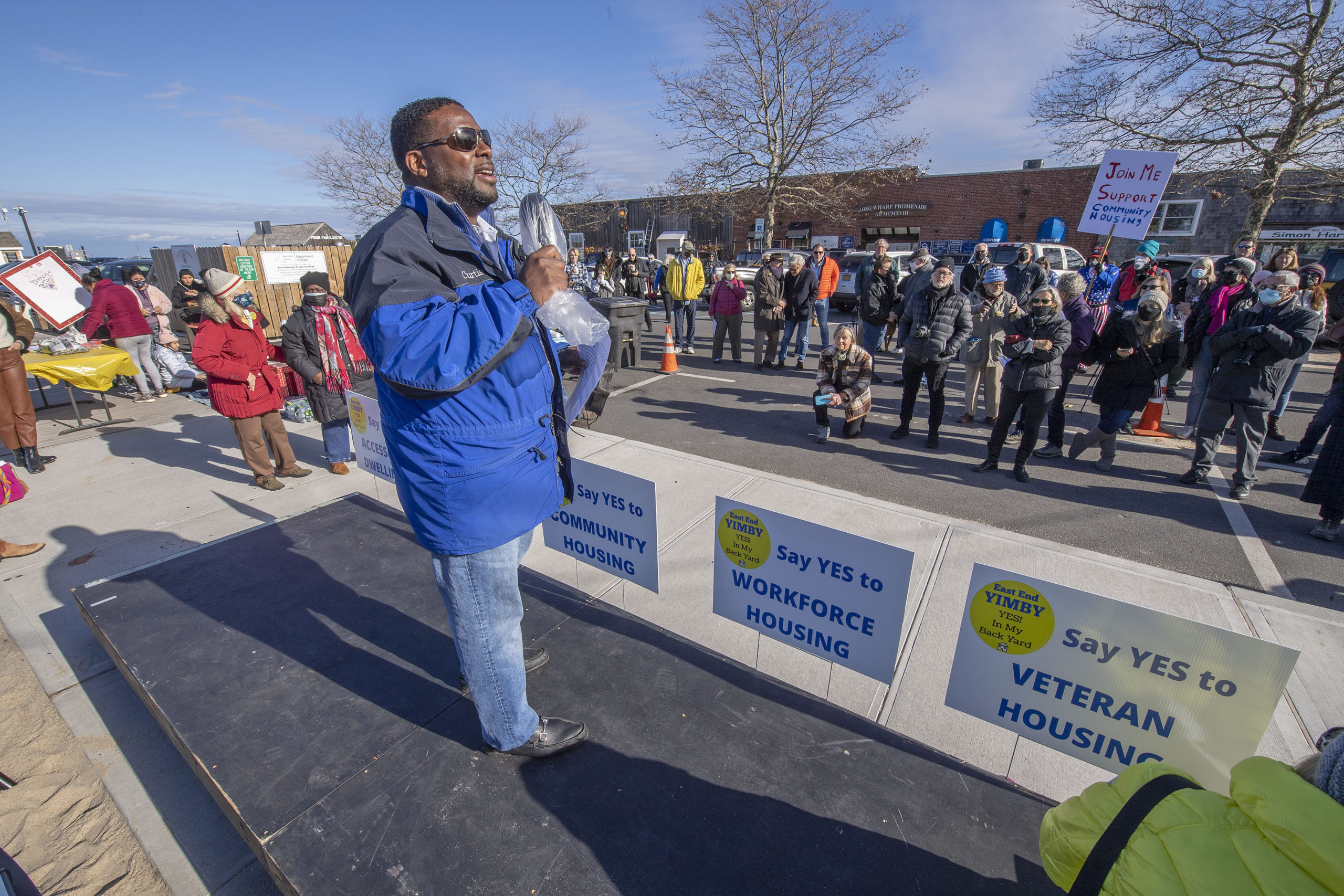 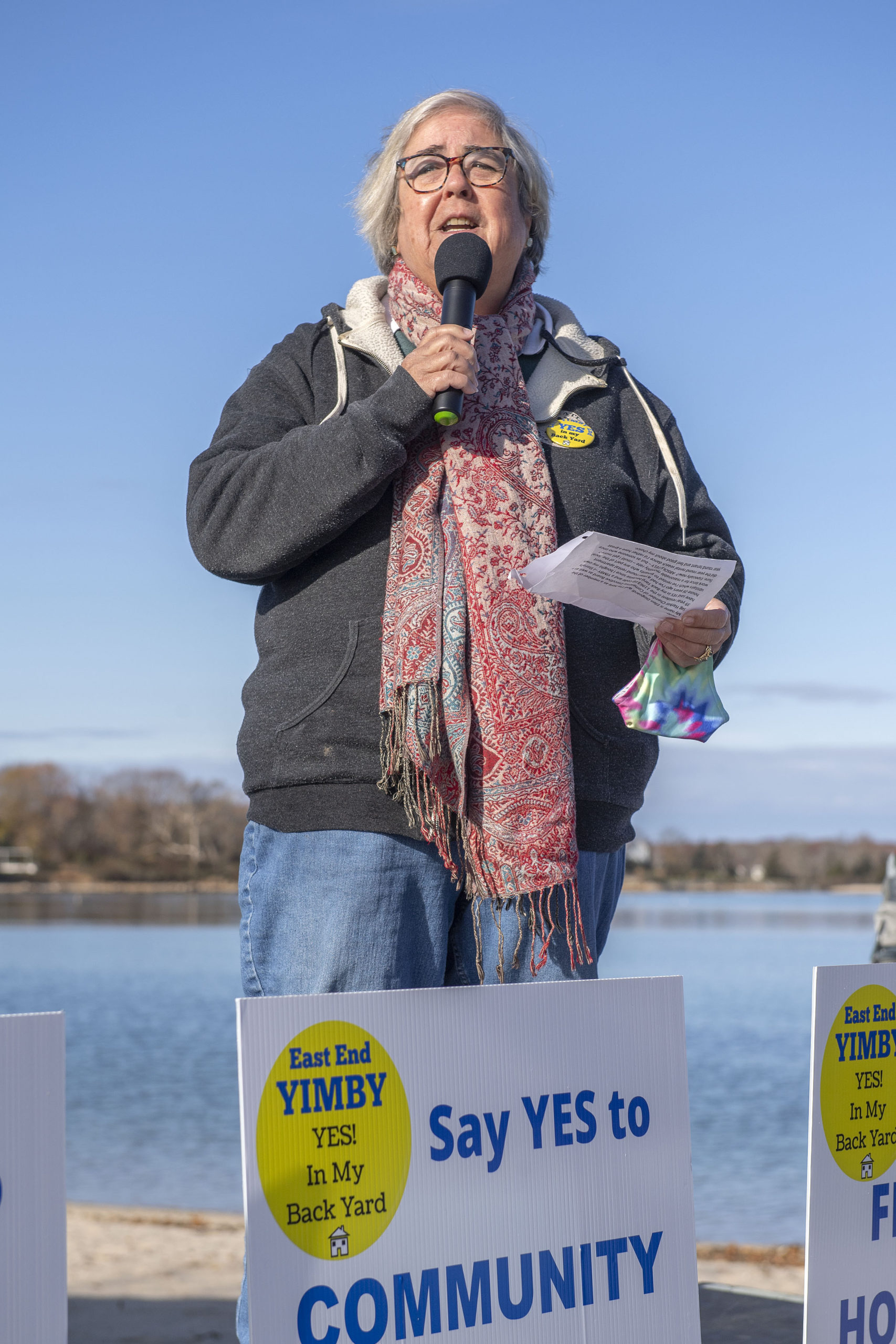 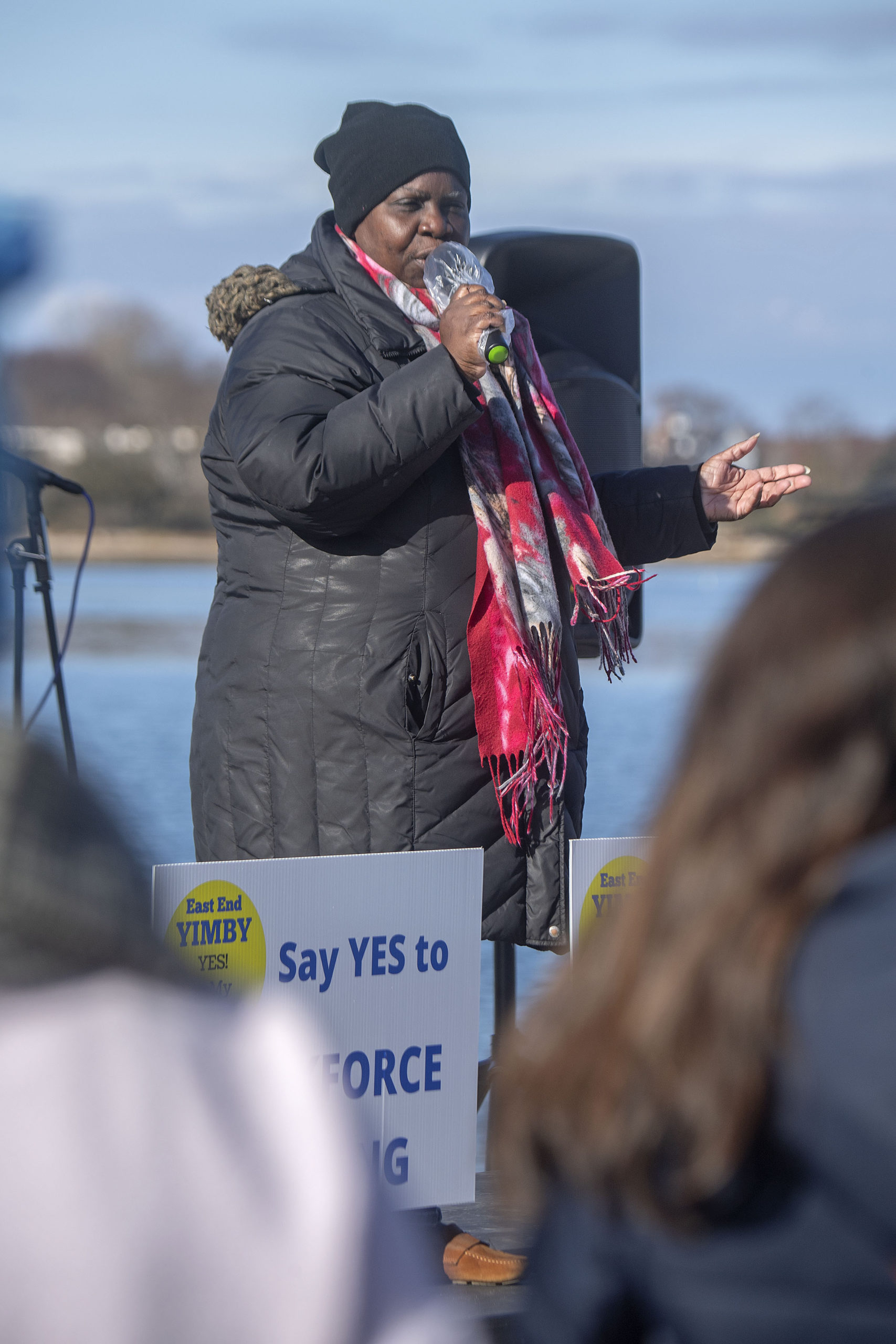 With the ongoing housing crisis seemingly getting worse by the week, about 100 people answered the call of East End YIMBY to rally at the foot of Long Wharf in Sag Harbor on Saturday morning. There, they demanded that something be done to provide more affordable housing for a growing segment of the population that is finding itself locked out of a future on the East End as house prices soar and rents follow closely behind.

In between spirited chants like â€śHousing is a human right, I will stay and I will fight!â€ť the crowd heard a number of speakers, who both outlined the scope of the problem and offered hope that solutions might be forthcoming.

â€śIâ€™ve been on the front lines watching this happen,â€ť said Michael Daly, a real estate broker and leader of East End YIMBY, which stands for â€śYes In My Backyard.â€ť â€śRight before my eyes, Iâ€™m seeing friends, neighbors, young people, business people struggle to be able to afford homes, struggle to be able to find rentals.â€ť

The coronavirus pandemic has only raised the situation to a â€śfeverish pitch,â€ť he said. â€śWeâ€™ve created a classic conflict between homeowners and renters. Renters are now second-class citizens.â€ť

Daly outlined a four-step plan. First, â€śjust take a breath and have some passion for our fellow man,â€ť he said, an apparent reference to landlords who continue to raise rents. Second, he urged people to educate themselves about the obstacles to affordable housing. â€śA lot of it is ignorance,â€ť he said, referring to homeowners who oppose affordable housing efforts in their neighborhoods. â€śI donâ€™t say that with anger, I say that with disappointment.â€ť

Finally, he said housing supporters need to support plans for affordable housing and continue to advocate for proposals that are put forward.

Sag Harbor Mayor Jim Larocca said he expected the Village Board to unveil a plan as early as next week or by January at the latest that would â€śdefine the entire village as an affordable housing district.â€ť

What that means has yet to be defined, but Larocca said the village is obviously constrained by the lack of vacant land within its boundaries. â€śWeâ€™re going to have to be much more measured and focusedâ€ť than the towns are, he said, adding that the village needs to find places for both workers and senior citizens to live.

â€śThe sentiment expressed here is one we all share,â€ť he added. â€śThe problem is in the details.â€ť He urged housing advocates to â€ścome and be heard and be as specific as you can possibly beâ€ť when hearings on the housing plan are held.

Bonnie Cannon, the executive director of the Bridgehampton Child Care and Recreational Center, who is also chairwoman of the Southampton Housing Authority, also raised hopes that a short-term fix for some people may be on the horizon. After exhorting the crowd to support efforts to provide more affordable housing, she said, â€śWe have a project, a very big project that can be done in Bridgehampton, that can have many affordable units in Bridgehampton. I will say no more.â€ť

Curtis Highsmith, the executive director of the Southampton Housing Authority, also spoke. He told the crowd that while the housing authority had built more than 20 houses over the past five years, that was just a drop in the bucket. He said the town has several waiting lists with more than 1,000 names on them.

He also called for support when the housing authority brings forth new housing proposals.

Erin Oâ€™Connor, a teacher who has lived on the East End since 2004 but now feels herself being pushed out by ever-rising rents, seemed to embody that.

â€śItâ€™s easy for me to feel like a failure,â€ť she said. â€śIâ€™m a college grad with a professional degree, a career of which Iâ€™m proud. I did a lot of the right things, but Iâ€™m not financially stable.â€ť

Oâ€™Connor recounted how she and her family initially lived in a home owned by her husbandâ€™s family in Bridgehampton, but after she was divorced, she had to move into several rentals, each more expensive than the last, forcing her to work longer and longer hours until she was virtually exhausted â€” and homeless, living with friends and commuting back and forth to Connecticut, where she has family.

It need not be that way, said Michelle Leo of Noyac, who said she was able to afford a house because of an inheritance.

â€śIt shouldnâ€™t take the death of grandparents and a random uncle to leave behind some funds so I can put a down payment on a house,â€ť she said, adding that she didnâ€™t want her children to live in an apartment in her basement because they could not find housing on their own.

And Minera Perez, the director of OLA of Eastern Long Island, an advocate for the Latino population, said that even people who have been forced to live in inhumane conditions are increasingly facing the threat of evictions as landlords seek to maximize their returns, and that OLA would help them in their legal battles.