Saying Goodbye To An Old Tree 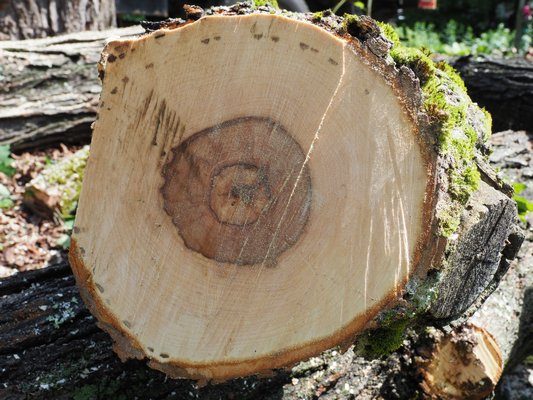 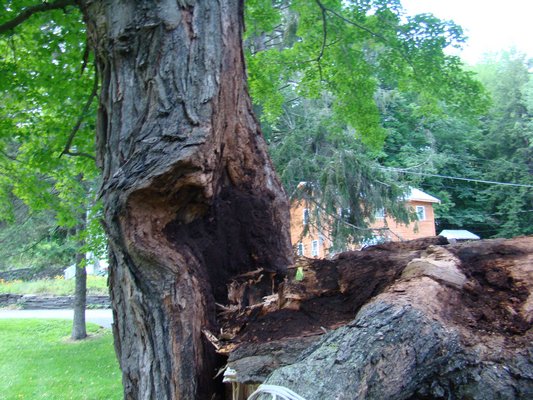 The decay and rich humus from the breakdown of the organic matter at the point of separation gave good indications that the limb drop was inevitable. ANDREW MESSINGER 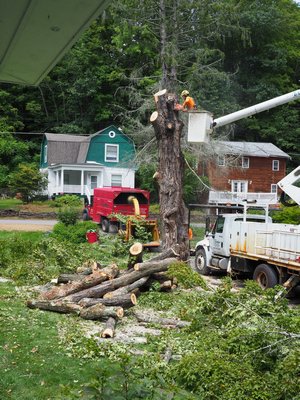 With only 25 feet of trunk remaining, the scar from the 2009 limb drop is visible at the front left of the white truck. ANDREW MESSINGER 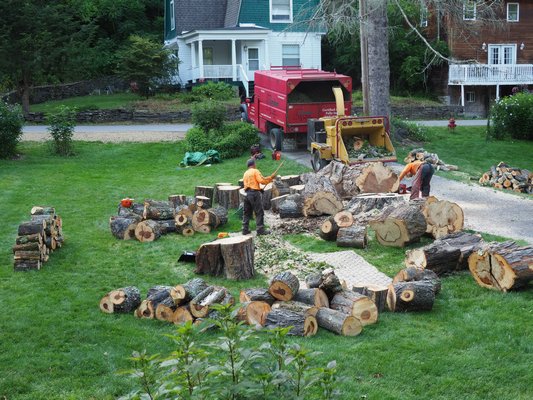 After a long day’s work, all that remains of Sugar are a few inches of her stump and plenty of wood to be split. She’ll be remembered through the winter of 2021 as her wood heats our house for most of the winter. When cut and split, the wood amounted to nearly four full cords. ANDREW MESSINGER 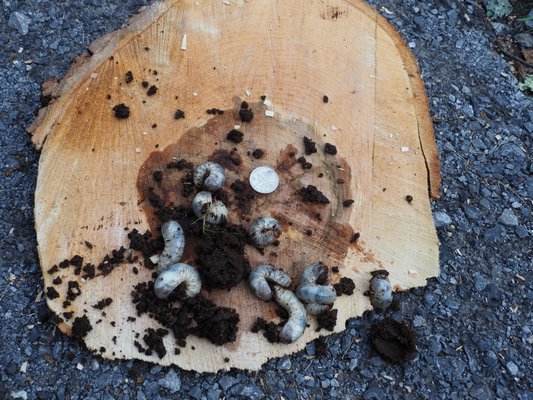 As Sugar was dismantled, the grubs from a scarab beetle showed up in one of the sawn trunk sections. The grubs didn’t cause the tree’s decline but are pretty good evidence that the core of the trunk was rotting. ANDREW MESSINGER 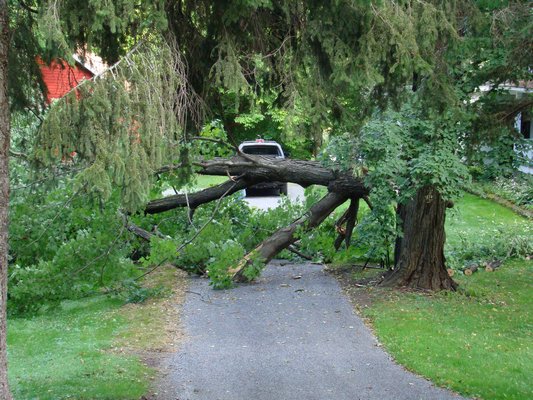 It was August 7 in 2009 when Sugar dropped a major limb that shook the neighborhood. This was only a chapter in her decadelong demise. ANDREW MESSINGER

It was hard to tell exactly how old sugar was, but this trunk section from about 20 feet above the ground had over 70 annual rings. ANDREW MESSINGER

I’m sitting on the front porch of our house with neighbor Nancy and the tears are streaming down her face. We are both in the process of losing an old friend. While the death has been pending for a while, today is the day. We are saying goodbye to the maple tree that has stood in front of our house for close to 150 years.

I’ve known for years that the tree had to come down. The first sign was about eight years ago when the easterly portion of the tree came down of its own volition on a hot summer day. Falling with a loud and resounding thud that shook the house. I was in the shower at the time, and I darted out to see what had happened. Nothing was obvious at first but when I dried off and walked around the house there was this 15-inch diameter limb on the ground with all its branches blocking the driveway.

It’s not an uncommon thing for trees like this to drop large limbs seemingly out of the blue, but once the limb was down it was apparent that there was abundant rot where the limb and trunk were once joined. The day the limb dropped was the day that the weight of the limb was just more than the fibers of the tree could hold any longer, and at that precise moment, it came down. But being a sugar maple, the wood provided firewood and heat for my other neighbor Butch for several weeks the following winter.

Where the limb had split from the trunk, the resulting scar became a magnet to a host of insects and other animals who, over the next few years, drilled, pecked and snacked at the areas of rot. I drilled into the 40-inch trunk and inserted a stainless steel hollow tap to allow the water that accumulated in the trunk to weep out, but that didn’t stop the carpenter ants, sow bugs and others from working on the festering wood.

Next were the beetles and other insects that inserted their eggs into the wood so their larvae could pupate, feed and emerge into moths and beetles. But the woodpeckers had other ideas and for years would circle the trunk on a regular basis making concentric circles of pecked holes around and around that they attempted to extract the bug eggs and pupae from. The tree being a sugar maple, in late spring while this drilling and pecking was going on, another bird began to visit like clockwork.

The woodpeckers would come either singly or as pairs, circle the trunk and hunt, then fly somewhere else in the neighborhood only to return 20 minutes later. But in their absence, a ruby-throated hummingbird would visit the trunk and meticulously extract the maple’s sweet sap from each and every newly tapped hole. It was quite an amazing dance that Mother Nature seemed to have choreographed with exquisite precision, and this too went on for several years.

The maple was also a provider of a different sort. As it dropped its leaves each fall, I would bank them under the tree in a huge pile. Some would go on the perennial beds as a winter mulch that was perfectly light and fluffy just like goose down. The balance of the leaves would go through the shredder and be incorporated into the compost for soil building in the perennial beds at planting time.

But the grand old lady’s time was coming to an end. I had to keep a sharp eye on her lest she — only 40 feet from the house and 60 feet from the power lines — come down on the roof, the power lines or both. But the last thing I wanted to do was take her down. I’d lose her stately beauty and afternoon shade even though she was sagging from age. I’d lose her leaves and her half a year of blocking the view of Kenny’s ramshackle of a house across the street. Even last spring I feared that this was her last year.

Then about two months ago a carpenter friend, who is also a woodsman, noticed that a large crack was visible about 25 feet up the trunk and you could see daylight through the vertical 2-foot gap. At that point I knew that one bad summer thunderstorm or twist of the wind could bring at least half of the tree onto my porch and living room. It was time to make the arrangements.

The bid came in at around $2,500 and even if I wanted the wood left on-site cut to 15- and 20-inch logs, the bid stayed at $2,500. The arborist’s logic was that the cost would equal out if he had to chip the brush and cart off the logs or do the cutting to firewood lengths. So the price never changed, but I got to keep the chips and green debris, which would compost quickly. I would keep all the logs 8 inches in diameter and under for the wood-burning stove while my carpenter friend would bring over his splitter and use all the rest for his stove.

The crew showed up at 9 a.m. and so did Nancy. By 11, every green leaf, twig and stem had been sawn off and had either been run through the chipper or was laying on the rubber mats on the ground intended to catch the falling timber and not damage the lawn. And it was at this point, when the last leaves and twigs fell, that Nancy began to sob. So three men with a bucket truck, a chipper and chipper truck, along with a selection of chain saws, wedges and log-moving tools and ropes, did their work. By noon, all that was left standing was the naked 25-foot section of trunk.

I darted in when the crew was taking a break and counted the rings on one of the 12-inch limb sections that had been dropped. This piece alone showed 50 years of growth with all the signs of wet years, dry years and series of years that were “normal.” It was harder to count the rings on larger pieces as the growth pattern was not perfectly concentric. And while we know the tree doesn’t show up in a postcard of the house from the late 1800s, it could well have been planted around 1850 or earlier.

The following day, Bruce brought over his splitter, and he and his wife began to split the large trunk sections. There was a knock on the door and Nancy said I had to come out and see something. In one of the log sections they had found about 15 very large and extremely gross white grubs about an inch long and a third of an inch in diameter. The were apparently grubs of a scarab beetle, feasting on the decaying interior of the truck and doing more of Mother Nature’s work.

By 6 p.m. the crew was exhausted and cleaning up. Thunder in the distance was a warning that it was time to wrap up and within 15 minutes a heavy downpour washed the scene of sawdust and chainsaw chips. The grand old lady was done. Sad, yes. But I’ve already have my eye on a new sugar that will probably be planted in late October. Alas, she’s only 15 feet tall, but, hopefully, she’ll be loved and cared for by the generations that succeed me on this little piece of heaven.

In the older sections of the East End, like in the villages of Southampton, East Hampton and Sag Harbor, there are still trees around that have survived decades of land ownership changes, hurricanes and clueless landscape designers. A mindful property owner cherishes these older trees but also knows they are not ageless. Hopefully, they and you take the responsibility to plan and plant like someone will still be in the Hamptons a hundred and hundreds of years from now. Keep growing.