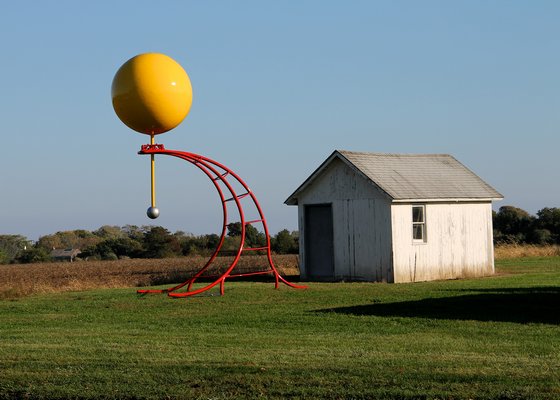 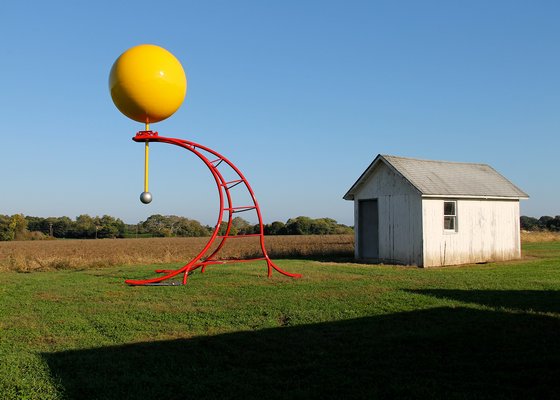 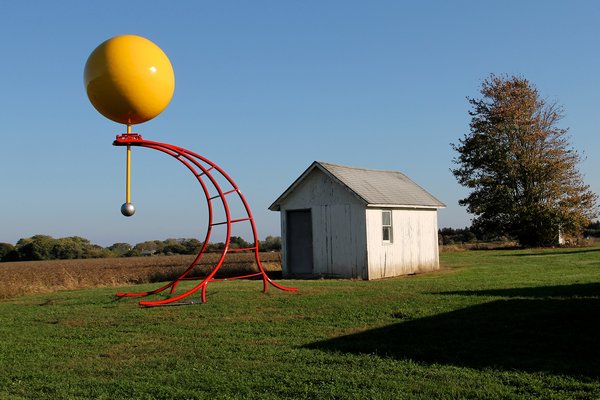 The large yellow ball held aloft by a bowing red ladder on a Sagaponack farm field is Robert Mojeski’s “Tipping Point XIX.” The kinetic sculpture went up—up is an operative word, as the piece is 19 feet tall—the Friday before last, around the time that potatoes were being dug.

With its curves and bold colors, the piece is pretty hard to miss from Montauk Highway just west of Town Line Road.

“Obviously, it’s a prime location, just very visible,” said Mr. Mojeski, a Southampton native who lives in Sag Harbor. “It’s made to be seen. I need people to see it and appreciate it ... and enjoy it.”

A former commercial fisherman and continuing fan of Alexander Calder, Mr. Mojeski said he’s been sculpting pretty much all his life. His works have been shown in New England galleries, at Guild Hall in East Hampton and, presently, at the Hooke Sculpture Gallery in Sag Harbor. He also does commissions.

“Basically, I became fascinated with motion,” he said of the evolution of his pieces. “This last one is a buildup, if you will, of my fascination.”

“Tipping Point XIX” weighs almost a ton and is what the artist called “the meta” of his larger works. Even so, he said, “she’s very elegantly framed.”

The sculpture in Sagaponack is made of fiberglass, aluminum, steel and lead for counterbalance. The “tipping point” is where a metal shaft connecting the two balls meets a gyroscopic joint that allows them to oscillate in the breeze. “It doesn’t matter which direction the wind comes through,” Mr. Mojeski said. “It will dance.”

The piece took about five months to make. Larger works like this present a logistical problem in terms of finding a space, but Ken Schwenk loved it, so there it sits on the field outside his house.

“It’s a scarecrow,” Mr. Schwenk pointed out. “There’s no birds on it, right?”

The property owner has already seen people pull to the side of the road for a better view of Mr. Mojeski’s work, which has the title and artist’s website, www.robertmojo.com, on a plaque at its base.

Viewed from Town Line Road, the sculpture, with its red and yellow elements, can look like the sun coming up in the west, according to Mr. Schwenk. “It’s quite interesting,” he added.

“I really like it, and part of me is going to be sad to see it go,” he said, referring to the possible future sale or relocation of the work. “It’s a beautiful thing,”