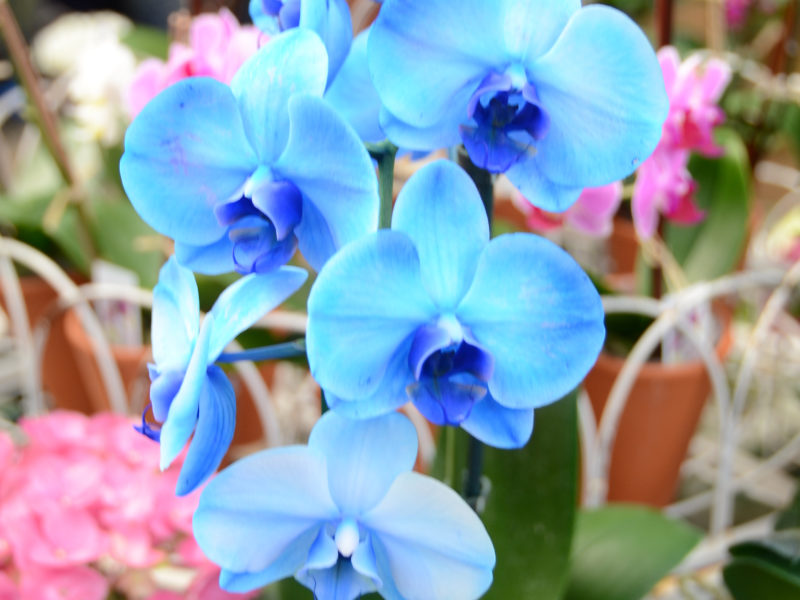 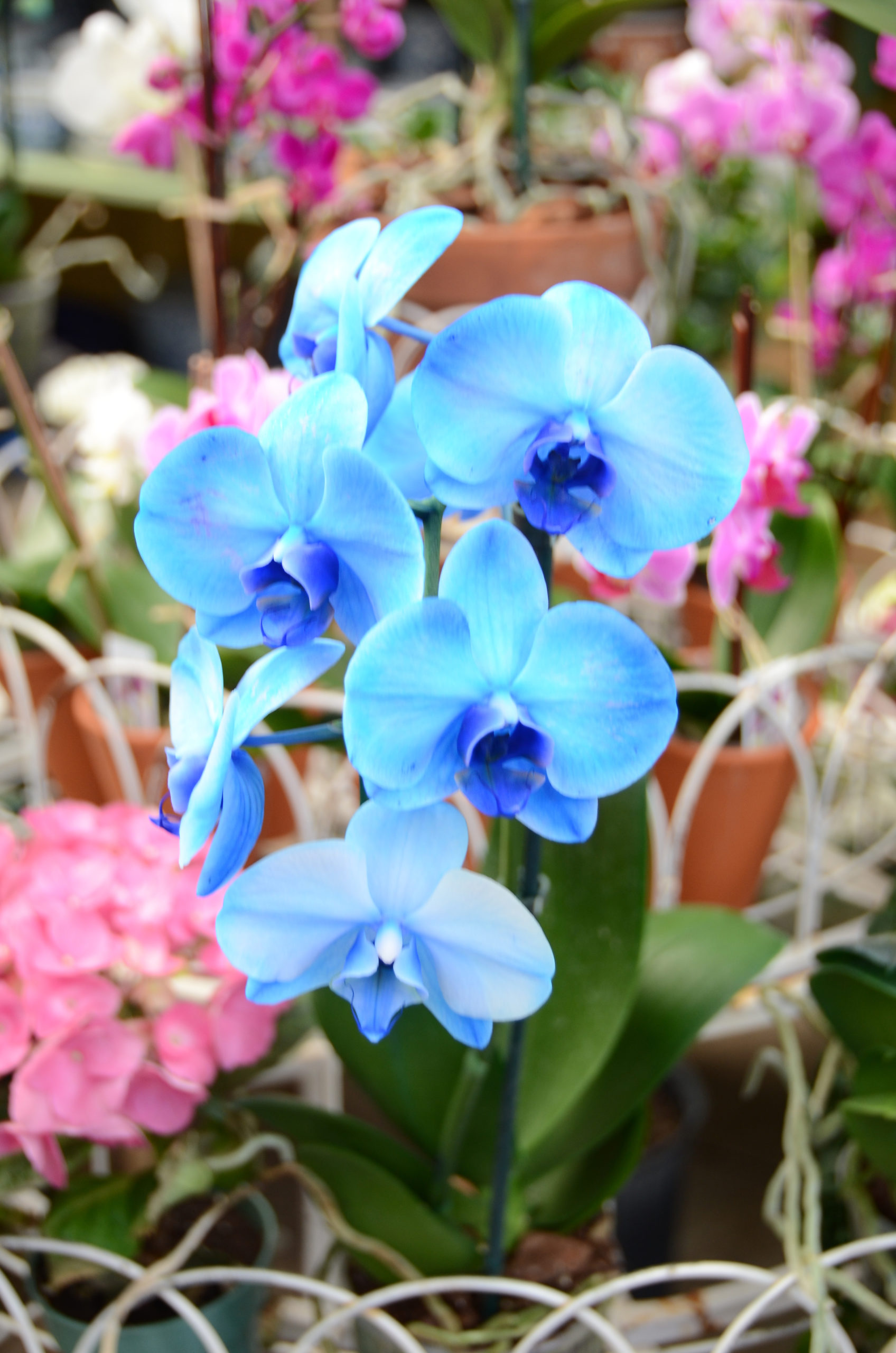 If you see one of these "blue" orchids for sale, be aware that blue dyes are used to "infuse" the color. The next time this orchid flowers, it’ll be white. 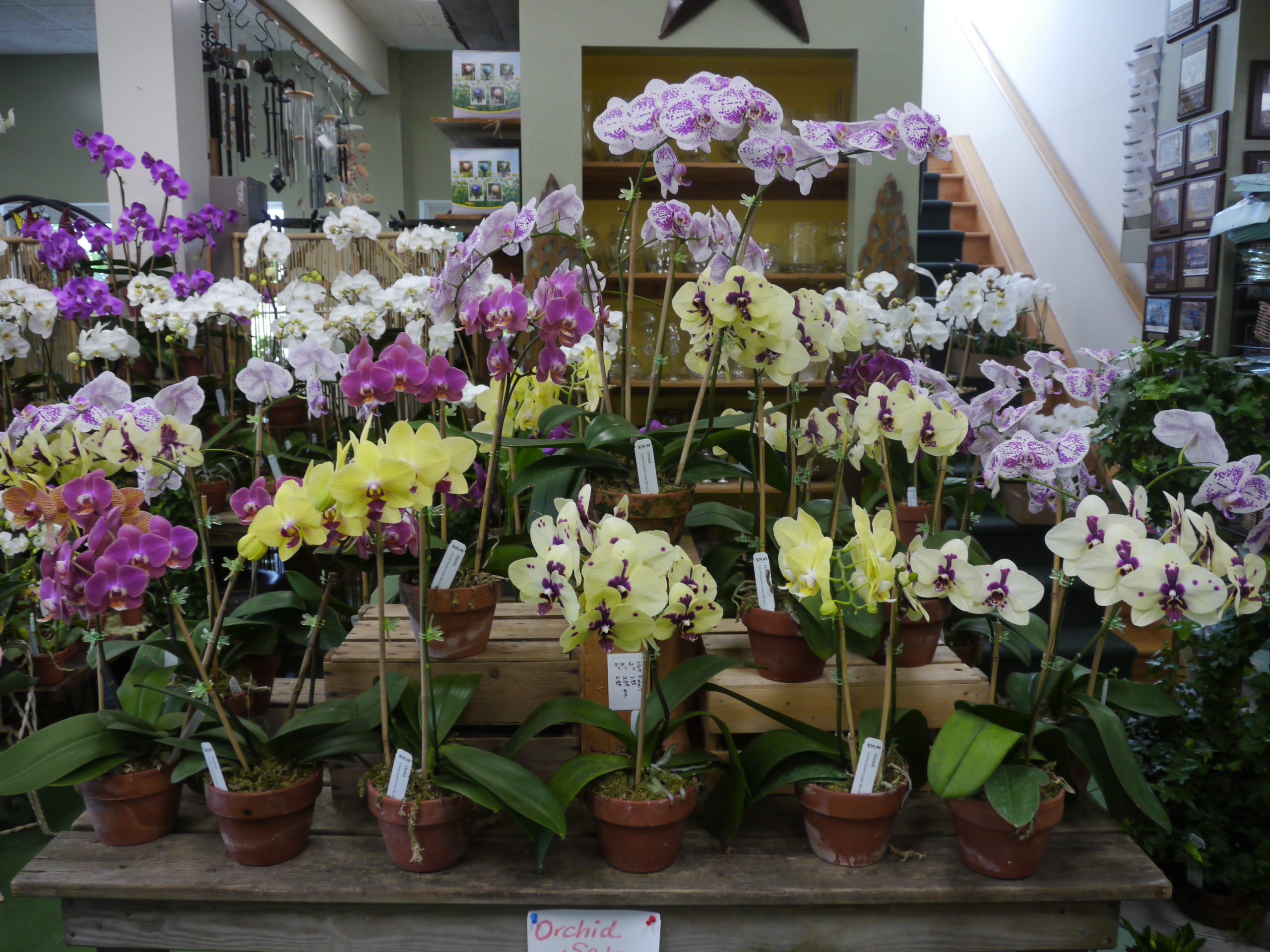 Most of the East End’s garden centers and plant shops have lots of orchids at this time of the year, but they go very, very fast. ANDREW MESSINGER 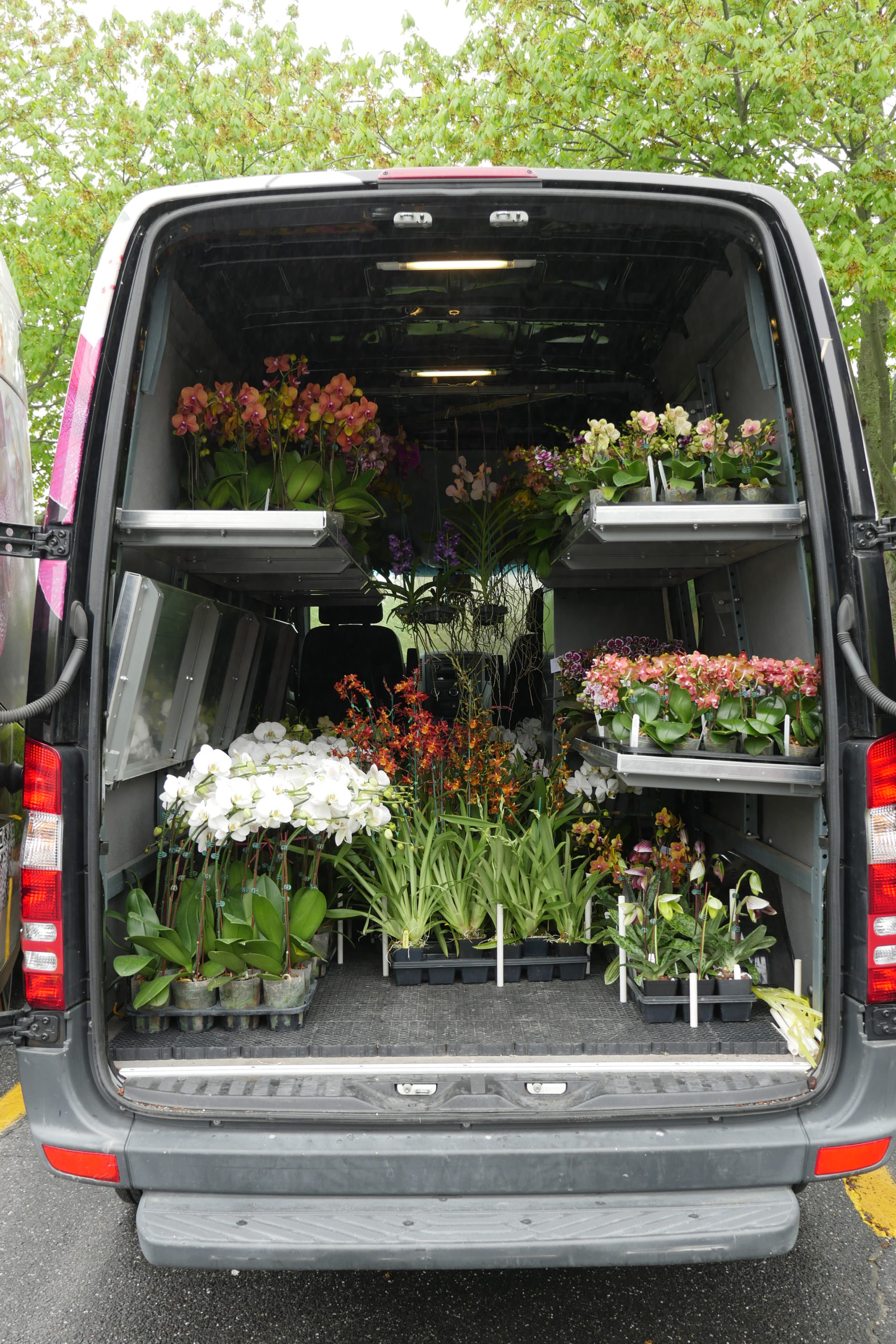 A van full of orchids being delivered to a Southampton garden center. How about one or two? ANDREW MESSINGER 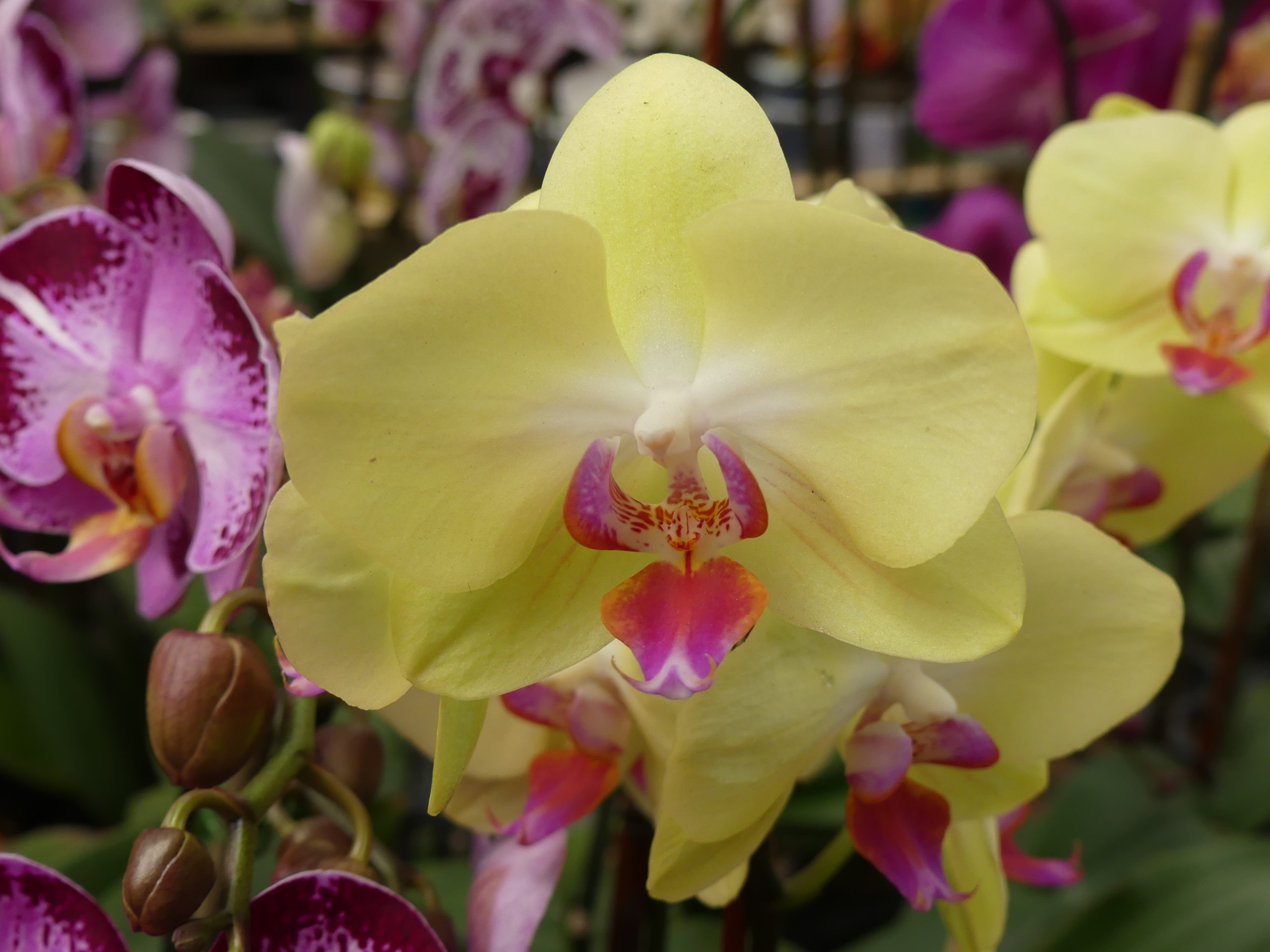 This beautiful yellow Phalaenopsis orchid could be blooming in your home, now. This is one of the easier orchids, and once you get the hang of it the flowers last for months. ANDREW MESSINGER 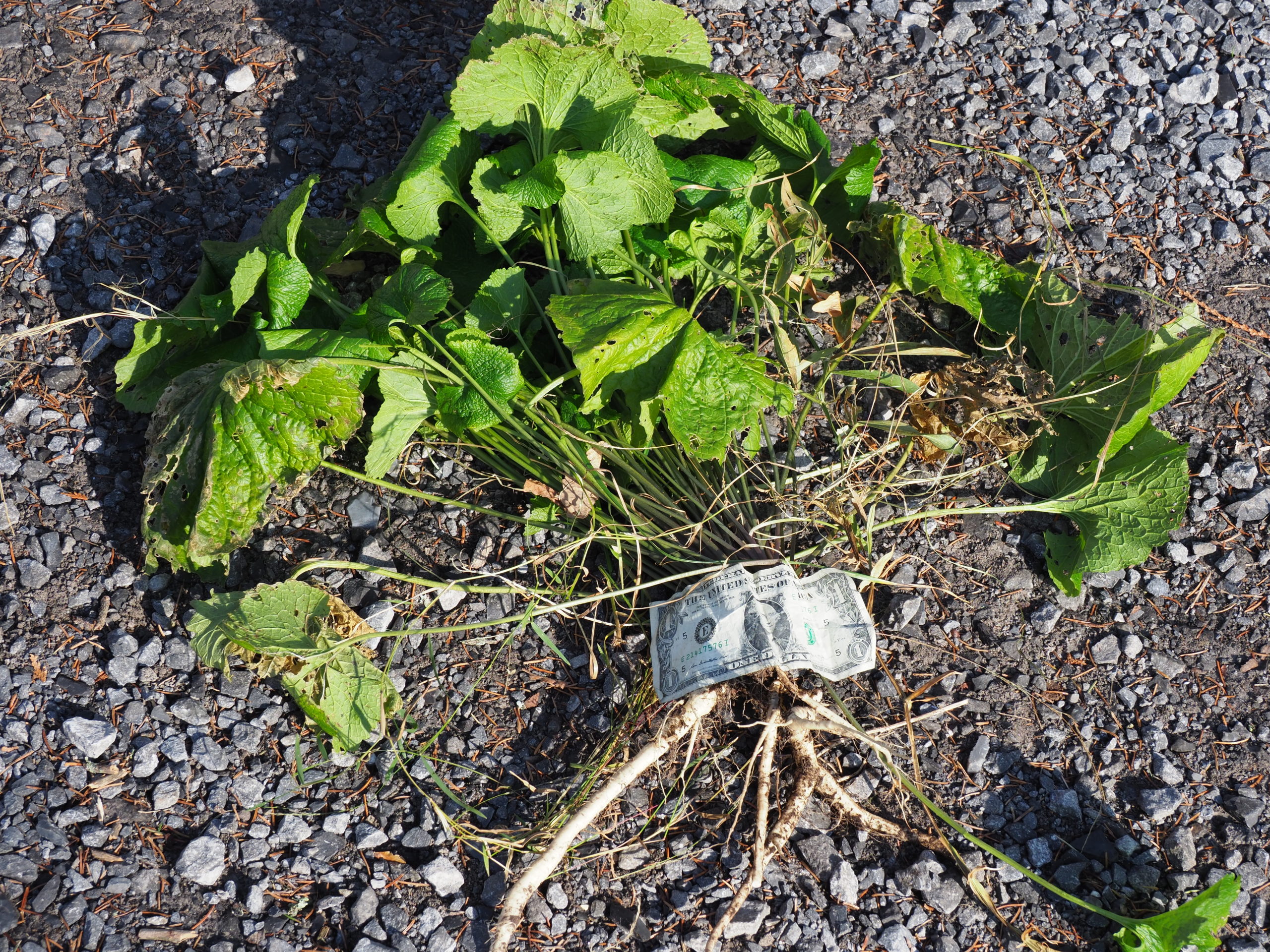 Most gardeners see garlic mustard (Alliaria petiolate) in the spring as a short plant or when it’s in flower early summer. This plant is just from the 2020 growing season. The foliage will die back in a freeze and in the spring it will re-emerge, flower, let loose thousands of seeds, then die. Pull it out now: no seeds, no new plants. ANDREW MESSINGER

Thanksgiving is only two weeks away, and I have to confess that this is indeed a time of year when I’ve been thankful, but not for the traditional reasons.

Every other year my former employers had their families fly in for the holiday weekend. For them, it meant a chance to gather with relatives, feast on the foods of the season and catch up on the latest family news and gossip. For me, however, it meant an expansion of my orchid collection. For as sure as Christmas has its trees and poinsettias, Thanksgiving has become my holiday of the orchids. Permit me to explain.

To begin with, the house was huge and somewhat cold. To add a touch of warmth and a hint of life, a few weeks before Thanksgiving a woman who owns an orchid nursery came over from Connecticut. She wandered the house from the grand rooms to the smallest of sitting rooms and powder rooms, making notes and talking to herself. A week later she’d show up with a truck and some helpers, and the parade began. Orchids of all shapes, colors and sizes were tastefully deposited in just about every room, and in just an hour the house is transformed, filled with color, greenery and scents.

Thousands and thousands of dollars were spent, and these wonderful plants adorned the house for weeks and months until the flowers began to fade. But once they faded, the lady of the house became bored with them and slowly they were commanded to become invisible. The house staff migrated them to the kitchen, the laundry room and even the gloomy staff quarters. No one had the heart to trash them. By March and April, there were too many flowerless orchids to hide, and I began to find them headed toward the compost pile. Few made it. Many of these plants that may have cost hundreds of dollars each became disposable. But knowing that many of them can be easily, almost effortlessly coaxed back into bloom — they ended up in my humble abode.

When I first started this little ritual 20 years ago, I did it out of guilt. I just can’t stand to see a good plant die. I brought a couple of the orchids home, set them near the window and just watered them with my other plants. That’s it. Three months later one began to flower, then another and another. I was in heaven and my skill as a professional horticulturist had again been rewarded. So my family thought. Remember though, all I’d done was provide water and light. So much for orchids being difficult. Some are, some definitely (really spectacular ones) aren’t.

So maybe it’s time to start a new Thanksgiving tradition. Fill your house with orchids, give them as gifts, and with just a little patience, a little reading, some water and light, these can be the new holiday plants that can bloom for months (really) and do it again. Orchids are for giving. Thanks. But which ones?

It’s now hard to find a garden store, greenhouse or big box that doesn’t carry a line of orchids, and this is a great thing. In fact, the orchid business has become so big and so many orchids are now grown (millions) that you can often find them for less than $15. At one Southampton garden center, it’s not uncommon for 40 or 50 orchids to be sold in a few day — and they’d sell more if they could get more.

It wasn’t so long ago that most plant lovers looked upon orchids with awe and respect, but from a distance. It was never a plant that you’d ever try at home or in your greenhouse. After all, everyone knew how difficult it was to grow orchids. Well, this simply isn’t the case anymore, as long as you buy the right types. Of course, you need some basic knowledge about which varieties will work in your particular situation. And a word of warning: If you are buying an orchid for yourself or giving one as a present, be forewarned that growing orchids can become highly addictive and there is only one cure — more orchids.

While it may not be a good idea to purchase orchids at mass merchandisers at the price, it can be worth the gamble.

It’s safer to shop at local greenhouses, plant shops and the more than a dozen specialty orchid growers in the metropolitan area that offer a wide range of top-quality plants as well as a knowledgeable staff who can make recommendations and answer your questions.

With the explosion in the popularity of these plants, there is the real potential for shortages at the holidays, so try to shop early. Look for plants that are just starting to bloom or are well budded. Orchid supplies will be stronger than ever for holiday sales, and producers are gearing up to meet the increasingly robust demand. However, while consumers can count on having the “Big Three” available in reasonable supply, the rarer plants may be somewhat elusive.

So, what are the big three? The first and foremost are the Dendrobiums. These are almost ubiquitous in the marketplace today and give a colorful and long-lasting display. These are also very cost effective when compared to floral arrangements that may only last days. The sprays of long-lasting blooms come in almost all colors of the rainbow, with lavenders predominating. Modern hybridizing has allowed both the standard types, ranging to 24 inches and more, and new breeds of miniatures, often no more than 8 inches, to be perfect windowsill plants.

Next, and climbing up the charts quickly in popularity and availability, are the moth orchids, or Phalaenopsis. Easy to care for, with an exceptionally long flower display, these are perhaps the best “houseplant” orchids and the ones that I find easiest to grow and rebloom. Given African violet growing conditions, even the most amateur grower can expect to reflower phals (that’s what orchid people call them). I’ve been delighted to have these orchids bloom for three to four months at a time in a bright southeasterly window. The flowers come in a range of pastel colors from the most popular whites, through pinks and stripes to some soft yellows.

The last of the three in this group are the dancing lady orchids, or Oncidiums, which are increasingly available. Their sprays of medium-sized blooms are often yellow but are now being developed in a range of colors in the autumn tones of mahogany, red and orange and in a variety of patterns.

If purchased in flower, any of these should have at least one bud left at the tip of the spike to guarantee freshness and the longest flower life. If placed in a draft-free location in the house and kept evenly moist, any of these three will give weeks and occasionally months of beauty for about the cost of a nice flower arrangement or multi-stemmed poinsettia. It’s not uncommon for a single bloom to remain in peak form for a couple of weeks, but if you can come close to the perfect growing conditions that these plants thrive in, you are going to be pleasantly surprised as your blooms continue to flower for six to eight weeks — even as new ones open.

When it comes time for the purchase, remember that, as a rule, orchids are not the most attractive of foliage plants, even under the best of growing conditions. If they’ve been poorly grown or neglected they’ll show it and should be avoided. The plant should be secure in the pot with firm, succulent leaves and pseudobulbs. If you can see fresh, white roots with green (growing) root tips, so much the better. Beware of the wrinkles and loosely potted plant. Remember, though, that most of these plants are epiphytes and don’t have particularly strong roots in the soil area. Occasionally, you’ll see a metal support or anchor that keeps the plant secure in the pot; this is fine.

Along with your orchid gift you may want to include the wonderful book “Orchid Growing for Wimps” (by Ellen Zachos, Sterling Press, 2002). This is a wonderful companion to accompany the plant, or precede it, and it’s one of my favorite orchid books even though it’s 18 years old. This is the book for those who think they’re difficult plants or who might be intimidated by them. It will ensure that the gift and the intended … keep growing.