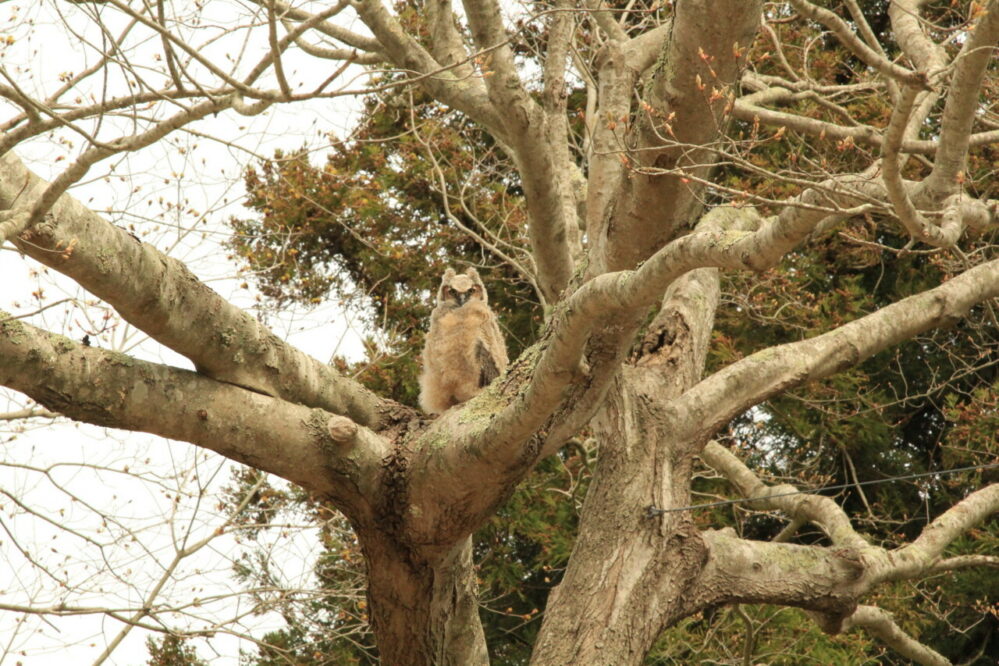 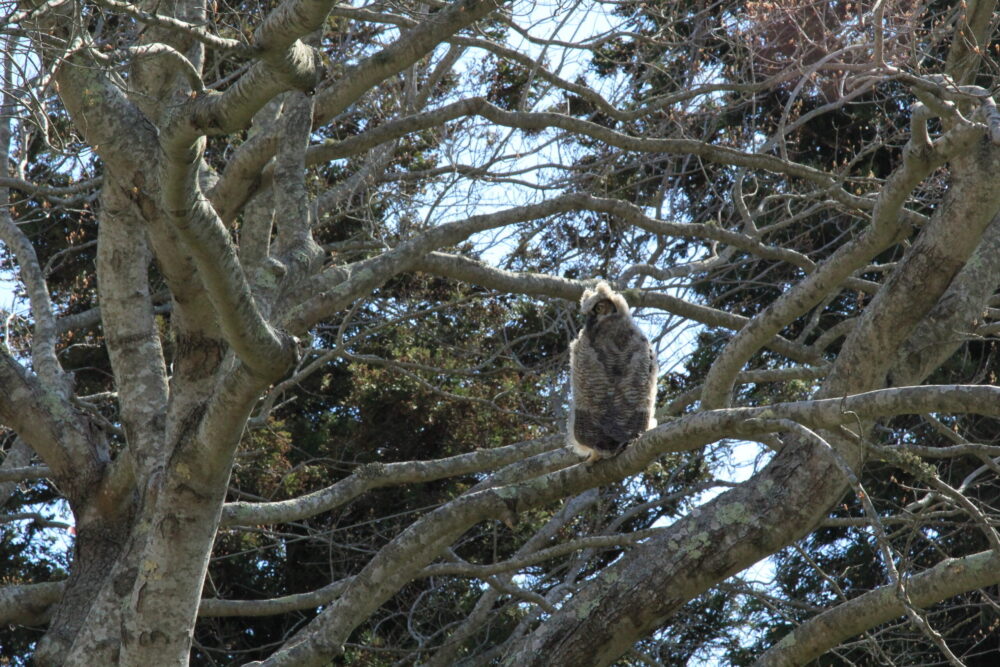 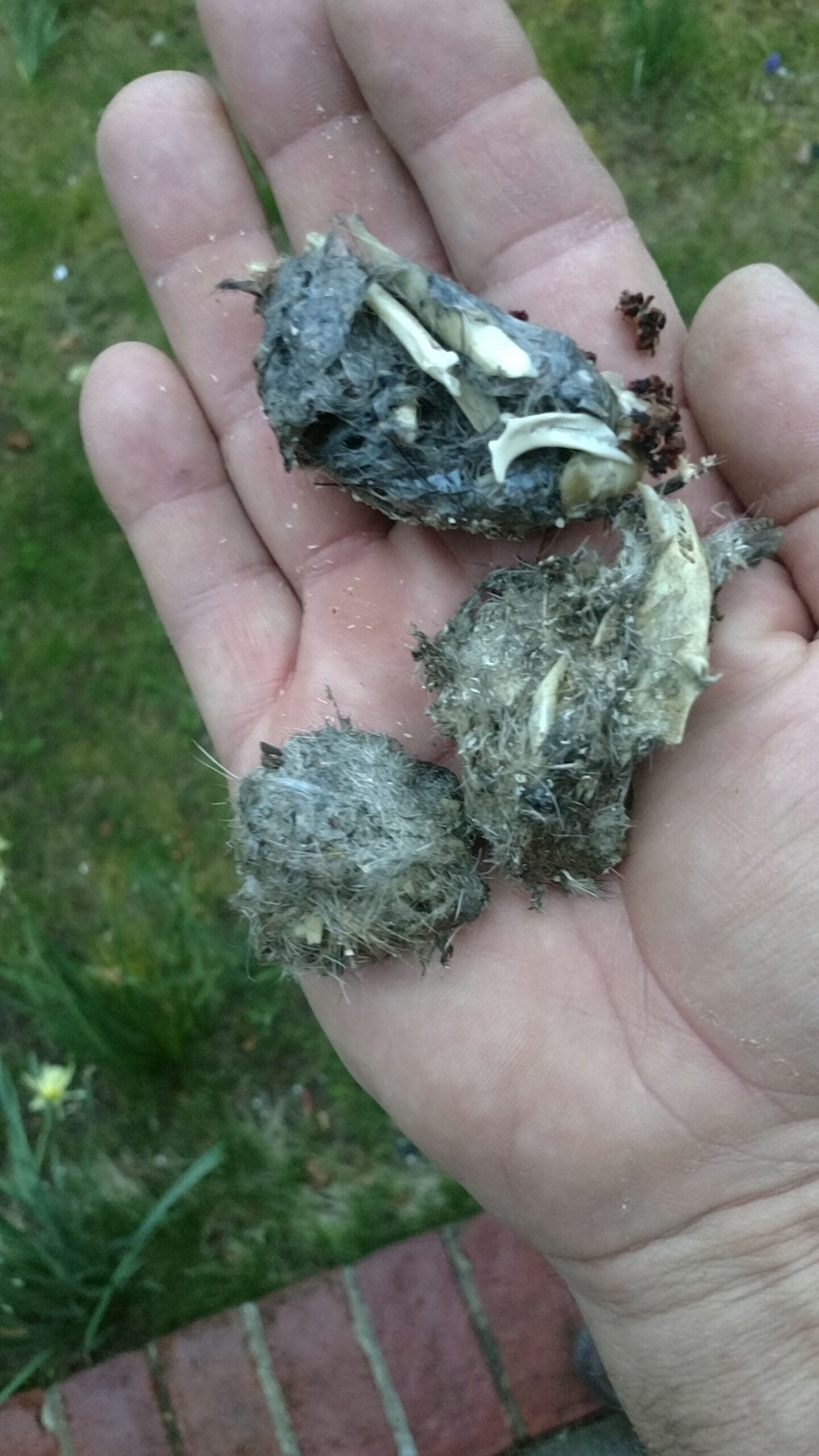 We had been working this particular garden in Southampton Village for more than 10 years when the discovery was made. It was the first week of April, and there on the bluestone path through the gardens, an owl “pellet” — the regurgitated fur and bones of an owl’s recent meal.

We found two more pellets the next day. It wasn’t until the second week, early in the morning, that we heard the distinct “who, who-who” and knew it was a horned owl.

“It came from over there,” my daughter said.

“No, it sounded to me like from that other tree.”

We both heard it, and again the following day.

The adult horned owl revealed itself a day later. The gardens were extensive and the owl remained perched in several trees throughout the week. None of the trees had leafed out yet. The owl was easy to spot. It never made another sound but was there each morning and remained with us all day. It was not intimidated by the presence of our crew or the six men that showed up to do work nearby.

By this time we had found 10 pellets and progressed to a different section of the garden, but still near the owl. In this new section of the garden there is a scraggly old tree with lots of character and several large diagonally growing trunks. As I approached the tree I noticed white bird droppings under one of the trunks. I looked up to see, 20 feet away, a very fuzzy, very large owl with very large claws, staring down at me. I looked to my left and a little bit higher, there in another tree, was the mother, also staring at me.

It all made sense. The pellets everywhere, the mother just hanging around for a couple of weeks. The juvenile couldn’t fly, of course, so the mother was catching the food and bringing it to the baby. On the ground, under the tree, were three more pellets. Two of these were so wet that small gravel stuck to them. We had read that owls regurgitate six to 10 hours after eating. They can’t leave the nest until they are six to seven weeks old and can’t fly until nine to 10 weeks old. We weren’t sure how old this juvenile was but we knew it couldn’t fly. We figured it climbed the tree and the hooting we had heard two weeks earlier was the baby calling its mother.

We had to do more research. Wild owls have an average life span of 13 years. They may remain in the nesting area, if food is available, for up to eight years. They don’t build their own nests but rely on the nests of other birds such as crows, hawks and herons. Squirrel nests may also be used. Their only natural enemy is other horned owls.

The last sighting of both owls was at the end of April. I watched the mother fly from a tree to perch on the garage roof. My daughter, working near the same tree the juvenile was in, heard a clicking sound and turned around to see the juvenile run from behind the tree to the bushes. She recorded a 10-second video of it. If you didn’t look closely you’d think it was a chicken. We have not seen them since then but will always remember those few weeks we shared.