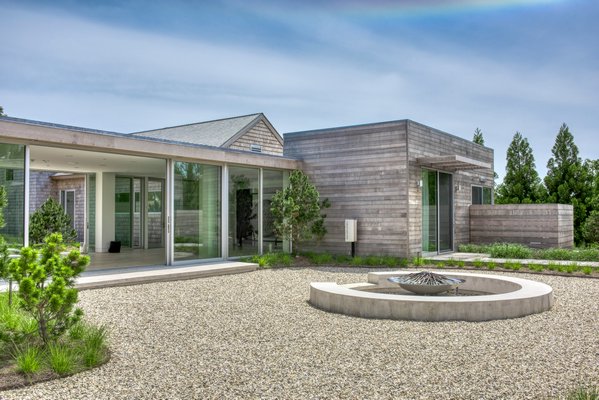 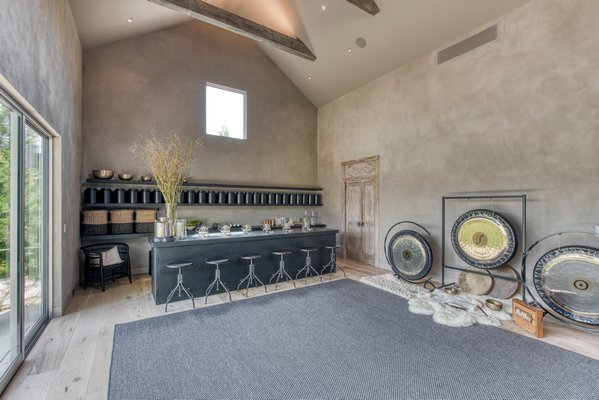 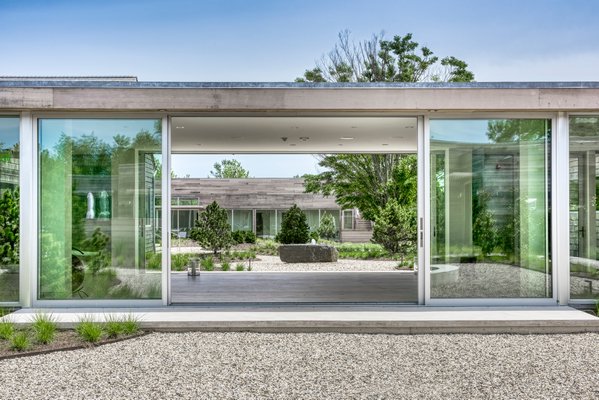 Looking through the Meditation Hall to studios beyond. LIZ GLASGOW 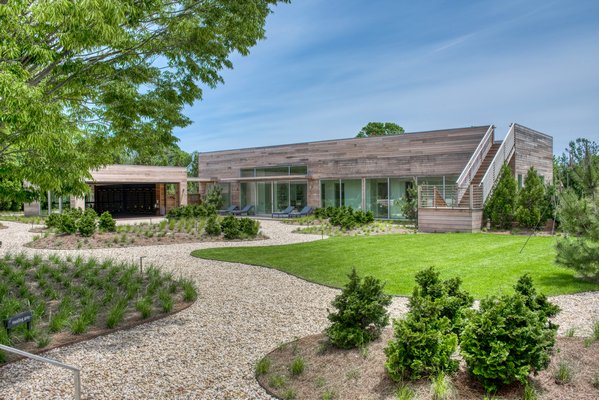 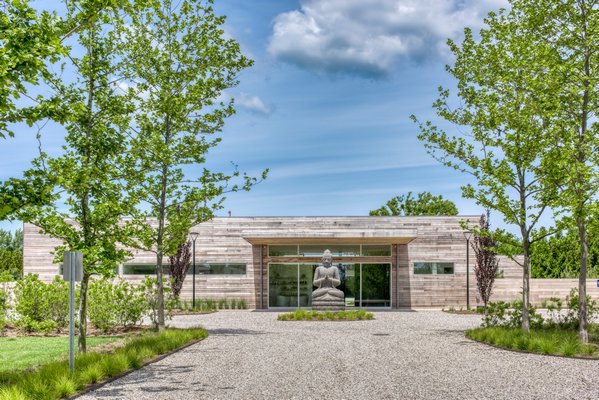 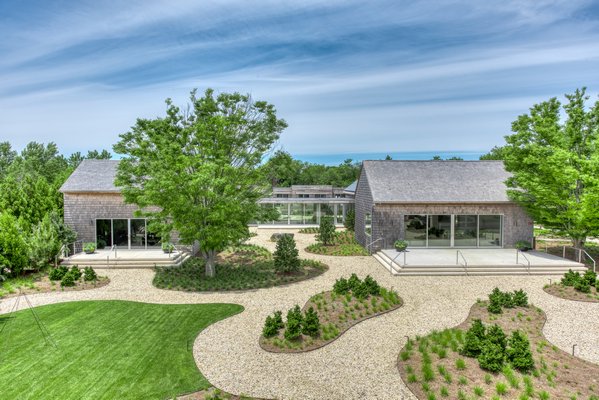 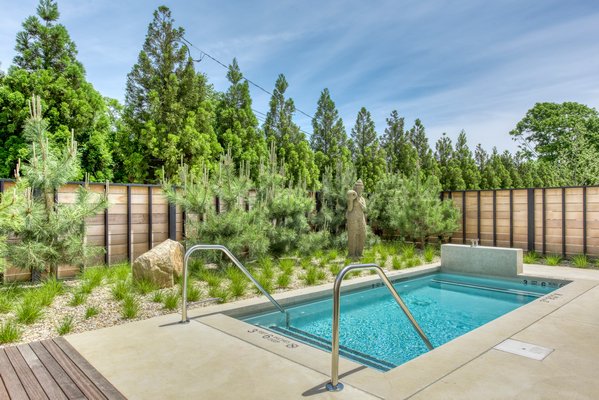 Shou Sugi Ban House, the newly opened destination retreat and spa in Water Mill, is an otherworldly project—a model of harmonious design due, in no small part, to program development, planning, design and execution.

The Shou Sugi Ban House compound is the brainchild of Amy Cherry-Abitbol, a corporate lawyer turned entrepreneur, who spent part of her childhood on the New England coast as well as in Japan. She returned to Japan as an adult and her two sons were born there. Shou Sugi Ban House takes its inspiration from Ms. Cherry-Abitbol’s bond with Japanese culture and reflects the influence of wabi-sabi doctrines using an aesthetic of asymmetry, simplicity, intimacy, roughness and modesty.

When she purchased the 3-acre property with her business partner, Kathleen Kapnick, in 2015 she wanted to do something truly different and simply decided to take the leap and build a wellness retreat. The goal for the retreat and spa was to combine global health and wellness values with innovative programs in a blending of culture and science. She notes, “We’ve created an experience that brings people back to a simple appreciation for their natural surroundings, allows for quiet contemplation and introspection, and fosters meaningful human connection in a tranquil setting.”

When Ms. Cherry-Abitbol initially visited the long and narrow site, it contained a private residence in bad shape on 1 acre fronting Montauk Highway along with two barns on the remaining 2 acres behind; one for rental office space and the other containing a furniture store with an oversized stone Buddha in front. She was quite taken at the time with the main barn, which was destroyed in an electrical fire shortly thereafter. The fire reminded Ms. Cherry-Abitbol of a haiku by the 17th-century Japanese poet and samurai Mizuta Masahide, “Barn’s burnt down -/now/I can see the moon.” And so, the fire became a metaphor and inspired her vision for the center where charred wood is used judiciously for wallboards and other wood accents throughout the building complex. The name for the retreat and spa came from the Japanese shou sugi ban method of charring wood with fire, which can protect it from moisture, mold, insects and even fire. The treated lumber can last 80 to 100 years without maintenance, and far longer if the surface is oiled every 10 to 15 years.

An all-women team, chosen by Ms. Cherry-Abitbol, worked on a collaborative and supportive basis to bring the project to fruition over a four year period. Southampton–based architect Debbie Kropf, A.I.A., first met Ms. Cherry-Abitbol when their children went to school together. Ms. Kropf, who has practiced residential and commercial architecture for over 30 years on the East End, also worked with Ms. Cherry-Abitbol on prior projects. Jodie Webber, the creative director, has been involved in the healing arts for years both as an energy medicine and Reiki practitioner and as a certified aromatherapist. Nela Gregoras has worked on project management/operations and Sat Darshan Khalsa is the director of operations and programming.

As the design program evolved, site plan approval had to be obtained from the Planning Board to locate the parking in front of the spa facing Montauk Highway rather than behind it. The approved plan with parking set back significantly from the road is so well-screened it’s not even noticeable. A change of use variance granted by the Zoning Board of Appeals for the rear 2 acres allowed for the spa and retreat to replace the pre-existing, nonconforming commercial use while the County Health Services Department permit allowed for multiple wastewater disposal systems.

These changes allowed for a master plan that is layered front to back from public space, fronting the highway, to private space, with the studios at the rear of the property. According to Ms. Cherry-Abitbol, the practical constraints of the site itself actually dictated the unique design solution.

For the Shou Sugi Ban House, Ms. Kropf was involved from the beginning in the programming of complex elements necessary to create a holistic compound for health, healing and wellness. This also includes a physical plant geared toward sustainability with solar panels for electricity and geothermal for heating and cooling.

The project is composed of eight buildings, including a new manager’s residence replacing the existing residence, the Main Barn and the Healing Arts Barn, the indoor/outdoor open air Movement Pavilion and Meditation Hall. The spa, whose reception area is clad in shou sugi ban, has five treatment rooms. Offerings include Ashiatsu massage (a barefoot massage technique where the therapist uses gravity and deep pressure on the back of the legs), a chromotherapy shower employing colored lights for relaxation, and dry and infrared saunas along with a steam room adjacent to three outdoor plunging pools. Treatments also include microneedling facials, chakra balancing Reiki, full body deep tissue massage, vibrational sound healing, and cupping with In Fiore, a natural botanical beauty line from Japan. A Watsu pool for shiatsu water massage therapy is situated in a private area next to the Movement Pavilion while the main swimming pool is adjacent to the small studio cottage buildings. Above the spa is a roof deck with views of the entire compound as well as the Parrish Art Museum next door.

What makes the layout of the compound so interesting and intimate is the circulation and the path/space relationships. The plan and arrangement of structures in the landscape is an exercise in solids and voids where building volumes form the courtyards serving as outdoor rooms between the structures. Meandering pathways alongside reflection pools and fountains, are covered with pebbles and grasses and defined by crisp metal edging. Combined with the courtyards, they create the feeling of a dune landscape. Japanese cypress and pines are planted along the perimeters and in beds between buildings, which also help direct foot traffic across the campus.

From the parking area, the Buddha statue sits directly in front of the spa’s entrance and as one walks through its opening the barns appear across the next courtyard. From that vantage point one has no indication that there are wings perpendicular to the barns, which attach to the transparent glass Meditation Hall and create yet another courtyard. Through the Meditation Hall is the fire circle and beyond that three distinct buildings, with four studio units in each, together forming a U-shaped space surrounding the main swimming pool.

After a certain point Ms. Kropf stopped drawing and spent all of her time on the job site coordinating with the trades and consultants. She worked closely on site with the builder, Buddy Wines of RLW4, to develop custom wood details and furniture for the interiors.

Ms. Kropf has certainly pulled everything together through the layering of spaces and the use of transparency as a design element. The articulation of form is achieved through a disciplined use of color, textures and light diffusion. The interior walls of the Healing Arts Barn tea room are covered in a neutral-toned, taupe veneer plaster. Horizontal exterior cedar siding is juxtaposed against horizontal screening and bisque colored steps of sandblasted concrete are used at several grade level entrances while character oak flooring covers many of the public spaces. A monochromatic palette of whites, beiges and neutral tones are found in the guest studios. Half of the studios have Hinoki ofuro soaking tubs and half have modern air massage soaking tubs, while all are outfitted with a gas fireplace and a brise-soleil—a canopy of wood slats—over the sliding glass doors to filter sunlight coming into the room. The slat theme doesn’t end with the studios, however, as Ms. Kropf employs it in the spa building and carries the slats into the railings of the staircase going to the spa’s roof deck. With her cohesive use of design idioms in vernacular modern forms, Ms. Kropf provides the template for a journey of discovery in the healing power of architecture.

Architect Ludwig Mies Van der Rohe’s famous dictum, “God is in the details,” rings true at the Shou Sugi Ban House campus. This compound is a collaboration between a client with an extraordinary vision and a team of specialists, artisans and consultants, all of whom worked together toward an end result unlike anything else. This project is a major addition to the Hamptons design portfolio.