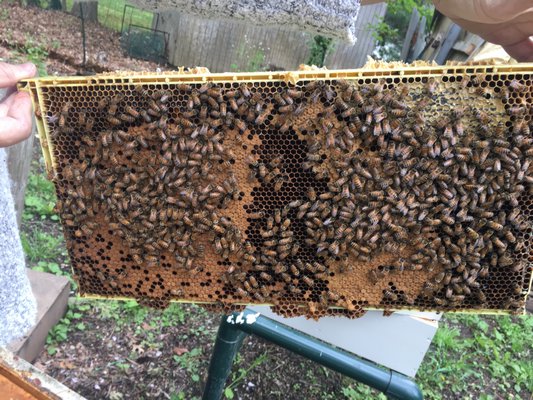 A frame of busy bees. Larvae and eggs in the oval in the middle, honey around the edges. LISA DAFFY 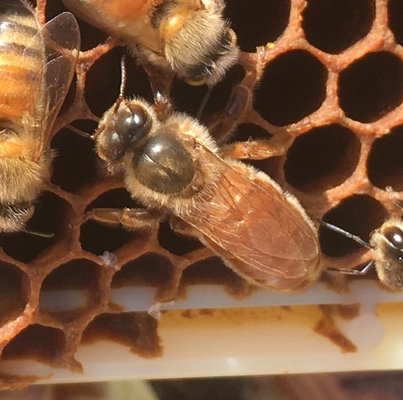 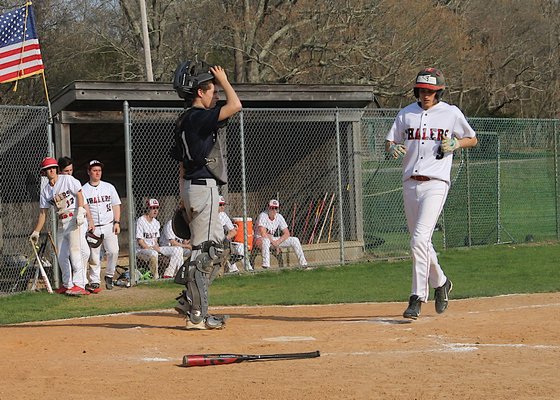 You can see the queen at the bottom, about a third of the way in from the left. LISA DAFFY 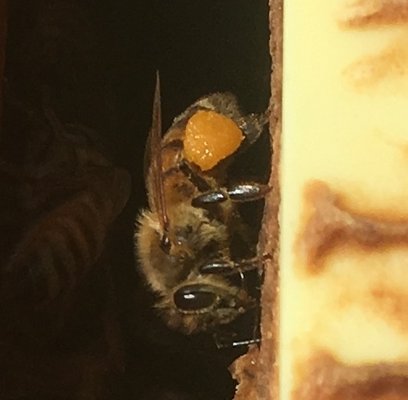 I think it may be time to sign myself up at some sort of rehab clinic, or at the very least join a 12-step program for bee addicts. With warm weather finally here—at least some days—I’ve been happily playing with my bees and watching them revel in the glut of all-at-once blooms that are wreaking havoc with my allergies.

Two of my three hives made it through this miserable cur of a winter, and from what I hear, that’s a better ratio than many people got. A friend in Hampton Bays lost all eight of her hives. So I have been appropriately grateful, watching the girls fly in and out all day, some so loaded up with pollen they look like flying yellow fuzzballs.

I’ve done a deep dive into my two hives and found sleek, healthy queens in both, laying eggs in perfect patterns—frames with a large larvae-filled oval middle, surrounded by capped honey and neighborhoods of pollen. Sections of drone comb tell me they’re sending boys off into the hood to keep the species alive, and the lack of evidence of hive beetles or mites is making me unreasonably happy.

That should be enough. It was enough. Two healthy, happy hives. Then I got a text from my pusher, Deb Klughers at Bonac Bees. “Just a FYI, I’ll have Italian or Saskatraz queens tomorrow if you need.”

Until that moment, I did not need a queen. But what, I now needed do know, was a Saskatraz? Thanks to the internet, I soon learned that Saskatraz bees originated in Saskatchewan, Canada, and are valued for their high honey production, ability to winter over in harsh conditions, pleasant temperament, and resistance to pests.

So maybe I DO need a queen. But then if I get a queen, I need worker bees to start her off in a new hive. Okay, I rationalized, my hives will probably end up swarming anyway, so I may as well beat them to it by splitting them myself.

I could take a few frames of workers (5,000 bees or so), food and larvae from one hive, give them a day to realize they have no queen—but not so long that they start to make their own from eggs in the donated frames—then introduce the Saskatraz to the grateful applause of the leaderless masses.

The Saskatraz, already mated and ready to go when she arrives, starts laying her own eggs and within a few weeks all the bees in the hive will have the characteristics of the queen mum.

I like it. This way I get to keep all the bees and try the new queen variety. And if my bees are going to swarm if I don’t split them, I’m probably not going to get any honey this year anyway. So getting the Saz is a win-win.

Or so it seems, until Deb reminds me that if I add supers (boxes of empty frames) when the hive starts to get full, then the hives can keep expanding without feeling crowded, and they probably won’t swarm. There goes my excuse.

“Do you want bees, or do you want honey?” she asks.

Sigh. I want it all, and I want it now, just like Freddy Mercury sang.

I want bees. Lots of bees. I want enough hives so that one of them is always due for an inspection, because hive spelunking is one of my favorite things to do. I love checking on the queen, marveling at each worker bee’s single-minded focus on the task at hand. I love that I’ve learned to do it well enough that I almost never get stung anymore, that I’m not nervous about being in the hive, and my calm seems to be contagious; the bees don’t seem to mind me poking around either. But every time you open up the hive you disrupt the flow of things and set the bees back a couple of days, so you really can only go into each hive every couple of weeks unless there’s some kind of crisis.

And I want honey, for all the obvious reasons. Honey tastes divine, and eating local honey is rumored to help with seasonal allergies. Mixed with hot water and Irish whiskey, it’s a great tonic for a sore throat. If we harvest honey, then at least I have some hope of justifying the cost of keeping the girls in the style they’ve become accustomed to. And it would be so nice if, the next time someone says, “You keep bees? I’d love to buy a jar of honey from you,” I could actually say yes instead of mumbling apologetically about how we haven’t actually gotten any honey from our bees for the past three years.

Pride won. In the interests of being able to hold my head up and say, “Why yes, you may certainly have a jar of honey from my very own bees,” I decided not to split either hive.

And this year, as God is my witness, we will get some honey from these girls. As for next year? I’ll be buying some Saskatraz queens.