Southampton Home Better Than Par For The Course - 27 East

Southampton Home Better Than Par For The Course 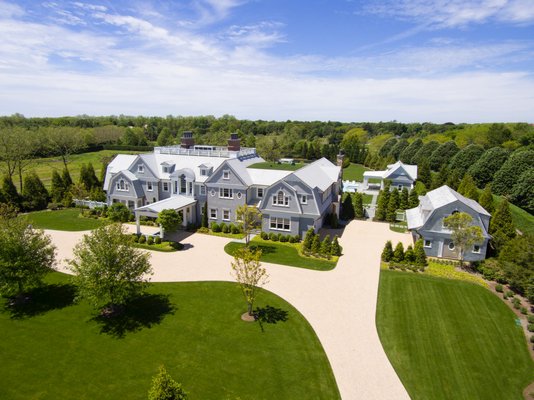 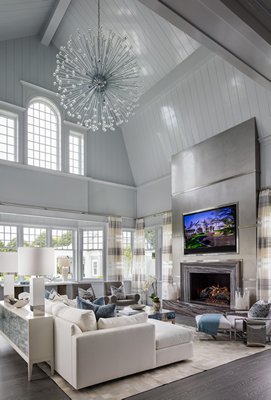 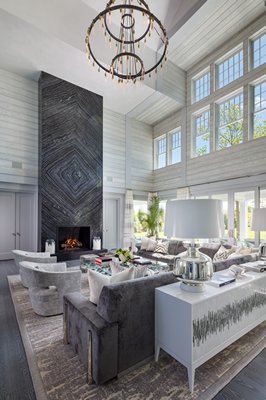 The two-story fireplace can be ignited with an app. COURTESY KEAN DEVELOPMENT Â© Kim Sargent 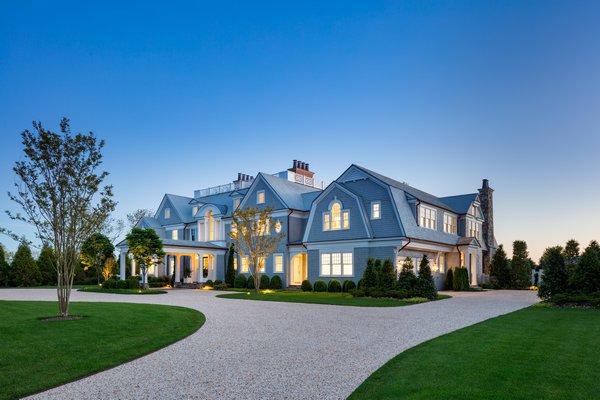 To stay relevant is to keep things fresh. What can you give to those who have had, or seen, it all before?

That’s the prevailing question for John C. Kean, president and CEO of Kean Development Company, based in Cold Spring Harbor. And it’s one he hopes to tackle with one of his latest projects, a 23,000-square-foot shingle-style mansion with contemporary finishings, an indoor basketball court, a screening room—and a putting green on the roof.

The three-level residence on 3.87 acres, located in the Olde Towne development on Wickapogue Road in Southampton Village, strikes a balance between traditional and high-tech modern.

“We want to attract a younger clientele,” Mr. Kean said during a recent interview at the residence, named Summer House. “They want the traditional shingle, but also want something a little more contemporary.”

The interior, designed by Mr. Kean’s daughter, Alden Kean, who works for architecture and design firm Ingrao Inc. in Manhattan, is finished with driftwood, a beachside staple, that retains a gray paint throughout the house’s entirety, offering a modern twist on a conventional feature.

Mr. Kean admitted he was initially worried how her design would turn out in the end. He recalled, “Eventually, she said, ‘I’m not even going to show you the plans anymore. Just wait and see what it looks like,’ But it looks fantastic.”

A two-story imported black marble fireplace rises up the mansion’s eastern wall. The fire can be ignited with an app—in fact, almost every aspect of the house can be controlled with an app, including room-by-room temperature, shades and the propertywide sound system.

Three contemporary paintings by Natasha Law, actor Jude Law’s sister, are scattered throughout the house. “It’s something different,” Mr. Kean said of Ms. Law’s artwork. “You don’t see something like this everywhere.”

Among the other artistic details of Summer House are a number of abstract ceiling fixtures and a transparent kitchen table that mimics the inner workings of a bronze watch.

With a projected price tag somewhere in the mid-$30 million range—Summer House has yet to be listed for sale—the buyer pool for this home, and its ilk, is extremely small. As such, attention to detail is a must. It’s what sells a house, what makes it pop, Mr. Kean said.

But beyond detail, a house at this price requires innovation. In an attempt to stand apart from the real estate pack, Mr. Kean installed a lower level basketball court and movie theater with a ceiling that emulates the night sky. Look long enough and catch the occasional shooting star jetting across the landscape.

And one of Mr. Kean’s proudest features of the two-year build lies in the pool, where lounge chairs sit slightly submerged in the shallow end of the water, a short walk from the sunken fire pit.

“It’s the little things that matter,” he said.

But the house’s coup de grâce is a three-hole putting green on the roof. “Within a year, all the Hampton houses will have this,” Mr. Kean said.

An interesting byproduct of installing a putting green on the roof: no seashells bombarding down from seagulls. “I did Howard Stern’s house over there,” Mr. Kean said, pointing toward the ocean. “And it’s covered in shells. They drop them in order to break them. But they won’t drop on the grass, because it won’t break. The roofs of most houses out here are torn up.”

Mr. Kean, a member of the Cold Spring Harbor Lab Corporate Advisory Board, acknowledges that he often fields criticisms for his high-end builds. In response, he says that such builds help employ the backbone of the community: builders and contractors. “It’s a trickle-down benefit,” he said.

The mansion’s traditional yet unique architecture caught the eye of the Southampton Historical Museum, which recently hosted a benefit dinner there.

Mr. Kean often invites such events into his new developments; the most successful came by way of Michael Milken, a former junk-bonds financier who was charged with violating U.S. securities laws and subsequently became the world’s leading prostate cancer research philanthropist.

“I had never seen anything like it,” Mr. Kean said of Mr. Milken’s roughly $20 million solicitation of total donations in a mere few hours at a Kean-hosted dinner party.

Soon enough, it will be the first private owners of Summer House throwing dinner parties there. Brokers will tour the house in the coming weeks during a kickoff celebration, as the property officially goes on the market.

Winter always comes late to the East End, and for some, thatâ€™s just fine. For ... by Andrew Messinger

With the ongoing housing crisis seemingly getting worse by the week, about 100 people answered ... 6 Dec 2021 by Stephen J. Kotz

Last week, PSEG Long Island and Utilities United Against Scams observed the sixth annual Utility Scam Awareness Week by sharing information on common scams and how to avoid them. National Scam Awareness Week is an advocacy and awareness campaign focused on educating customers and exposing the tactics used by scammers. â€śThe pandemic has created financial hardship and escalated stress levels for many, many people, and that is a perfect environment for scammers to thrive,â€ť said Rick Walden, PSEG Long Islandâ€™s vice president of customer services. â€śThey create the impression of an urgent problem in the hopes that your panic will ... 19 Nov 2021 by Staff Writer

After your lawn gets its last cut before winter, it will be time to put ... by Staff Writer

Thanksgiving â€” or, the unofficial start of the holiday season â€” is finally upon us. ... by Andrew Bowen

The day was already off to a not-great start, even before the angry bird arrived. ... by Lisa Daffy