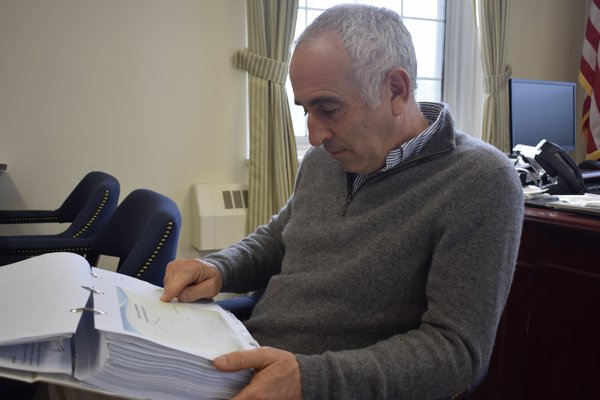 Southampton Town Supervisor Jay Schneiderman has proposed creating a new division within the Department of Land Management—and taking many affordable housing responsibilities away from the Southampton Housing Authority.

The 2017 budget proposes to establish an Office of Housing and Community Development, and to create a new position: a director of housing to oversee the new division.

“It was never clear what responsibilities the Housing Authority was supposed to have,” Mr. Schneiderman said this week. “Basically, [the new office] is our liaison for the Town Board and Planning Department to the Housing Authority. We’ll get involved with the creation of new housing as well.”

Mr. Schneiderman said the new Office of Housing and Community Development would oversee applications for affordable housing, manage the community housing opportunities fund, administer grants for community housing, maintain a housing registry, enforce the eligibility requirements for sales and rentals of affordable units, and manage the lottery programs that award affordable housing opportunities to residents—as well as helping to develop and administer an accessory apartment program, which would allow property owners more ability to create apartments to rent.

“Young people, tradesmen, school and hospital employees, service personnel, and in many cases town employees, can no longer afford to live in the community in which they work,” Mr. Schneiderman wrote in his budget proposal. “This situation places an unfair burden on more affordable communities in the town and increases traffic congestion as employees commute farther distances to work.”

Mr. Schneiderman said another reason for creating the new office was his dissatisfaction with the Housing Authority’s handling of past lottery drawings—the selection process used for affordable units and homes.

“I was pretty critical of the last lottery they did,” the supervisor said, referring to three affordable homes recently built on Bailey Road in Southampton Village. For the three affordable houses priced at $306,000, a $50,000 grant from the town Affordable Housing Opportunity Fund was attached to each house—lowering the cost to $256,000 per applicant. However, Mr. Schneiderman said he was unhappy with the number of applicants for the properties.

“How do you only have [a handful] of people competing for three houses that are worth a million and a half dollars each being sold for, like, $300,000?” he said. “There should have been hundreds of people lining up for that. That’s one of the reasons why I felt it needed more oversight and I wanted to bring it in-house.”

Curtis Highsmith, executive director of the Housing Authority, said there were originally approximately 15 applicants for the Bailey Road houses, which were winnowed down by eligibility requirements and, in some cases, a lack of interest, because the homes cannot be resold at market value.

“For a lot of people, you’re buying an investment of that value, so you want to tap into the equity of that home,” Mr. Highsmith said. “It concerned a lot of people. Mr. Schneiderman wasn’t that happy with the number and felt it should have been a larger number of people in the process—and that’s what we’re trying to do moving forward.

“If he wants to make sure the lottery is done in-house, that’s fine—I want to be concerned about building,” Mr. Highsmith said.

“We have an administrative contract to administer certain programs on behalf of the town, so whatever they want to do internally is their discretion,” he added. “We’re focused on affordable housing in the township. I don’t think of it as a slap in a face.”

Mr. Highsmith added that the Housing Authority hopes to extend its contract with the town for another three years, and that he is looking forward to working with the new office.