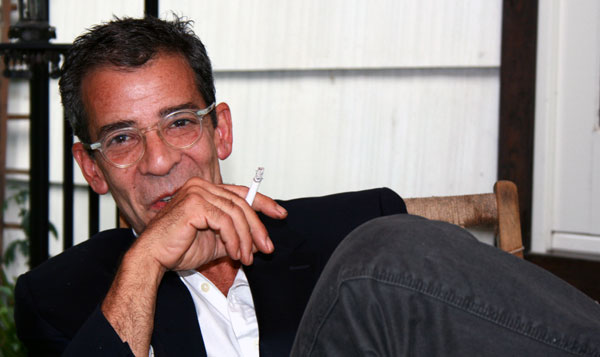 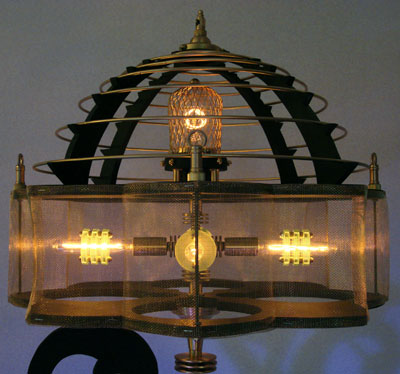 Close up of the crown on Art Donovan's "Thin White Duke." 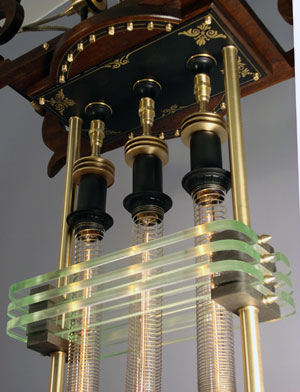 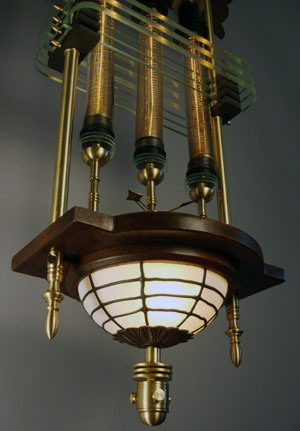 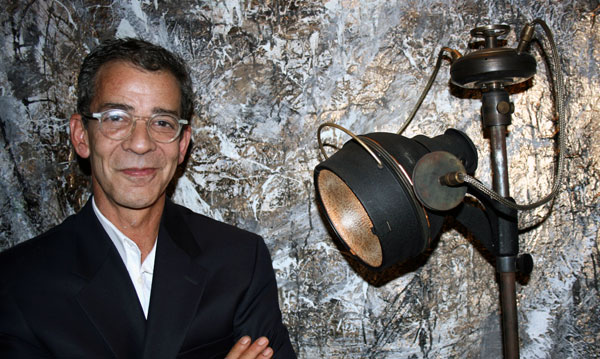 Art Donovan in his Southampton home office with one of his steampunk lighting creations. 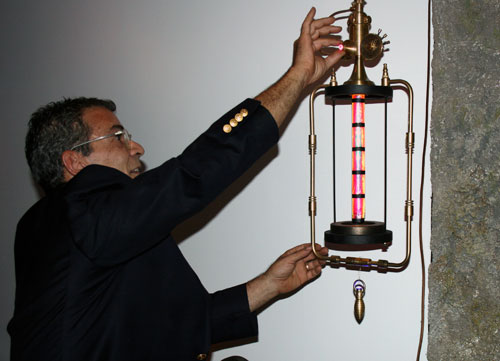 Art Donovan demonstrates the dimmer function on one of his steampunk lights. 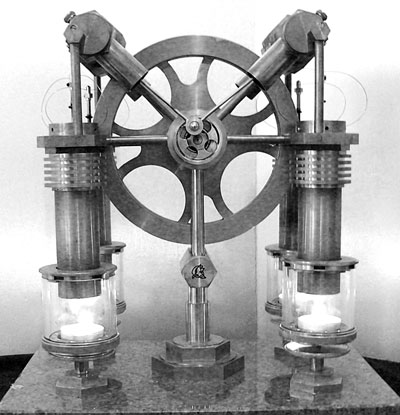 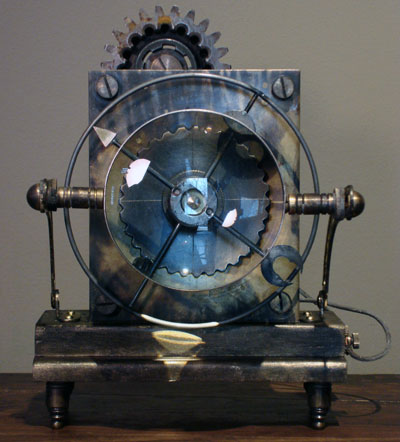 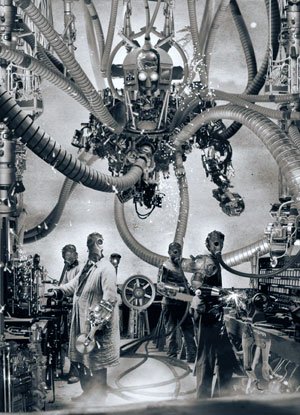 will be featured in a video at the exhibition.

A relatively new and unknown style of art, fashion and design has been simmering beneath the surface of mainstream society and gaining momentum, but “Steampunk,” an exhibition opening in Bridgehampton on Saturday promises to give the eponymous movement its comeuppance.

Southampton lighting designer, innovator and curator of the show Art Donovan describes “steampunk” as a “unique version of 19th century Victorian England—now imbued with high tech digital devices, fantastic steam-powered machines and all manner of surreal, electro-mechanical contraptions that could only have been conjured by a mad, 21st century scientist.” An artist and designer since 1976, Mr. Donovan was introduced to steampunk during a simple internet search on new design styles and he was instantly hooked.

A quick Google query on steampunk will lead to numerous websites featuring fascinating and often functional designs. Some are pure invention, built only from found objects and unassuming yard sale treasures, while many others are modifications of existing objects and machines, including computer equipment, electric guitars and amplifiers, taxidermy, motorized vehicles, toy guns, action figures, watches and a plethora of household items. Redesigns can be as simple as adding a faux finish of rusty metal, wood, leather and bronze, but the most successful items have added or adjusted functional elements, demonstrated by some of the artists in Mr. Donovan’s show.

One of the most respected and prolific steampunk designers, Richard “Datamancer” Nagy’s wide range of work has a stalwart internet presence and his technical and aesthetic achievements include “The Nagy Magical-Movable-Type Pixello-Dynamotronic Computational Engine,” a custom computer, desk and housing made from a 1920s King Radio cabinet. A 1908 Underwood typewriter is wired into the computer to function as the keyboard, and a peripheral flatbed scanner is disguised within a custom-made leather book. Datamancer tops it off with a wooden mantel clock and small wall sconces with fabric lamp shades are attached to the sides of the main housing for added visual effect. He describes his effort as a way to “retrocentrically create a false historical heritage for the modern computer.”

Datamancer created a new computer modification for Saturday’s show. Mr. Donovan had yet to receive it last week and he intends to keep it under wraps until the exhibition. He said the designer will likely debut the new piece online, where most steampunk visionaries show their work and Mr. Donovan found his inspiration. “The beauty of the things are just breathtaking,” Mr. Donovan said, adding, “I started looking at it and lost my mind, it was unbelievable.”

The steampunk aesthetic, defined by brass pipes and gears, cogs, copper, dark wood, leather and what Mr. Donovan calls “fire-breathing machines of antique locomotion” can be seen in such films as “The City of Lost Children,” “Brazil,” and “The Golden Compass.” It is evoked in the phantasmagorical stories of Jules Verne, H.G. Wells and Mary Shelley, but steampunk as a genuine movement began with a few inventive pioneers sharing ideas via the internet.

Mr. Donovan’s background in design and technical skill gleaned from more than 30 years fabricating eccentric chandeliers and lighting objects helped him assimilate quickly into the upper echelon of steampunk designers. His creations grabbed the attention of the steampunk community’s most esteemed artists and designers and it was through those connections and his status as regular online contributor to steampunk message boards, that Mr. Donovan was able to convince the genre’s top creators to come out of the shadows and participate in his exhibition.

“None of the artists in this show ever thought of exhibiting before,” Mr. Donovan said, reiterating that most steampunk designers share their work with others in the tight-knit online community, but most, if not all, build their visual and mechanical masterpieces from a place of purity, not ego. Steampunks, in fact, typically include detailed step-by-step instructions, complete with photographs and plans so others can re-create their do-it-yourself designs.

Some, including Jake Von Slatt—the “godfather” of steampunk design—won’t sell their work at all. On Saturday, Mr. Von Slatt will exhibit his very first steampunk design, “Clockwork Steampunk Stratocaster,” a Fender Stratocaster guitar modified with a brass gear motif. The designer is well known for his own computer modifications and Mr. Donovan said Mr. Von Slatt exemplifies the dignity of the genre with a willingness to share his techniques.

On Mr. Von Slatt’s website, SteampunkWorkshop.com he offers a tutorial, complete with videos, for building one of his labor-intensive custom keyboards. The IBM keyboard is housed in brass and felt, with typewriter keys replacing the standard—decidedly not steampunk—computer keys. Maintaining his credo not to sell his work, the designer went so far as to allow Mr. Nagy, or Datamancer, to copy and experiment with his designs and he even gave the fellow steampunk his blessing to sell the keyboards, asking nothing from him in return.

Early in his design career, before starting custom lighting business Donovan Design with his wife Leslie Tarbell Donovan, Mr. Donovan worked for Donald Desky, the designer of Radio City Music Hall in Manhattan. Radio City was Mr. Desky’s masterpiece of art deco design and even that building, which opened in 1932, had industrial and artistic elements that could be characterized as steampunk. Mr. Donovan’s steampunk creations are influenced by a variety of eras, styles and regions of the world, but like punk, the movement borrows from many sources. “They’ve repurposed everything,” he said of the steampunks.

Mr. Donovan said throughout his career he has rarely drawn plans for any of his designs, but he had to make blueprints for his steampunk work, some of which took more than two months to build. Larger pieces, like his “Siddhartha Pod,” are one of a kind, but others can be re-created with only slight differences, depending on whether his components are unique found objects or fabricated. “Siddhartha Pod” is a large and ornate hanging lamp fashioned from brass, wood and glass. Three long, tubular bulbs and a dome light are set on a dimmer, simultaneously creating ambience and anachronism.

The steampunk exhibition includes artists and designers from all over the world as well as one other local artist, along with Mr. Donovan. Sag Harbor resident and printmaker Bethany Peters said Mr. Donovan introduced her to the genre and it fit well with both her scientific and artistic mind. Ms. Peters is helping organize the show and has created several two-dimensional prints as well as a sculptural piece that tells temperature, time of day and tide level based on barometric pressure.

Mr. Donovan is confident the show will be a smash hit and promises this new way of looking at architecture and design will become part of the popular lexicon. “Artists are rarely accepted at first, they’re renegades,” he said, though Mr. Donovan added, “Like every movement, it’s going to go commercial.” He said steampunks are not afraid of the coming popularity of the aesthetic and they will continue doing what they’ve always done.

Steampunk influenced objects, accidently or otherwise, can be seen everywhere one goes once the aesthetic is grasped, but Mr. Donovan believes design will be more purposefully and directly shaped by steampunk very soon. “Steampunk Home,” one of Mr. Donovan’s favorite blogs, pulls from catalogues, magazines and other sources to show steampunks where to find items that fit the fantastic Victorian aesthetic, sometimes without any modification. From simple brass countertops to light fixtures from Pottery Barn or metal Ikea shelves and cabinets, sometimes steampunk can be found in the most mundane of places.

“The majors are going to get hold of it,” Mr. Donovan said, though he noted they would not reproduce the strength and energy of what the pioneers showing on Saturday have built. “When a movement begins, you get the full strength of the philosophy and uniqueness,” he said, but soon it will be digested by companies into mass market items. Despite the somewhat cynical prediction, Mr. Donovan understands that this is how the world works today.

He believes the “world’s first exhibition” of steampunk will be remembered and noted that no matter what happens “true talent is undeniable,” and it will be on full display in Bridgehampton on Saturday.

“Steampunk” will be open from 5 p.m. to 9 p.m. on Saturday, August 16, and will remain through August 24 at the Hamptons Antique Galleries at 2546 Montauk Highway in Bridgehampton.