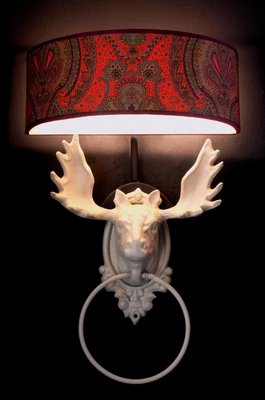 For football fans, the Super Bowl is about the game. But for millions of others, it’s the halftime show and the commercials that are the most entertaining part of the annual National Football League’s sportsfest.

That’s certainly true this year for Southampton’s Art Donovan, whose personal highlight reel for Super Bowl XLVIII definitely included the “Epic Night” commercial for Bud Light. The Gothic-style lighting of the Steampunk artist and owner of Sage Marine lamps was featured in the 2-minute ad spot.

Aired during the first quarter of the game, the commercial was staged by set decorator Debra Schutt, an Oscar winner for the film “Revolutionary Road,” and was created by the advertising agency BBDO. The spot was filmed in January in the  Meatpacking district in Manhattan and featured a number of Mr. Donovan’s handmade Steampunk, Deco and Artisan lamps, which were used exclusively to illuminate the downtown hot spot where the young commercial lead first meets a girl who takes him out for one wild night.

View the commercial online at youtube.com/watch?v=gkkvqldyycw.