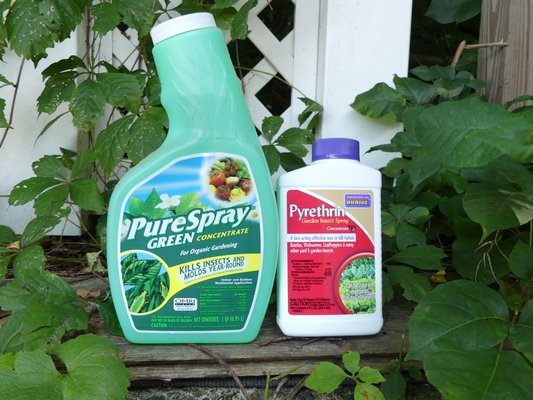 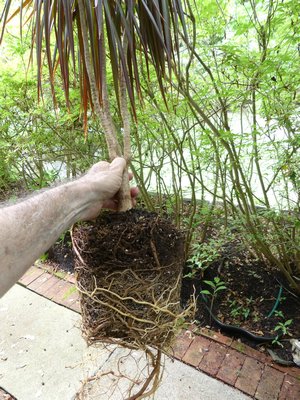 PureSpray (left) is a mineral oil that can be sprayed on many plants for control of a wide range of insects including scale and mites. It’s organic, but read the label as it cannot be used on all plants. The pyrethrum concentrate (right) is a very effective contact insecticide with no residual effects. However, this brand contains a synergist that makes if more effective but also means it is not organic even though the pyrethrin is. Never apply this on hot, sunny days when the temperature is above 80 degrees. 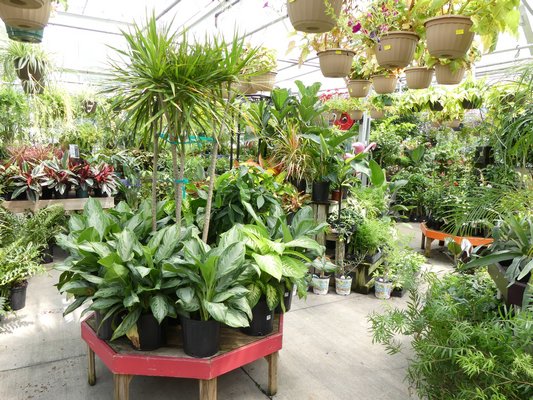 Many garden centers are having sales on house plants as the end of the summer season approaches, and they need space for their fall plants. There are great bargains to be found, but inspect the plants for insects and, once home, see if they are repotting candidates.

PureSpray (left) is a mineral oil that can be sprayed on many plants for control of a wide range of insects including scale and mites. It’s organic, but read the label as it cannot be used on all plants. The pyrethrum concentrate (right) is a very effective contact insecticide with no residual effects. However, this brand contains a synergist that makes if more effective but also means it is not organic even though the pyrethrin is. Never apply this on hot, sunny days when the temperature is above 80 degrees.

This may seem to be a strange time to be talking about houseplants with all that’s going on outside, but this is actually prime time to pay some attention to those plants that you keep indoors in the cooler months and maybe out on the summer patio.

It’s also time to head out to the local garden centers to shop for some real houseplant bargains. But first, to the plants you already have.

Right now, your ficus, palm, orchids and all your indoor dwellers (even if they’re outside for a vacation) should be thriving but not necessarily blooming. However, this is also when insects (both inside and out) are thriving. If you scout your plants now and use some simple control methods, you can bring your plants back indoors or keep them indoors without the fear of infestation. There are basically four insects to look for: aphids, whitefly, mites and scale. The last two not being true insects, but for the sake of simplicity that’s where we put them.

As I noted last week, aphids are usually green though they can vary in color. In most cases they will be found on flowers or at the growing tips of the plants. They’re social insects so they usually occur in groups. If you have plants outside and see ants scurrying over them, this is a pretty good indication that you’ve got aphids. Small infestations can be handled with forceful but fine sprays of water while I think the best treatment is with a pyrethrin spray. Either will dislodge or kill the aphids on contact, but neither has any residual effect, so treatment should be repeated every five to seven days for a few weeks.

Whitefly is a bit more difficult to control as they are small and take flight instantly when you touch or bump a plant. Nearly always on the underside of plant foliage, they’re most likely to be found on herbs, hibiscus, coleus and a few other plants. The easiest way to detect them is to shake the plant. If you see whiteflies take flight you should take some action. In this case, water will be useless, but once the whiteflies settle down you can use a pyrethrin spray. Starting from the bottom of the plant and moving to the top, mist the undersides of the foliage, remembering that only those insects that you contact with the spray will be killed. And since new eggs will be hatching for several weeks after you’ve started your control program, you need to spray every few days, lightly, for about two weeks. Never spray on a very hot day and never in full sun. Other insecticides will also work, but this one is pretty reliable.

Scale and mealybugs are quite a bit harder to control and require persistence. You may also want to consider if the plant is really worth saving. In this case, simply spraying them with a pyrethrin-based insecticide is next to useless as the coating on each of these insects makes them pretty impervious. The safest but not the easiest way to get rid of mealybugs is to twirl them off the plant using a Q-tip dipped in rubbing alcohol. This method can take months and you need to be completely diligent in order to get every mealybug, but your persistence will pay off.

As for scale, the only method I’ve found to be effective is using an oil treatment as this smothers the otherwise armored insect. You need to use the right oil though, so ask at your garden center for a very light year-round oil (such as SunSpray ultrafine oil) that can be used on houseplants. Follow the directions, make sure you plant isn’t sensitive to the oil and lightly coat the plant, bottom to top. You’ll need to make at least three applications one week apart. Easily done outdoors, nearly impossible indoors.

Spider mites are difficult to see and once you’ve noticed the damage they’ve done a plant is usually beyond hope. However, if you can get your plants outdoors or into a shower and spray them with a forceful mist of water every other day for 10 days (if you have spider mites) or every week or two if you only suspect you have mites, they’ll be gone in no time. Water and high humidity are their nemeses.

And if you’re keeping houseplants outdoors for the summer, constantly check the bottom of the pots for slugs and snails. You don’t want them in your pots, and you don’t want them hitching a ride into the house at the end of the summer. Organic baits for these two work well.

This is also the second chance for repotting, the first being in early spring. A good sign that a plant needs repotting is when you seem to be constantly watering it and it still needs more the next day. Dropping lower leaves can also be a sign that a plant may be pot-bound. The other sign is when you knock it out of its pot and the root mass is tight and hard all around. Repotting now gives the plant a chance to adjust to its new home, establish new roots before the colder and darker days set in and it will also allow the plant to grow.

As a very general rule, I’d pot up at least 1-inch larger in diameter than the existing pot, but don’t go overboard. If a plant is over-potted the new soil mass will retain too much moisture and you can rot the roots by keeping them constantly wet. Use a potting soil that is peat based (also called a peat-lite mix) and never use soil from your garden. However, you can mix a tablespoon of good garden soil into your mix as this will add beneficial microbes to your potting soil that is otherwise sterile.

This is also the right time to do some pruning and to take some cuttings. Prune to reshape or to encourage new growth, but know what you’re doing because not all plants take to pruning, such as palms and asparagus ferns. Cuttings can be taken and rooted from plants such as coleus, jades, ficus, geraniums and cane plants such as dieffenbachias and dracaenas, where the tips can be rooted and canes can be cut into 2-to-3-inch sections, laid on moist sand or potting soil where they will root and send up shoots that become new plants when fully rooted and the sections recut.

Tip cuttings of plants like coleus can be rooted in moist sand or moss if they are kept out of the sun and misted during the day or kept in a plastic bag until rooted. Leaves of African violets and other gesneriads including Streptocarpus can be rooted easily at this time of the year also. Just Google “leaf cutting propagation” and you’ll find both text guides as well as videos.

There are some great buys now at local garden centers for those who want to begin or expand their houseplant collections. I saw some incredible begonias and coleus recently as well as some really nice banana plants, orchids and plenty of others both large and small. Remember these plants are thriving now and easy to get home and repot—not like in December when you say, “I should have bought some of those plants last summer.”

Want your house full of living color and plant life in the dead of next winter? Yes, winter will come, and yes, it will be cold and snowy—I promise. Revive what you’ve got and go get what you need, so next winter they can bring you a smile. Keep growing.