Surchin: Eero Saarinen Marched To The Beat Of His Own Drum - 27 East 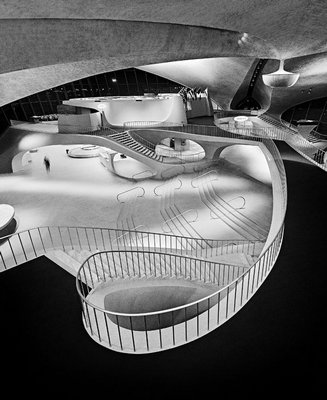 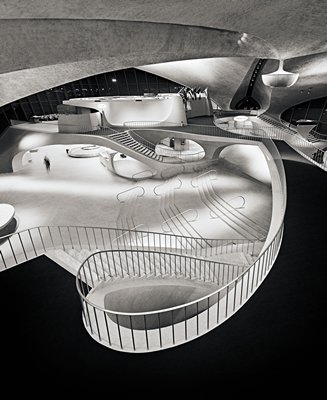 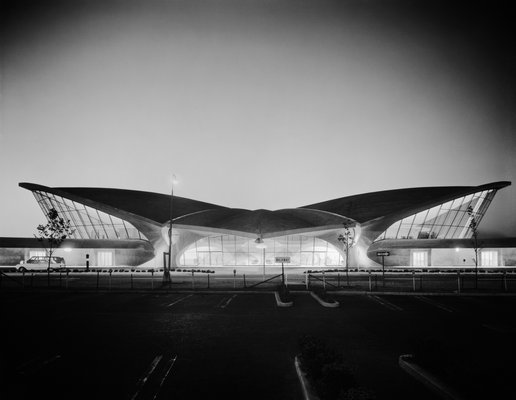 Finland-born architect Eero Saarinen (1910-1961) marched to the beat of his own drum.The story of his life and the arc of his work are poignantly chronicled in director Peter Rosen’s PBS “American Masters” film, “Eero Saarinen: The Architect Who Saw the Future.” Screened June 1 at the Parrish Art Museum in Water Mill, the film includes personal commentary with associates, friends and critics.

Also included are archival interviews with Eero and his second wife, New York Times art critic Aline B. Saarinen—grandmother of this paper’s publisher, Joseph P. Louchheim. The film was co-presented with Hamptons Take 2 Documentary Film festival and shown in conjunction with the exhibition “Image Building: How Photography Transforms Architecture,” at the Parrish through June 17.

Saarinen’s cinematographer son, Eric, the director of photography, tours Eero’s projects on a journey of catharsis to understand a father who he once reviled for his lack of accessibility, abandoning him, his sister and mother, the sculptor Lilian Swann, for his work, and then leaving them for Aline, “who understood Saarinen’s work and embraced it.”

Peter Rosen had to convince Eric to come on board for the project, and he finally agreed with the hope of finding closure with his father. His narrative provides the emotional storyline for the documentary.

The film, shot in 6K, employs the latest drone technology, with 8-foot blades, to highlight his father’s projects in ways never seen before. Eric Saarinen filmed his father’s buildings by matching the focal length of the camera lens to reflect the way viewers would see a structure in real life, as opposed to the exaggerated scale created by wide-angle lenses.

Additionally, he collaborated on award-winning furniture designs with Charles Eames. His famous Tulip chair and pedestal table are still much in vogue today.

Son of the renowned Finnish architect Eliel Saarinen (1873-1950) and Loja Gesellius, a sculptor, Eero grew up at Hvitträsk, the home and studio compound embodying Scandinavian forms, designed by his father, just outside Helsinki. As a child, Eero would draw on the studio floor while his father sat nearby and designed buildings. Young Eero grew up in a cultured home where he was exposed to his parents’ friends: Jean Sibelius, Maxim Gorki, Gustav Mahler and Carl Milles, among others.

The family immigrated to the United States in 1923 for professional reasons, as Eliel had been hired to design and direct the Cranbrook Academy of Arts in Bloomfield Hills, Michigan. In 1929, Eero went to Paris to study sculpture at the Académie de la Grande Chaumière, but years later he related, “It never occurred to me to do anything but follow in my father’s footsteps.”

He returned to the states to study architecture at Yale from 1931 to 1934. After touring Europe on a traveling fellowship and working in Finland, he joined his father’s architectural practice in 1936 and became partner in Saarinen, Saarinen and Associates in 1947.

In 1948, Eero won the design competition for the Gateway Arch, but the telegram was erroneously sent to Eliel, and the office held a champagne celebration. Two hours later, a competition representative called to correct the error—and Eliel opened more champagne to celebrate again.

The jury called Eero’s design “a profoundly evocative and truly monumental expression.” It was viewed as the gateway to the West and symbolized America’s expansion. The three-sided arch clad in stainless steel, in reality, is a 630-foot-tall catenary curve.

The Gateway Arch was photographed by the drone from all angles, allowing the viewer to see the breadth, scale and context for what has become one of this country’s most iconic monuments.

Eliel Saarinen died in 1950, and Eero, in the 11-year period after his father’s death, would go on to produce a stunning portfolio of projects.

While Saarinen had trained during the Modern period, he was neither a Canonical Modernist nor a reactionary against Expressionism, as members of the canon were wont to be. They threw out all past history and focused ideologically on building for the Machine Age. Form was supposed to be an honest expression of a building’s structure.

Saarinen approached his projects as objects of personal expression and in so doing still created unique buildings that were both idiosyncratic and distinctive but never lacking in symbolic content. He was also able in many of his projects to incorporate nature into his designs.

Colleagues and critics such as Vincent Scully looked at him with condescension. Of Saarinen’s later buildings, he wrote, “Through them runs the insistent American instinct for simplistic and, in this case, spectacular solutions … They give the impression of having been designed in the form of models for dramatic unveiling at board meetings and of having never been detailed beyond that point.” Others felt that his buildings weren’t intellectually vigorous enough.

With the TWA terminal and other commissions, Saarinen did, in fact, build big models—some large enough to walk through. These were, in essence, study models, which could be altered during the design development process. Today, the use of computer modeling has all but replaced the physical model, although a real model is very often easier for a client to comprehend. With the TWA project, Saarinen delivered one of his most organic and expressionistic buildings, which connoted man’s desire to conquer gravity as well as the excitement for travel.

In his design for the Dulles Airport, the curved roof hangs from cables that are supported on concrete piers at different heights on opposite sides of the building. According to the critic Paul Goldberger, “Saarinen wanted his buildings to engage emotionally.”

In the Deere & Company building, Saarinen employed steel to symbolize the strength of the Deere products. At the Ingall’s Hockey Rink, cables supporting the roof are hung from a curved concrete arch running the length of the building. The ceiling, clad in wood, curves and creates a space that conveys an almost Asian feel for the winter sport of hockey. The entrance features an overhang resembling a Norse prow, effectively terminating the end of the arch.

Eero Saarinen died after surgery for a brain tumor in 1961 at the age of 51. After Eero’s death, Aline devoted herself to making sure that his unfinished buildings, including TWA, Dulles and the CBS Building, were completed.

Eero Saarinen admitted that he would like a place in architectural history. He was posthumously awarded the American Institute of Architects Gold Medal.