Take A Few Days Off For Leaf Peeping Season - 27 East

Take A Few Days Off For Leaf Peeping Season 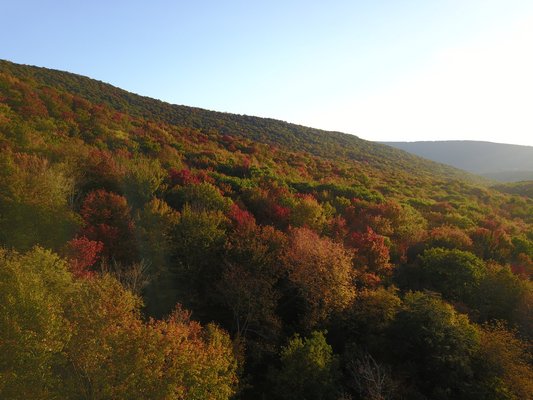 The changes start as subtle oranges, yellows and reds in a variety of tree species on September 29 at about 2,000 feet in the central Catskills. These colors change daily and can last for a few days or a week before the leaves drop. ANDREW MESSINGER 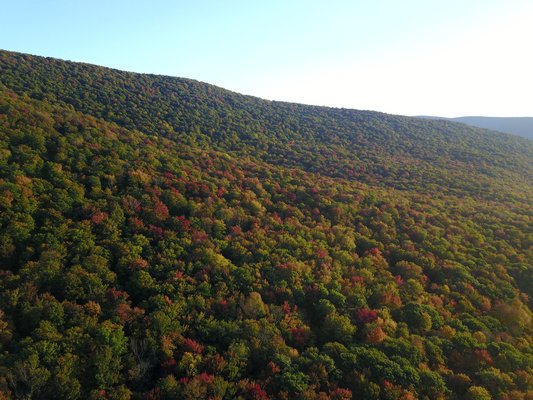 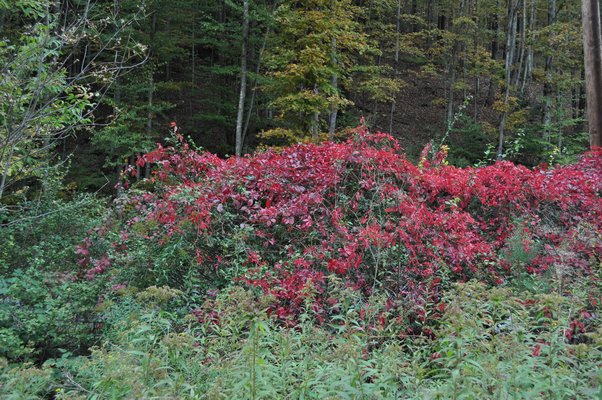 Virginia creeper climbs trees, shrubs and utility poles and is a source of red foliage from the Hamptons up through New England from early to late October. ANDREW MESSINGER 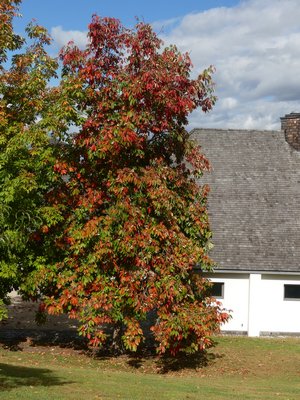 A variety of horse chestnut in Westchester began to turn in late September but an identical tree to the left only shows minor color change toward the top. ANDREW MESSINGER 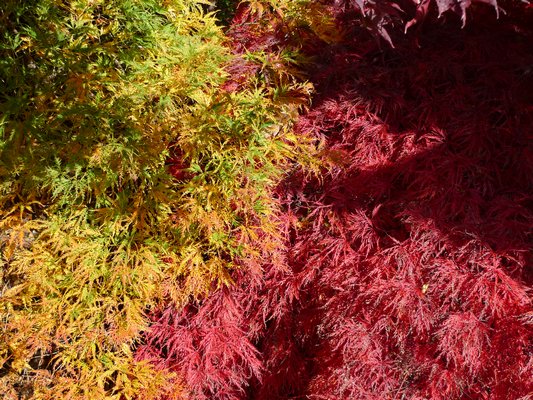 One family of trees, the threadleaf Japanese maples, can provide vivid and changing colors in Hamptons gardens toward the end of October and last for weeks. ANDREW MESSINGER 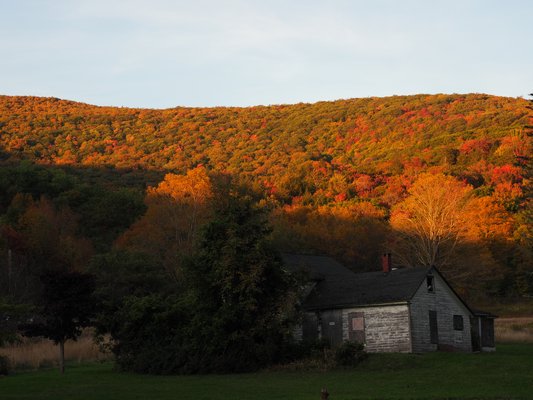 Light plays an important role in forest colors. As the sun sets, the lower forest shows muted colors but the angle of the sun makes the colors a few hundred feet higher like a patchwork quilt spread over the mountain. ANDREW MESSINGER

It’s always hard for me to leave my garden, even for a weekend. But I learned early in my years out here that Hampton gardeners tend to be isolated. It’s pretty natural as we do live at the end of an island, and it isn’t exactly easy to get away.

But it is important for all of us to see other areas, other gardens and other garden centers and nurseries if only to see what else is out there. And now — now that things have slowed slightly and because it’s also peeper season — maybe it’s time to take a few days off?

In planning your fall foliage outing, two days is the minimum. If you have the luxury, five days would be great. The colors are changing quickly to our west and north, and since there’s a bit of a drought in progress the fall colors can be quite spectacular. There’s already a little bit of color in lower Putnam and Dutchess counties, but as you move further north the colors intensify because it’s colder and fall sets in earlier. If you head into Ulster County you can take Route 28 from Kingston and head west where in just a half hour or so you’ll be 2,000 to 3,000 feet higher and the colors there are already showing lots of oranges, browns and some reds. A maple here and there will have spectacular color, and trees with Virginia creeper and poison ivy growing up their trunks will have strands of brilliant oranges and reds. A bit lower down you’ll see the foliage of the sumacs yellowing and falling off, revealing this shrub’s fiery red flame-like flowers at the tops.

Now it’s a patchwork of color, but it only takes a few cold nights up there for the reds to show up and in a blink they can be gone. Last year the most brilliant colors lasted for only three days, but this year I think things will last longer. There are also a number of fall festivals throughout New England and the Catskills such as the Catskills Lark in the Park from October 5 to 14 and you can find out about that festival online at catskillslark.org.

But there are lots of options and literally hundreds of places to stop along the way to taste freshly pressed cider and the long list of beers, ales and spirits that are being brewed and distilled along your journey. Actually, there’s been a revolution and evolution of new agriculture, especially in upstate New York where hops and hemp are becoming key agricultural crops and small farms are turning out cheeses, vegetables and other goodies. And there’s a revival of small family farms that hasn’t been seen in decades.

A fast weekend trip will keep you closer to home, and you’ll only get a tease of the scenery and tastes. For longer trips, however, you can take the ferry from Orient or Bridgeport and travel up into New England via the interior roadways. If you’re heading up from Manhattan or Long Island, you can take the Saw Mill River Parkway up through central Westchester and at its northern terminus it links with Interstate 684. Towards the end of 684 you can continue north on Route 22 through the countryside all the way up to Massachusetts and then either head north into Vermont, west into the Hudson River Valley or east into more of New England. If you take 684 then 84 east to Danbury you can get on Route 7 and head up through the hills of Connecticut up to Massachusetts.

If you head west at the end of 684 you’ll travel on Interstate 84 West and slowly climb to around 1,000 feet where the color changes will begin to be more spectacular. At this point you can get on the Taconic State Parkway and head north for an incredibly beautiful ride through the countryside all the way up to the Massachusetts border where, again, you can head west back into the Hudson River Valley or East into Massachusetts and the areas around Lenox, and Great Barrington where there’s a great garden center called Wards Nursery.

If you take 84 further west instead of getting off on the Taconic, you’ll come to the juncture with the New York State Thruway in Newburgh. If you take the Thruway north you’ll pass some incredible apple and pear orchards between Newburgh and New Paltz where you drive past hundreds and hundreds of acres of fruit trees. There are local farm stands selling these fruits or you can stop at Adam’s Fairacre Farms in Newburgh or Kingston where they sell all the local apple varieties that come right from the nearby orchards as well as fresh apple cider doughnuts — a personal weakness. Another place to visit might be the Minard’s Family Farm where you can pick your apples right off the trees for about $22 for a half bushel, about 60 apples (minardsfamilyfarms.com) or choose from up to 20 varieties at their farm stand.

The Thruway will take you up to Albany with some great vistas along the way or you can get on any of the 9s (as in 9W) on either side of the Hudson, which are slower roads that take you up parallel to the Hudson through the smaller villages that date back to the Dutch patroons. At Albany you can you can get on the Adirondack Northway that takes you up into the North Country and eventually the Canadian border. Keep in mind that the later you go and the farther north you head the less you’ll see because in northern New York, Vermont and Massachusetts fall colors peak early and end early. There are a number of fall foliage guides, but a really great one that’s updated nearly daily for New York State can be found here: https://bit.ly/2nCeFab.

If you don’t want to drive but you still want to see the foliage and be a peeper, Amtrak has trains with observation cars from Manhattan to Montreal that can be quite spectacular. While you’ll be able to see some local color, your tasting and shopping opportunities will be limited.

And for an extended trip, consider heading north on one route then returning south on another, possibly through the Finger Lakes region. You’ll find different species of trees on these routes, which means different colors in different places at different times. Keep in mind that heading north is not the only consideration. Altitude is also important. As you climb every 1,000 feet in your drive, the temperature goes down 3 degrees Fahrenheit. So when you’re up at 2,000 feet it’s 6 degrees cooler than at sea level and fall is happening that much faster. There’s a plus to this though, and that’s that as you drive along at lower elevations, say 500 to 1,000 feet in a mountainous area, you can simply look up to the higher altitudes and see the more brilliant colors and patchwork that Mother Nature has put together.

Then there’s the problem of peepers envy. This happens when you return to the East End and you want all those brilliant colors in your landscape. Well, dream on. While we have some of the most beautiful beaches in the world, one of the prices of living on the East End is that we are limited to the species of trees and shrubs that do well out here and still give great fall shows. It’s not impossible though, and I’ve seen some Japanese maple gardens out here that are incredibly spectacular in October when it comes to color and color changes, but it is a challenge. Keep growing.