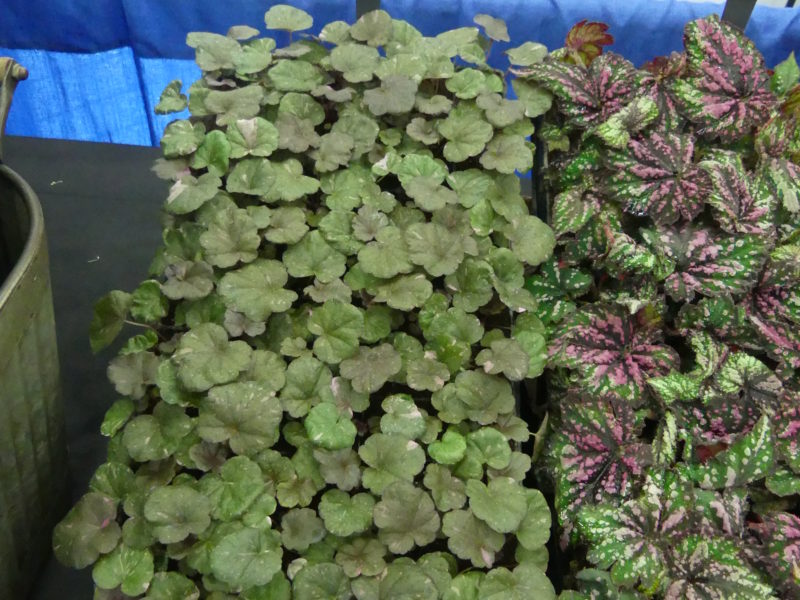 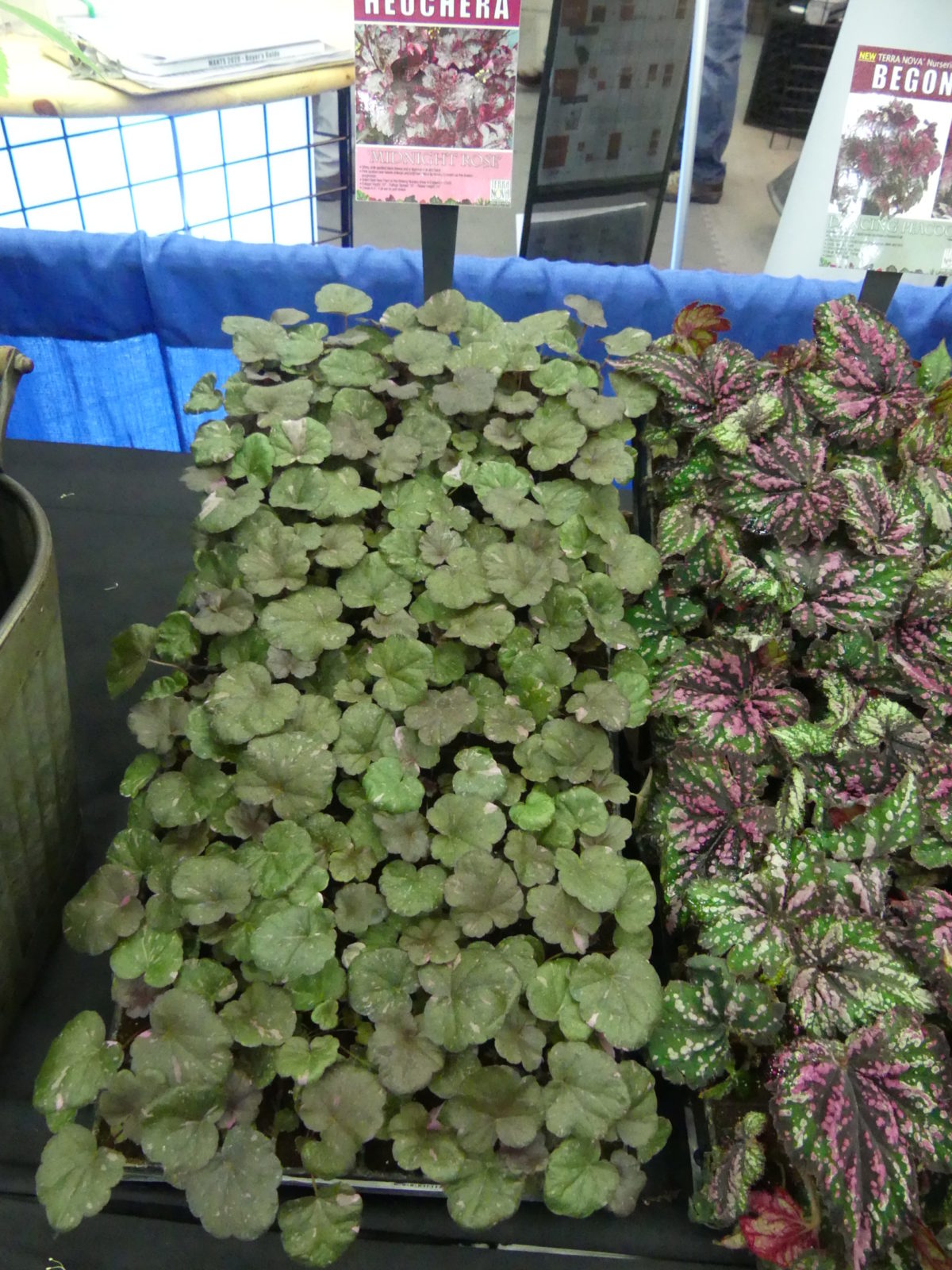 The propagation flat on the left contains about 60 “bumped up” Heuchera clones that started as just a bunch of tiny cells smaller than a dime. From this stage, they are ready to go into nursery containers, continue to grow, then be sold to the retail market. A flat of cells like this one might cost a grower a dollar a cell, but by the time you buy the plant in a gallon pot its cost has gone up to $15 or more. Everyone in the growing and supply chain takes a cut. ANDREW MESSINGER 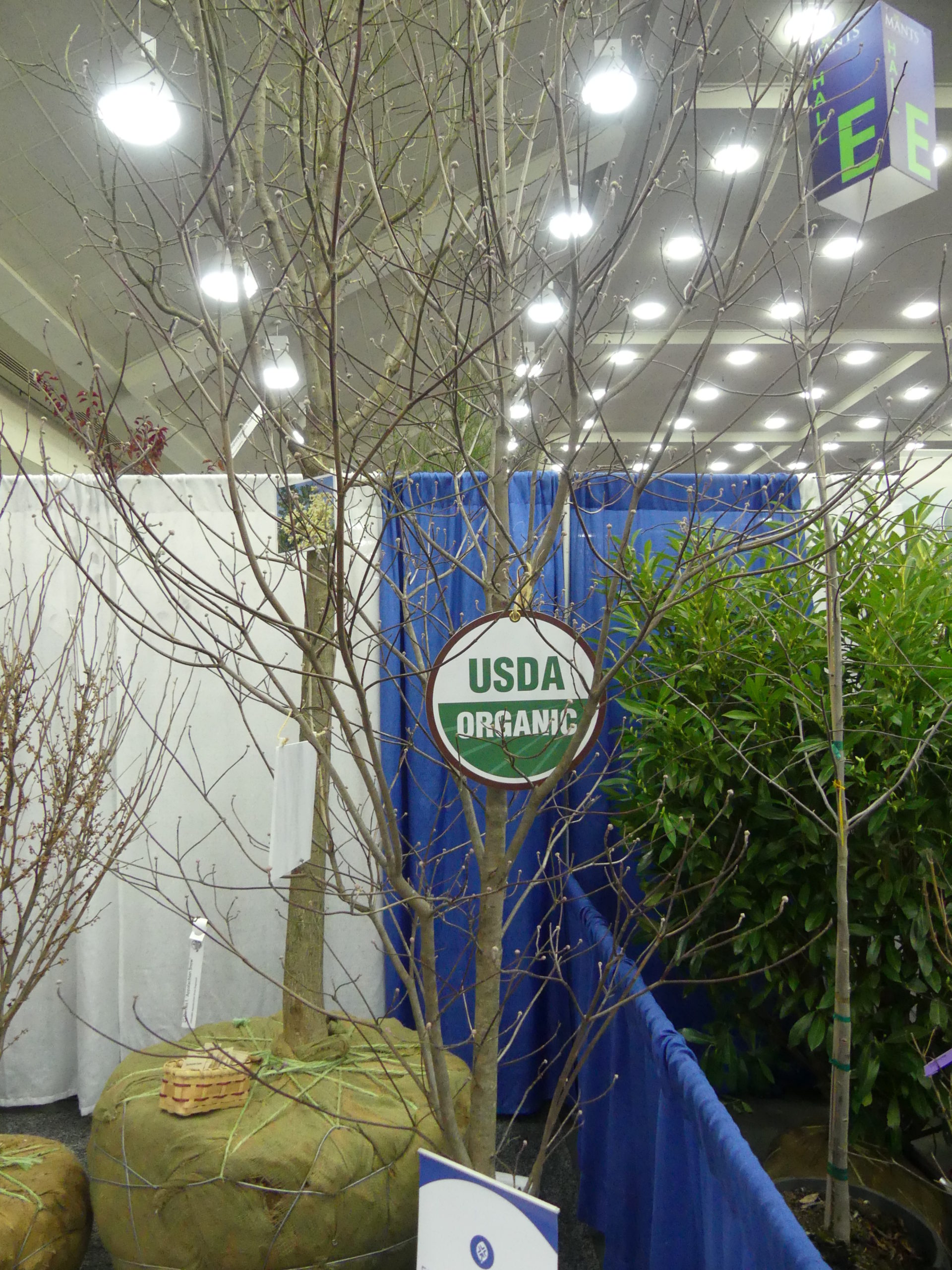 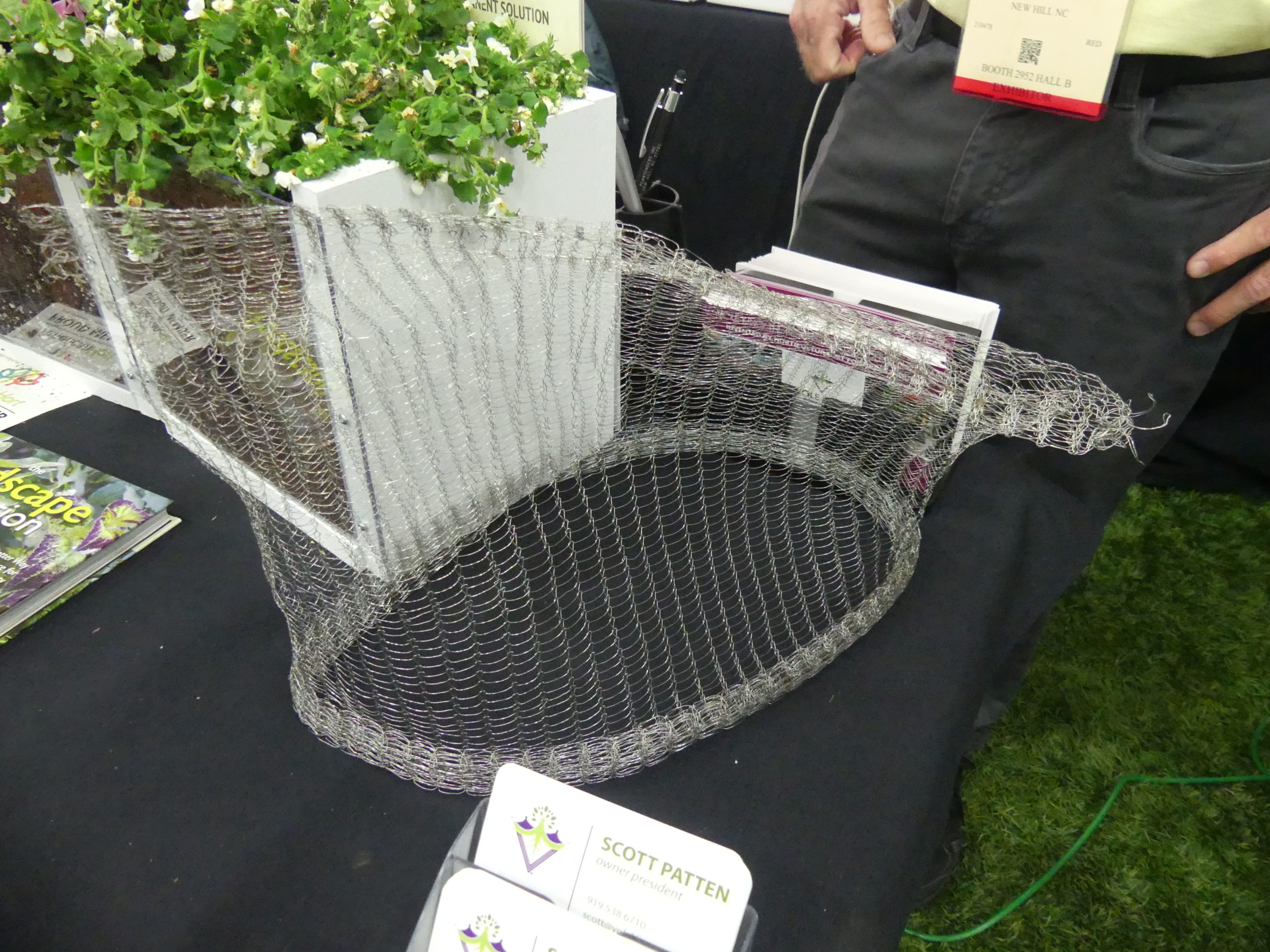 Vole King is a stainless steel mesh product that can protect your roots and bulbs from marauding voles and squirrels. It’s available on rolls or as bags in several sizes. ANDREW MESSINGER 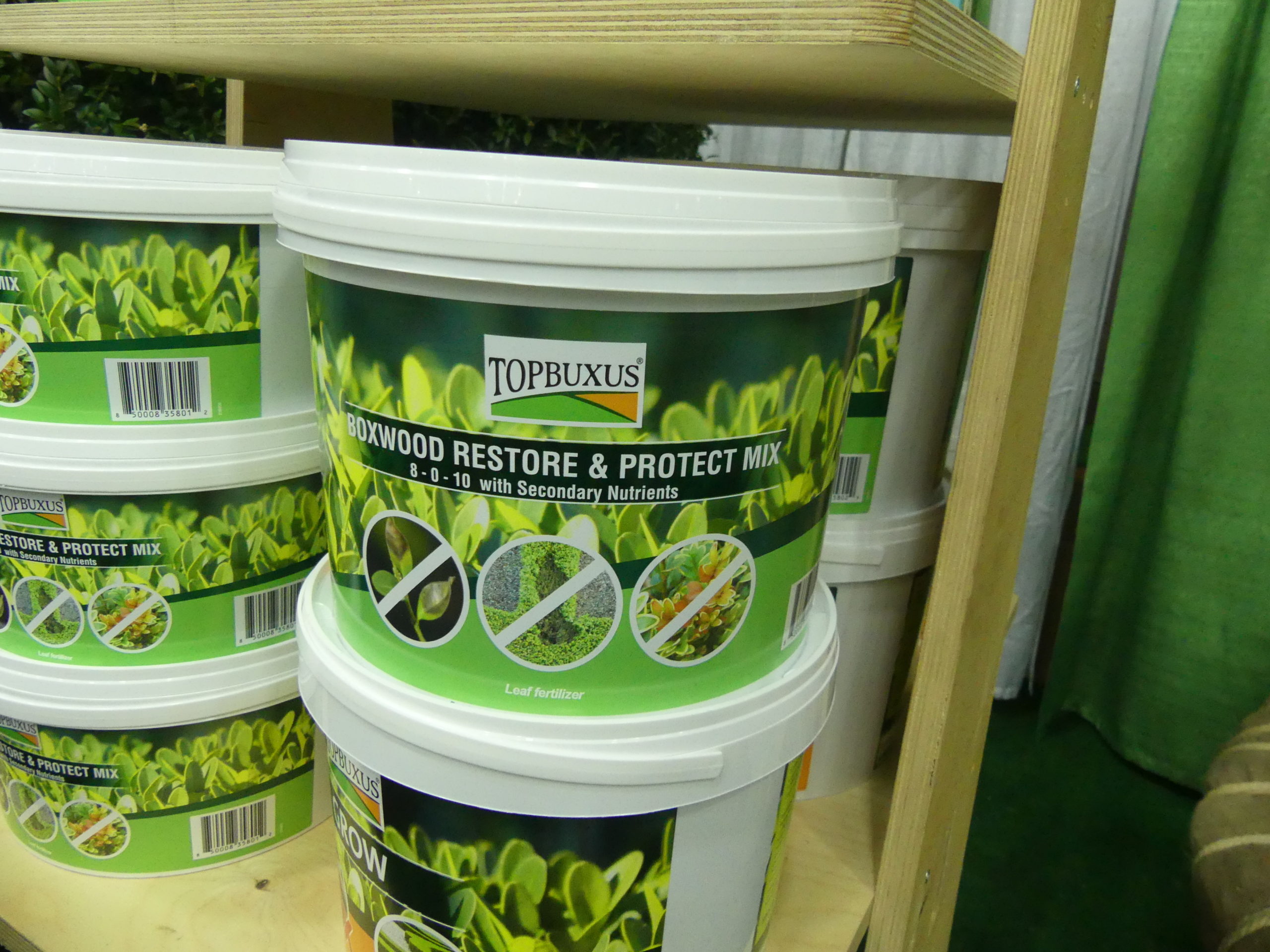 Touted as a treatment for boxwood blight is Boxwood Restore. The real deal or garden snake oil? Is it backed by science or hearsay? ANDREW MESSINGER 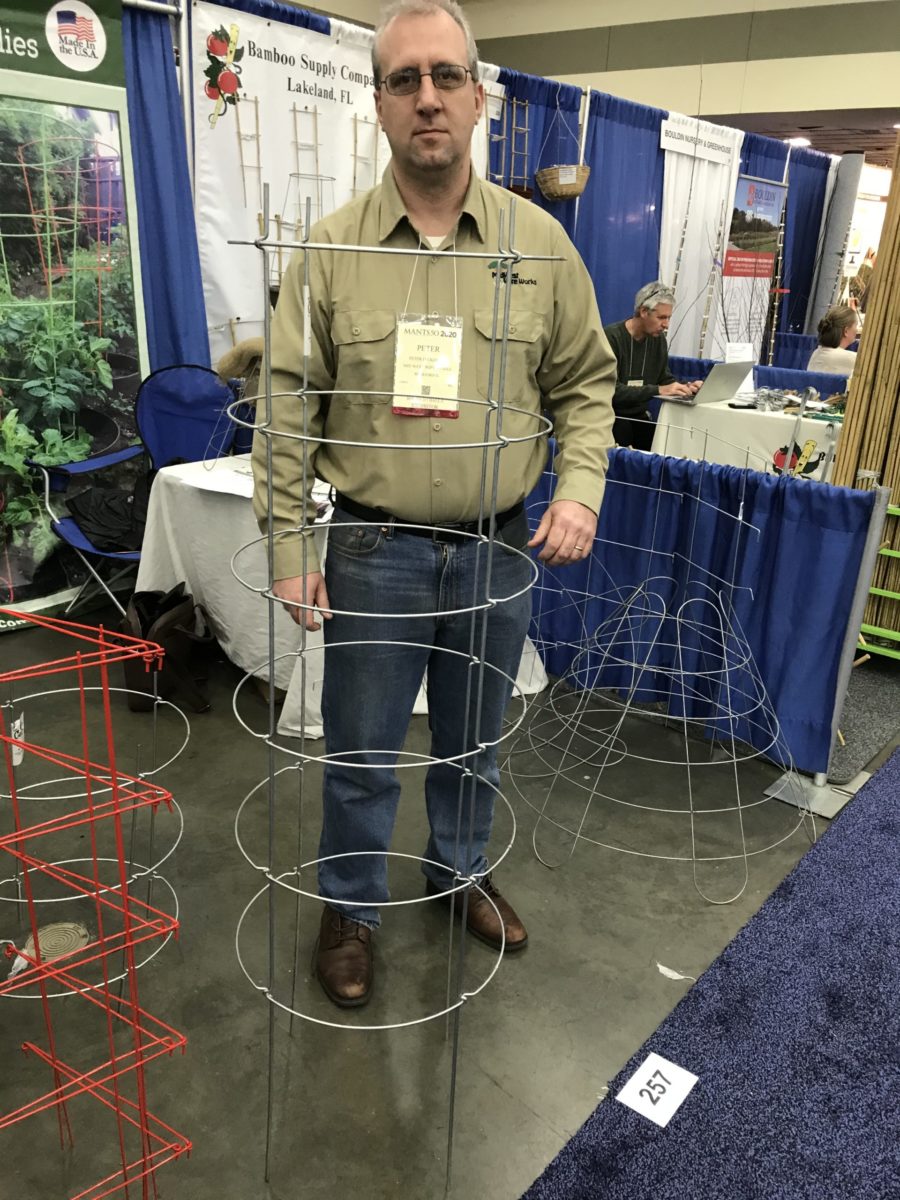 This tomato cage from Midwestern Wire Works appears to be your run of the mill tomato cage until it’s folded flat. ANDREW MESSINGER 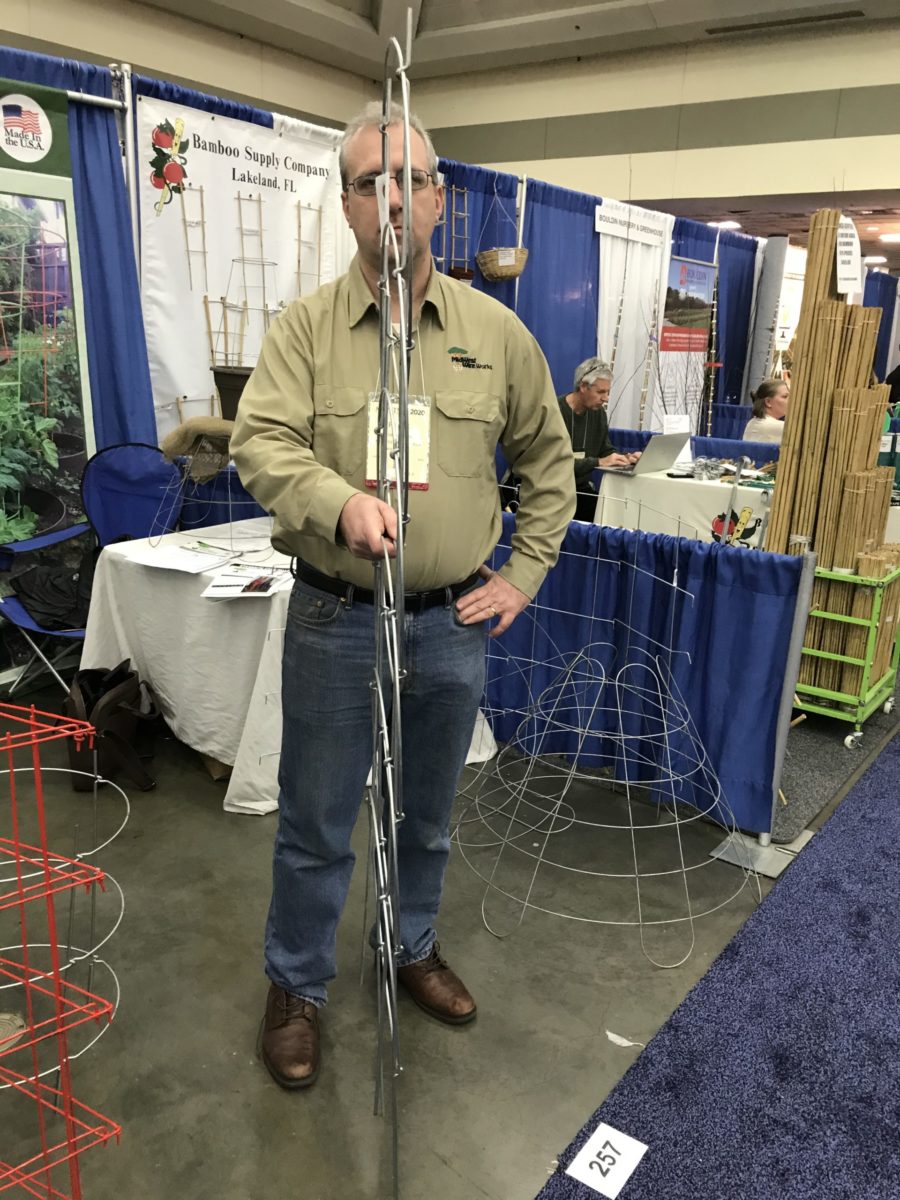 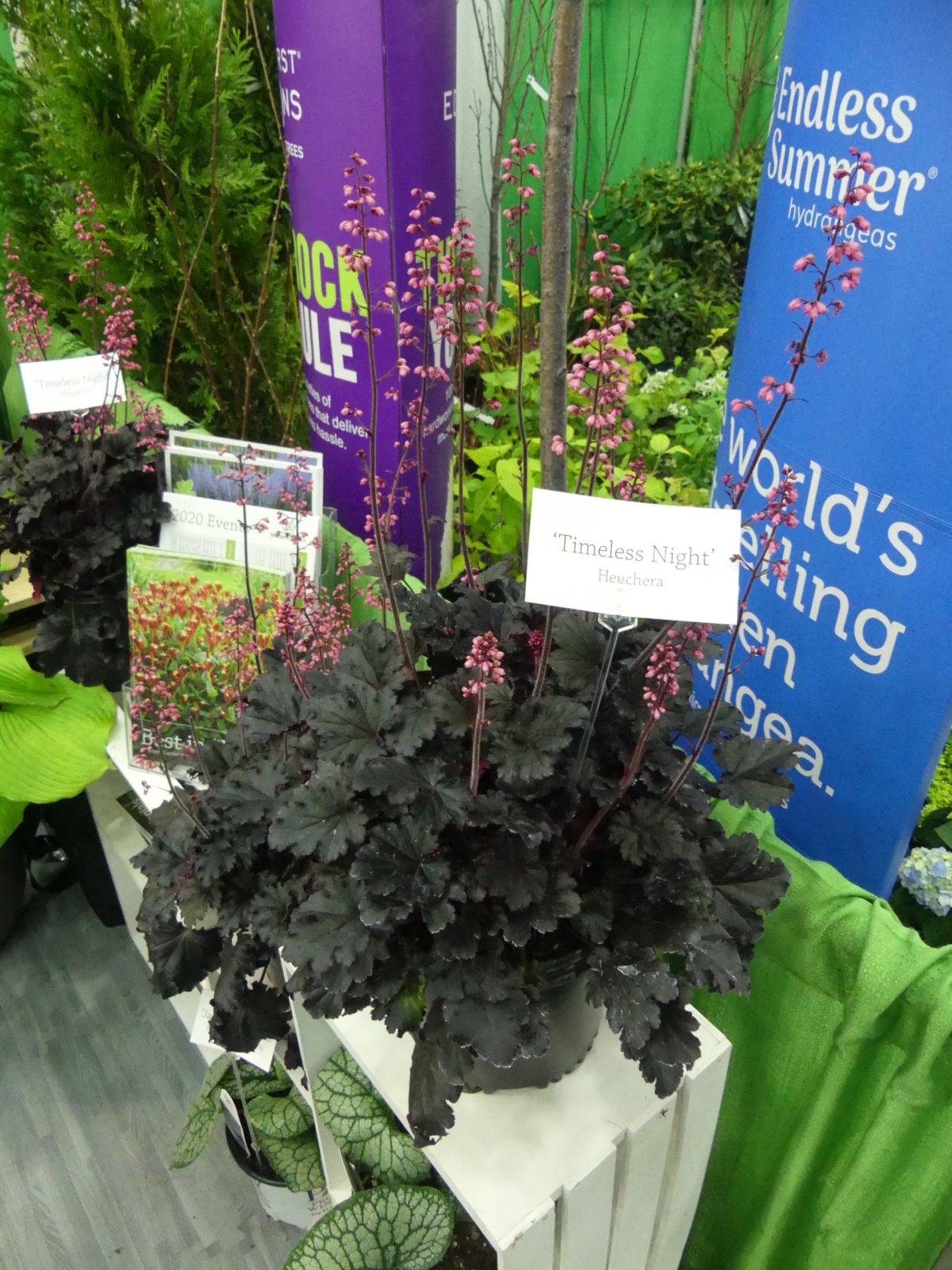 Heuchera Timeless Night was introduced by Walters Gardens last year and will show up in garden centers this year. It has dark foliage that's almost black with medium pink flowers. It will perform similarly to other Heucheras in the "Berry Timeless" group. ANDREW MESSINGER 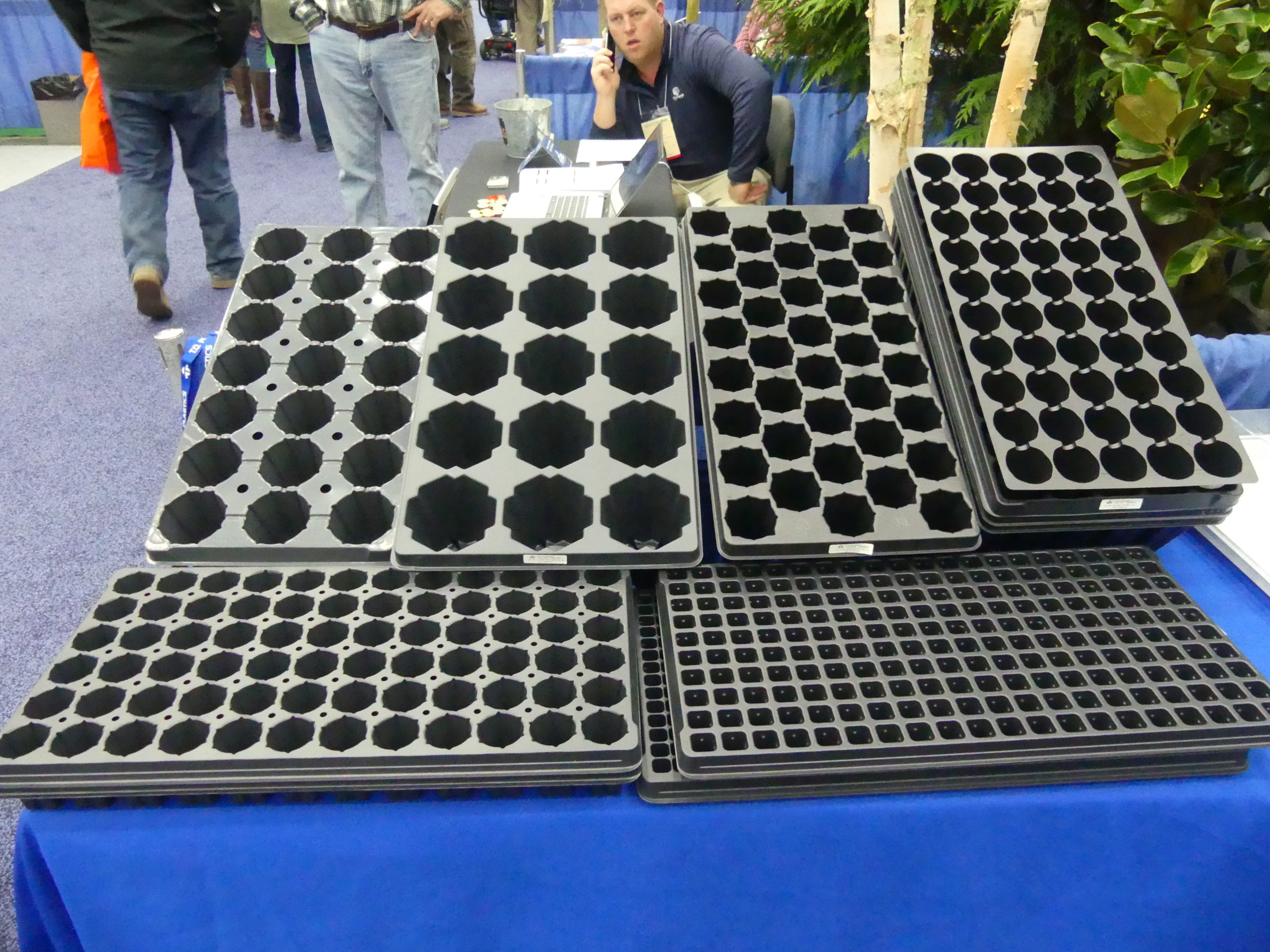 These cell trays, or “plug” trays, are used in the propagation of cell-based clones to rooted cuttings. The plug trays (lower right) are common for annuals that end up in the larger plastic cell we buy at garden centers. ANDREW MESSINGER

Several decades ago I attended the Farwest Nursery Trade Show in Portland, Oregon. It’s the largest trade show for the nursery business on the West Coast, and it pretty much blew me away with hundreds of vendors and plenty of plant people to talk to and ask endless questions of.

There used to be numerous trade shows like this for the green industry all over the country, but the 2008 recession hit the nursery business very hard. Since then, the shows at the Concord Hotel upstate and the New England Grows show in Boston have closed down. One show, however, the Mid-Atlantic Nursery Trade Show held every January in Baltimore, is going strong, and I was able to get down there this year. This show is so successful that it has a 10-year waiting list for new vendors to get on the floor.

It was a whirlwind two days and the first time in years that I was able to take time off and meet not just with growers, nurserymen and garden center owners but also about 30 other garden communicators. This is the largest show of its kind in the country. With well over 250,000 square feet of display space, you could scream at the top of your lungs at one end and not hear even the faintest peep at the other end. Just walking up and down each aisle from beginning to end would take close to 90 minutes without any stops. There were vendors displaying from 47 states and Canada. There were more than 960 vendors, and over three days more than 12,000 attended. It was pretty remarkable.

I left with about a million things I wanted to tell you. I’ll be lucky if I get to half of them. But I think we should start at the beginning. Where do the perennials, trees and shrubs that you buy at garden centers and big box stores come from?

The vast majority of the plants start as a group of cells, in the form of tissue-cultured clones, to small sticks or cuttings rooted in tiny pots. From this initial propagation round they are potted up, or “bumped” into larger and larger pots, until they reach a salable size, and then they are shipped to the marketer, wholesaler or directly to a garden center or retail nursery. Each plant may have been repotted five to 10 times, and the entire process can take 20 to 30 weeks in the case of annuals and perennials, to five, 10, even 20 years in the case of larger trees and shrubs.

There were growers showing their smaller material grown in cells of an inch in diameter or so who then sell them to “up” growers. There were propagators who will take your newly discovered plant and turn it into a million more plants in a few months then sell them back to you so you can sell them again. I figured that, in a little less than two days, I had seen well over a few million plants and, much to my surprise, most were the same as the rest and there was little in the way of innovation when it came to new and exciting tree and shrub introductions. Unless, of course, you get off on yet more new hydrangeas, more heucheras and more echinacea.

There was a panel discussion the second morning that included various growers of different size wholesale operations. Some other garden writers and I had discussed issues we had with the industry in general the night before, and when it came time for Q&As for the panelists one of those questions came up. “Do you follow your plants once they leave your business or do follow-ups to see how they survive and do once they reach the end consumer?” We also wanted to know if the growers trial any of the plants they grow to know how they do over time. The general answer was “no”!

This is a big problem for me and probably for you and all horticultural consumers. Sometimes the failure rate of container-grown plants once they are at their final planting location can be astounding. One year I planted five container-grown Rhododendrons. One survived. The growers’ reluctance or lack of enlightenment with regard to trialing plant material is astounding. One grower tried to walk things back a bit by saying that he always takes plants out of stock to put in his landscape at his home. But that’s not really a trial in which plants are distributed to various situations in several hardiness zones and tracked for several years to see how they do. The nursery industry in general should be admonished for this lack of care for the end consumer, and retailers should demand more of the nursery trade and their organizations with regard to trials that are routine in the annual and perennial side of the business.

Another issue, one that was not broached, is the industry’s use of plastics. Very few growers do what is called “field growing.” Most production these days is done above ground in plastic pots. Millions and millions of plastic pots. There have been some efforts to recycle nursery pots, but they still burden our environment and our ability to recycle them. How many garden centers have you seen with signs saying, “We will gladly take your plastic pots for recycling”? Other issues were persistent labor shortages and the federal government’s failure to address the issue of legal, migrant farm and nursery labor.

My last rant is about the lack of innovation and new plant material. Yes, it can take years and years to bring a new plant to market, but as one panelist lamented, “I’m still growing the same things I grew 40 years ago, and those are probably the same plants my father grew when he owned the business.” Shortsighted? Indeed. And who’s to blame? The industry and the colleges of agriculture and horticulture that support the industry. Or don’t.

I ran into George Bridge at the show. George is a Maryland nurseryman known for his large specimen plants and especially his boxwoods. George is essentially the boxwood man. On one large estate I managed we had installed several hundreds of thousands of dollars’ worth of large boxwoods from George. Most had to be removed two years ago due to boxwood blight. Now George, the consummate salesman, is the sole U.S. distributor for a product that he claims will stop boxwood blight in its tracks as long as it’s used “as directed.”

The product is called Boxwood Restore and comes from Topbuxus USA (boxwoodblight.com). George has lots of testimonials for the product, and he claims it’s widely used in England with excellent success. A look at the label tells us that it’s basically a fertilizer, but George kept on alluding to a “secret sauce.” Check out the website and see what you think. Just keep in mind, though, that there is no known cure for boxwood blight, just treatments that hide or mask it. There also doesn’t seem to be any scientific trials of the product. Nonetheless, it’s much safer than the chemicals currently being used for boxwood blight, if it works.

I found three other notable products: A tall tomato cage that’s round, but folds flat. Ever try to store a dozen conical tomato cages in a shed or garage? Problem solved for about $50 for three (midwestwireworks.com). Second is a stainless steel mesh that can be used to protect plant roots and crowns from vole damage. Can’t grow hardy lilies or tulips because of voles and squirrels? This product can be your chance to fight back and succeed. It’s available in rolls for custom use or as mesh bags that buried bulbs and roots can be planted in. Check the product out here, voleking.com, but remember when using them that a plant like an Asiatic lily needs a hole to let the stalk grow though. Experiment and improvise, but this may be the trick.

Lastly, there is Bee Safe 3-in-1 Garden Spray. I’ve never used it so I can’t endorse it, but it’s got an interesting history. The guy who “invented” it claims it’s been incredibly successful in Florida where there are way more insect issues than up here. It also claims to have been university tested. It’s organic, OMRI certified and can be effective against soft-bodied insects like aphids, mites, hemlock woolly adelgid, thrips, whitefly and several types of scale. You can find it at Walmart and Home Depot or get more information at yourplantdoctor.com. Keep growing.

It’s time to take your holiday gifting for your favorite gardeners seriously, and this week ... 19 Dec 2019 by Andrew Messinger
Sign in to comment