Three containers are beginning to lose some of their industrial feel. COURTESY CHRISTIE ANDERSON 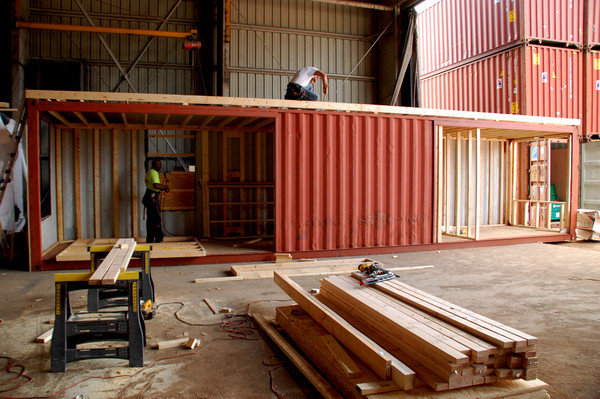 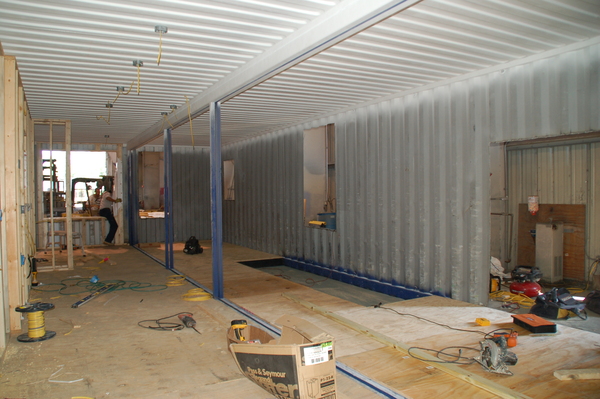 A shipping container about to be "upcycled" in Jacksonville, Florida. COURTESY CHRISTIE ANDERSON 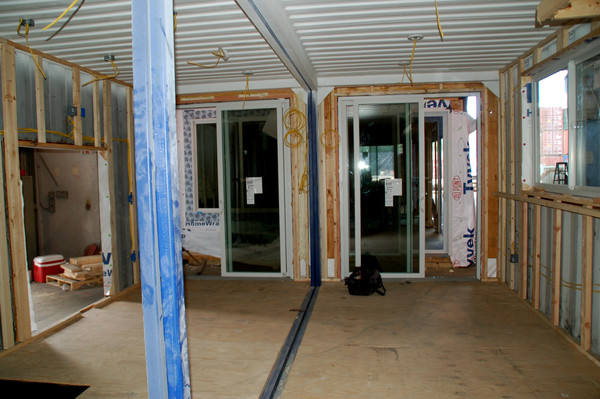 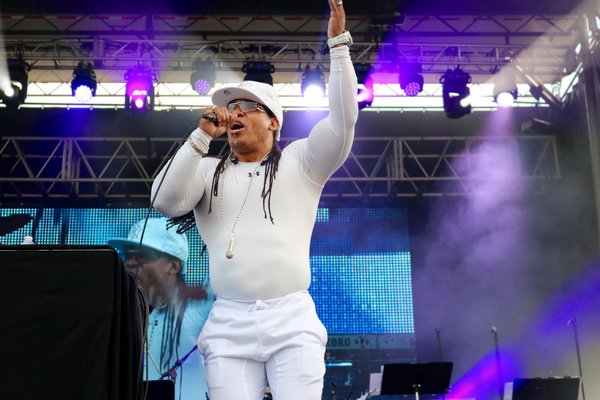 The corrugated steel interior before "upcycling" is completed in Florida. COURTESY CHRISTIE ANDERSON 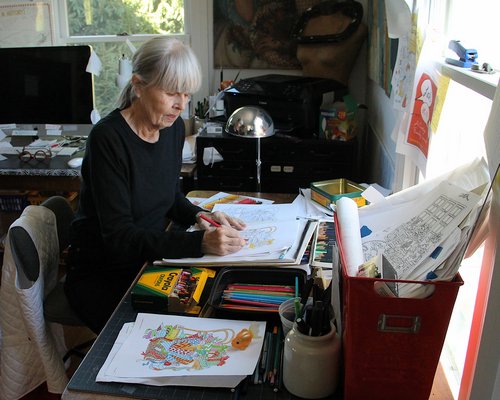 Eric Kunz, owner of Seemore Gardens, stands in front of his greenhouse inside the Hitherbrook Nursery in St. James. KYLE CAMPBELL 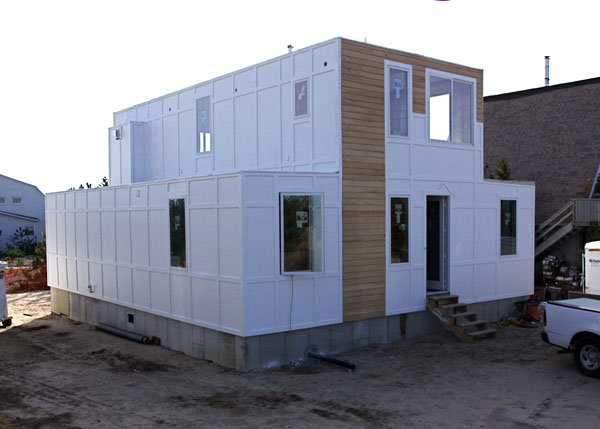 Eventually, much of the corrugated steel is covered, with the exception of the upstairs ceiling and a section of wall downstairs. COURTESY CHRISTIE ANDERSON 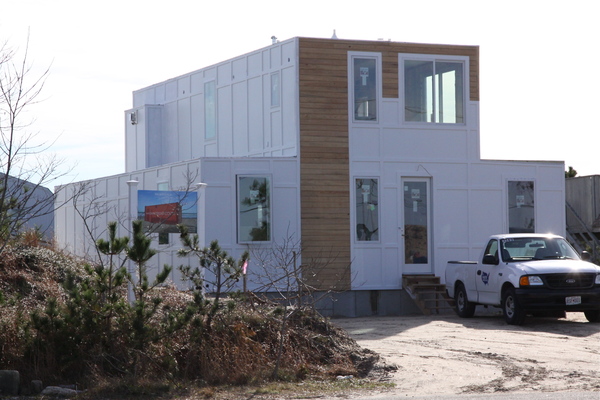 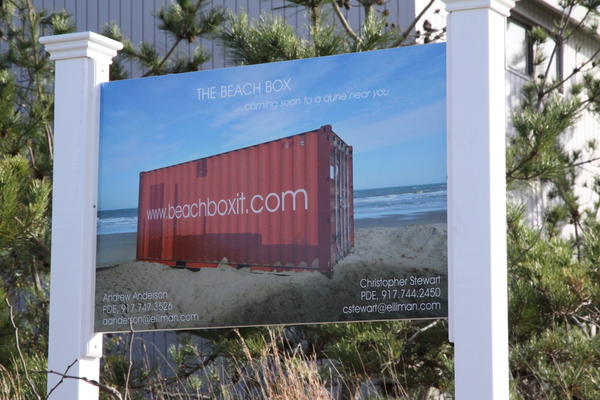 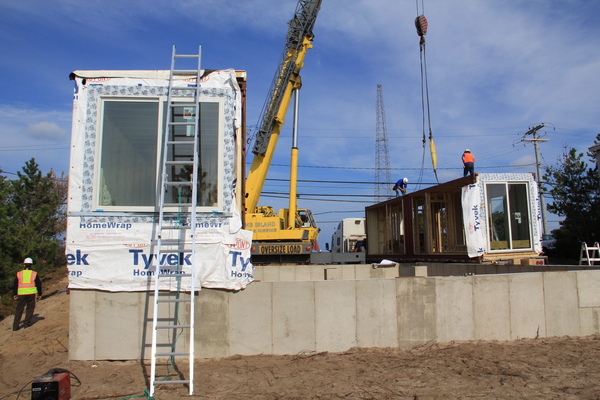 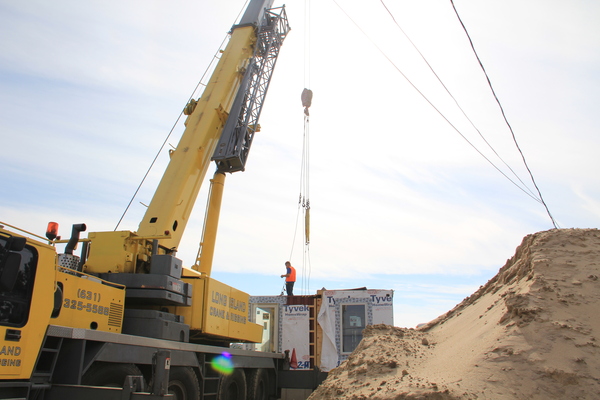 A view of the corrugated steel ceiling. KYRIL BROMLEY 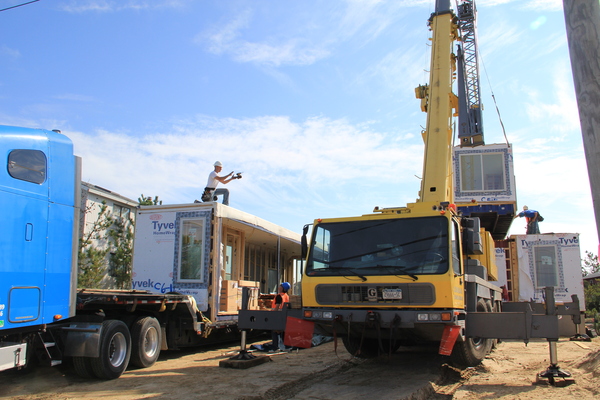 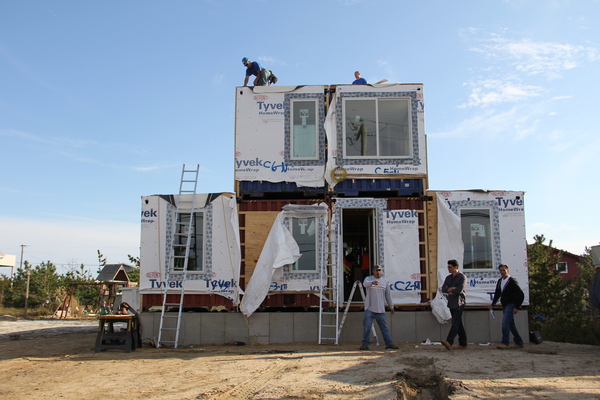 The house on Napeague is coming together, with a soft gray exterior and mature landscaping yet to come. KYRIL BROMLEY

Fledging developer Andrew Anderson is challenging the idea of what a typical Hamptons beach house is, and the result is already turning a few heads.

“It was like Legos for adults,” Christopher Stewart, a real estate broker, said of seeing six steel cargo containers pieced together into a beach house in Amagansett one day in October. “It was an incredible process to watch.”

“It’s really cool,” said Mr. Anderson, who’s developing his first Beach Box, or Hamptons container house, between an A-frame and a high-ranch on a small lot on the Napeague stretch. “They come to the site and have this huge 75-ton crane lift the containers up and drop them into place.”

Late last week Mr. Anderson was visiting the beach house to see how finish work was getting on. He said he hopes the house will be a prototype for many to come, adding that this first one will hit the market in spring with a price tag somewhere “south” of $1.5 million, and with Mr. Stewart as the broker.

“Essentially a container has a 15- to 20-year life span, at which point they retire them,” Mr. Anderson said.

According to Mr. Anderson, after approximately 20 years, the containers are usually piled up at ports to be melted down. But a friend of his has founded a New York-based company called Safe Green Building Blocks that has been converting them, in-

stead, for an array of uses such as hurricane- and earthquake-resistant barracks, relief housing, hotels and—now, for what Mr. Anderson said he thinks is a first on the East Coast—luxury habitats.

“This gives you an opportunity to give these containers a second life,” he said of “upcycling” them into beach retreats. “You can build them to look like anything; I happen to be doing a very modern beach house,” he said.

“You’re only going to know the container where we want you to,” such as where the corrugated steel ceiling is intentionally left exposed throughout the second floor, Mr. Anderson said. A subtle bit of corrugated steel on a first-floor wall prepares those who enter for the ceiling expanse upstairs.

At about 2,000 square feet, the Beach Box house consists of four blocks on the bottom and two on top in an upside-down layout to take advantage of views of ocean, dunes and bay. There is lots of glass, including large sliding doors; and lots of decks, including one that wraps around three walls of the second floor.

The house boasts four bedrooms—all on the first floor, one with a walk-in closet—two and a half baths, a mud room, a fireplace, an outdoor shower and a saltwater pool. The exterior is clad in cypress and panel siding to be painted gray.

Reusing shipping containers to build the house is just one way its carbon footprint has been reduced. Wood elements are certified by the Forest Stewardship Council, which promotes responsible forest management, and kitchen countertops are made of an eco-friendly, re-purposed paper composite the developer described as “incredibly durable.” Energy consumption will be almost halved, Mr. Anderson said, thanks to spray-foam insulation, a “tier-16” climate control system, LED illumination, a tankless hot water heater and a heat-reflecting roof membrane.

“This is the first of hopefully many to come,” he said of the house he said he hopes will be the first of six to go up in the next two years in the Hamptons. “They have a fairly limitless array of applications.”

A real estate broker in Manhattan who is starting a development career, Mr. Anderson has been negotiating to buy three lots—in neighborhoods from Amagansett to Montauk—for three more container houses. He said he plans to make them similar in style to the one on Napeague, which happens to be his personal preference.

But, he added, “You can make these look like anything,” he said; even incorporating the usual Hamptons cedar shingles and gambrel roofs.

“You’ll see me do a nice traditional house in East Hampton Village shortly,” he said of a future container house project. “Just to show everyone that we can do that style.”

Container houses not only are “three times stronger than anything,” he said, thus a pleasure for home insurers, but they are less wasteful and quicker to build than “a traditional stick building,” according to Mr. Anderson.

A would-be homeowner could go “from a handshake to a house in probably three to four months instead of six to twelve,” he said. “You essentially get a turnkey product.”

And the unusual building process is not only grabbing some attention, it’s also quite streamlined, according to Mr. Anderson.

“Everybody was stopping by the day we did it,” he said. “They came at 9 in the morning and started loading the first modular onto the foundation, and by 1 o’clock I was standing on the second floor of the house.”