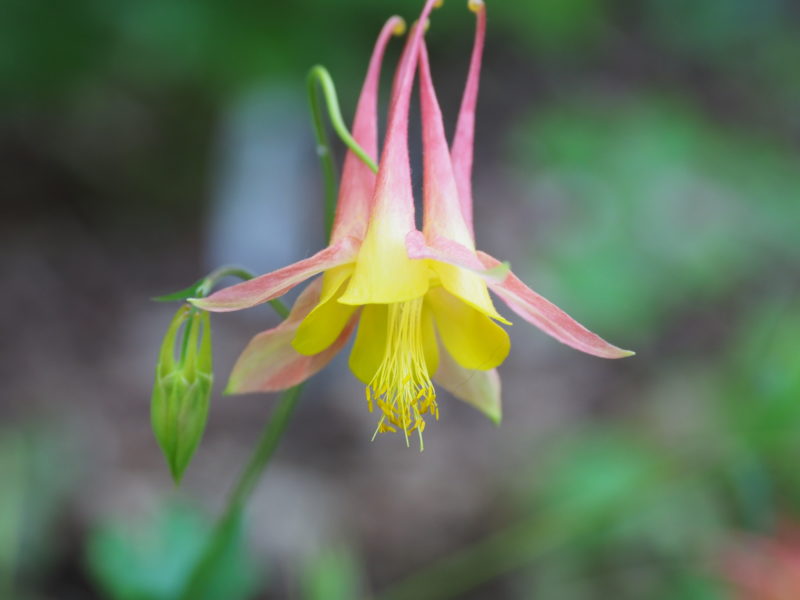 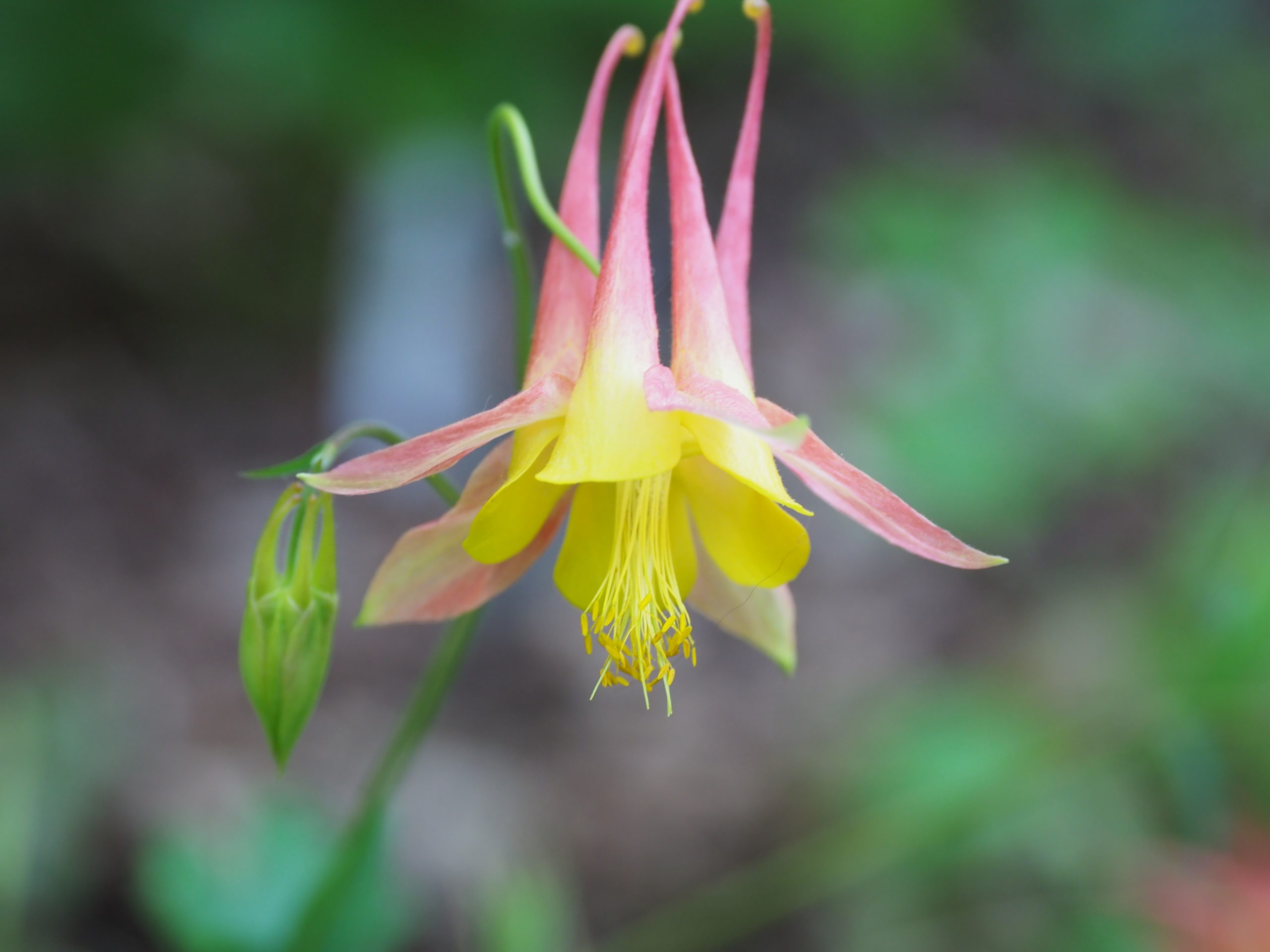 Aquilegia canadensis is a native columbine that usually has medium-sized columbine flowers with medium to long spurs and is about 2 feet tall. They are early favorites of hummingbirds, and this particular plant had extremely large flowers for the species and was nearly 4 feet tall. The seed will be collected, and next year we’ll find out if the flower size holds for the next generation. ANDREW MESSINGER 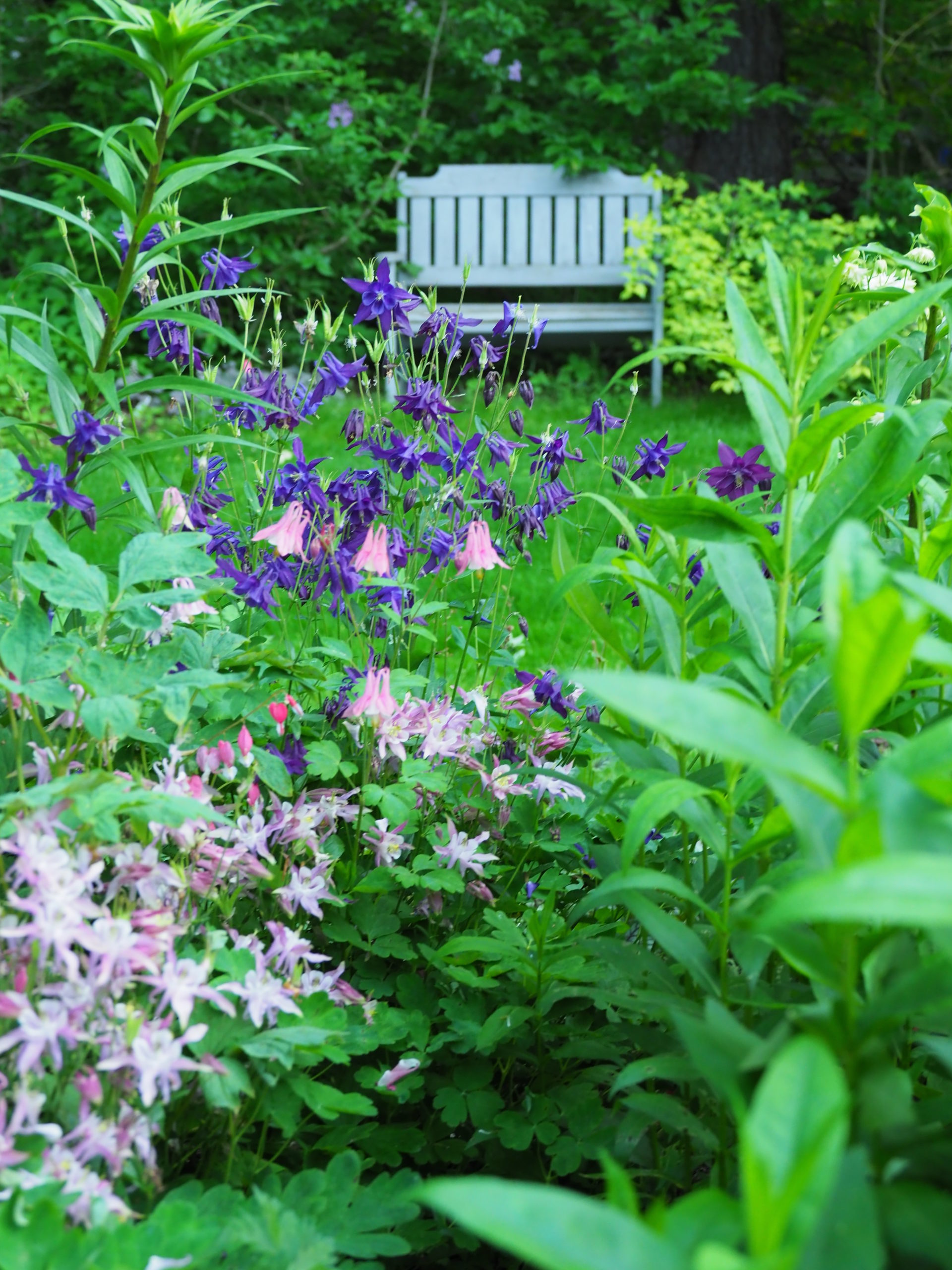 When columbines are allowed to cross pollinate in the garden this can result in an interesting show of Aquilegia colors, styles and heights if seeds are allowed to resow naturally or after being collected. ANDREW MESSINGER 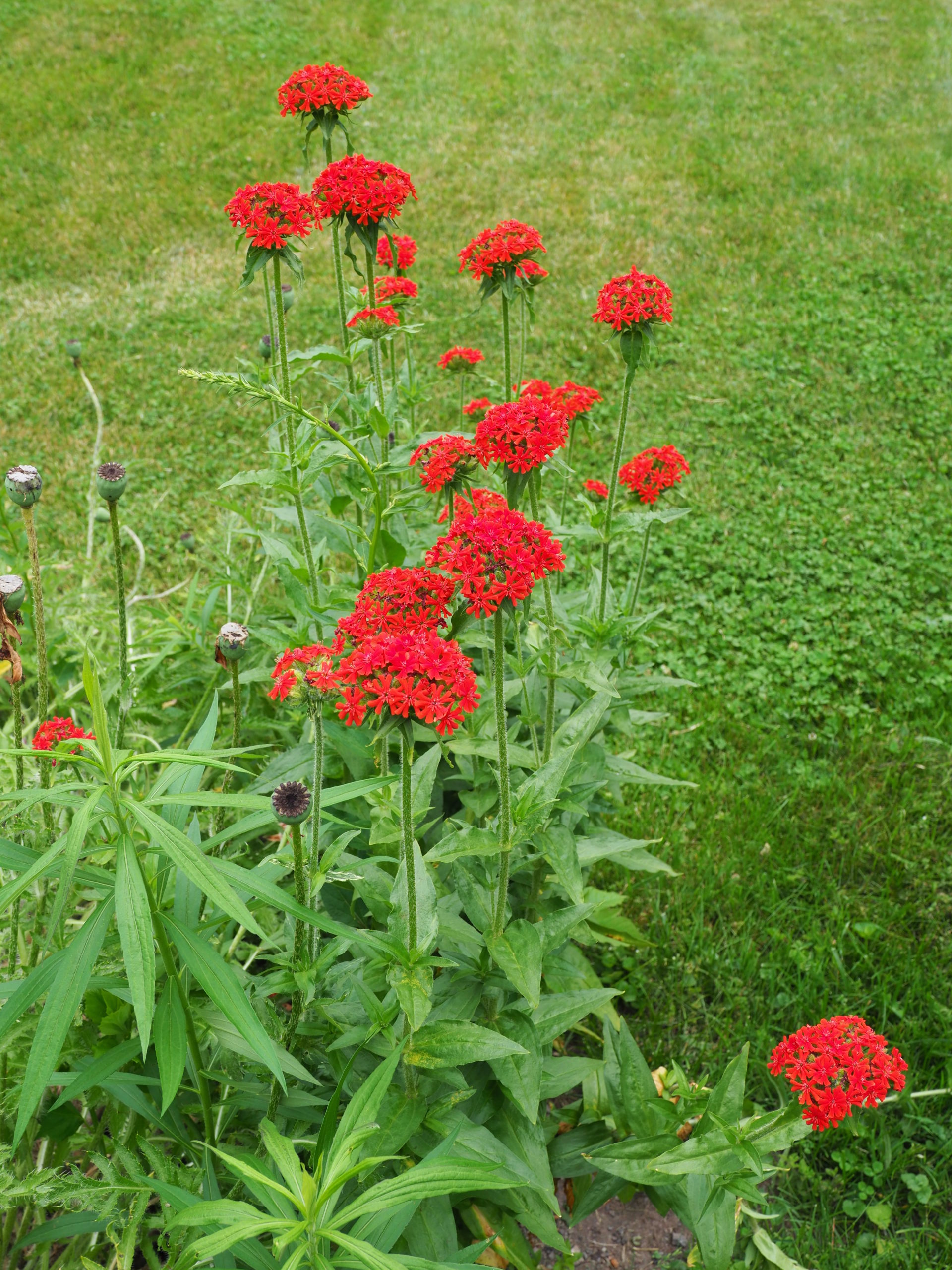 The poppies having faded and left their seed heads atop the flower stems the Lychnis chalcedonica (Maltese cross) begins to fill in and continue the brilliant color display. ANDREW MESSINGER 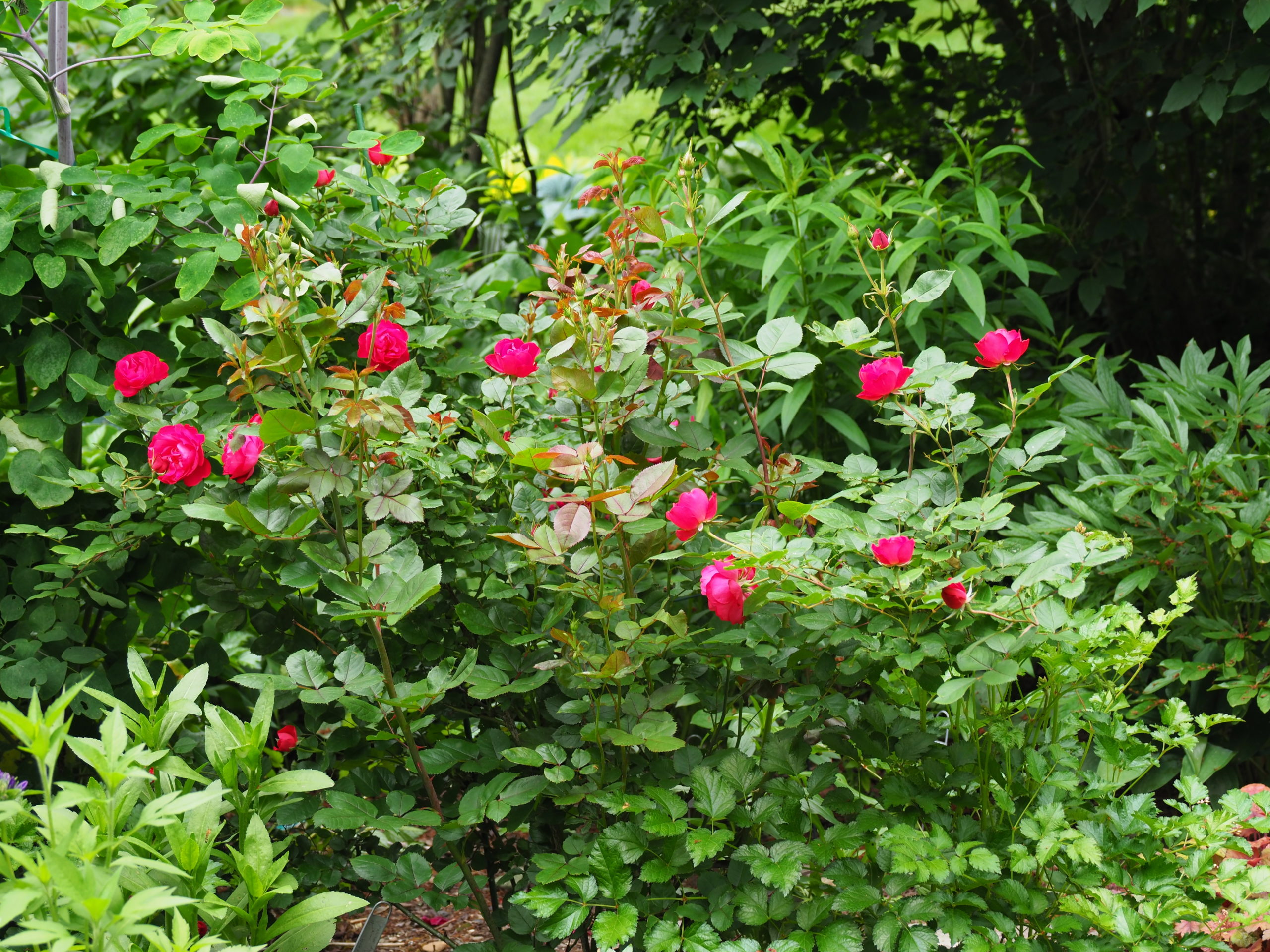 Rose “Oso Easy Double Red” has been a great performer blooming all summer long on a plant that needs little care other than spring pruning and feeding. The flowers glow late in the day. ANDREW MESSINGER 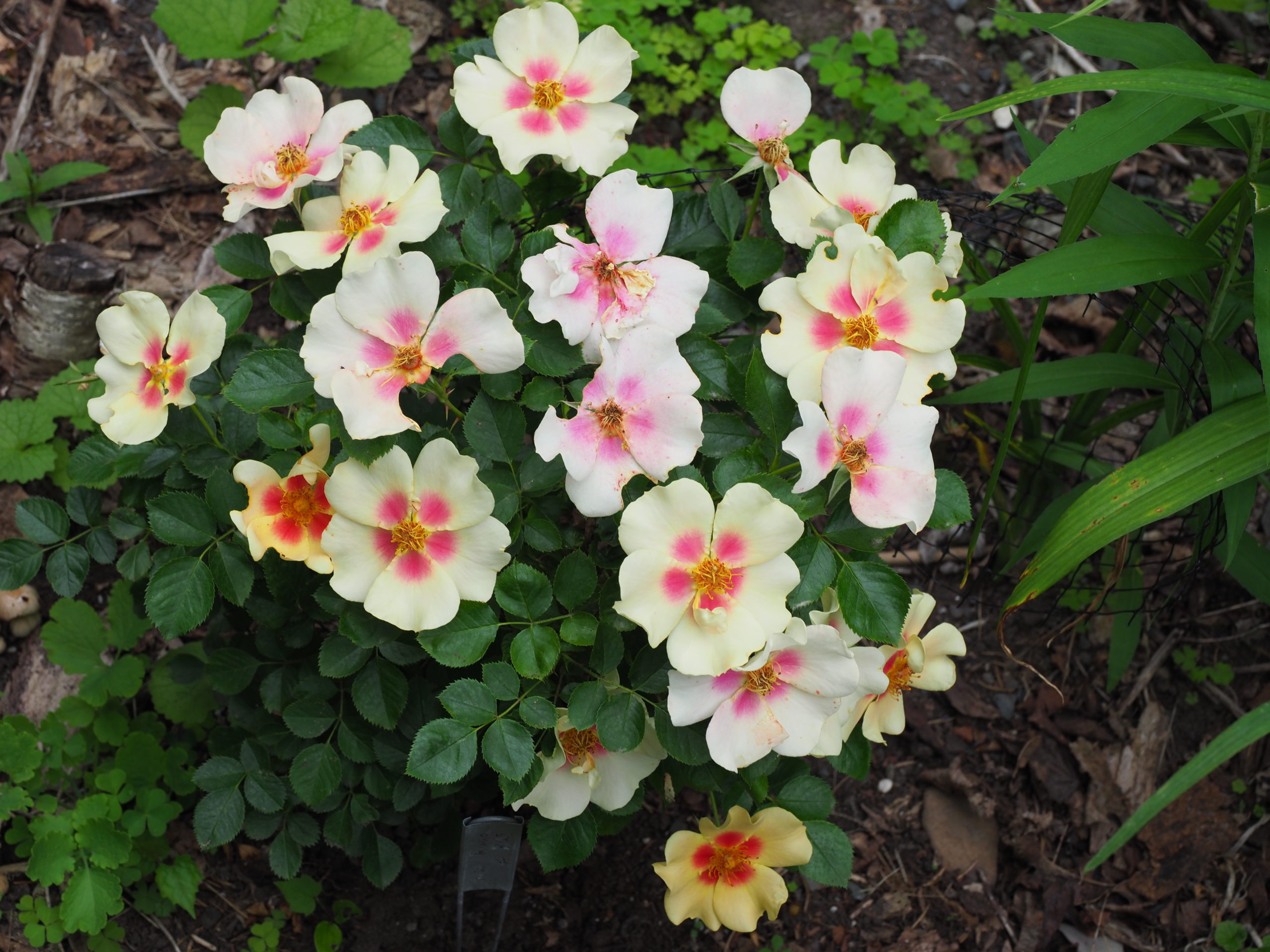 Rose “Ringo” is a new introduction with single flowers that open with yellow petals and reddish pink centers. As the flowers age their hue changes, but the plant continues to be covered with new flowers and buds. This plant is in year two of a trial, so stay tuned. ANDREW MESSINGER 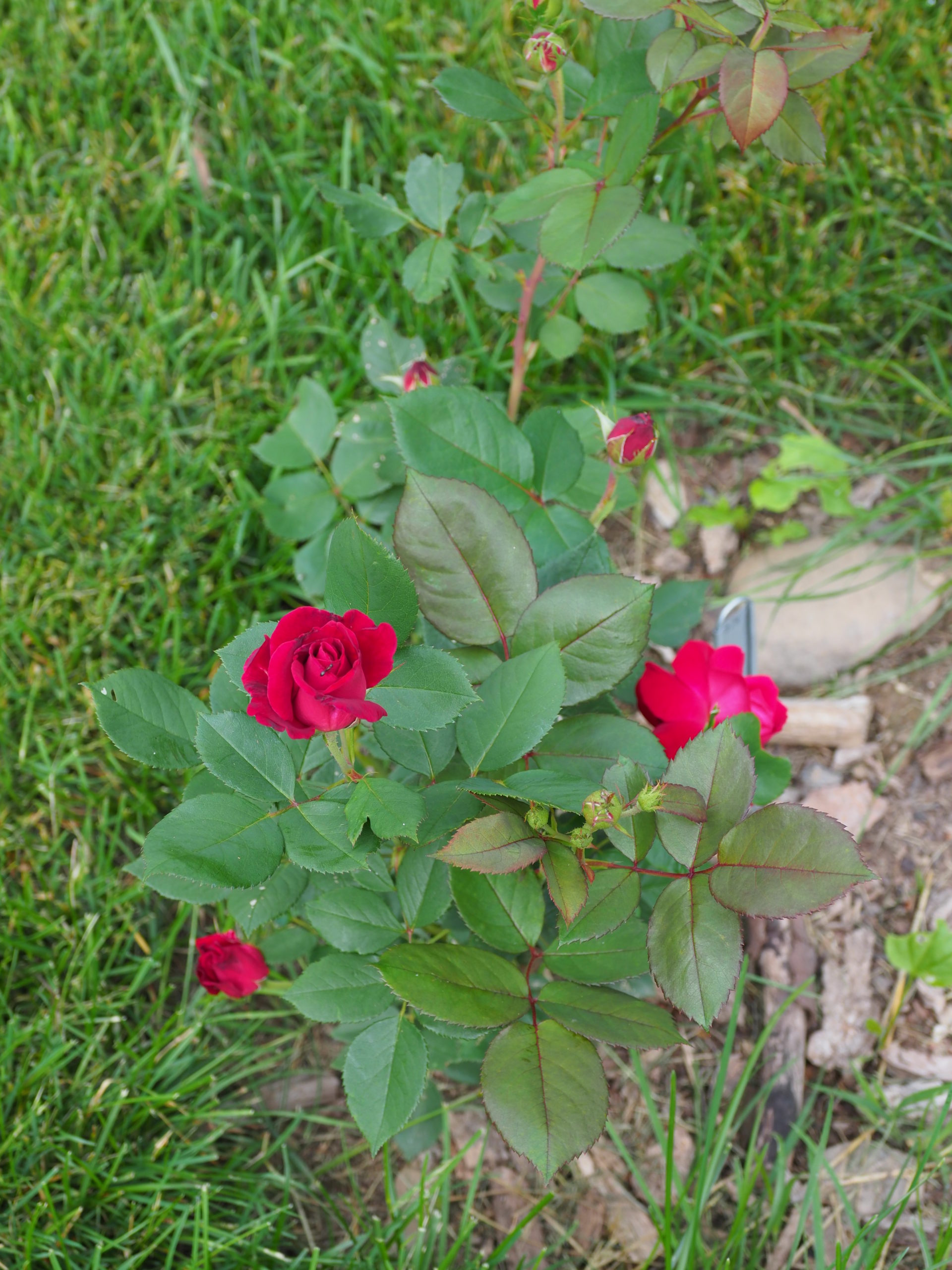 Rose “Sweet Spirit” is a grandiflora-type rose with a more typical rose scent. This rose has become very popular since its introduction only a few years ago and has won several awards in trials. This plant is now blooming after only being planted six weeks ago as a bare-root plant. ANDREW MESSINGER

This is one of those times when I wish I could just give you all a link and take you on a virtual tour of my garden. There is just so much happening, and since I’m only working in my own garden these days, I’m constantly seeing new things and understanding so much more. So this week, a bit of a written tour with comments as well as a few rants.

I swore off growing roses when I abandoned my gardens at Southampton College nearly 35 years ago. Too many bugs, too many diseases and the deer seemed to get the rose buds even before they showed any color. It also seemed from what I was gleaning from conferences and plant pathologists that the rose industry was selling us plants that they knew were being shipped out with diseases that perpetuated the use of chemical pesticides and/or the failure of the plant. I think that eventually doomed what was a large and thriving business.

I’d been sent some roses to trial, but none performed to the point where I would recommend them. In 2017, however, I was sent a sample of rose “Oso Easy Double Red.” It’s been in the garden now for nearly five years, and I can’t tell you how happy I am with this one. It arrived in a small pot, has been moved twice and now this top performer is a plant 4 feet wide and 4 feet tall that’s just covered with incredible red flowers that absolutely glow in the late afternoon through dusk. It probably flowers for six months, has only had one slight disease issue that has cleared up on its own, is remarkably hardy and seems not to be overly attractive to Japanese beetles.

It’s called a “shrub” rose by Proven Winners, and while you won’t get long stems that would make it great as a cut flower, I simply put the stems in a short vase where it’s perfectly happy, wafts a mildly but clear rose scent and the flowers last for days.

Two years into a trial is another rose, Ringo, which is also from Proven Winners. It began flowering several weeks ago. Although the plant is still small, it’s just covered with these single yellow flowers having 1-inch pinwheel red centers. The flowers are always changing hues so it really has a kaleidoscope effect. Too soon to report disease and insect resistance, but early reports are hopeful. When mature, the plant should be 4 feet tall and 4 feet wide.

Last winter I was reading about a rose named Sweet Spirit. This rose has gotten numerous rewards and is rated very highly by the American Garden Rose Selection trials. I wanted to try one. I waited too long, and the only place I could find one was through the White Flower Farm. It arrived as a bare-root plant, and I had limited expectations. But after a struggle of a few weeks, the plant has taken off and will bloom momentarily.

Unlike the two roses mentioned earlier, this one, introduced in 2019, has a much more fragrant, cherry red flower on stems long enough to make it a nice cut flower. This is a grandiflora-type rose, and I’m waiting to see how it does when it comes to disease resistance. Stay tuned on this one, but it is getting great reviews from other growers.

In May I received two urgent messages that temperature and humidity conditions were perfect on several days for the spread and transmission of the boxwood blight. The messages were meant for commercial nurseries advising them to apply the appropriate chemical sprays on their boxwood stock to protect them. And when these plants get sold to garden centers and then us, what are we to do? There is no cure for the blight, and the spraying only hides the symptoms.

Garden centers and nurseries continue to sell these plants, they continue to die in our landscapes and still no one has the will to say “stop!” We’re being sold plants that are nearly doomed to failure. Seems it’s more important to sell these plants than be honest about what might happen when they get to your home. Shame on the industry for continuing to shoot themselves in the foot and offering us known diseased plants. Some garden centers sell them and say the ones they have are blight resistant. Ask them for proof. Any proof.

And if that is enough bad news for boxwood lovers, we also found out that some shipments of boxwoods from Canada that came into the United States this spring were contaminated with the box tree moth, whose caterpillar can destroy the shrubs. The infected boxwoods were shipped into New York and five other states. The USDA has sent out a warning and has banned the importation of boxwoods, Euonymus and Ilex (holly) species from Canada.

I have a small circular garden that’s about 6 feet in diameter. In the spring the bed is covered with the glowing flowers of Papaver (poppy) “Brilliant.” As the poppies fade Lychnis chalcedonica (the Maltese cross) begins to flower and the color riot continues. As the Lychnis fades later in the summer the shoots of a brilliant red perennial hibiscus come into flower. So this little round garden has stunning, tall flowers from May through September that require little to no maintenance other than some staking.

I’m not a designer and not a great color coordinator, but this combination certainly is a traffic stopper as people drive by. If you want to grow the Lychnis, it’s easily grown from seed if you can’t find the plants at garden centers. Make sure the Lychnis and hibiscus are in the center of the circle, though, or you’ll have great color in a lopsided circle.

I enjoy growing many of my plants from seed, and seed collecting season is already upon us. Seed from Primula plants is maturing now as are most of the columbines. My columbines went crazy last year and had rampant sex with each other. As a result, I’ve got a riot of columbine colors and styles so the seed collected this year should result in some wild displays next year.

When collecting the seeds of either of these plants, allow them to dry for a couple of days indoors where it’s warm but not hot. The seed can then be sown directly outdoors where you want the plants to establish. Rake a smooth planting bed then simply drop the seed onto the bed. Use a piece of wood as a tamper to ensure the seed is in good contact with the soil. Don’t cover the seed. They will germinate in 2-3 weeks and can be thinned three weeks later.

Primula seed can be as fine as dust and you may need some practice. Columbine seed is about the size of a grain of salt, but black. You can also sow the seeds into seed flats but when sown directly into the garden there’s no need to transplant, just thin.

In just a few days the Japanese beetles will start to emerge. This is frequently a problem for those growing roses, perennial hibiscus, shrub hibiscus and on some vegetables. These plants can be sprayed with Neem oil and the oil may have a repellent effect on the beetles. The oil (which is organic) can also stop a number of foliar disease issues (on roses and garden Phlox and other labeled plants) including mildew. A week before I expect the beetles to show up, I’ll begin spraying the neem oil twice a week either early in the morning or in the evening. Never apply it in hot weather, direct sun or when temperatures above 85 degrees are expected.

I know you’ve just gotten your gardens set and going, but it’s time to think about your fall gardens, both ornamental and vegetable. Keep planting in the vegetable garden as spaces become available. I’m about to plant pots of basil where the German garlic was just harvested.

The Time To Side Dress Plants With Organic Fertilizer Is Now

We’re now well into the prime growing season for both vegetables and ornamentals. Mother Nature ... 5 Jul 2021 by Andrew Messinger

Vines And Climbers Can Serve Many Purposes

Just about every property, from an apartment with a balcony to a sprawling estate, has ... 27 Jun 2021 by Andrew Messinger