The Poinsetta, That Ubiquitous Christmas Plant 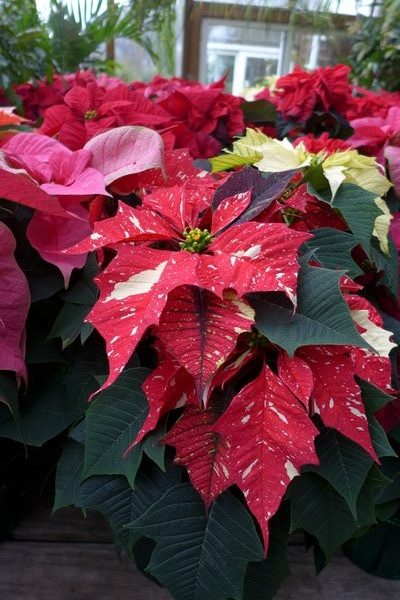 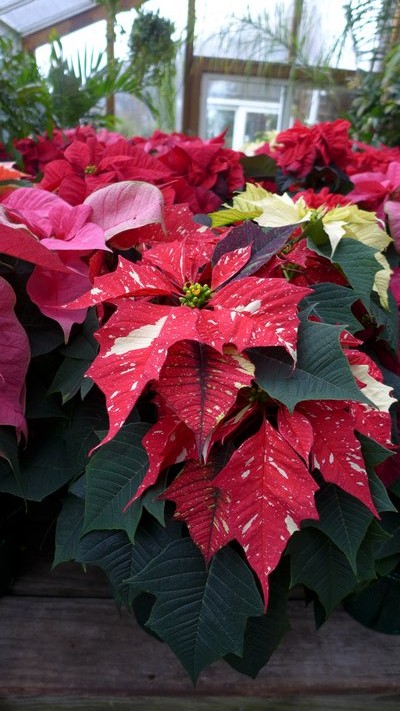 Long gone are the days of just plain red poinsettias. Breeding programs now give us a range of colors as well as patterns in this traditional holiday plant. ANDREW MESSINGER 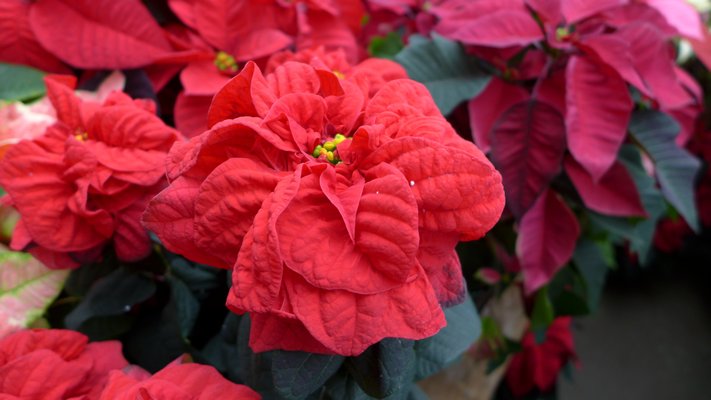 New to the poinsettia repertoire is this slightly ruffled bract that adds a new texture to a traditional color. The tiny green spot in the center of the bract cluster is the true flower buds. ANDREW MESSINGER 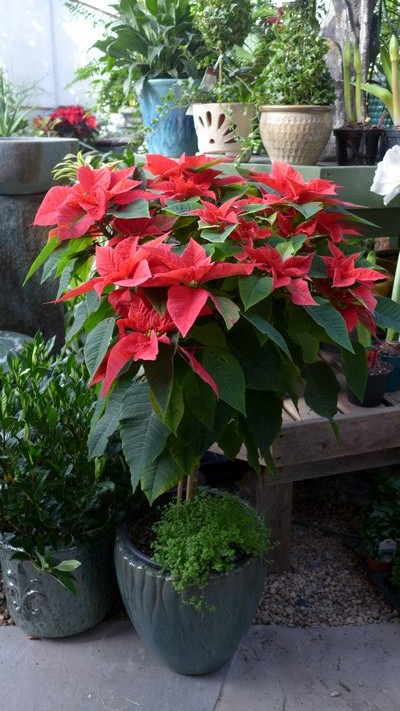 This poinsettia is referred to as a "standard" because it’s growing on a 3-foot-tall stem. Points like this are much more expensive because they take longer to grow but they’re also more dramatic and allow for a very different type of display. ANDREW MESSINGER 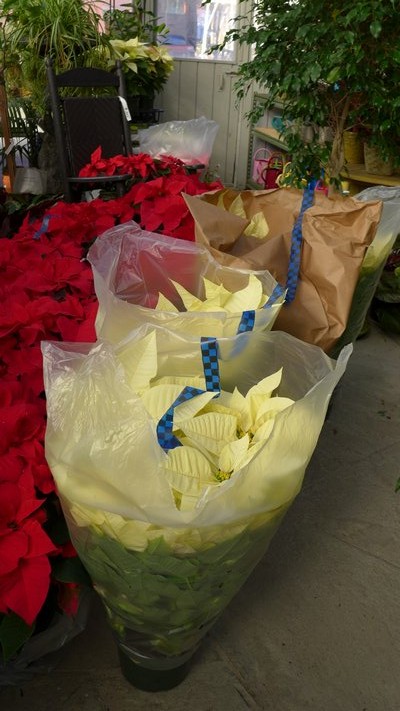 Be wary of poinsettias sold in sleeves. They may appear to be protected but if left in these sleeves for too long the foliage and bracts can be affected. Sleeves are great for moving the plants, but not for storage. ANDREW MESSINGER 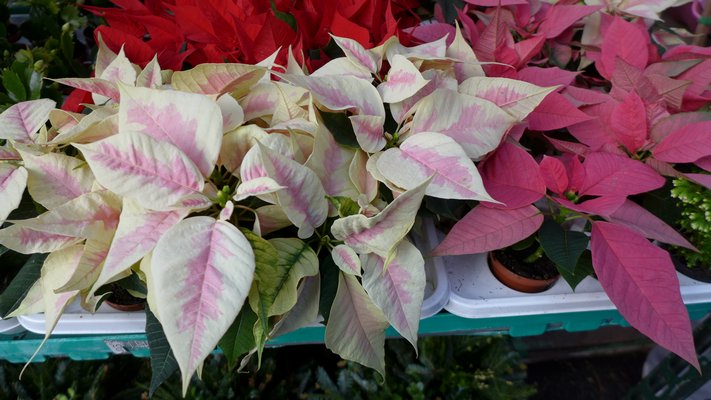 These poinsettias are in small, 2-inch pots. This size is somewhat new to the market and the smaller plants make nice fillers and desktop and centerpiece plants. ANDREW MESSINGER

To be honest with you, I’m not sure I’ve ever owned a poinsettia, though I’ve grown thousands. They are one of the symbols of the commercialization of the holiday season that I choose to avoid and yet hundreds of millions of them will be sold in the next few weeks. And to be honest, these plants offer a splash of color at a time of the year when the days are short, dark, and things can be otherwise gloomy.Choices range from tiny rooted stems in flats and small plants in 2-inch pots to the single-stemmed, mass-produced $1.99 type in 4-inch pots. From multi-stemmed $4.99 plants from Canada that you can find at the Orange Box, Target and supermarkets to a single-trunk standard that has been worked on in a greenhouse for as long as a year and may run more than $200. Some pendulous varieties are also sold now in large hanging baskets, and they look pretty cool.

The poinsettia has certainly come a long way from the spindly weed that Joel Roberts Poinsett brought up from Mexico in 1825. It’s native to parts of Central America and its association with Christmas may actually go back to 16th-century Mexico when locals gathered it along with other weeds to place in front of the church altar. In the 17th century, though, Franciscan friars began to use the plant in their Christmas celebrations, as in its natural habitat it begins to turn red right around the Christmas holiday season.

In this country the poinsettia was popularized by Albert Ecke, a German émigré living in Los Angeles who began selling them at street stands. His son, Paul, developed a technique for grafting the plants and the third generation, Paul Ecke Jr., is said to have made the commercial association between the plants and the Christmas season. Ecke Poinsettias then became the world’s largest producer of poinsettia cuttings, which were shipped all over the country and then the world. It’s these famous cuttings that are “grown on” at precise schedules in production greenhouses from coast to coast to produce the enormous numbers of plants that are sold each year.

Hybridizers, grafters and breeders such as Ecke sell these cuttings along with precise charting and directions so a grower knows nearly and to the day how long it will take to produce a plant in color (they are not in flower; the colors come from the bracts based on natural light, added artificial light, hours of darkness and feeding schedules. It’s quite a remarkable feat, but it’s certainly been developed into a science of its own. To be sure, there is a poinsettia for every taste and budget, and they’re not just red anymore either. There are shades of red as well as pinks, yellows, whites and near doubles, and it doesn’t stop there. Now you can find bi-colors and tri-colors as well as splotched and speckled foliage. We also know now that these plants are non-poisonous and the most they will do to a child (if a substantial part of the plant is ingested) is to cause an upset stomach. We’ve also learned that they’re not toxic to pets, either. The lingering urban legend of the toxicity of this plant seems to go back to 1919, when there was an erroneous report of a 2-year-old child who consumed a poinsettia leaf and died.

The fact of the matter is that scientific studies have showed that a 50-pound child would need to eat more than 500 bracts to get anywhere near a toxic reaction. But another study showed that there was no reaction even at these high levels. At most, the sap can cause a mild irritation to the mouths of dogs or cats, but they are certainly not fatal as was once the gospel.

The poinsettia industry—and it is an industry with millions and millions of plants produced annually—has done an admirable job of making this colorful and joyous holiday plant a welcome guest in our homes. Gone are the days when growers had to spray chemicals and gas greenhouses day after day to control whiteflies, because they’ve learned that a small wasp (Encarcia formosa) and careful work by growers can eliminate the whitefly problem by almost 99 percent. Gone are the days when the plants lived for only a few weeks after they got home, because breeding programs have produced new poinsettias that will live for months, if not years, when properly cared for.

Another thing that has changed is where these plants are grown. Twenty years ago huge numbers were grown on Long Island and in New Jersey and shipped all over the East Coast. These days most seem to be grown in North Carolina and trucked north or grown in Canada and trucked south.

This all said and done, and with all of the work accomplished by plant breeders, entomologists and pathologists, there is only one thing missing. YOU! With so many changes in such a short time there have been dramatic changes in the way that these plants are grown and produced. You need to shop for them carefully and if you get one as a gift you need to understand their simple needs so that they can be enjoyed long beyond the brief holiday period.

When shopping for poinsettias, avoid plants tinged with too much green around the bract edges. Unlike the rosebud that will continue to mature in your home, an underdeveloped poinsettia taken into the home or office too soon may never develop its full color potential. Make sure that the secondary, smaller bracts that surround the cyathia (small yellow berries) are fully colored. If the secondary bracts are not fully colored, the plants will quickly fade and lose color once home.

An abundance of dark, rich green foliage is not only attractive, but is a vital sign of good plant health. Look for plants with lush green foliage that is undamaged and free of discoloration. The foliage should appear dense and plentiful all the way down to the soil line. This is a good indication that the plants have an active, healthy root system.

Look for plants that are balanced, full and attractive from all angles. A proper proportion of plant height and shape to the pot size is the key to an aesthetically pleasing poinsettia. A generally accepted standard for a top-quality (not from the roadside or discount drugstore) plant is that it should be about two and a half times bigger than the pot size. A plant in a 4-inch pot and 18 inches tall will appear too tall and leggy, but in a 6-inch pot, the 18-inch-tall plant will look proportionate. In general, the best height range for a good-quality, 6-inch, branched plant will be 15 to 18 inches. This is measured from the base of the pot to the top of the plant.

Look for durable plants, ones that are most likely to give you or the person you’re buying for the longest period of enjoyment. The signs of a durable plant are strong, stiff stems, good leaf and bract retention and no signs of wilting, breaking or drooping. Plants for sale on a sidewalk or outdoors in front of a shop when it’s 30 degrees out should always be avoided.

Be very wary of poinsettias displayed in paper, plastic or mesh sleeves. These sleeves are meant to be used for shipping purposes only, and while they offer convenience to the retailer and grower, the quality of the plants deteriorates the longer that they remain in their sleeves, and growth can be retarded and shape distorted. Avoid any plant that is waterlogged, especially if the plant looks wilted, as this is usually a sign of an irreversible root rot.

If you are buying the plants for your business or giving them as gifts without actually doing the shopping, all you need to do is call your favorite flower shop and tell them what you want. They will know almost immediately what’s available from local greenhouses and what the prices will be like. By the same token, if you live in Amagansett and want to give one to a friend or client in Seattle, just call one of the flower-by-wire services and they’ll take care of you. Better yet, get the Seattle yellow pages (through your internet provider) and locate a store in Seattle … the service will probably be much more reliable in terms of quality and cost. Keep growing.