The Sculpture ‘Synopsis’ Rises At A Farm Stand In Hayground 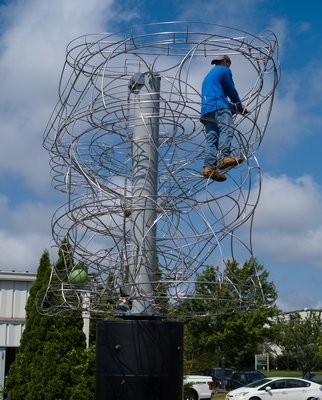 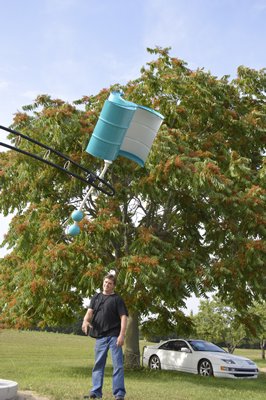 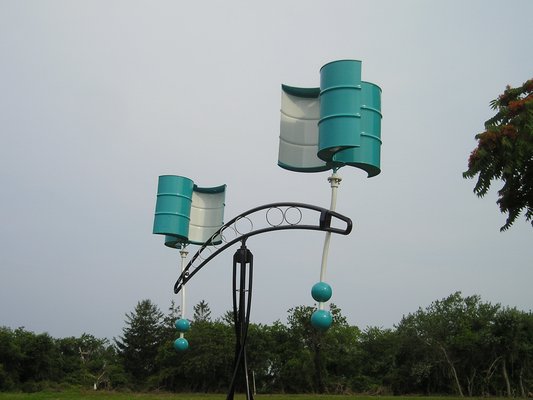 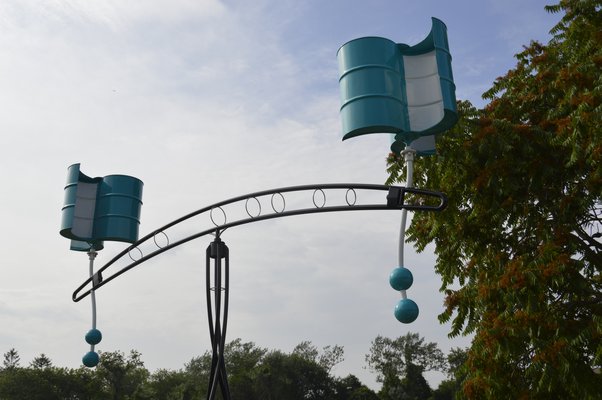 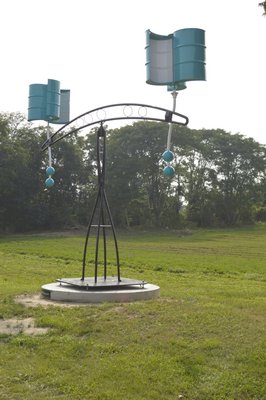 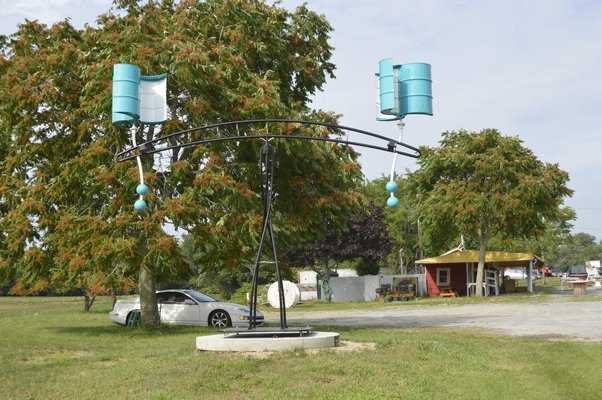 Sculptures are rising on farm fields like stalks of corn—whether it’s a Roy Lichtenstein outside the Parrish, or a Robert Mojeski beside the Green Thumb Market at Hayground.

Mr. Mojeski’s “Synopsis” was planted by crane in a field next to the farm stand, which is on the north side of Montauk Highway, on the Friday of the Fourth of July holiday weekend. It’s about 1,700 pounds and consists, in part, of two 55-gallon oil drums, split open and painted aqua and white, that dip and rise, pivot and revolve in the wind.

“You’ll see it dance like this on a windy day,” Mr. Mojeski said on Thursday, July 9, as he nudged a lead-filled aqua ball to set the kinetic sculpture in motion. “You never know where it’s going and which way.”

The repurposed drums sit above a cross bow that also moves in the breeze, and which in turn sits above a stand that looks like a ballet dancer’s legs, entwined and delicate.

“I don’t like interfering with the background—you should be able to see through so it’s not interrupting what you’re looking at,” said the sculptor, who calls himself Mojo. “There’s an elegance there. I take a lot of time on my lines.”

Mr. Mojeski’s “The Tipping Point XIX” cropped up on Ken Schwenk’s Sagaponack farm field, along Montauk Highway, last year, and the big yellow ball on its red, ladder-like stand is hard to miss. After working on his new sculpture over the winter and spring, the artist indirectly approached Ray Wallen, who manages the Green Thumb Hayground Market.

“Robert’s sister’s husband’s brother works for us on the farm, and he has for quite some time,” explained Mr. Wallen, whose family took over the Hayground market last year.

The employee, R.J. Nolan, relayed the request from Mr. Mojeski, who’s always on the lookout for large, open and prominent spaces for his sculptures, which are for sale, and which he also makes on commission. Mr. Wallen said yes, thinking “Synopsis” could provide “an extra touch to bring a little more creativity and individuality to this area” and also realizing that the family’s 4.5-acre field could provide the sculpture with “a fresh palette or clean slate.”

Just as Mr. Mojeski did with his sculpture in Sagaponack, “I like how he incorporated a modern spin on farming-esque equipment.” Mr. Wellen said. “Another cool thing about the one he put up here is the fact that it rotates like a windmill,” the farmer said, noting that there used to be a windmill either on the field or very close by.

Meanwhile, Mr. Mojeski, who grew up in Southampton and lives in Sag Harbor, spent 15 years fishing and on the water, experiencing what he called “just motion, motion, motion with the ocean.”

In fact, the drum-barrel blades, which look like pinwheels from below, seem to suggest both windmills and waves. “Not only are they giving you a representation of water, but action, and life is action—they show action,” Mr. Mojeski said.

Asked to explain the name of the sculpture, “Synopsis,” Mr. Mojeski said, “It’s answering a lot of questions from the atmosphere. In a heavy wind, she will lay over and not catch the wind as much,” he continued, adding that a waterfront setting would also be ideal.

“Nobody utilizes the wind very much to make sculpture,” said Mr. Mojeski. “It has to show more than, ‘Here I am, sitting still.’”

We’re all about telling the story: whether that’s through written word, an illustration, video or ... 29 Dec 2019 by Staff Writer