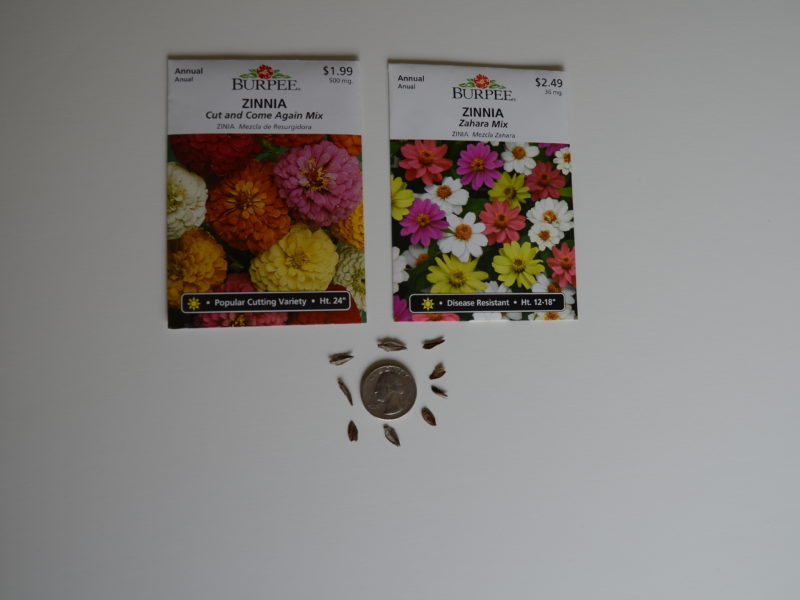 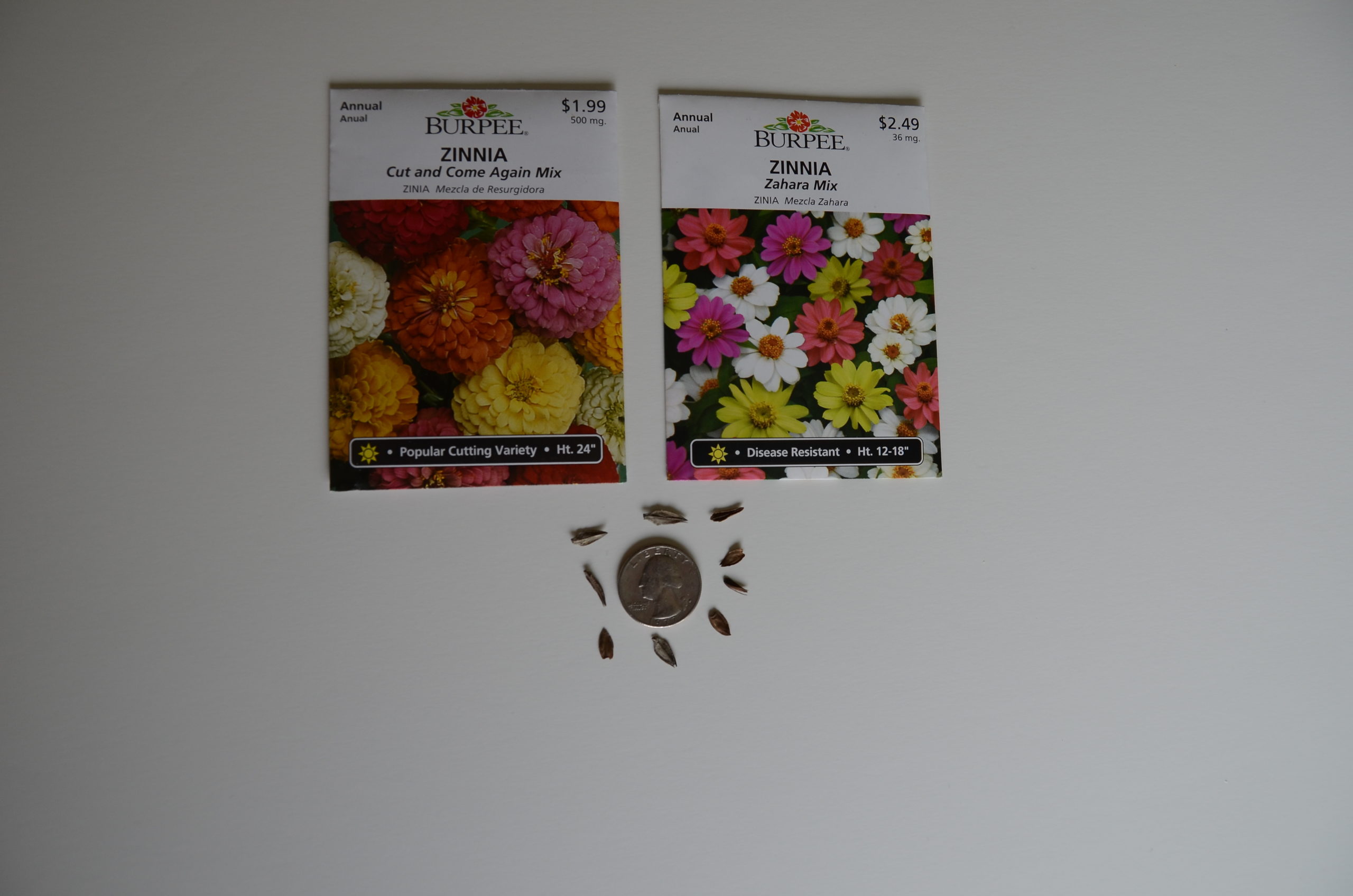 Zinnia seeds are large and easy to start, especially for kids, who can sow them right into the garden. You might find 10 to 15 varieties in cell packs at local garden centers, but online seed vendors often offer 50 varieties that you can grow from seed. 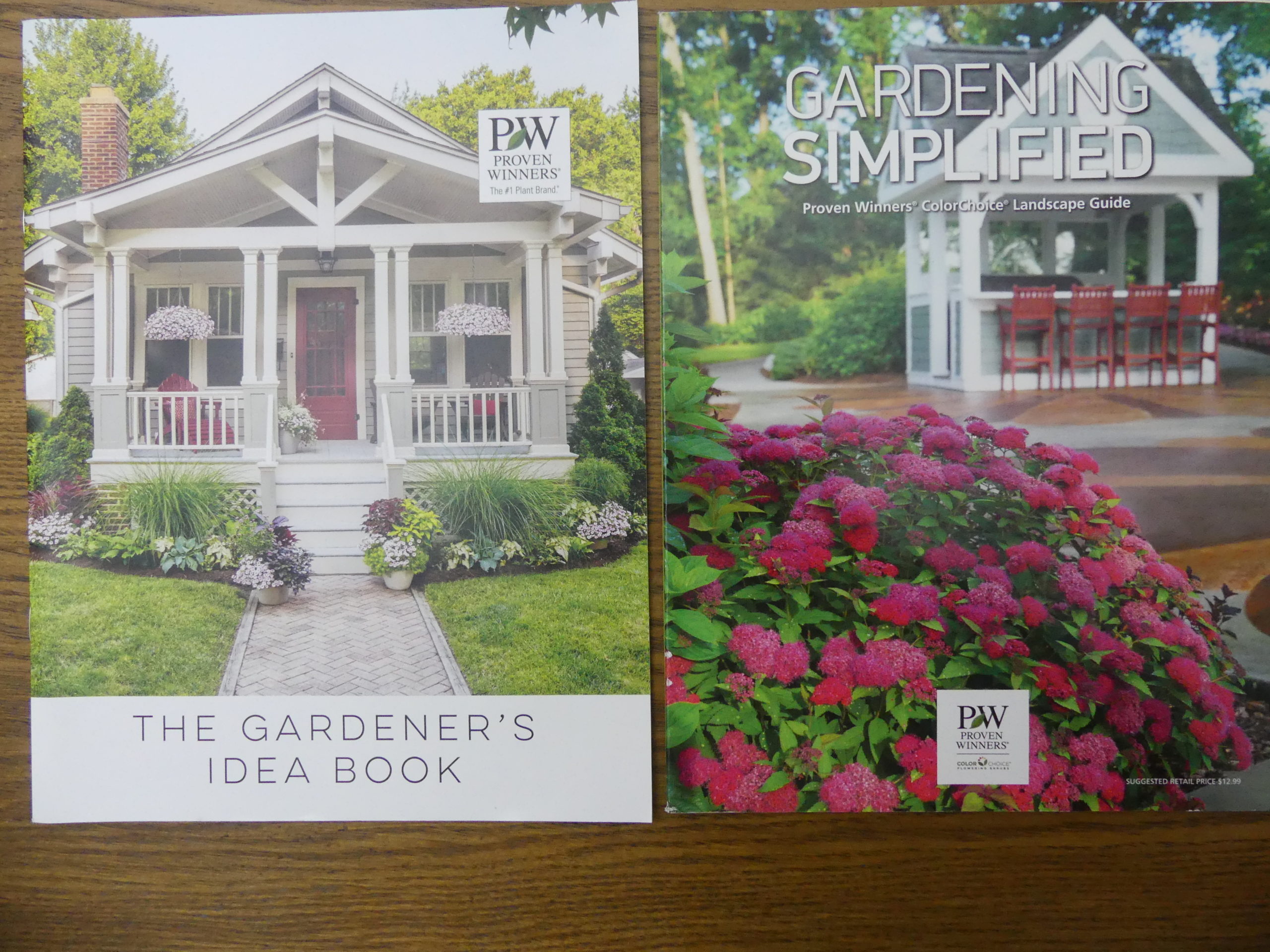 These two recent publications from Proven Winners, and several others, are available online if you don’t get them in the mail. 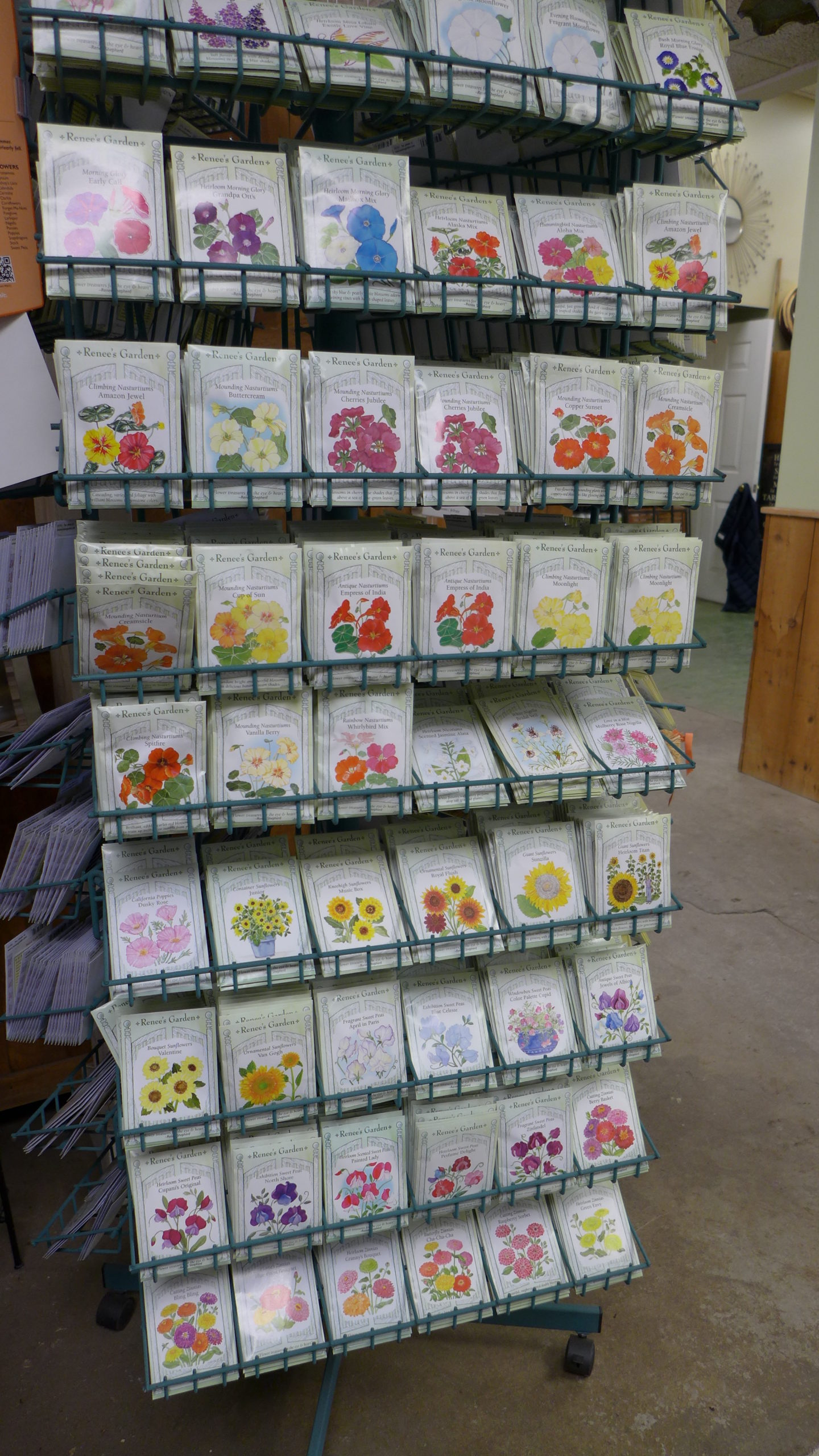 Seed racks at local garden centers are the first place to start when looking for annuals and vegetables that you can’t find as "starts" or cell packs. Variety is the spice of every garden, and gardener.

In the plant world, life usually begins with a seed. Simple, right? You plant the seed, the seed grows, you have your plant.

No, not that simple at all — and if you’re a non-vascular plant, like a fern, there isn’t a seed and life is a bit more complex. For now, though, let’s just stick to seeds.

Be it an ancient and stately giant sequoia or a simple petunia, life probably started from a seed if the plant didn’t originate in a lab. Even the tiniest of seeds is a miracle. That seed, often as small as a speck of dust or a grain of salt, has all the necessary ingredients inside of it for life to begin.

What it takes to get that seed to germinate — to begin the early stages of new life — is amazing. Some seeds germinate in just days while others can take years. Some seeds just need moisture to come to life while most need moisture and warmth. Some need fire while others need periods of heat and cold, often extreme heat and cold. Luckily, most of the seeds that an average gardener deals with are simple to start, but knowing what’s going on and how the process works is very important. Most important, though, is the fact that if you’re not growing plants from seed, you’re missing out on the joy of thousands of plants that could be in your garden that you simply won’t find in a plant catalog or garden center. Thousands and thousands.

So, if you want to grow your vegetables, annuals or perennials, maybe even a few trees from seed, how do you start? You’ll want to supply the three basic elements that a seed needs to begin growing: moisture, warmth (sometimes cold), and light — or, in some plants, the absence of light.

When you buy seeds — whether they are annuals, perennials, trees, et cetera — that seed has everything in it to begin growing. The seed is basically dormant and when the stimulus is present to break that dormancy, a root emerges, a shoot emerges and, for a short time, until the root and shoots can support the growing plant, all the energy or food that plant needs comes from within the seed embryo.

Now, you can’t really grow everything from seed. Plants that have been hybridized — when one plant’s pollen is given to another plant to produce a plant with different characteristics — you really can’t grow a new plant from the results of that hybrid cross. Some will be mules, unable to reproduce from seed, while others will probably show wildly different characteristics from the original two plants that were crossed. And, in some instances, that’s the whole purpose of the hybrid cross. So, that Golden Delicious apple won’t come “true” from seed — and neither will that incredible hybrid tea rose and magnificent new petunia.

All, or most, of these man-made crosses of plants are reproduced vegetatively either from cuttings, grafts, or cellular clones once the cross has been made. The only other way to come up with an exact duplicate is to use the same parent pollen and parent receiver plant all over again. And, yes, this is actually done commercially.

Well then, why grow anything from seed? Ah, so glad you asked. And the answer is one word: variety.

If you want to grow one of the new tomato varieties that have multiple disease resistances, as well as the other advertised characteristics, it must be grown from seed. It’s probably what we call a first filial, or F1, cross — which means the seeds that the tomato produces will either not germinate, or will not result in the same plant you expected.

Heirloom tomatoes, on the other hand, are usually hand pollinated, or the seed is taken from isolated tomato plants that can’t cross with others. So, that heirloom that our grandparents grew more than 50 years ago will be exactly like the one you can grow today — so long as the parent plant is not allowed to breed with a different variety of tomato.

But back to variety. Garden centers can only carry so many varieties of plants and they only want to carry those that they know sell well. What do you do, though, if you want varieties they don’t carry and are less common, but may be more promising? You grow them from seed.

The same holds true for annuals. Garden centers will only sell those annual varieties that are proven sellers, or varieties that growers are pushing as new, different, or improved. But what if you want to grow a tithonia, or an old-fashioned tall marigold like Crackerjack — which reaches up to 36 inches high — or a traditional hanging petunia with long stems that will drape perfectly from a basket, instead of forming a tight mound around it? Grow them from seed.

If a garden center is offering 15 varieties of peppers, 25 varieties of tomatoes and five varieties of cucumbers, consider that you can buy and start seeds for dozens and dozens of more varieties and have exactly what you want, not what they are offering. But they may have that seed you want. For some, it’s convenience that leads right to the cell packs on the benches. For others, those who seek variety and difference, it’s the seed rack and seed catalog where the shopping is done.

So, look through those online seed catalogs and the ones that arrive in the mail, find something different that spins your wheels or strikes your fancy, and order a packet of seeds. Garden centers are getting their seed racks out now, so take a look there and see what’s available, too. The largest selections of seeds are in catalogs, though, and that’s where you’ll find thousands — yes, thousands — of choices.

Next week, I’ll get into sowing the seed and getting things going indoors, so your assignment is to find something you can’t buy in cell packs. Find something that you’ve always been curious about. Let’s grow it from seed.

It doesn’t stop there, though. Many gardeners will sow seeds directly into their gardens. In terms of annuals, these seeds that are directly sown, or scattered, will germinate when the conditions are just right, or you can stall your seeding a bit. In most cases, the plants that result from these in situ seedings will flower later in the season than those planted from packs, flats, or pots. This extends the flowering (and vegetable) season further into the summer and fall. Cosmos are one of my favorites for this purpose, but I’ve also been known to pop sunflower seeds all around the gardens — and this always yields later surprises.

Next week, the tool of the trade and getting things started. Keep growing.

Following up on my comments last week on being careful when you see the word “new” in a plant catalog. Roots and Rhizomes (not a recommended vendor) lists the Daylily (Hemerocallis) “Frans Hals” in their “new” list. Well, it may be new to them, but this daylily has been around since the 1950s. They also list Astilbe “Vision in Red” as new, even though its existence dates back nearly a decade.

Maybe Roots and Rhizomes needs to say “new to us” instead. Check out R&R’s reviews on davesgarden.com. Other vendors are guilty of this promotional vagary, as well.

Curated plant collections are being widely promoted in magazines and catalogs this year, so I tried to look at one called Flora Box (floraboxplants.com) that I noticed in Horticulture magazine. Several of the links were broken, or no longer supported, so it was difficult to delve into what was actually being offered. I think “curated” simply translates to “collections of plants that they have chosen because they feel these plants combine well and have good reputations.” My question is, who is doing the curating and what are their motives? One of the collections came from different vendors and were being shipped at different times of the year. Why would we want bulbs from Texas? Maybe the peonies from Swenson Gardens were nice choices, but why buy from a third party when you can buy directly from Swenson (swensongardens.com)? Maybe the collaboration between Horticulture and Garden Gate Magazines could work for Aunt Mable in Shawnee, Kansas, but for gardeners in the Hamptons, or the rest of Long Island? Don’t think so. Curate your own collections. It looks like most of these “curated” collections are little more than a gimmick.

Proven Winners has become a very successful marketing tool and brand. They’ve brought us a garden full of plants that we’d never seen, or used, until PW began to develop and market them. Early on, there were some missteps in their offerings of hydrangeas, but they have certainly learned from those mistakes. PW also has a few publications and an online presence that offers great gardening ideas and tips, and publishes several Gardener’s Idea Books that I think are great. You can get them in the mail, but you can also view these guides by visiting https://bit.ly/3fuEVuW. At the top of the opening page, you’ll also see tabs for their other helpful online tools and guides — but they do not sell seeds.

In last week’s column, we took a look at the magnificent and exotic woody vine ... 14 Mar 2022 by Andrew Messinger
×