Tracking Deer Can Be Helpful For Gardeners, Too - 27 East

Tracking Deer Can Be Helpful For Gardeners, Too 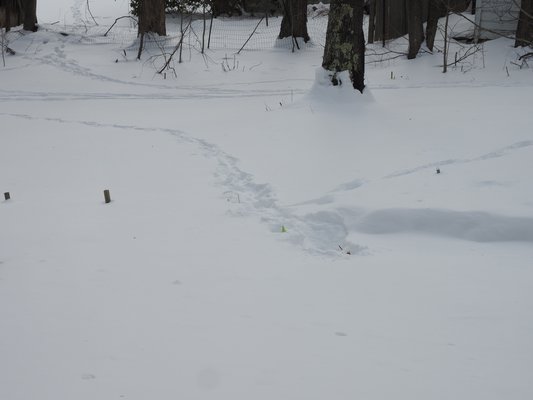 A little snowfall reveals deer ‘runs,’ or traveling paths, (background) that the deer take nearly every night. The vertical deviation in the center brought one deer to an area where Primula foliage was just inches below the snow. Were the deer smart enough to know that the nearly hidden green flag was a location clue? ANDREW MESSINGER OLYMPUS DIGITAL CAMERA 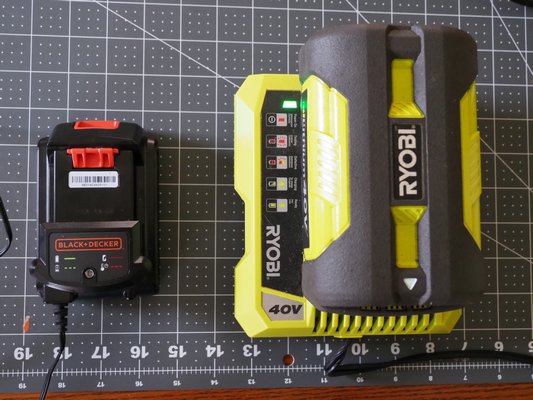 If you own battery-operated tools, the batteries need to be maintained during the winter by keeping them charged. Smart chargers like the one on the right for a line trimmer can diagnose issues and show charge levels. The smaller battery on the left is for a hedge trimmer and while not quite as smart this battery can show charge levels, a battery beyond recovery and a battery that’s too cold or hot to charge. ANDREW MESSINGER OLYMPUS DIGITAL CAMERA

With the dearth of snow on the East End this winter, it’s been hard to follow the deer tracks. Why is this important? Well, deer are creatures of habit, and hunters use this to their advantage—and so can gardeners.Deer will follow the same path day after day, month after month, and these paths are referred to as deer runs. Know where the deer runs are, and you can stake out a spot for better hunting odds.

But, for gardeners, knowing where these deer runs are can help in knowing where and what the deer will feed on, since they tend to browse on landscape plants near their runs.

At our upstate home, just an inch of snow on the ground clearly revealed the route network. The deer seem to follow a nightly path that takes them down from the mountain, across our neighbors’ yards and onto our property at the same point nearly every night. They circle the long perennial border, looking for snacks, then head across the front yard, past two magnolias, over to the shorter Japanese maples for a nibble and snip, then toward neighbor Nancy’s bird feeders.

Every year, I encircle the magnolias with deer fencing, but I got lazy last fall, and now there are no buds on the magnolias that were within the deer’s reach. I did, however, fence in most of the Japanese maples, so they got only some minor browse. But, late in the fall, I noticed dozens of “dropping” spots around the perennial border, where the deer had found a crown here and a sprout there to munch on.

Even with a foot of snow in late January, they seem to have found some spots where they simply nosed or dug down to find something to eat—but I can’t tell if it was hellebore foliage, which I think is a bit toxic, or Primula foliage that remained intact under the snow.

I did due diligence, though, and had an application of granular as well as foliar repellent on everything. But when it gets cold and the deer get hungry, there are times when they simply eat what they can find.

For me, it’s just another of the challenges of gardening.

I’ve been through all the gardening catalogs and placed my plant orders, but they sure did little to tempt me this year. Offerings of new perennials seemed quite thin, unless you want yet another dozen new varieties of Echinacea. Yes, there are a few new peonies, irises and hydrangeas, but no real standouts.

One new trend, though, is with shorter garden phlox. These are mostly the paniculata species, which we used to refer to as “tall garden phlox,” but the breeders seem to have lost the point. These were wonderful, tall flowering plants for beds and borders that gave us late summer blooms for the garden and the vase, to say nothing of the mild but magnificent scents. Now, though, the emphasis on the new varieties is to make them shorter, as short as 12 inches.

The good phlox news, though, is that the variety Fashionably Early Flamingo has done remarkably in our trial garden. With a habit similar to the paniculata’s, this is actually from the Carolina species. This is among the earliest flowering tall phlox varieties, and you’ll probably find it blooming out here in mid- to late June. This is a good month to six weeks earlier than other tall phlox.

But, wait, there’s even more. It seems to be incredibly mildew resistant—in our two years of trials, the plant hasn’t shown a spot of mildew. Even last summer, when all our other phlox were tinged with the telltale white fungi. There are two other varieties in this series that we’ll add to our trials this summer.

That’s the good news about this phlox. The bad news is that these tall phlox are like steak and lobster for groundhogs, deer and rabbits. They may get some protection from other plants in a dense border garden, but if you plant them in a cutting garden, or as specimens, put a wire or mesh fence around each plant until the buds are showing some color. They are much tastier early on, and once the flowers begin to develop, the critters seem to ignore them.

Remember how bitterly cold it was at the end of January? Then, on February 4, it was in the upper 50s, and the next day nearly as mild? Those are the days that result in the damage from what we call the freeze-thaw cycle—and those are the days that can heave plants right out of the ground. These are also the days that winter mulches can protect from this cycle and protect susceptible plants, like fall-planted perennials and young roses, from the winter ravages of rapid freezing followed by quick thaws.

But those teasingly warm days of early February got lots of us outside and itching to do some garden work. For the most part, DON’T. Just walking on the lawn just as it thaws will result in footprints in the sod (or mud) that will show up in the spring as ruts, or even brown spots.

And if you thought those few mild days were just the right time to get a wheelbarrow out and do some cleaning up or moving firewood from the stack across the lawn to the porch, DON’T. The softening ground with still-frozen soil below that can last well into March. This is the time to stay off the lawn. Let it be.

On the other hand, those days and the warm or at least mild ones to come are perfect for pruning your fruit trees. Be careful, though, since any ice a few inches below the soil can result in a quickly shifting ladder, resulting in a fall. Make sure of your footing, and, better yet, unless you have firm soil under foot, maybe limit your pruning to areas that you can reach by hand or with a pole pruner.

Getting seed and plant catalogs from nurseries you’ve never heard of before? Deals offering 50 percent off catalog prices, as long as you order before March 15? Well, the offers are too good to be true, and they’re playing you for a sucker.

Stick to nurseries and seed vendors that you know and trust. When in doubt, ask friends, or check out the company on Dave’s Garden, where you can check their ratings and experiences of other gardeners. You can start with this link: davesgarden.com/products/gwd.

If you’ve stored last year’s dahlias, cannas, tender bulbs or elephant ears, now’s the time to open up those boxes and bags to see how they’re doing. If there are signs of rot or fungus, you can cut out the damaged parts and hope for the best. Or you can order backups.

And it’s time for a battery check. If you took a wet cell battery out of your mower or tractor for the winter, now’s the time to give it an overnight trickle charge to keep the battery in great shape and ready for work. Lithium batteries from mowers, trimmers and edgers also should be checked and charged, then put back in a cool, dry spot (not the fridge or freezer).

Keep those spring dreams happening. The Philadelphia Flower Show is just a few weeks away.

And, of course, keep growing!