Using Old Technology, Reel Quiet Mowing Was Ahead Of Its Time - 27 East 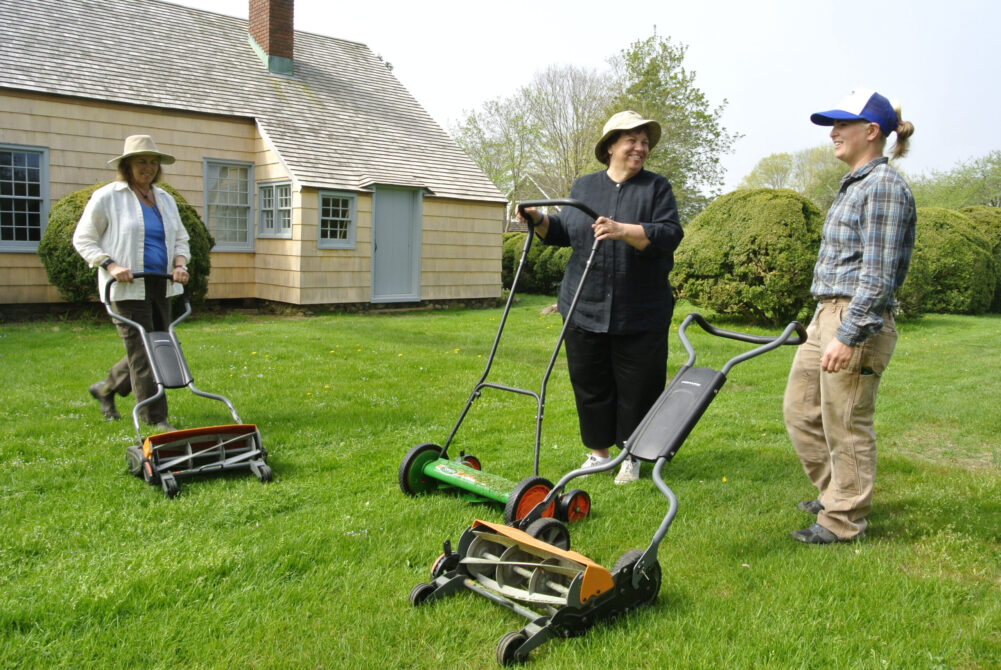 Hilary Woodward and Sally Van Allen and Emma Woodward of Reel Quite Mowing in 2015. 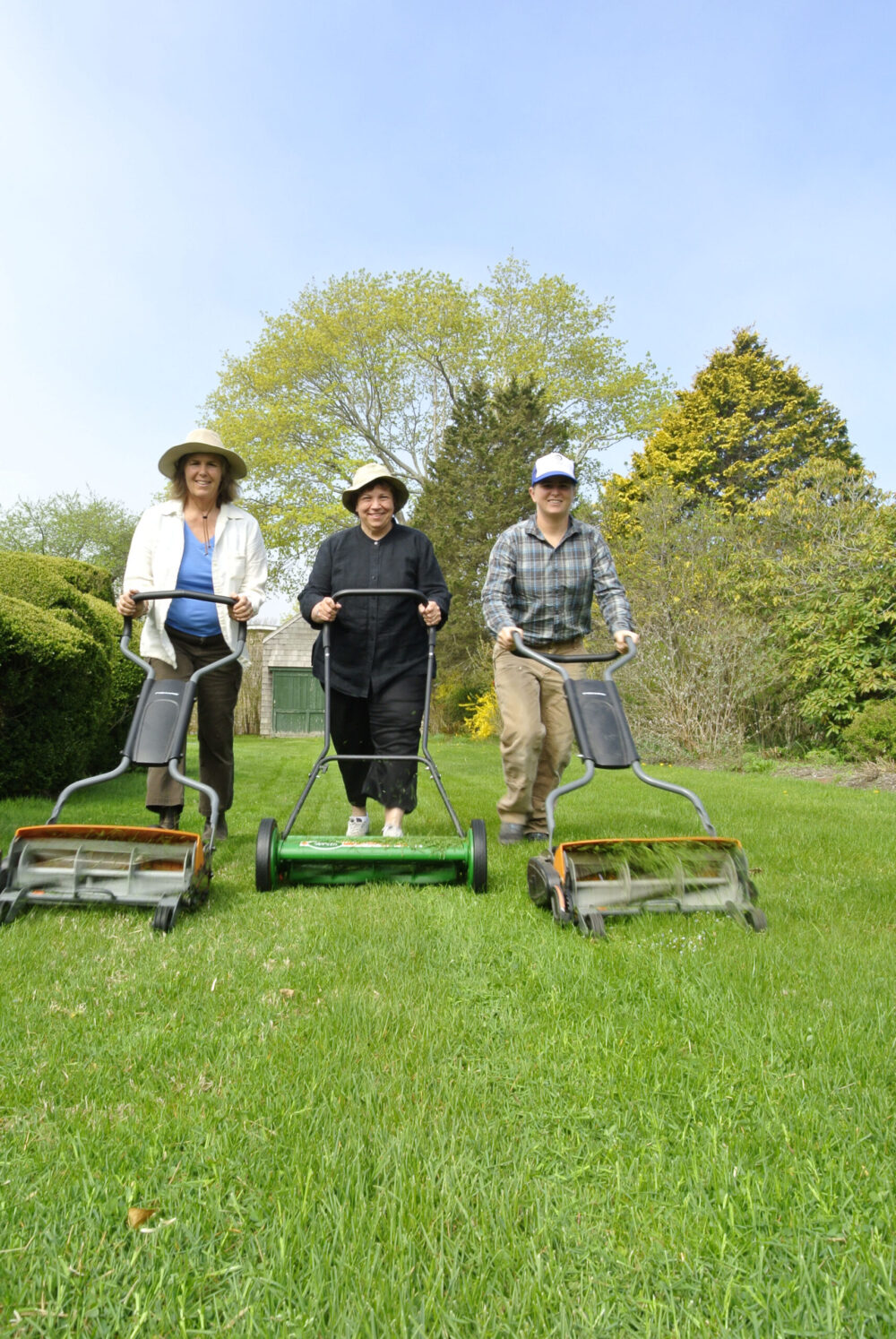 Hilary Woodward and Sally Van Allen and Emma Woodward of Reel Quite Mowing in 2015.

In recent years, one village after another on the South Fork has restricted or seasonally banned the use of gas-powered leaf blowers as residents fed up with the noise, dust and fumes that leaf blowers make have amplified their voices.

With ever-improving lithium battery technology making electric-powered leaf blowers and lawn mowers more viable alternatives to their noisier and polluting counterparts, village boards have responded to the call of residents who have been pleading for blower bans for years. Add to the blower bans the prohibitions against firing up gas-powered lawnmowers early in the morning, and South Fork residents who want to enjoy some peace and quiet at their homes now have the law on their side more than they ever have before.

Eight years ago, in an effort to show others that noisy, fossil fuel-powered equipment is unnecessary for lawn care and that there is a better way, Southampton residents Hilary Woodward and Sally Van Allen started their own lawn mowing business, Reel Quiet Mowing, using human-propelled reel mowers. It’s old technology — but their business was ahead of its time. The defunct lawn care company is just the kind of service homeowners are now looking for as they eschew clamorous mowers and blowers.

“We were just too way far ahead of the game,” Woodward said of Reel Quiet Mowing.

In 2014, Woodward approached Van Allen with the idea, and Van Allen was immediately on board. The pair had been friends for many years and their families’ relationship goes back more than a century.

“I went over to her house and said I have this idea for a mowing company, and she said, ‘That’s really great,’” Woodward recalled.

Van Allen became the business manager, getting things in line for them to be a bona fide business, taxes and all.

They grew the business to eight or nine clients, including the Southampton History Museum. The museum’s Halsey House & Garden on South Main Street was the largest property they serviced. “That took quite a bit of mowing,” Woodward said.

Woodward said her main hope was that somebody in one of the big landscaping businesses, with all of their machinery, would notice them and say, “Hey, that looks like an interesting idea,” and approach them. They would have been happy for a big business to take their concept and run with it.

But that never happened in the three summers the business was in operation, Woodward said.

Maybe the reason they went unnoticed is the fact their work was done quietly. The blaring machines of their competition was hard to miss.

“We’d be watching people mowing and blowing and doing all kinds of stuff — and it seemed like they always took longer than we did,” she said.

That meant wrapping up a job quickly while leaving behind clippings that return nutrients to the lawn as they decompose, saving on fertilizer costs and disposal costs. Clippings also help a lawn retain moisture and suppress weeds.

“If you’re doing it weekly, the grass clippings aren’t that big,” Woodward noted

Their mowers were simple in design but highly effective.

“We looked into the top-of-the-line push mowers,” she said. They settled on a Fiskars model with very sharp blades that never needed sharpening. “They were fantastic,” she added.

Reel Quiet Mowing did have an electric blower they used once in a blue moon to pile up leaves, Woodward said. But she added that they really liked raking and found it did not take much longer than using a blower.

She touted the great exercise they got while mowing and raking. “Everybody’s going to the gym,” she said. “Just get a rake out and rake your lawn.”

Still, after a couple of years, they ended their experiment.

“I think we stopped doing it because we were two women of a certain age,” Woodward said. “… The whole point was to try to make a point and to get somebody interested who was in the industry.”

They also hoped homeowners would notice them and tell their own landscapers to use quiet mowers and rakes rather than gas-powered equipment. However, those homeowners were rarely around while their landscapers were making noise.

“Most of the people who have their lawns mowed professionally are not really out here when all of that is happening,” she said. “They’re here on weekends. I don’t think that most of the mowing companies are working hard on weekends. I think they get it all done during the week so that the people can come out and enjoy a beautiful lawn. So I don’t think they’re aware of the noise and the environmental impact that all those machines have.”

In addition to the noise creating a nuisance, she said all the dust that’s kicked up can’t be good for the walkers going past either. She also worries about the workers who are exposed to the noise and gasoline fumes every day.

Woodward is still enthusiastic when she spots someone with a rake rather than a blower. She recalled a few years ago riding her bicycle down Hill Street when she noticed a man in front of a big white house raking: “So I stopped my bike and I jumped off of it and gave him a big bow. And I said, ‘I’m thrilled that you’re raking your lawn.’ And he said, ‘Yeah, I don’t know why people don’t do that.’”

A week later, she ran into the same man at an Upper East Side benefit for the history museum.

It turns out quietly raking instead of loudly blowing leaves and grass clippings affords community members an opportunity to get to know each other.

Woodward lives just north of Southampton Village with her husband, Eric, on a property they only mow once a year. She explained it was his decision to leave the property untamed, something she was hesitant about, having come from a manicured village lawn.

“I thought, ‘Oh my god, it’s like wild,’ and yet over 30 years of living there, I just so appreciate that,” she said. “We’ve left it natural, but one wouldn’t want to do that in the village. That’s a whole different ball game.”

She lives among many second homes where there always seems to be mowers and blowers going.

“I have a good friend who runs a mowing-blowing company. I would never want him to lose his income and his livelihood,” Woodward said. “But it seems like some of these people have no clue how often their lawns are being taken care of. When, in my mind, they don’t need to be taken care of constantly.”