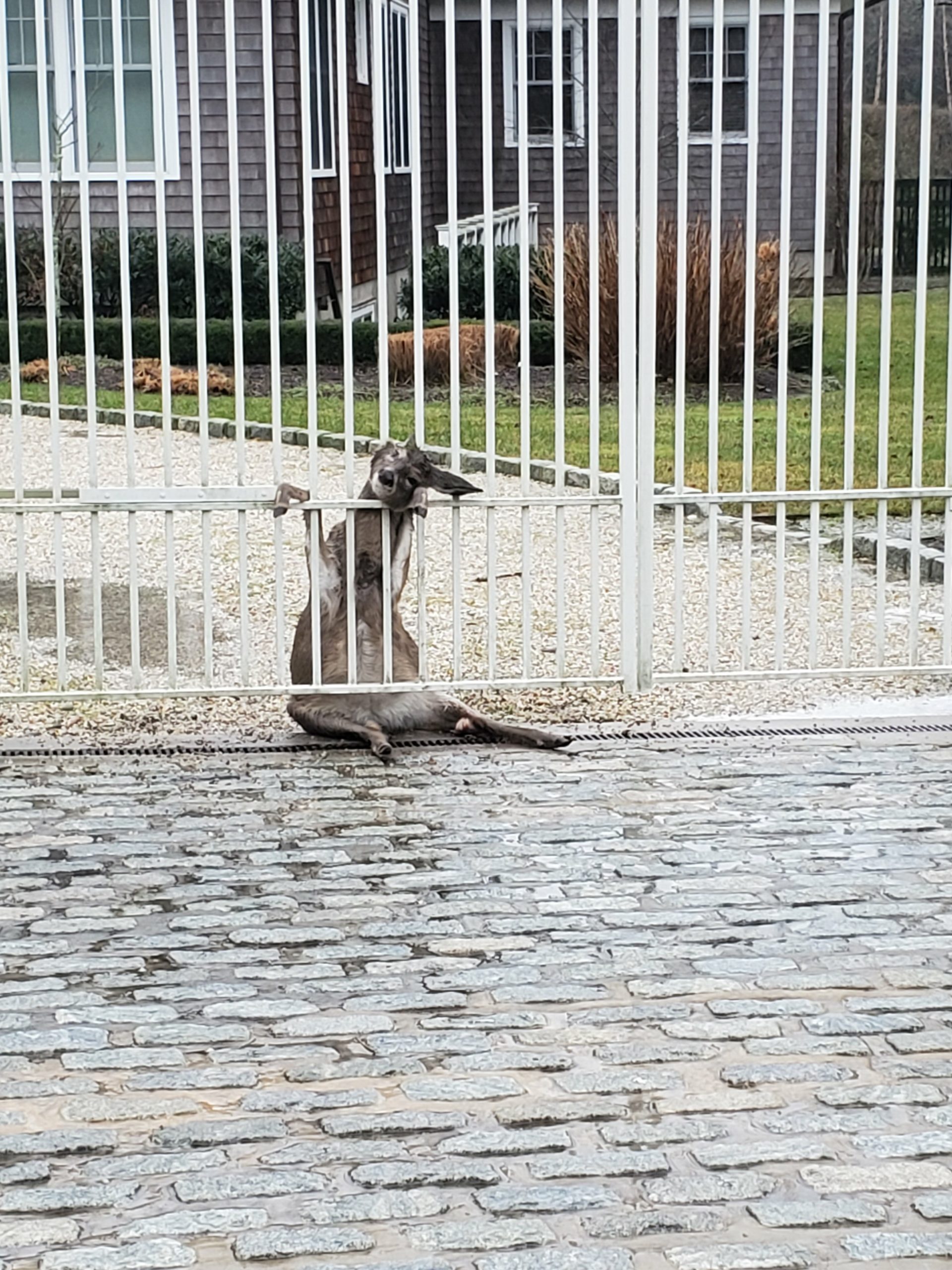 A deer stuck in a Southampton Village driveway gate in December. JAMES MULHOLLAND

Having worked in the field of wildlife rescue, removal, rehab and wildlife education for many years, I’d like to offer just a couple of observations that I think would benefit us all in regard to our most talked-about wildlife issue.

First, however, I’d like to ask a reasonable, simple, yet life-saving favor that will benefit both sides of the divide and the wildlife, a most glorious trifecta.

Every time I get a call to remove a deer from a barred entry gate, I promise myself I’m going to write this letter. After neglecting my promise for too long, I’d like to ask homeowners to consider the following: If you have a gate with bars spaced apart to allow the partial passage of a deer, I ask that you please take my following advice, or seek your own — but correct the issue as to not allow one more deer to die in such a horrific manner.

Deer that get trapped inside gated properties often force their way through the gate bars. Even more often, their entrails, shoulders or a single hip bone make it through, but the rest does not. This immobilizes the deer, which, if not found in time, often dies in one of these three ways: 1) slow death due to starvation; 2) flies lay eggs all over the trapped deer, and the maggots literally eat the animal alive; 3) they thrash about and break their own spine, then lie paralyzed and die, or they’re predated while still alive.

Either way, the homeowner still faces the task of removing the dead animal and cleaning the decomposed remains from the gate and the drive. And, believe me, it’s not easy.

How can this be avoided?

Might I suggest having gates installed with the bars closer together? Even better, install a skirt about 4 or 5 feet up from the bottom of the gate, either metal fencing or invisible Plexiglass. Something to keep the animal from passing through at all. Problem solved.

And while we’re on the topic of solving problems, might I suggest another? I did suggest this to the “Deer Management” … I mean, the “Wildlife Management Committee” years ago, but all I got was a blank stare.

I’m not being a smart-ass, but please let me explain the simple, common-sense scenario that poor management and planning have created.

Allowing properties to fence off their frontal boundaries from one side to the other, from property line to property line, creates a wall along the roadway that the houses use. This leaves only the shoulder area for the wildlife to congregate and use — and this is why we see so many live deer along our roadways, and dead deer on our roadways.

Add in the ever-shrinking habitat, and this creates pockets of large herds that create the facade of a population explosion. In fact, the deer populations haven’t changed much at all, but we know for a fact that the human population has more than quadrupled, along with the number of homes built over the past 20 years.

So, here is where common sense comes in. If every block had a designated wildlife corridor (10 to 15 feet wide) that ran from one road to the other, the deer would use that pathway to traverse rather than travel along the road. And if the deer used these corridors, they would no longer be hanging around the roadway shoulders, creating a hazard to both themselves and drivers. Everybody wins.

Then you can step it up a notch and create multiple corridors per block. Where each corridor crosses a road, there could be a lighted crosswalk, a speed bump or just a warning sign. The deer would maintain these corridors and actually hang within them. Folks wouldn’t see deer so much, that’s for sure.

We have a corridor on our property line, and it is used quite a bit. No deer has ever been hit on our road, and they practically live in there. A perfect example of how beneficial the corridors really are.

Over the course of his horticultural career, and in narrowing down the best gardens of ... 2 Feb 2020 by Brendan J. O’Reilly
Sign in to comment